We packed a lot in to our one-day trip to . After leaving Chirk Castle, it was a short drive to Chirk Aqueduct, located just three miles outside the town. Constructed by that master of engineering, Thomas Telford, Chirk Aqueduct was opened in 1801. It has 10 spans of 40 feet each, stands 70 feet high, is 710 feet long, is made of masonry and stone, and carries the across the River Ceiriog from to . 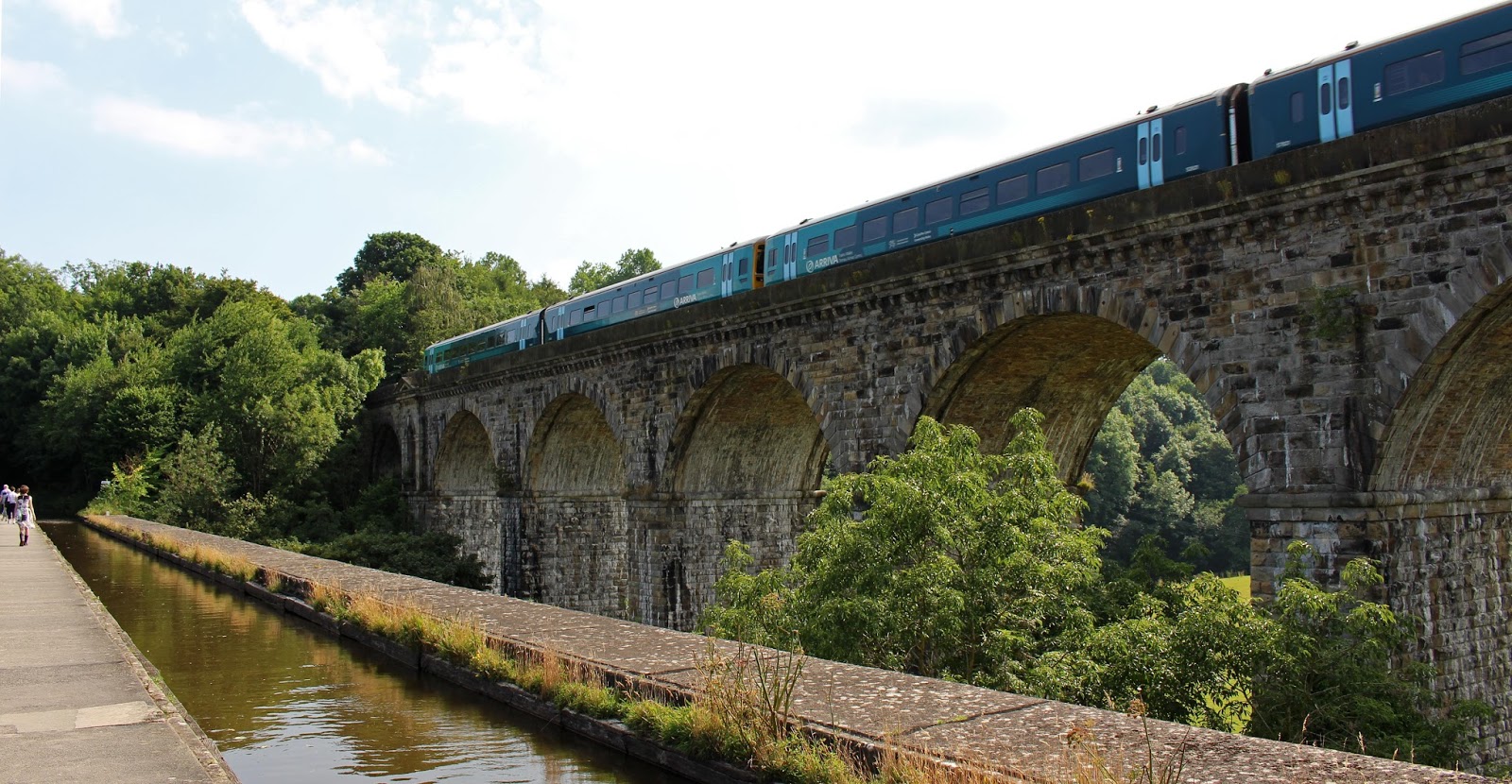 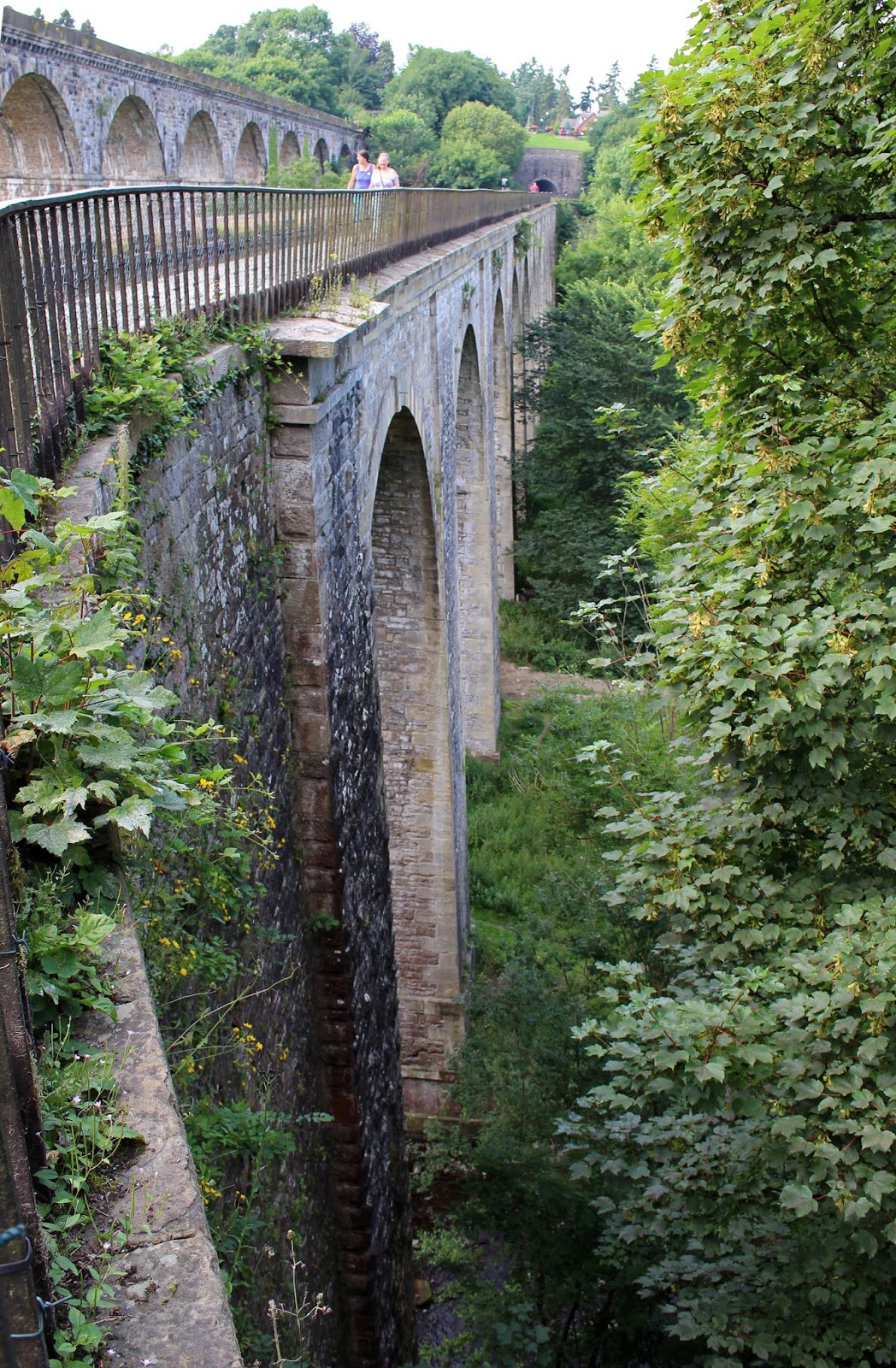 Beside it stands a railway viaduct, constructed both later and higher, apparently to suggest railway supremacy. Built between 1846 and 1848, Chirk Viaduct was the work of Scottish engineer Henry Robertson. The 100-foot-high stone structure has ten spans with round arches, and links Liverpool and the Wirral with and the south. As luck would have it, an English-bound train crossed over while we were there, so I managed to get a photo of the viaduct in use. I imagine the view from the train would be superb.


As you approach these two impressive feats of engineering from Chirk township, you can’t help but wonder at first where the water comes from. In fact, when you’re standing at the viewpoint, the canal emerges almost directly under your feet, from the 460-yard-long Chirk Tunnel, flowing out into a small basin before continuing across the aqueduct.

There is a footpath alongside the water channel on the aqueduct so, of course, we walked across it. Though I’m not particularly fond of heights, it wasn’t too scary. The footpath is quite wide, so you don’t feel like you will fall into the water on one side or need to grasp for dear life onto the hand rail on the other. We walked a bit further along the canal and found a boatman selling traditional painted narrowboat crafts from his boat/shop so did a wee spot of shopping (a mug and a fridge magnet for me, a jug for Sarah), then turned around and walked back across the aqueduct just as some boats were coming over – perfect timing for photos. 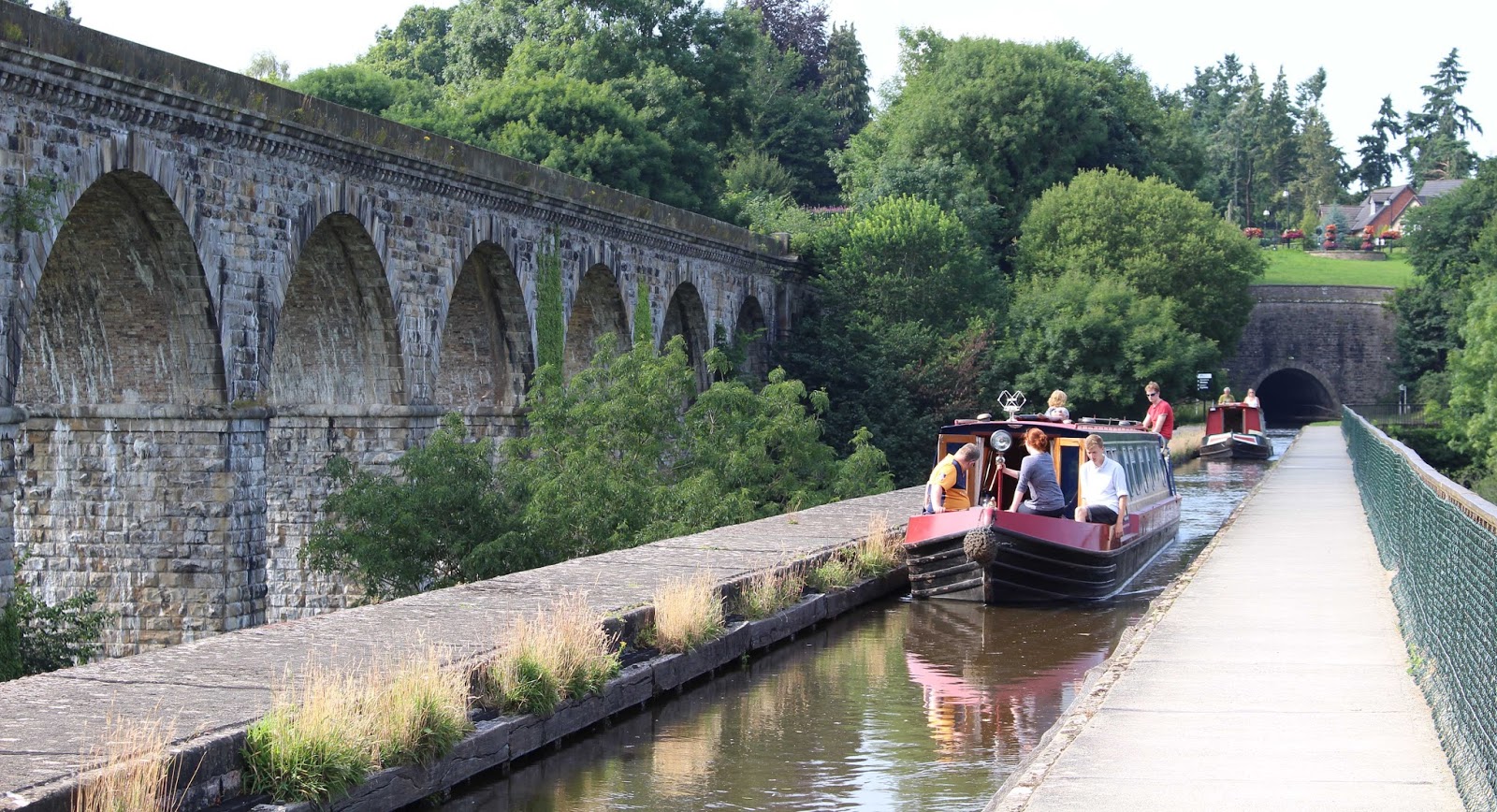 The 46-mile-long is one of the most popular in for recreational craft as we soon discovered, as more boats were coming through the tunnel when we got back to the other side. It takes the canal boats approximately 12 minutes to sail slowly through Chirk tunnel, which also has a footpath running along next to the water. So, though it was a trifle damp here and there, we walked through the tunnel to the other end and then back along the roadway at the top.

At this stage we realised, from looking at a local signboard and map, that we were not actually at the aqueduct we had particularly come to see so we set off in search of that. Pontcysyllte is Chirk’s big brother, both longer and much higher. Another of Thomas Telford’s constructions, it is 1007 feet long, rises 127 feet over the River Dee, has 18 piers made of local stone, and took 10 years to build, opening in 1805. It was one of the earliest aqueducts to use a cast iron trough, which is 11 feet 10 inches wide and 5 feet 3 inches deep. Fifty million litres of water cross the each day to supply drinking water to south . 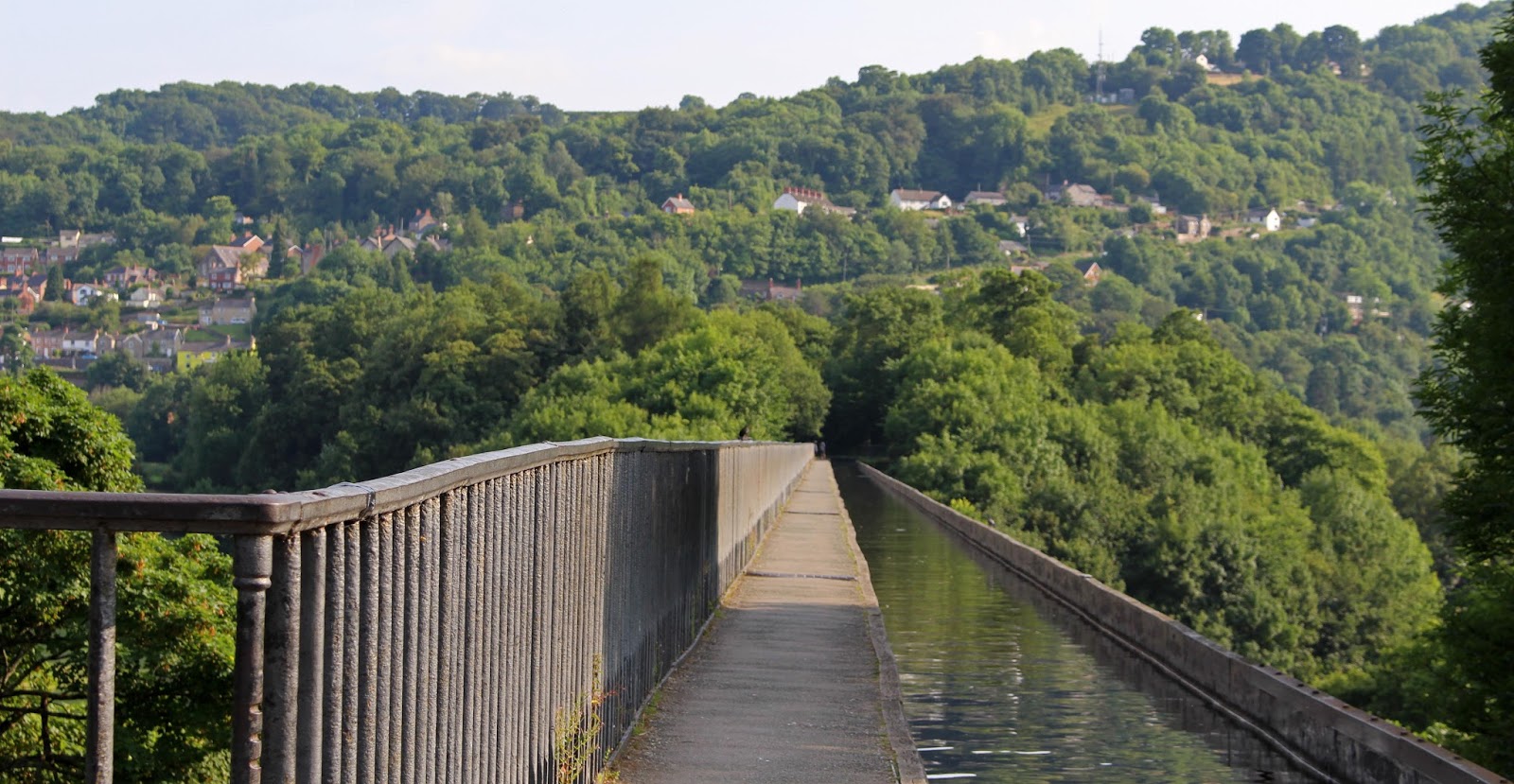 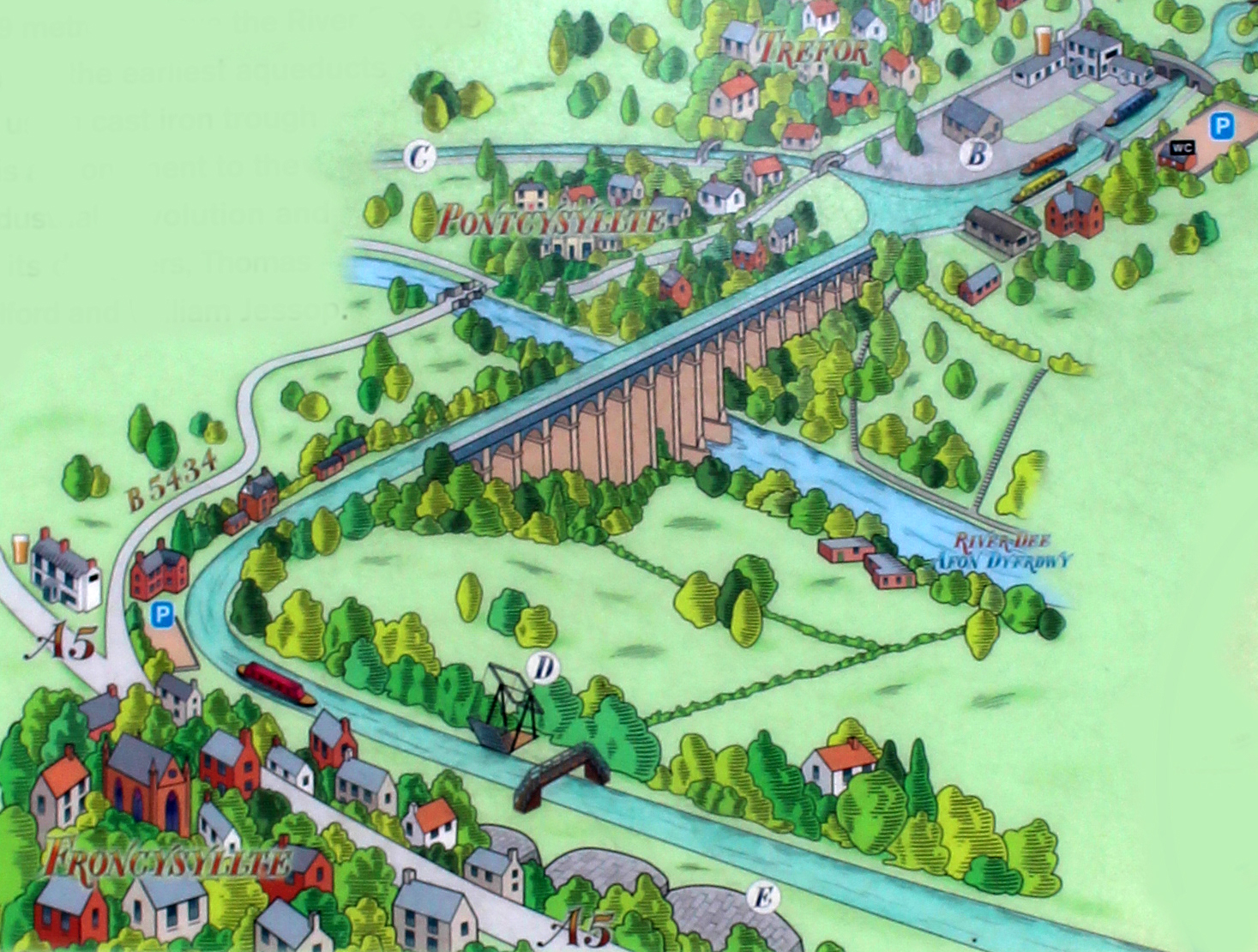 The Pontcysyllte Aqueduct was added to the World Heritage List in 2009, as a site of Outstanding Universal Value. It is the highest navigable aqueduct ever built and is recognised internationally as a masterpiece of civil engineering, and it is more than a little scary to walk across. This is partly because its footpath is much narrower than Chirk’s but also it is 30 feet taller and the wind flowing through the valley can reach quite high speeds.

Still, walk across we did! I would have stopped for photos but Sarah is much more afraid of heights than me and was freaking out just a little at the prospect. So, with dogged determination, we walked straight across, eyes looking straight ahead not down. It was mind boggling and heart thumping and knee knivering all at the same time – scary but also exhilarating!
However, Sarah definitely didn’t want to retrace our steps, and we did want to get photos from down in the valley below so we headed down the road towards a narrow old bridge that crosses the River Dee at the bottom. From there, we had a splendid view of the aqueduct and of boats going across, before walking back up the other side of the valley to the small settlement of Trevor where the car was parked and where there is a small marina.

By this time it was 7pm. We were hot and needing refreshment as our delicious lunch at seemed but a distant memory. So we enjoyed our dinner – appropriately enough I had a Welsh lamb burger – on the benches outside a pub by the canal side, before heading home, hot and weary but full of the joys of a wonderful day.