Not being English, I didn’t understand the significance of Shaftesbury’s Gold Hill. A quick google revealed that Shaftesbury had been founded as a fortified settlement (a burgh) way back in 880 by King Alfred the Great, and that the picture-postcard cottages of Gold Hill had been built around the 17th century. 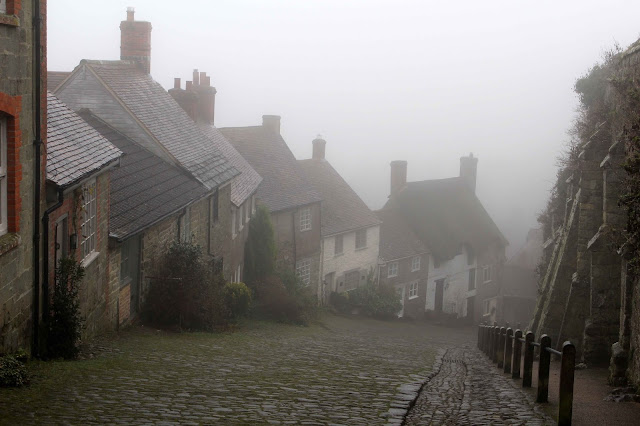 But it was bread-making firm Hovis and now-world-famous film director Ridley Scott who forever implanted Gold Hill in the psyche of the English when they chose this location for their 1973 television advertisement. The ad (you can see it here) was subsequently voted ‘ favourite television ad’, and people’s visions of Shaftesbury were forever linked with the image of that young boy pushing his bicycle up Gold Hill. 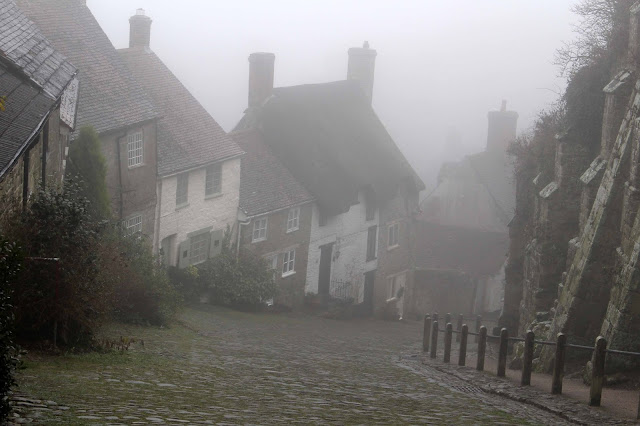 Gold Hill has also featured in episodes of those classic English comedies The Two Ronnies and Only Fools and Horses, in films, and on the covers of books – heck, it even has its own website!

As you can see, the apparently magnificent views of the beautiful countryside were somewhat obscured on the day I visited but I rather liked the evocative atmosphere created by the fog. It gave more of a sense of the hill’s long history.

My guide promised me a giant Hovis loaf but it was nowhere to be seen – apparently it was getting a bit mouldy around the edges and needed re-crusting, as this article explains.
Posted by sconzani at 19:00 No comments:

A glimpse of Sherborne Abbey

After a wander along, and in and out of the wonderful variety of shops in the main street of Sherborne, we detoured along a side street for a look at Sherborne Abbey. It was late in the day and the building was due to close in just fifteen minutes’ time, but we were able to have a quick look. 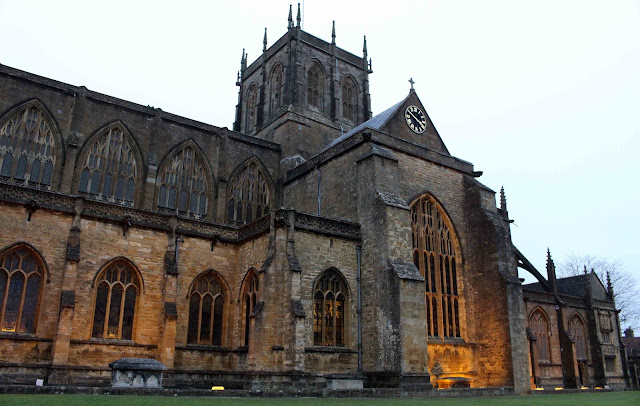 I was immediately spellbound! My eyes were constantly drawn upwards to the incredible ceiling, with its superb fan vaulting that looks for all the world like gigantic stylised branching trees, and which, I was amazed to learn, had been built in the 15th century, completed around 1490. 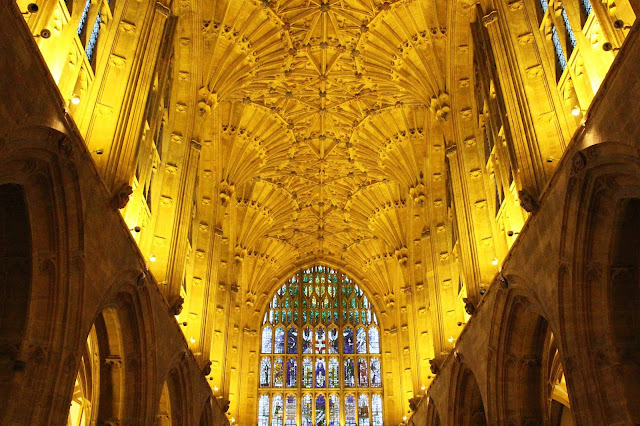 I’ve since read that there are many other noteworthy features to be seen and admired so I simply must go back for another visit to the abbey when next I am in Dorset. In the meantime though, those ceilings ... 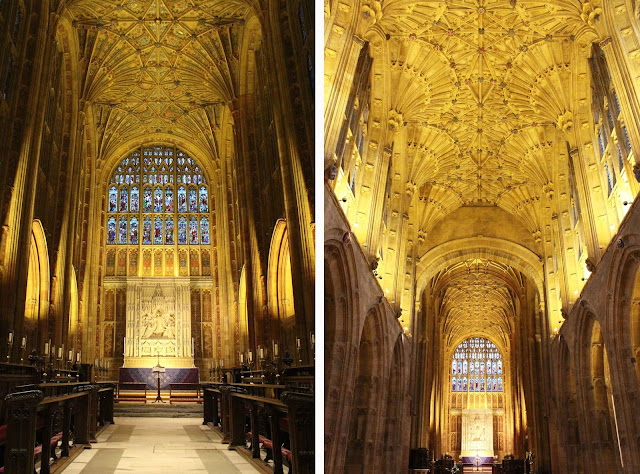 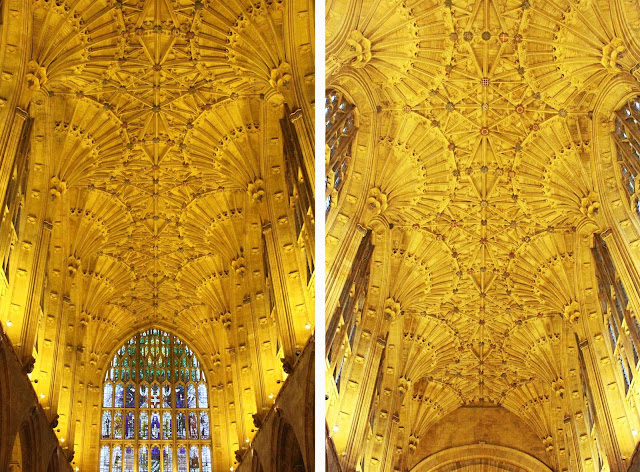 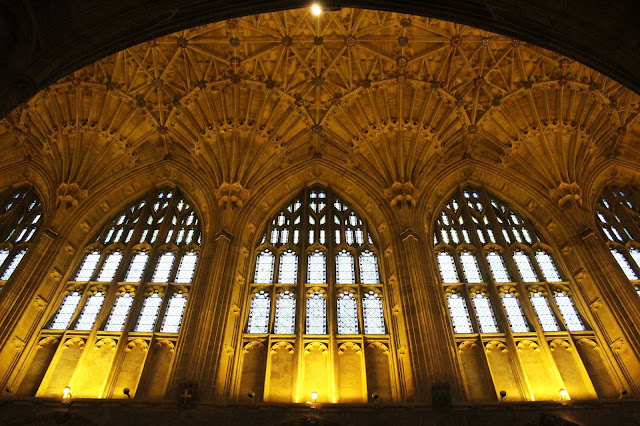 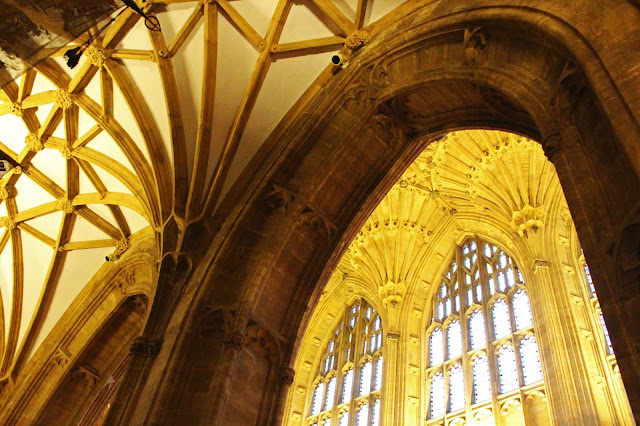 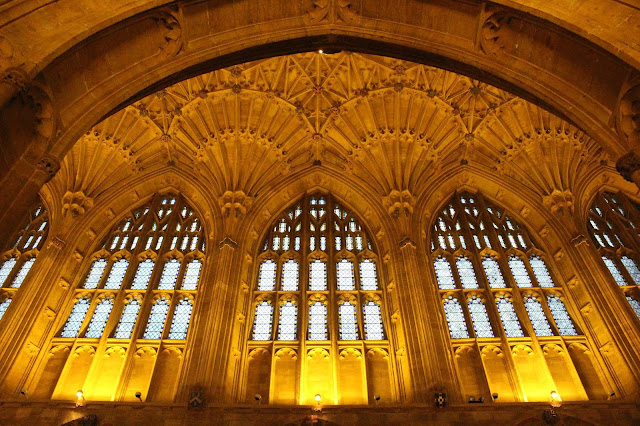 Posted by sconzani at 12:22 No comments:

You’ve got to wonder at the mind-set of someone who creates a 180-foot-high figure of a naked, aroused man on a hillside. 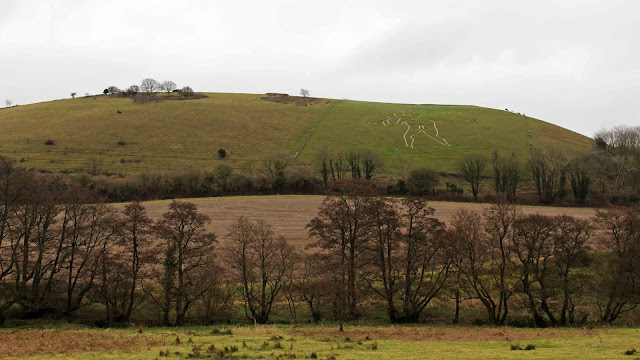 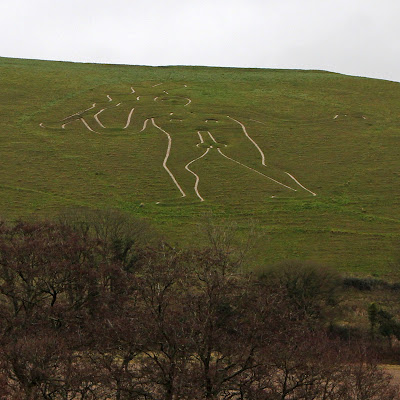 Now, you might well be thinking ‘But surely it’s an ancient fertility symbol?” Well, the answer is that no one knows for sure.

There is no mention of the Cerne Abbas Giant in any historic record until an entry was made in 1694 in the church warden’s account book for St Mary’s Church in Cerne Abbas, which states that three shillings had been paid out for ‘repairing ye Giant’.

As the figure’s outline is actually formed by means of a one-foot-wide by one-foot-deep trench cut into the underlying chalk and in-filled with more chalk, presumably the three shillings was for re-chalking.

Of course, though almost certainly not ancient, it could still be a depiction of a fertility symbol but what, then, is the reason for the 120-foot-high club? 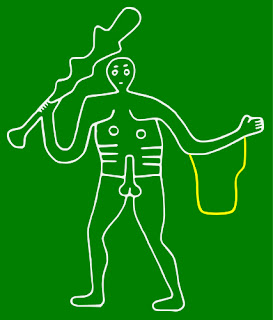 Interestingly, it is that very weapon that has led to speculation that the figure is, in fact, the Roman hero Hercules, who was often depicted naked, wielding a club in his right hand. As well as the club, scientific tests have revealed that the Giant used to have something draped over his left arm, though this chalk trench has since been grassed over. You may recall that the first labour of Hercules was to kill the lion that was terrorising the countryside around so Hercules was traditionally portrayed with the skin of the Nemean lion draped over his left shoulder.

(The image at right, showing the layout of the Cerne Abbas Giant with the obliterated line [in yellow], was created by Angelus, and was sourced via Wikimedia Commons.)

So, the Cerne Abbas Giant may well depict Hercules but the next question, naturally enough, is who decided to carve his outline on the hillside? Again, no one knows for sure.

One theory is that it was the work of the monks of the Benedictine Abbey at Cerne – a strange thing for monks to do, you might well think, but there is also a gigantic figure on the hillside close to the former Benedictine Priory at Wilmington in Sussex (you can see more about the Long Man of Wilmington in an earlier blog post).

The truth is that, unless some previously unknown historic record comes to light or some archaeological evidence is unearthed, we will never know who created the Giant or why. And I think I prefer it that way. Let him keep his mystery! 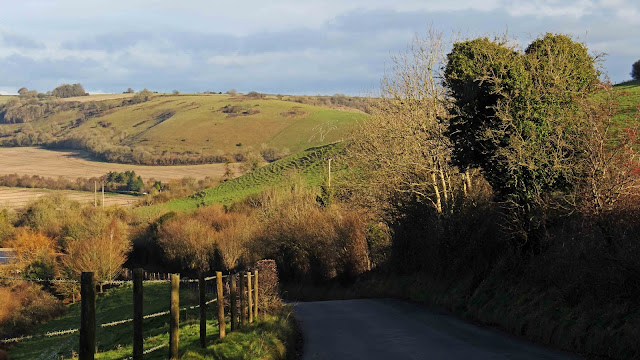 Posted by sconzani at 19:34 No comments:

Though I’m not a religious person, one of the highlights of my Christmas holiday, staying with my friend Sarah in , was the Christmas Carol Service we attended at Salisbury Cathedral. 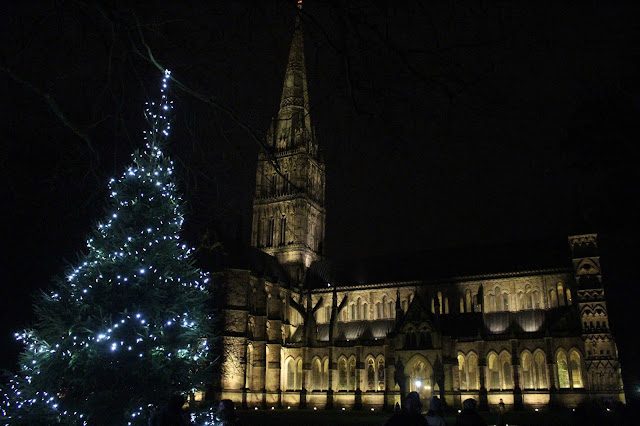 The Cathedral is an extraordinary building and was beautifully decorated for Christmas, with candles large and tealight-size lining the aisles. (I do wish they’d turned off, or at least dimmed, the main lights so we could’ve enjoyed the atmosphere with just the candles, though.) 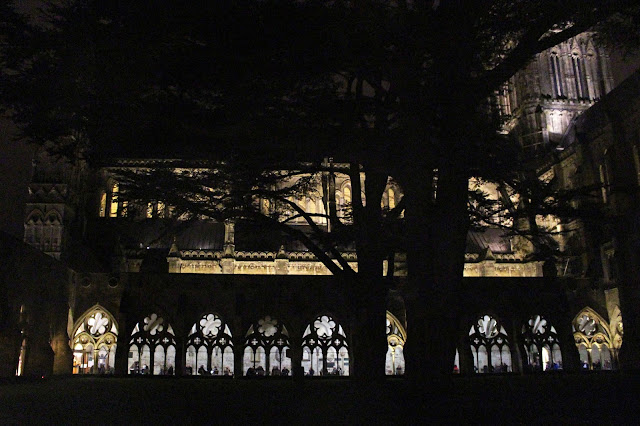 We had to queue for an hour in the cloisters to make sure we got a seat – the place was full to bursting, and then sit inside for another hour before the service started but it was definitely worth the wait. 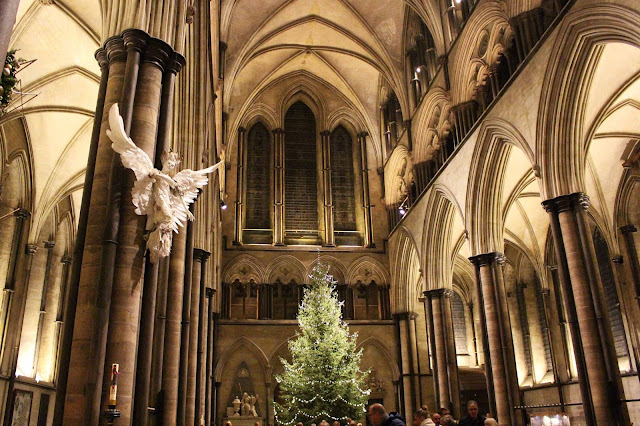 Though it was interesting to observe the process, I admit I ignored most of the religious part of the service. Sarah and I were there for the singing, though as we both had bad colds, the sounds we uttered were more like squawking and shrieking than anything remotely resembling singing (I even apologised to the man in front of me at the end of the service!). 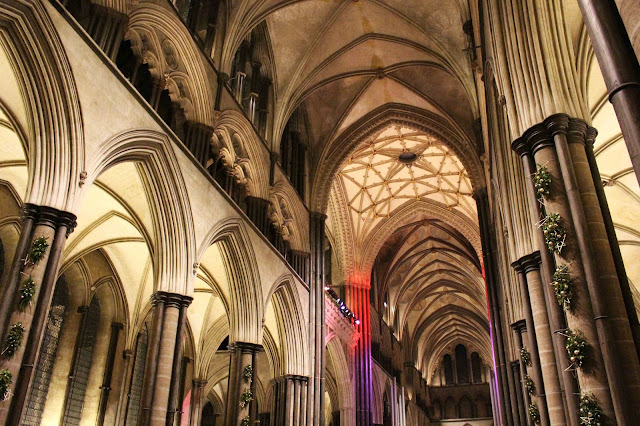 (If you’re interested in seeing more of this stunning building, I blogged about my previous visit early in 2017, the cathedral by day here and by night here.)
Posted by sconzani at 20:32 No comments: