My eagle-eyed map-loving windmill-fan friend Jill can spot a windmill symbol on a map a mile away. Unfortunately, I didn’t show her the OS map until after our walk. Fortunately, the location of this particular windmill symbol is just a short distance from one of my regular walking routes so I added it on to my next visit. 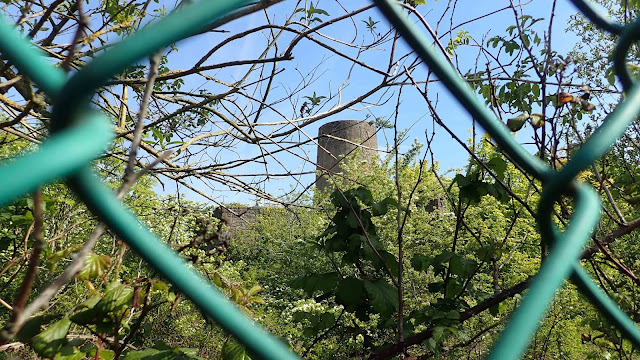 Fortunately, too, Jill didn’t miss much, as little can now be seen of the windmill, fenced off as it is behind high concrete posts strung with teal-plastic-covered wire netting and untended trees and shrubs. Though considered important enough to be Grade II listed and included on the Vale of Glamorgan’s own report of ‘County Treasures’, this important piece of Glamorgan’s industrial heritage has been badly neglected and is crumbling away. 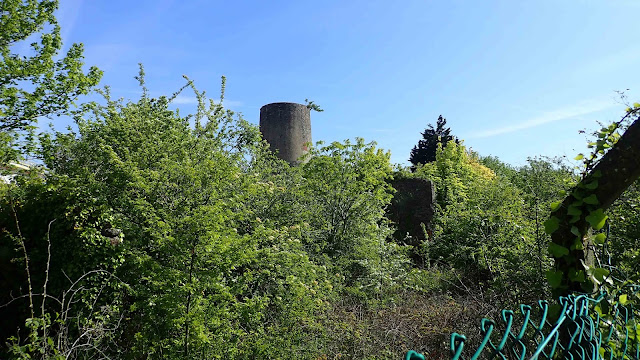 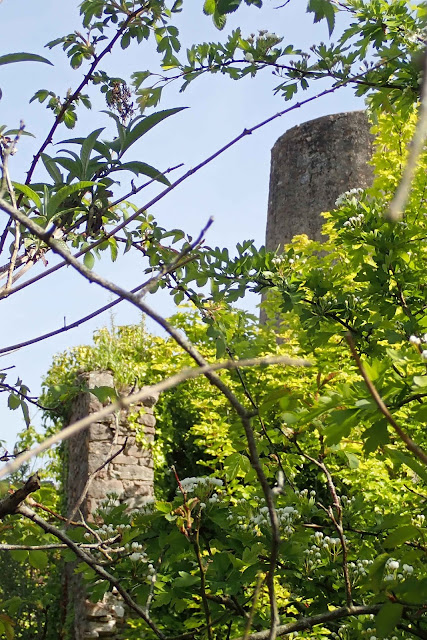 The British Listed Buildings websiteprovides the following history of the windmill:

Hayes Farm was a model farm built 1813 at the end of the Napoleonic Wars by Evan Thomas of Llwynmadog Estate, Brecknockshire (1778-1832). Thomas bought the manor of Sully in 1812 and modernised the agriculture of the area according to best practice of the period. He brought together 7 farms into 2 model complexes managed by bailiffs: Cog Farm and Hayes Farm. The farmers were re-housed, field sizes increased, and facilities improved. Unusually for farms of the day, Hayes and possibly Cog had their own windmills to grind corn. Edward Harrie and William Stoddard are recorded as millers from 1821-28. The mill was of the revolving cap type and was later enhanced by horse walk and gearing, an oil engine installed c1902. The surrounding farm land was sold for industrial development in 1947 and the farm closed in 1950s. 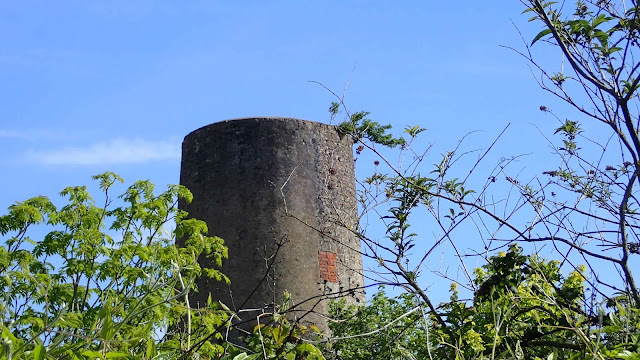 And here is their description of the treasures of stone and metal, hidden away behind all that greenery:

Exterior
A stone tower mill with attached granary and barn. The windmill tower is of coursed rubble limestone, with patches of render; the cap is missing. There are iron joists of a former gantry at 2 thirds height, with a blocked access on the north side. Two windows, one above the other, are below this on the west side, and one and a doorway on the east. On the south, a door opens at first floor level into the granary.
The granary and barn form a long rectangular range, now roofless, of rubble stone with red brick dressings, mostly cambered-arched openings. Tall round -headed threshing arches opposite one another towards the centre. The building formerly had 2 floors, with a granary to the west and barn to the east. Lower level extensions were at each end, with cartsheds at right angles. Ruins of other buildings stand to the south and west, single storey range to W. The farmhouse is on the opposite side of .
Interior
Inside the tower the frame retains 2 pairs of stones and stone nuts. The drive post is complete with wallower and spur wheel. Another drive passes through the wall.

The Hayes Farm windmill is the only windmill in south where there are still parts of the original machinery in situ yet, if nothing is done to maintain and conserve it, that machinery may soon be covered by the mill's collapsed rubble. Such a shame! 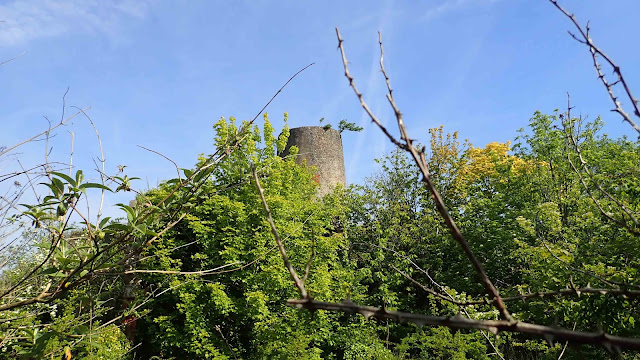 Posted by sconzani at 10:31 No comments: