After two nights at Todra Gorge, it was back on the road, with quite a long travel day but plenty of stops to entertain us and a need to rehydrate often, as the temperatures were consistently in the 40s now that we were in southern . 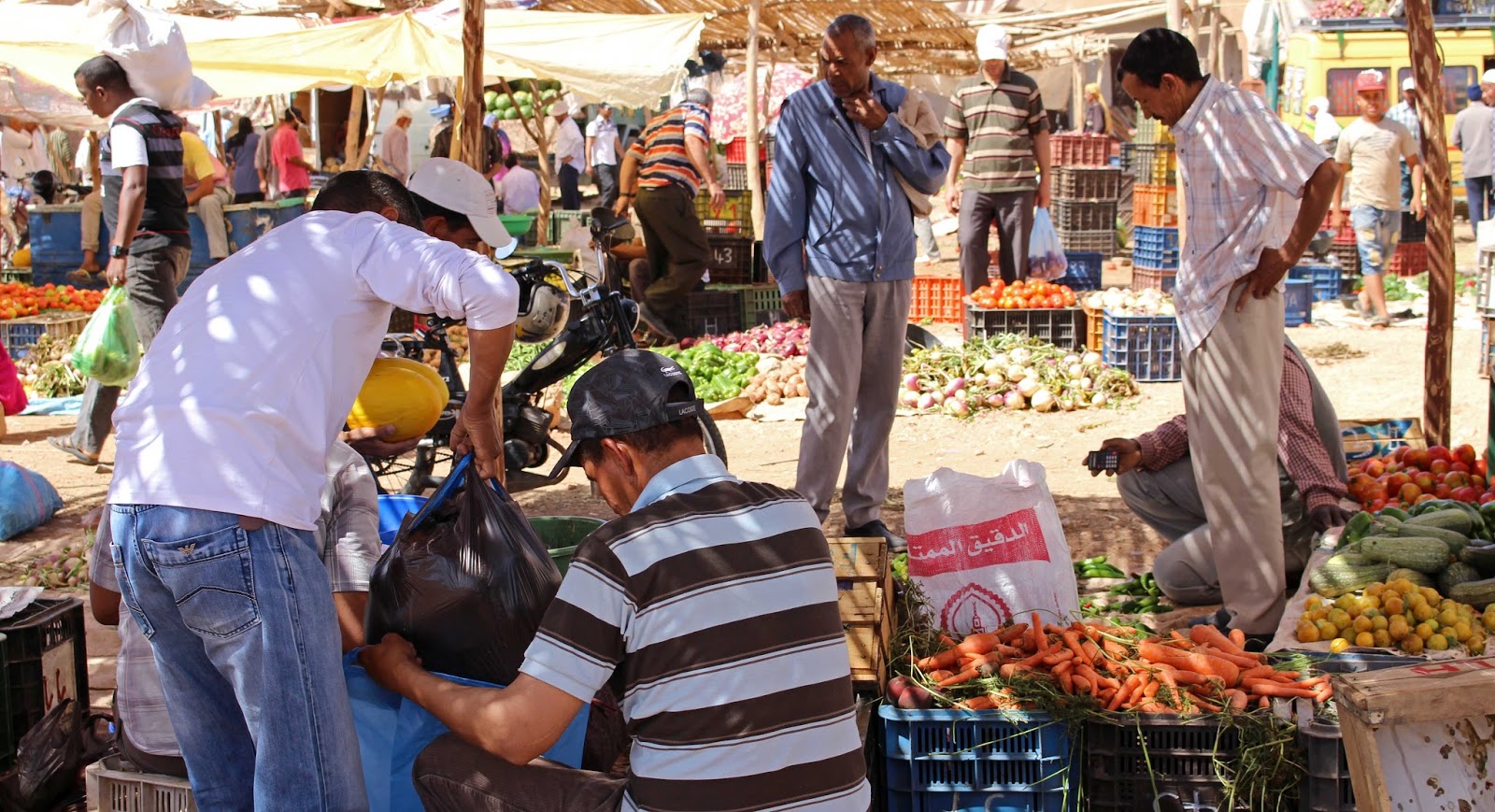 We left the Gorge at 8.30am and made our first stop at Tinghir for a short wander around the local market. Most towns have a weekly market where everyone buys and sells, everything from fresh fruit and vegetables to bulk grains, clothes and all manner of strange bits and pieces. As our guide Issam explained, there’s a different method of recycling here – everything is offered for sale and someone will find a use for everything. 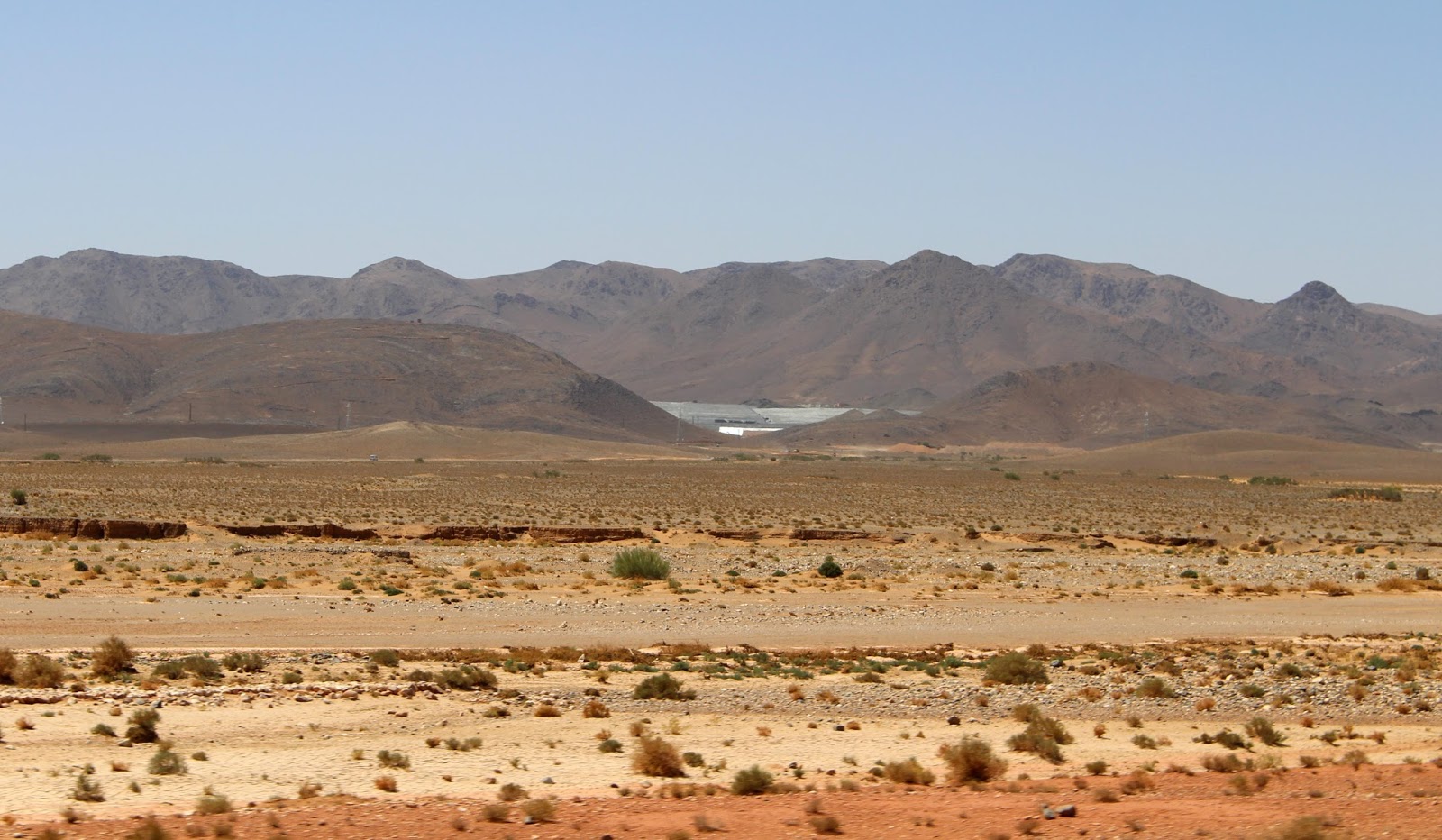 As we continued, we drove along a plateau with the range on our left and the Ante High Atlas mountains on our right. It was an impressive landscape and, at one point, we could see a huge grey-coloured scar on the mountainside off to the left. It was the largest silver mine in , where the silver sits right on the surface of the earth waiting to be dynamited and trucked away. 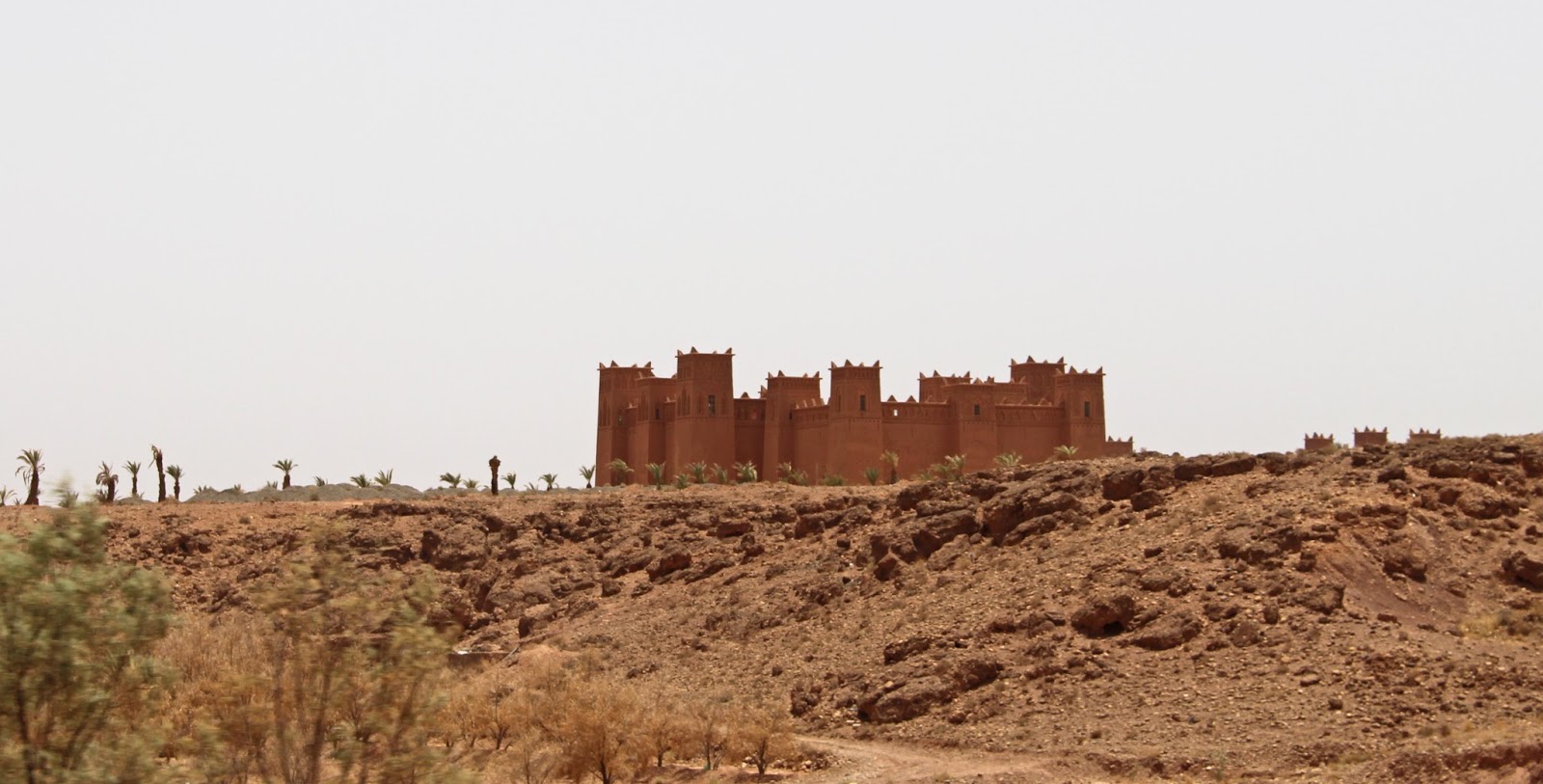 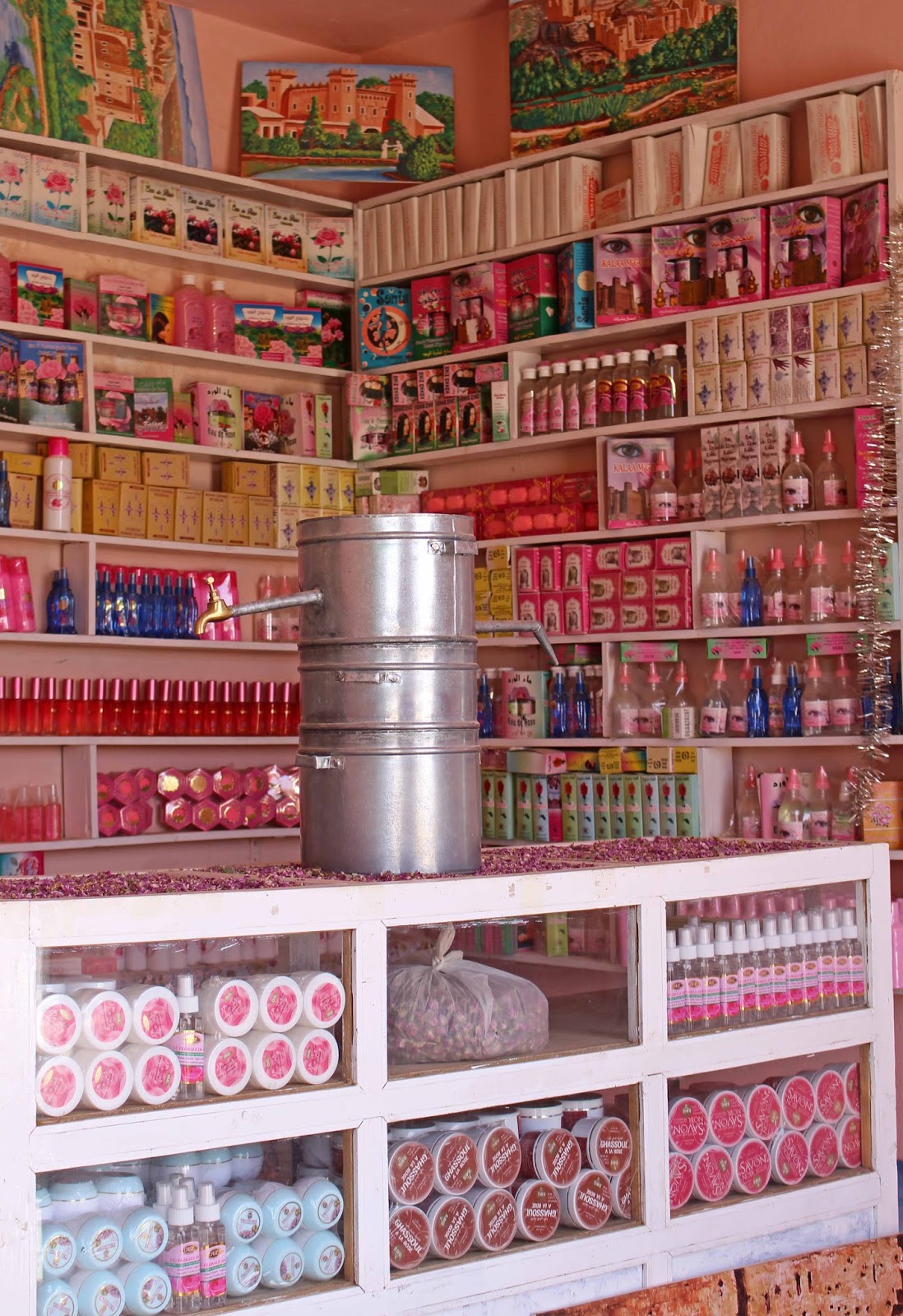 As we passed another gorge similar to Todra, we discovered we were on the Road of One Thousand Kasbahs. A Kasbah is a fortified house, characterised by four towered corners, which, in times past, would have been occupied by a local warlord. Many of the older Kasbahs are decaying ruins, collapsing over time due to weathering by wind and water but, fortunately, the style has been maintained – and even expanded on – in some of the more modern constructions.

We stopped briefly for refreshments at Kelaat M’Gouna, the rose capital of . The harvest of the all-pink roses takes place in April/May each year and culminates in a huge celebratory festival. All types of products are produced from the roses, like the rose water used in cooking and to make ointments and lotions to beautify the skin. I might have bought something if all the products hadn’t been a rather garish pink colour.

Our lunch stop was at Ouarzazate, the movie capital of . It’s a prosperous city, where the locals earn good money catering to the film crews and actors, building movie sets, and acting as extras. The Moroccan government encourages the business through financial concessions and the local authorities also do their best to co-operate with the film companies. We checked out the outside of the local movie museum, though didn’t go in, and drove past the Atlas Corporation studios and, though we didn’t stop for the tour, we could see some of the larger sets as we passed, including the ‘city’ in front of which The Kingdom of Heaven was filmed.

And our movie experience didn’t there. When we reached our overnight hotel at Ait Benhaddou and walked through to the patio at the back of the hotel, our view was of the Ksar that has been used as a backdrop in movies like Lawrence of Arabia (1961) and The Man Who Would Be King (1975), and more recently, Russell Crowe’s Gladiator and Prince of Persia. 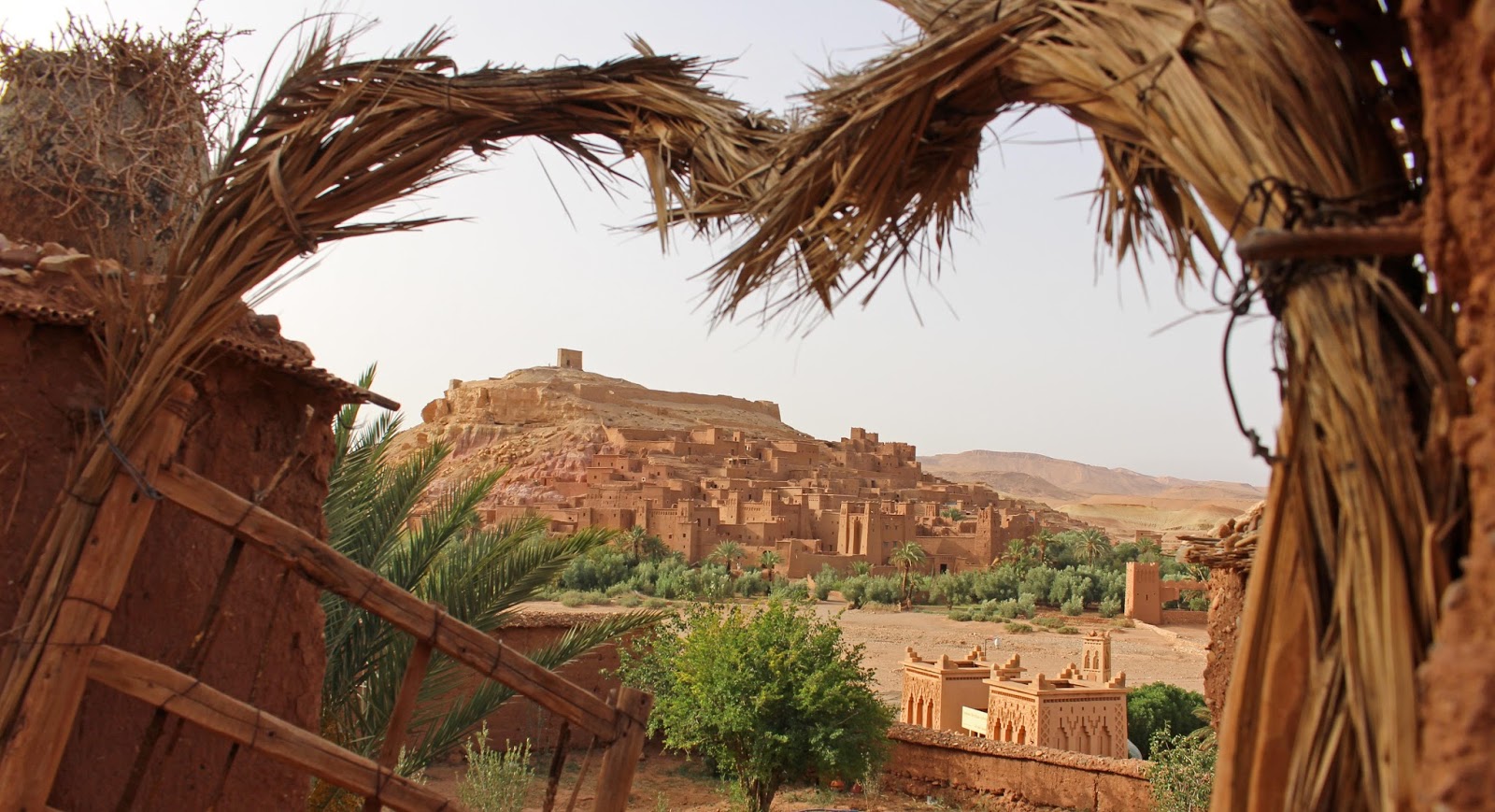 Once we had settled in to our rooms, Issam took us on a stroll around this fabulous World Heritage site, dating from the early 18th century – though the granary building on top of the hill is thought to be even older, and it really was like walking back in time. The mud-brick buildings, the narrow alleys that twisted and turned, the crumbling walls, the magnificent views from the top – it was all amazing and I would have loved longer to explore.

Our dinner that night was served on the rooftop patio of our hotel overlooking the Ksar – a magical setting in which to end our day. 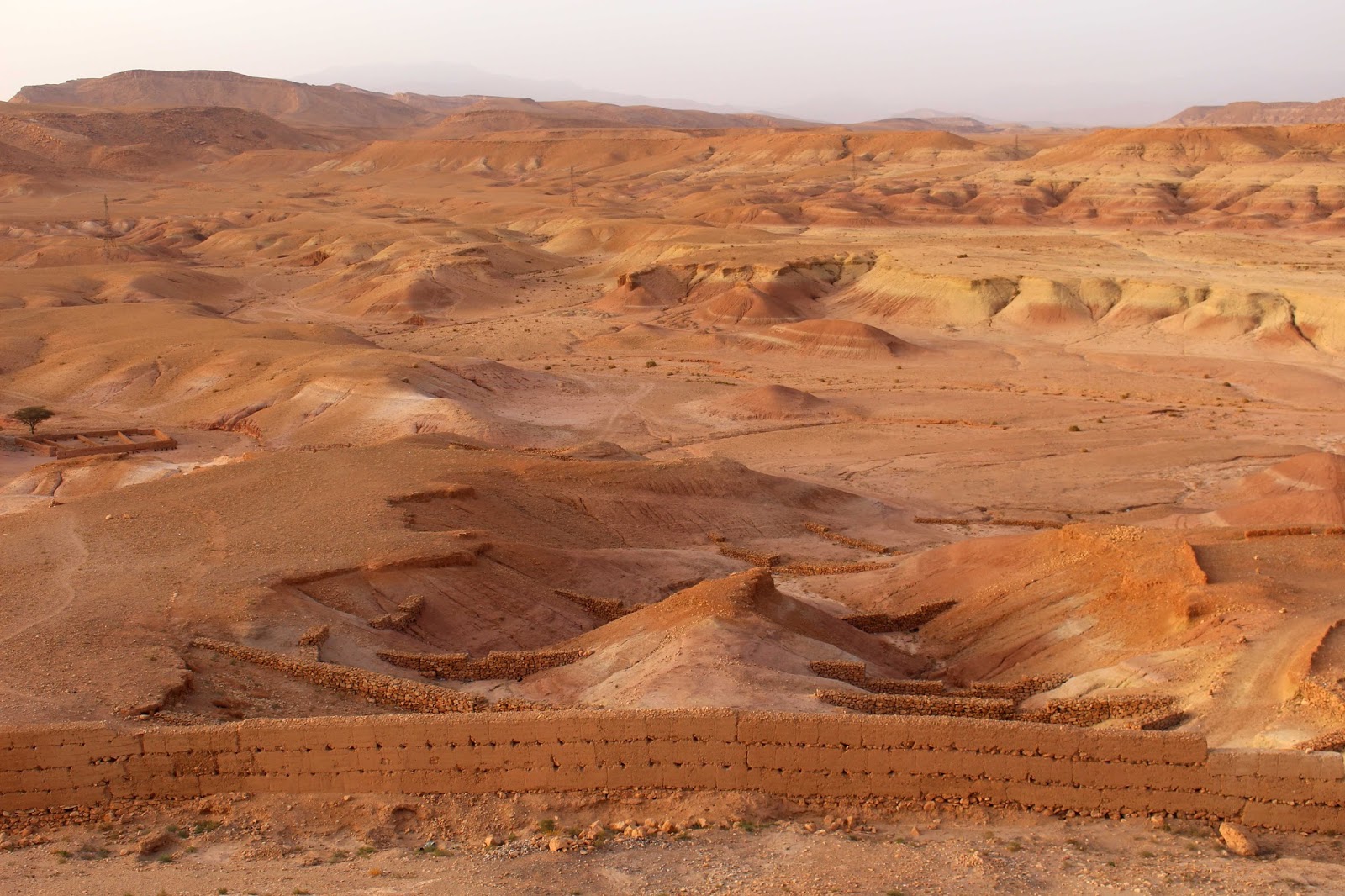 Posted by sconzani at 16:09 No comments:

I was up at 5.30am to watch the sun rise over the – a serene sight, to be sure. When everyone was compos mentis, we clambered aboard our ships of the desert for the one-hour trek back to civilisation, old hands now at riding camels up and down the dunes. Breakfast followed and teeth-brushing but there was no time for showers and it was hot in the van that day, so the smell of our camels lingered a little longer than expected. 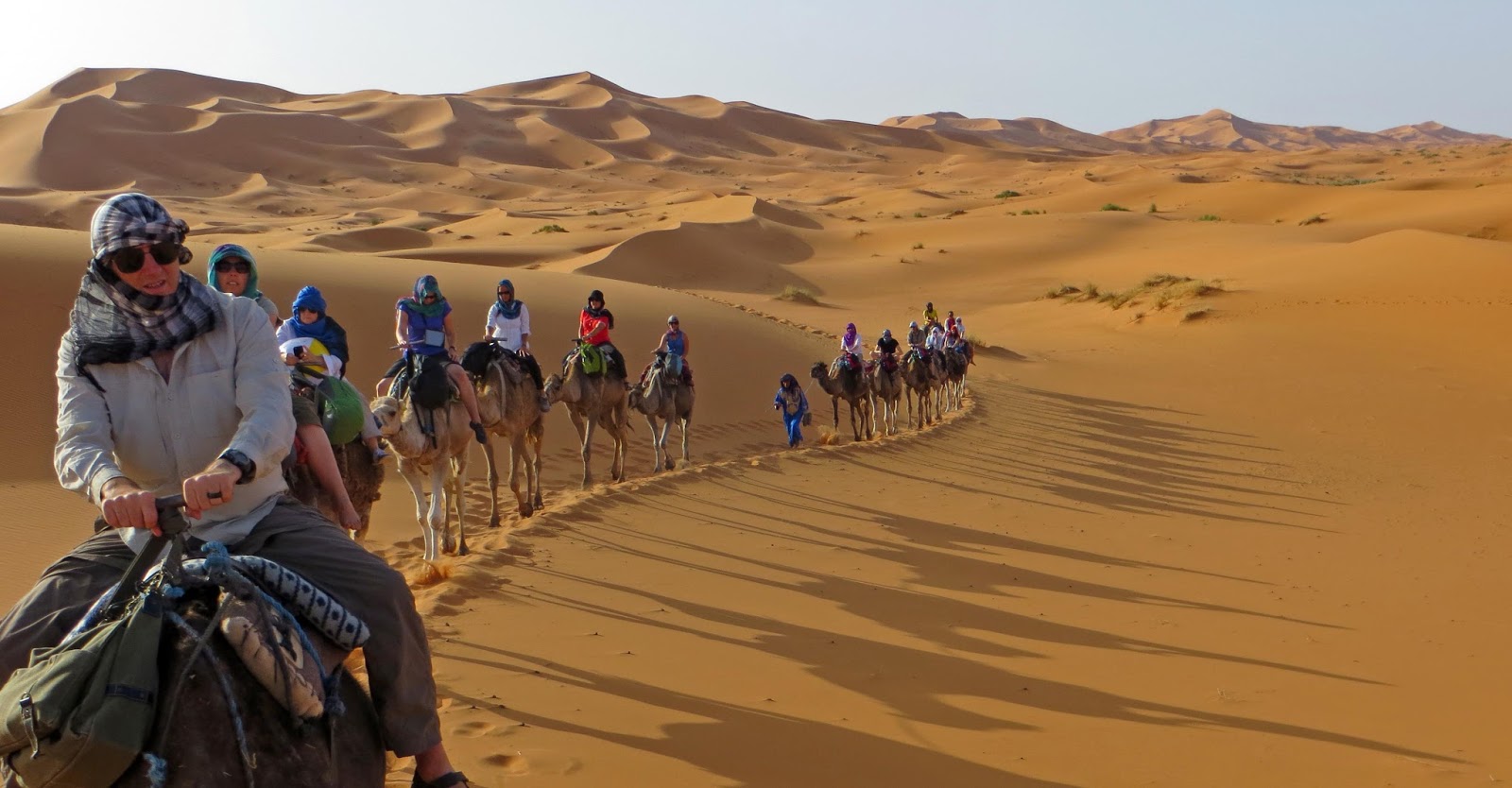 We were heading for Todra (also spelt Todgha) Gorge about 4 hours’ drive away but we stopped a few times along the way. First up was Adarissa ATL, a fossil factory, museum, exhibition and shop. A quarry about 15 kms away produces fossils and fossilised marble dating from between 300 and 600 million years ago, which is sliced and chiselled and polished to produce everything from table- and desk-tops to hand basins showing sea anemones, trilobites and the ancestors of the modern squid in fossilised form. Shopping, though I couldn’t exactly fit a slab in my bag!

We also stopped briefly to check out the local water supply system, an ancient series of underground aquifers uncannily similar to the system I had seen in . It always amazes me how our ancestors came up with similar inventions in such diverse and widely separated places around the world.

Just before lunch, we stopped at a small Ksar, the name for a fortified mud brick town, for a fascinating glimpse of traditional Berber life in the small local museum, where the exhibits included everything from domestic and agricultural utensils, clothing and religious items to doors and window frames. The traditional Berber omelette I had for lunch was very good, as well.

At last, we reached the beginning of the gorge where we would spend the following two nights – and it was spectacular, bordered by cliffs with a strip of buildings perched along the tops and bottoms, and a central green belt nurtured by the river running through the centre. As we drove the 14 kms in to our hotel, the cliffs grew ever steeper and more precipitous until the gap between them allowed just one row of buildings either side of the river. And our hotel was situated below one of these towering cliffs across the river – a very picturesque setting. 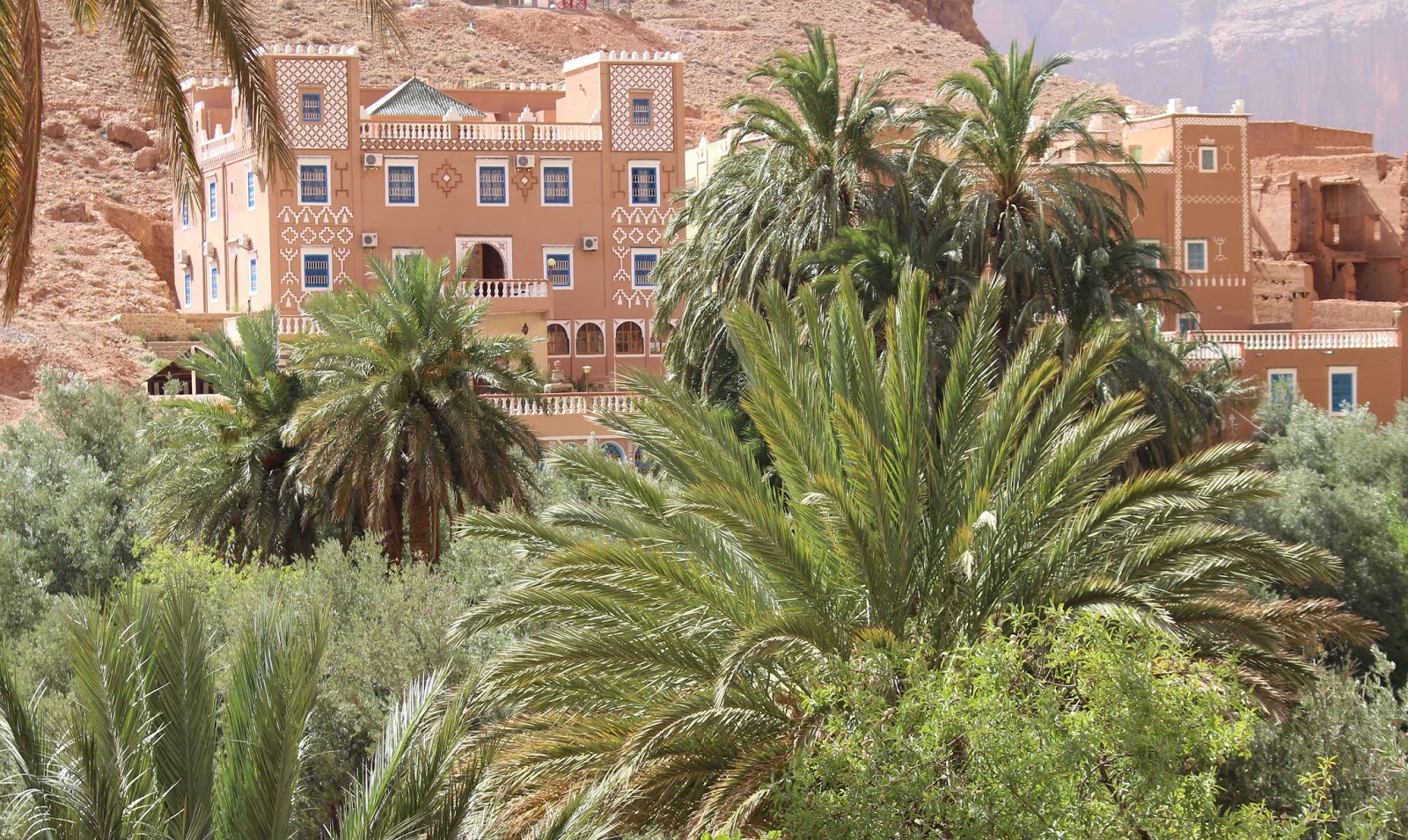 Refreshing showers followed – swims for some, as this hotel had a pool – and a sumptuous dinner – I had a tagine of chicken with prunes, both delicious and cleansing! By 9.30pm, my eyes were closing. After a long hot day’s travel and not much sleep the previous night, my bed beckoned.

For the morning of our second day at Todra there were several options: a strenuous guided hike up the narrow paths and scree slopes of the gorge to visit a Beber settlement, a guided walk along the gardens and trails bordering the river, or relaxing at the hotel. I chose the latter – and it was a good choice. After a week of fairly intensive travelling, a relaxing morning, catching up on chores and journal writing was exactly what I needed.

At 11.30am, most of our group set off in the van for the 10-minute drive towards the end of the gorge, from where we walked a kilometre or so into the steep-sided and narrowest final section, with 200-to-300-metre cliffs towering over us. It was a dramatic landscape but the height of the cliffs provided shade and the river was shallow enough and very cooling to walk in.

From the gorge, it was just 5-minutes’ drive back to the village where we enjoyed a traditional Berber lunch in local household, where they also just happened to sell rugs. Everyone agreed that their lunch was rated the best of the trip so far and, from the flash of credit cards, I think the shopping probably the most enthusiastic to date. The rugs were certainly very beautiful and I was sorely tempted to indulge but the reality is that I don’t need another rug, so I enjoyed being enchanted by all their gorgeous colours and patterns and watching my tour mates bartering for their choices. I think they got some good bargains!

We were back at the hotel by 3pm and, while many chose to watch the latest World Cup football match, I couldn’t think of anything worse to do so took myself off for a walk through the palmeries and fields near the hotel, where I was entertained by the birds and bees and enjoyed some quiet time under the shady trees. The first week of our ‘Best of Morocco’ tour seemed to have passed very quickly and I looked forward to what the next part of our Intrepid adventure would bring.

Posted by sconzani at 13:39 No comments: