More photos from Cusco in the lead up to Christmas ... 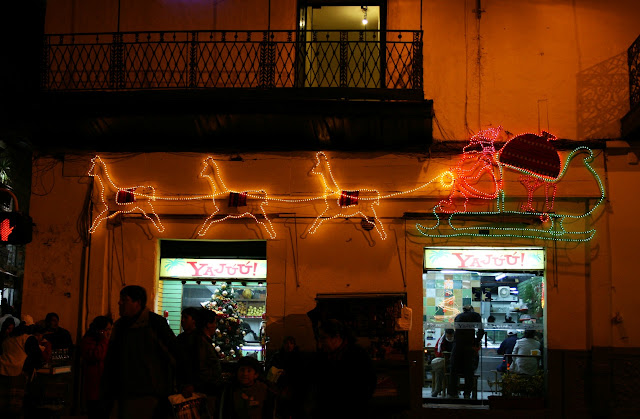 Santa in his sleigh, pulled by his trusty reindeer, all lit up above one of Cusco's excellent juice shops. 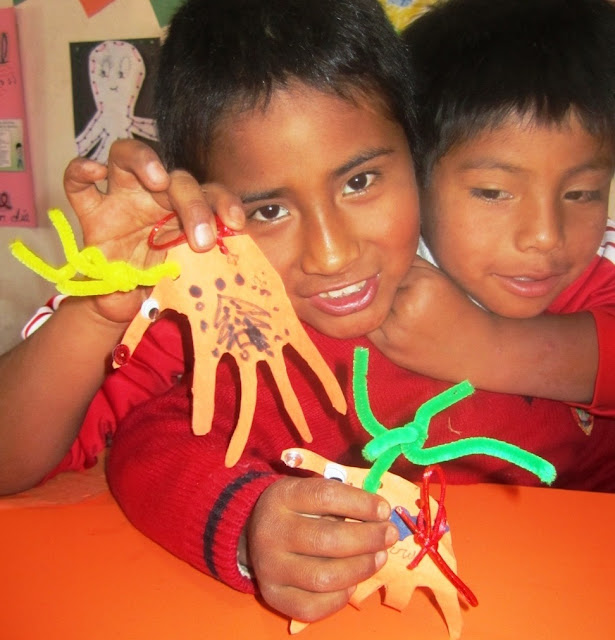 Two of the cute kids at Picaflor House, one of the projects I manage, with the reindeer decorations they made for our Christmas tree. 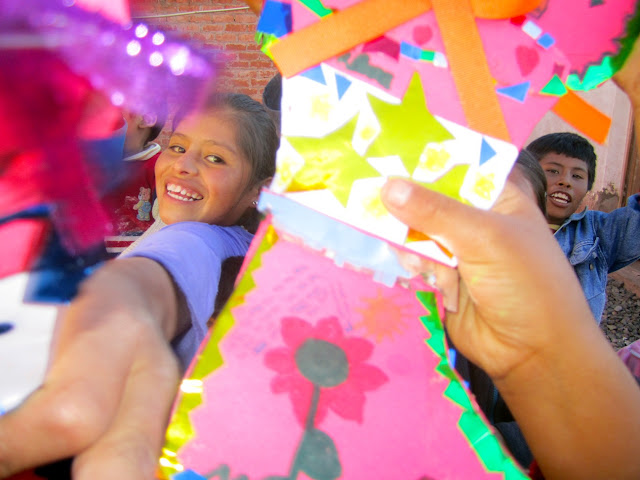 On 20 December, the kids at our Picaflor House project were making Christmas stockings ... and, as you can maybe see, when I asked for a group photo I got mobbed! They love arts and crafts, and are always so keen to show off their work.

This is one of the Christmas food delicacies here in Cusco, Paneton bread - usually accompanied by hot chocolate. It's delicious!

More of Cusco's Christmas lights ... I like the simplicity of the lone star and the streetlamp. 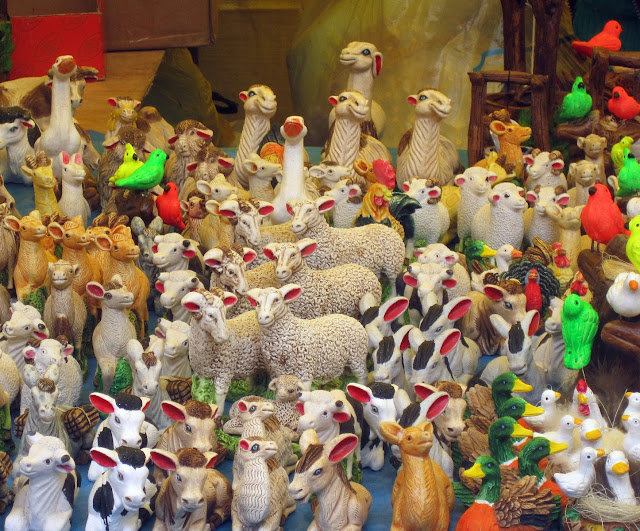 For the past week, one of the plazas here has been filled with small stalls selling every possible thing you might want for Christmas, including the ingredients to make your very own nativity scene. Here's a small selection of the animals available. I love how they all seem to be smiling!

A beautiful Christmas bell on a tree in one of the small plazas here. 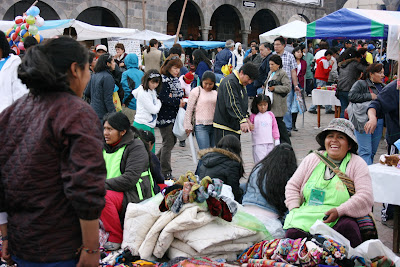 Today was the annual Christmas Eve fair in the Plaza de Armas, here in Cusco so Sarah, our new volunteer coordinator and a fellow photography enthusiast, and I spent several hours checking out all the stalls and taking lots of photos. It was incredibly busy, there were many weird and wonderful things for sale, and we had great fun exploring. 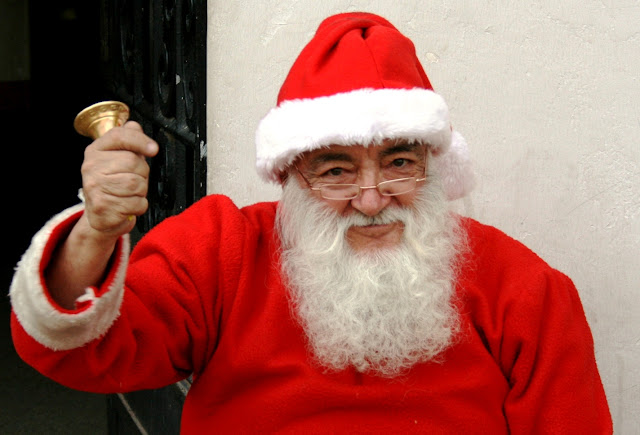 It's Christmas Day here in Cusco and the jolly red-suited fat man visited overnight. Hopefully, he wasn't harmed by the enormous numbers of fireworks that were let off by every household, starting at about 9pm and culminating in a deafening crescendo of blasts at midnight! A strange way to celebrate an essentially religious occasion.

After midnight everyone opens their presents so, now, at 9am, it's very quiet as everyone sleeps off their excitement. Later, families will get together for a big meal, of turkey if they can afford it. And I'll be doing that later too, with the expat waifs and strays here in Cusco.

Merry Christmas from Cusco everyone!

Posted by sconzani at 20:31 No comments:

The run-up to Christmas, in Cusco, in pictures … 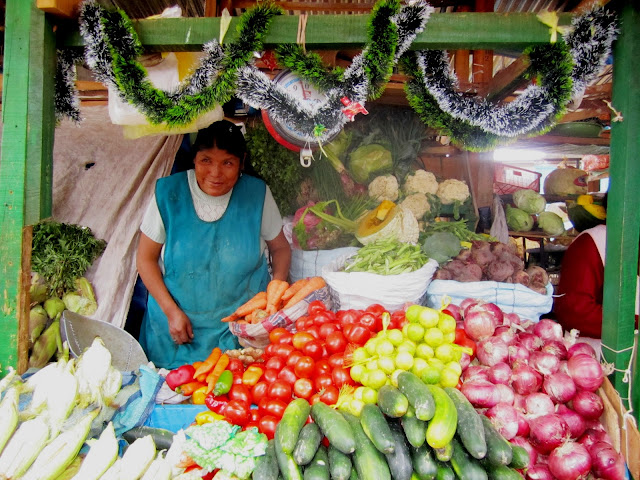 In Cusco, everyone seems to be getting into the Christmas spirit. At Molino, one of the biggest local markets, everyone has decorated their tiny stalls with tinsel, or little Papa Noels, or miniscule Christmas trees. 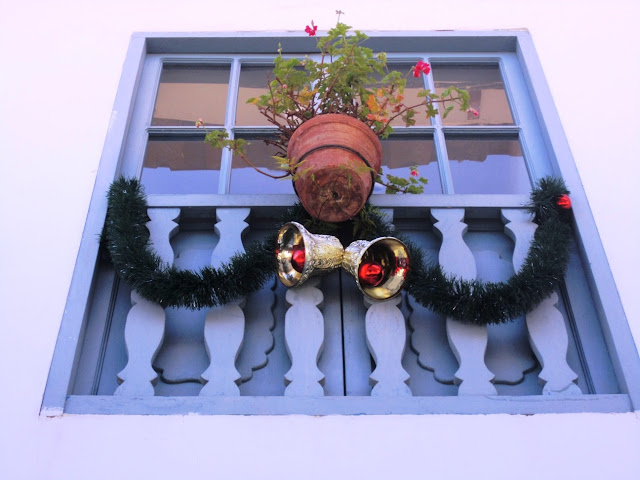 I love this shot! The blue that people use here on their windows and doors reminds me so much of Greece, especially when the geraniums are added. The Christmas decoration here just adds that special touch. 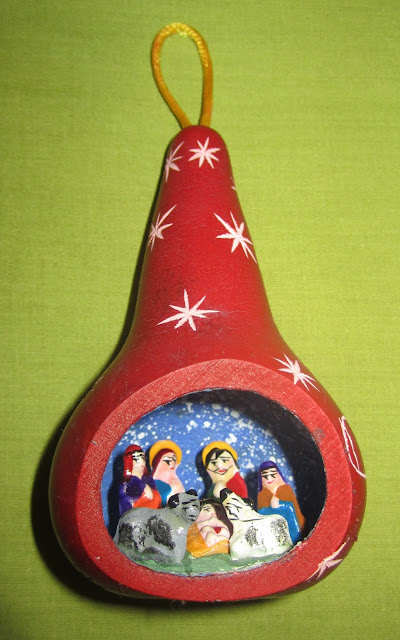 A Christmas decoration Peruvian-style. This is made from a small gourd or calabash, as they call them here. Usually the locals etch images of Inca places or mythology into these calabashes and sell them to tourists as souvenirs. I love the novel use of this calabash, with a tiny nativity scene inside. 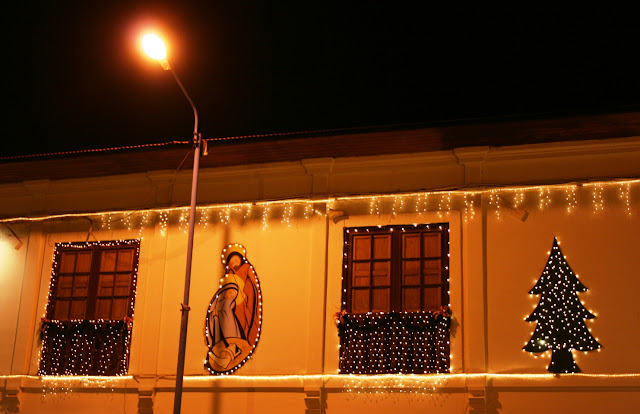 On the 14th day before Christmas, I went for an evening stroll around Cusco taking photos of all the stunning lighting displays. This is just one small building of the many that are beautifully adorned with decorations and lights. 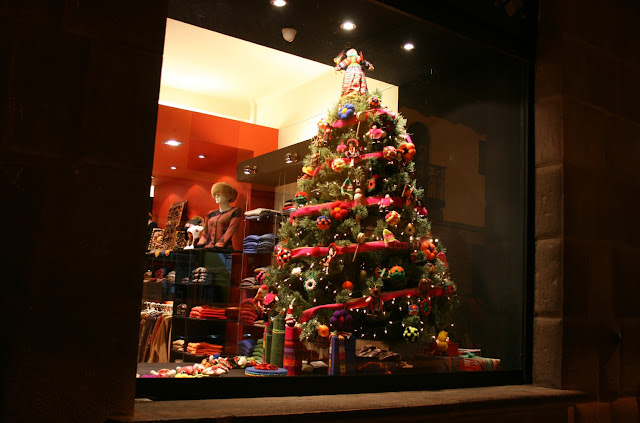 This gorgeous Christmas tree is in the window of one of the more upmarket tourist stores here in Cusco, Peru. The tree has been decorated with local ornaments, like little llamas, tiny Peruvian dolls dressed in traditional costume, little chullpas (the local knitted hat with ear flaps), and much more. 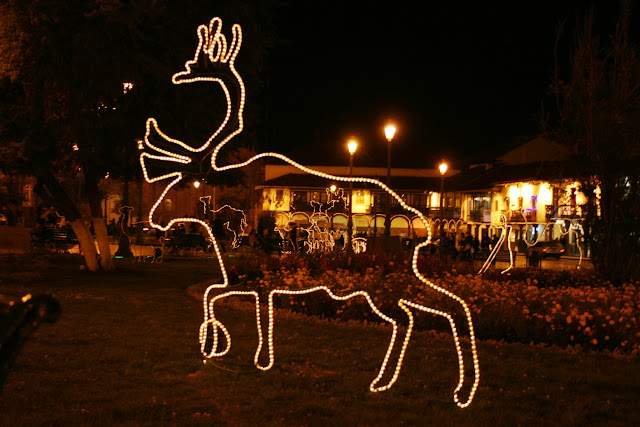 The Plaza de Armas, Cusco's main square, is ablaze with Christmas lights, many of them in the shape of animals. I would like to say that I planned to align one of the streetlights to look like this reindeer's eye but it was, in fact, sheer good luck! 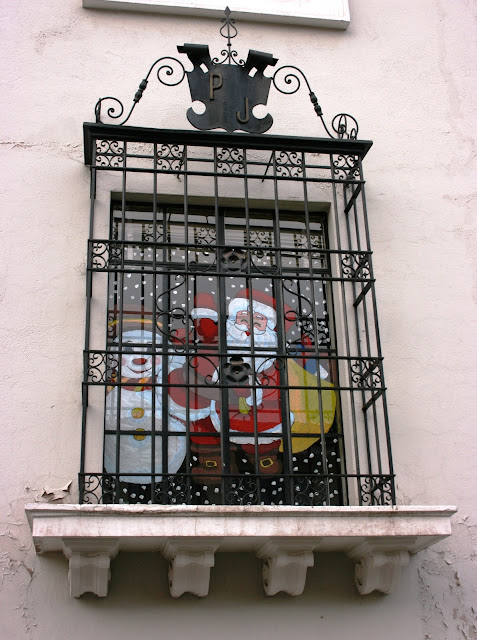 This window is in the Palace of Justice, the imposing and very beautiful Spanish colonial building that houses the law courts and justice department here in Cusco. Even in such a serious setting, Christmas is obviously still a big focus for the staff, as many of the windows are decorated with festive scenes. I love the irony of this photo, with Santa looking like he's in jail behind the security bars on the window. 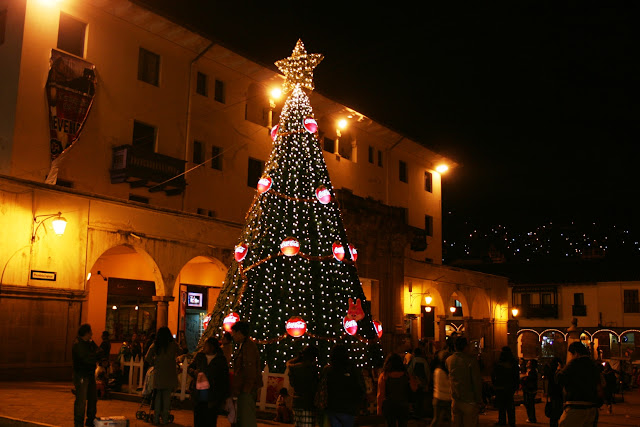 This is Cusco's main Christmas tree, in one of the plazas in the central city. The name Coca Cola seems almost to be synonymous with Christmas here - you can see the logo on this tree but also in many shop window displays. Unfortunately, the Peruvian people drink way too many fizzy drinks, so obesity is becoming a problem in the children here, and such sugar-intensive drinks play havoc with the teeth of children who have no access to dental care. Coca Cola’s best present to Peru would be to stop advertising their products so heavily! 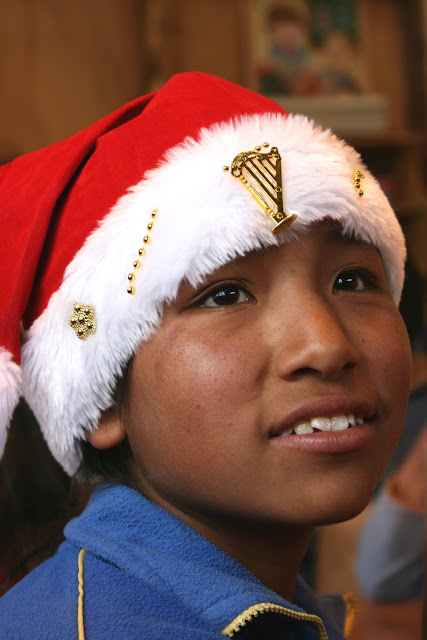 The 16th of December was La Chocolatada in the small village of Oropesa where I work. My organisation, Globalteer, and the kind folks at Southern Crossings travel agency gave all 800 of Oropesa's primary and high school kids a large hunk of Paneton bread and a mug of freshly made hot chocolate. The smiles were heart warming.
Posted by sconzani at 13:51 No comments: 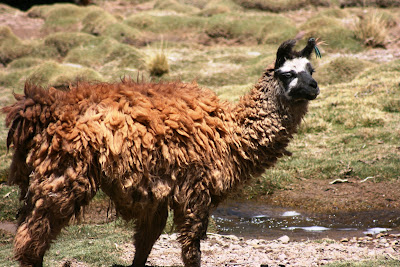 Not only are llamas extremely cute animals, they are also useful and unusual.

Llamas have a fine undercoat, the wool from which can be used to make clothing and handicrafts, and their coarser outer hair is used for wall-hangings and rugs (I have one!). Just as llamas come in a variety of colours, so does their wool range in colour from white or grey to reddish-brown, light and dark brown, and black.

Llamas have been used as beasts of burden for centuries. They are sturdy and sure-footed, making them ideal beasts for bearing heavy burdens along the narrow mountain trails of the South American mountains. 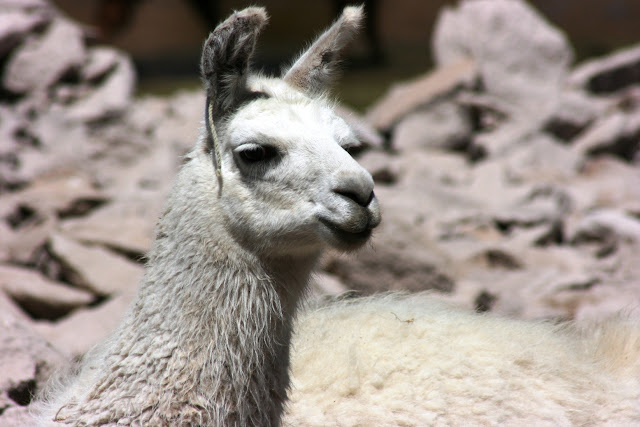 And now for the unusual bits ... According to Wikipedia, llamas mate lying down – it’s called a kush position (sounds cushy to me!) – which is rather unusual for such a big animal and, also unusual for their size, their mating is no quick fling. Instead, they’re at it for between 20 and 45 minutes! Plus, the sexually aroused male makes a gargling sound – called an orgle – before and during the mating process.

But wait, there’s more ... As the tongues of female llamas (called dams – the llama, not their tongues!) cannot reach more than half an inch outside their mouths, they are not able to lick off their babies. I presume the foetal sac comes off when the baby llama (called a cria) rolls around on the ground. Instead of bonding with their offspring through the licking process, the mummy llamas nuzzle their babies and hum to them. I haven’t witnessed the humming but doesn’t it sound delightful? I wonder if they have favourite tunes.

Llamas also have a reputation for spitting. A local once told me that llamas never spit at beautiful women, only at the less beautiful. I can verify there is some truth to that statement as I have had a llama spit at me. However, when I asked various other locals about this statement recently, they said they’d never heard of it, so maybe it’s just a good story to tell gullible tourists!

Wiki says that llamas which have been reared correctly rarely spit at humans, though they do spit at, kick, neck wrestle and ram into each other. These actions, by the males not the females, form part of the disputes they have to establish dominance in the herd – their way of moving up and down the social ladder of llama society. Apparently, the females do also spit, as a way of controlling other herd members – an interesting concept.

Though this spitting, kicking and neck wrestling all sounds rather aggressive, llamas are family animals and do look after each other. When threatened, a llama will emit a warning bray to alert the rest of the herd, and llamas often hum to each other as a way of communicating. As well as these sounds, they also make groaning noises or produce a 'mwa' noise when they’re afraid or angry. Strange then that humans use ‘mwa’ as an expression for sending someone a kiss. 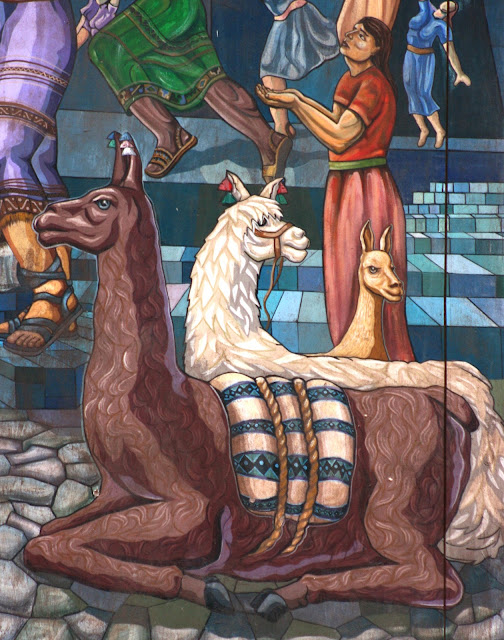 The llama is a symbol used in most of the Andean nations in South America. Here in Peru, you can buy soft toy llamas made of llama wool, they appear in paintings and on murals, and their image is frequently found on t-shirts.

As the word llama is pronounced yama in Spanish, puns are made on the name – for example, I have seen a t-shirt with a cartoon of a llama riding a motorbike, with the word Llamaha written beneath.
Peruvian women and children, dressed in traditional costume and leading llamas, are a common sight in central Cusco. Tourists can pay to have their photos taken with the women and/or children and/or llama.

Llamas are not to be confused with their close cousins the alpaca and the vicuña ... more on those creatures in a future blog.

Posted by sconzani at 20:37 No comments:

My, what big knockers!


Cusco has a lot of big knockers. So do many of the other towns I’ve visited in Peru.

Typically, they are found on the doors of large old constructions, like municipal buildings and churches.

Door knockers are, of course, attached to doors so that people outside can let those inside know they’re there. But most of the large knockers here are purely ornamental – some are placed so high on the door that only a giant could possibly reach them. And most are very ornate, with grotesque faces, naked cupids, and fantastical creatures.

Posted by sconzani at 01:33 No comments: