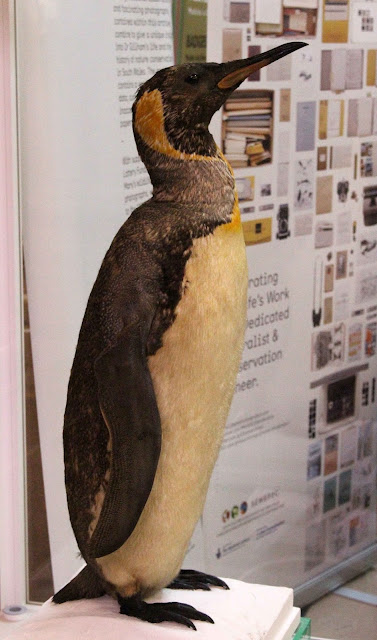 Though the Explore Your Archive event at National Museum Cardiff last Saturday was about the Wonder Women of Wales (like our dedicated naturalist Dr Mary Gillham), the thing that initially attracted the attention of passers-by to our stand was this penguin. And it was every inch the star attraction.

It’s a King penguin (Aptenodytes patagonicus) that was presented to the museum by renowned Antarctic explorer Sir Ernest Shackleton.

Standing around 90cms tall, the King penguin is a most impressive bird and proved taller than many of the small children who admired it standing proudly in its glass case.

As the chart below, from Mary Gillham’s book Instructions to Young Ornithologists: IV Sea Birds (Museum Press, 1963) shows, the King is second only in size to the Emperor.

Strictly speaking, it’s not actually an Antarctic penguin as it prefers slightly warmer climes and it breeds on the sub-Antarctic islands that are dotted around the globe below and , and South America. 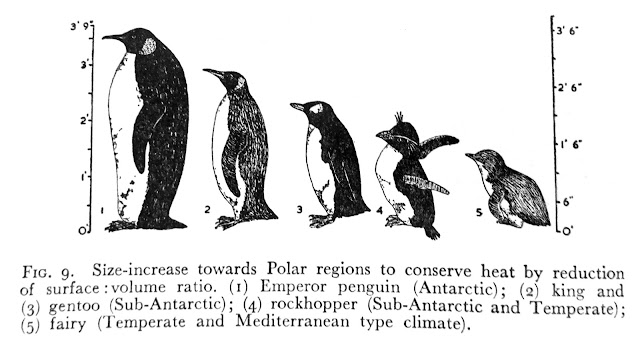 The penguin was collected on Sir Ernest Shackleton’s 1908-09 Nimrod expedition. In its archives the museum still has a letter about Shackleton’s gift of this penguin, sent to The Director of the National Museum of Wales on 17 March 1910 from the British Antarctic Expedition 1907 HQ in and signed by Shackleton:

Dear Sir,
In reply to your letter of yesterday’s date, I beg to say that I have much pleasure in presenting a King Penguin to the for the Principality of Wales. I have instructed Messrs Rowland Ward, Piccadilly, , to send one on to you.

Rowland Ward Limited was a well-regarded firm of taxidermists that processed many of the dead creatures that made their way back to from world explorations of the Victorian era and later, and the company also specialised in game-hunting trophies and in manufacturing bizarre items made from animal off-cuts, like zebra-hoof inkwells. Perhaps surprisingly, the firm is still trading, though is now based in .


Have you worked out yet why we had Shackleton’s penguin alongside our stand at the Wonder Women event? Well, Shackleton and his crew aboard the Nimrod returned to Britain via the sub-Antarctic Macquarie Island, one of the places where King penguins live and breed, so it’s highly likely this penguin was collected during that stopover. And Mary Gillham was one of the first four women ever to enter the Antarctic region, spending a month on Macquarie Island over Christmas 1959 – New Year 1960. As well as studying ’s flora, Mary conducted scientific research into the island’s bird life including, of course, King penguins.

The Mary Gillham Archive Project will be blogging about Mary’s Antarctic adventures in December so keep an eye on the project website for those posts. And you can read more about this and the other penguins in the National Museum Cardiff’s collection here.
Posted by sconzani at 12:39 No comments:

‘Dedicated Naturalist’: The story behind the story

Today marks the beginning of Explore Your Archive, a campaign co-ordinated jointly by The National Archives and the Archives and Records Association that ‘aims to showcase the unique potential of archives to excite people, bring communities together, and tell amazing stories’.

From my volunteer work on the ‘Dedicated Naturalist’ Project, helping to decipher and digitise, record and publicise the life’s work of naturalist extraordinaire, Dr Mary Gillham, I know from personal experience how exciting it is to read diaries about everyday life in my native New Zealand in the 1950s and how our work with Mary’s archives is revealing the amazing stories of her adventurous life.

So, to celebrate the start of Explore Your Archive, here’s my story of Mary’s story behind the newspaper story. 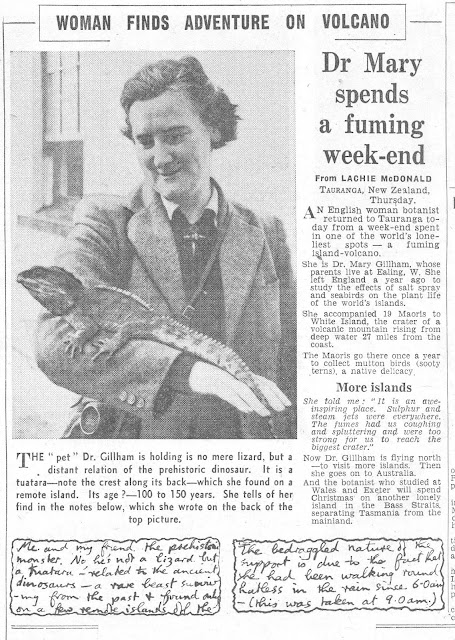 This newspaper article about Mary appeared in ’s Daily Mail on Friday 22 November 1957.

Dr Mary spends a fuming week-end
An English woman botanist returned to Tauranga today from a week-end spent in one of the world’s loneliest spots – a fuming island-volcano.
She is Dr. Mary Gillham, whose parents live at Ealing, W. She left a year ago to study the effects of salt spray and seabirds on the plant life of the world’s islands.
She accompanied 19 Maoris to , the crater of a volcanic mountain rising from deep water 27 miles from the coast.
The Maoris go there once a year to collect mutton birds (sooty terns), a native delicacy.
...

In her diary, Mary records her meeting with the reporter:

Wednesday 20 November 1957
The boat nosed in, without tying up, heaving clumsily, and I leapt the gap while the pilot handed the luggage aboard. And so once more to Tauranga where the sub editor of the ‘Bay of Plenty Times’ awaited me on the wharf but missed me, coming instead to the Masonic Hotel at breakfast time next a.m. He had, however, been forestalled by his editor, Lachi McDonald, 20 years on the staff of the Daily Mail and their Far East war correspondent. The chappy came in and interviewed me at length just as I was finishing a session with Ken Fraser in the Masonic Lounge. It seemed that my adventures were front page news as (a) landings were only effected on White Island 4-6 times a year and (b) the Motiti Maoris were very conservative and seldom received a pakeha in their midst. 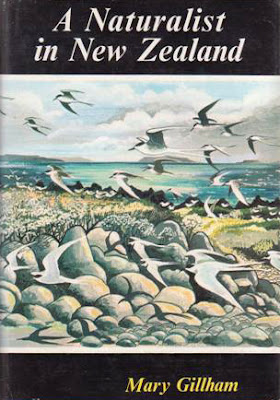 This additional note has been written in the diary at a later date:

McDonald cabled Daily Mail, with my story and on 21 November my parents were visited for a photo. They gave me and the tuataras, and on 22nd I hit the British headlines and it seemed my acquaintances throughout G.B. buzzed with interest. Particularly topical as there were 2 BBC broadcasts on that same week. Upshot: Letter from F. Muller, publishers, saying they would publish a book of my travels if I cared to write on my return!!

As it turned out, the book, A Naturalist in New Zealand, was not published until 1966 and then by Museum Press in , with a co-edition by Reed Books in . Mary was on her way to becoming famous!

Way back in March, I showed you the Beastie Benches, a series of nine terracotta benches, sculpted by artist Gwen Heeney who got her inspiration from by the mythical creatures in Dylan Thomas’s poem ‘The Ballad of the Long Legged Bait’.

Here is another set of Henney’s wondrous carved brick benches. The simplest of the three (below left) is the Mussel Bench, which pulls together a series of mussel shells to form a bench, but one much more comfortable than the real mussel shells could ever be. I have to say I don’t quite see the shells here but perhaps I should’ve looked more closely at the other side of the bench instead of just sitting on it. 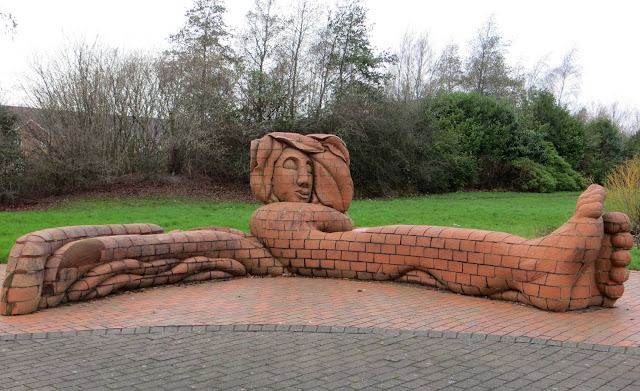 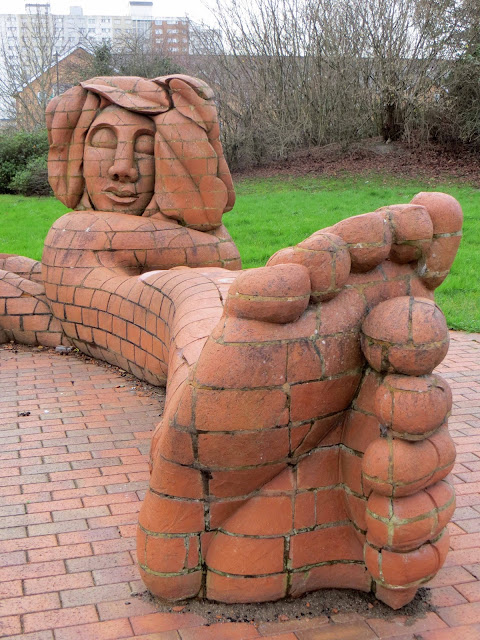 Sitting cheek by jowl with the Mussel Bench is Rhiannon Seating, which is also the collective name for this group of benches located in , near . Rhiannon, which translates as ‘Great Queen’, is a central figure in Welsh mythology, in the stories related in the Mabinogian. She personifies the ancient concept of the Earth Goddess or Earth Mother.

What amazes me with this artwork is the fluidity Heeney has achieved with a material that is, basically, a pile of rectangular, sharp-edged building blocks. Rhiannon looks completely relaxed, enjoying a comfortable snooze in the sun. And those feet! If you tickle them, will the sleeping giantess awaken?

The third bench that completes this 1999 trilogy is Sleeping Partner, a mystical male figure who is also sleeping away his days. It almost seems a shame to sit on him in case he too awakens from his peaceful slumber. 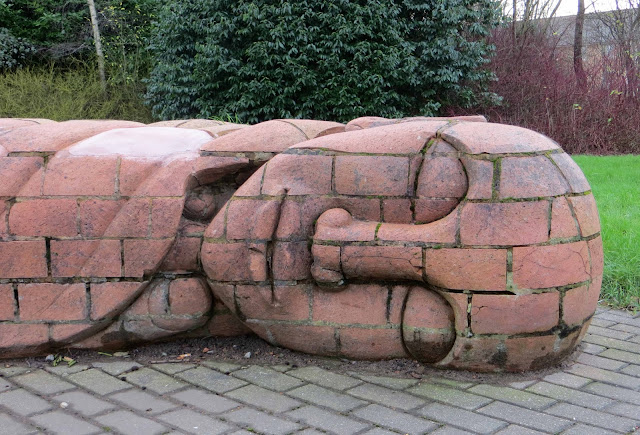 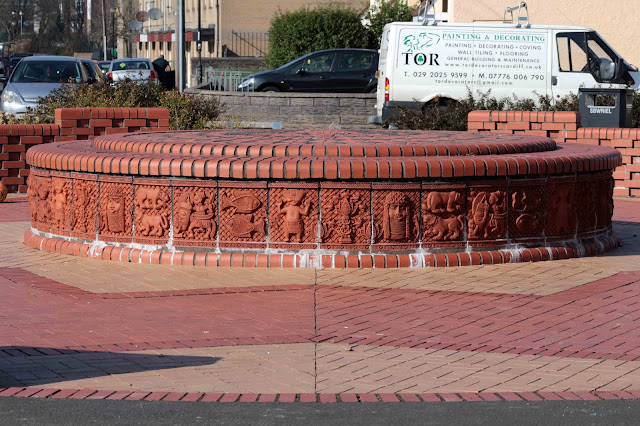 This second terracotta artwork is also for sitting on but it has an entirely different feel to Gwen Heeney’s work. Dating from 1993, designed by Nina Edge and created by ceramicist David Mackie, West Close Square can be found in ’s inner city suburb of Butetown. It is a multi-cultural community, whose many and varied ethnic roots are reflected in the decoration of the ceramic panels that surround the central circular piece. 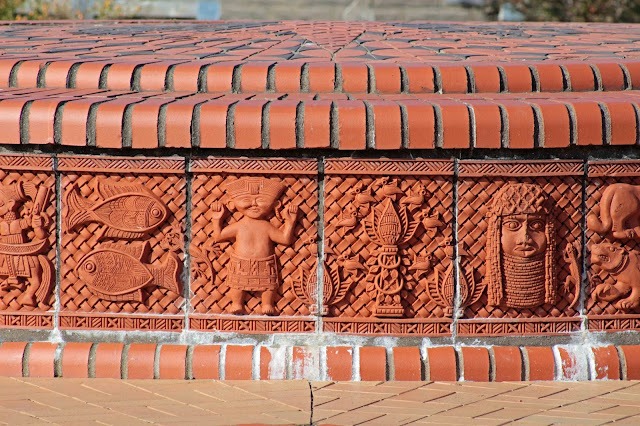 In an article entitled ‘Pass the Parcel: Art, Agency, Culture and Community’, Nina Edge tells the wonderful story of how this piece came into being through the enthusiasm of a group of creative women from the Butetown community where she was then living:

As far as they were concerned, they had a neighbourhood artist -- like they had a hairdresser, a cook and a singer. They had no interest in approaching other artists. So the administration bent to the gentle insistence of the young women, who in turn knew and pursued the aims of their wider community.
The result is , an artwork that has transformed a vacant lot on a council estate into a space where the local people can come together ‘to show off, sit, play, chew ghat, smoke weed and meet’. 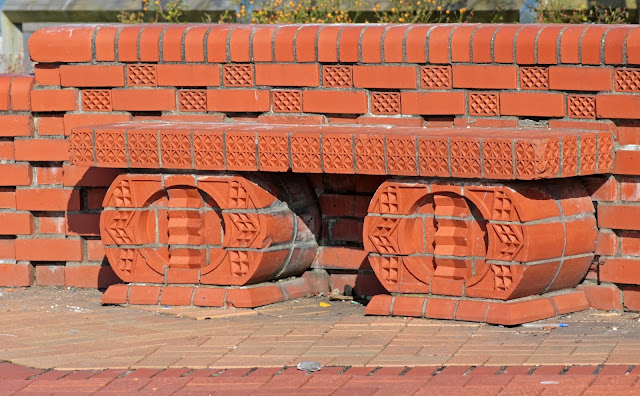 Posted by sconzani at 21:39 No comments: