·         As they use their tongues to clean themselves, dogs’ tongues have an extremely rough texture, helping
them to remove dirt, parasites and oil from their coats.

·         A dog’s tongue also acts as an air-conditioner. When a dog becomes hot through exercise, its tongue swells because of the increased blood flow. The dog then lets its tongue hang out of its mouth and pants, allowing air to cool any moisture on its tongue, thus also cooling its blood.

Okay, it’s not a real dinosaur but a concrete one, from , the local fun park in Oropesa. And I know nothing at all about dinosaur’s tongues and couldn’t find much by googling, but the picture has a tongue in it, so here it is! 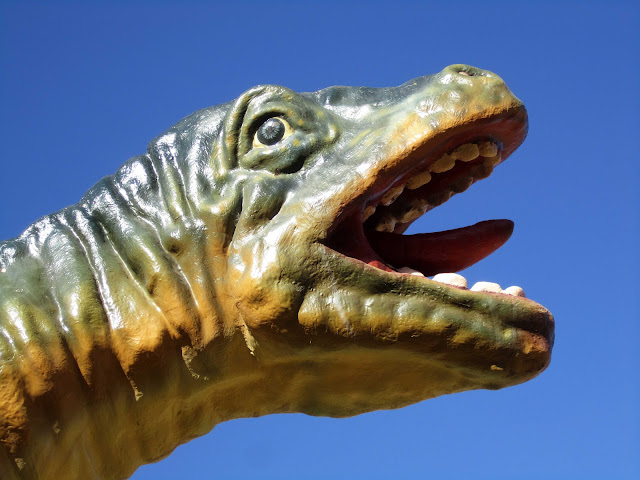 After deciding I needed a human tongue or two for this blog, I asked the kids at Picaflor House to pose for me. Of course, they were happy to poke their tongues out at me and I just love these photos. You can almost see what they had for lunch! 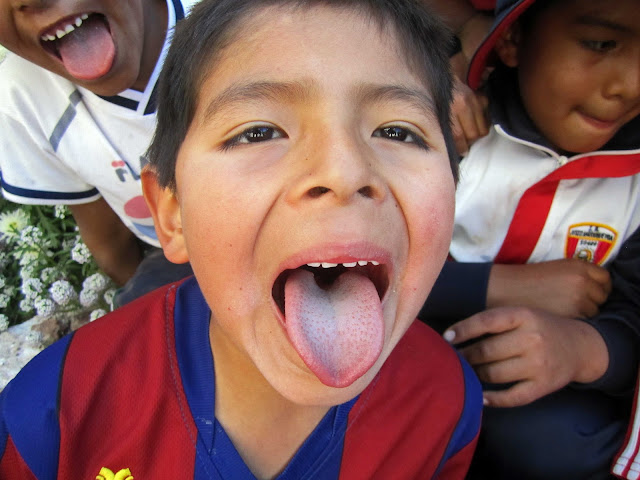 ·         The human tongue is the strongest muscle in proportion to its size in the human body. It is also the most flexible.

·         If you are healthy, your tongue will be pink. If your tongue is white, that means there is a film of bacteria on it. And, interestingly, a human’s mouth contains much more bacteria than a dog’s mouth – amazing when you consider what a dog uses its tongue for!

·         Much like fingerprints, the tongue print of every human is unique. I’m surprised law enforcement hasn’t made use of that fact, though tongue-printing could be a very messy business. 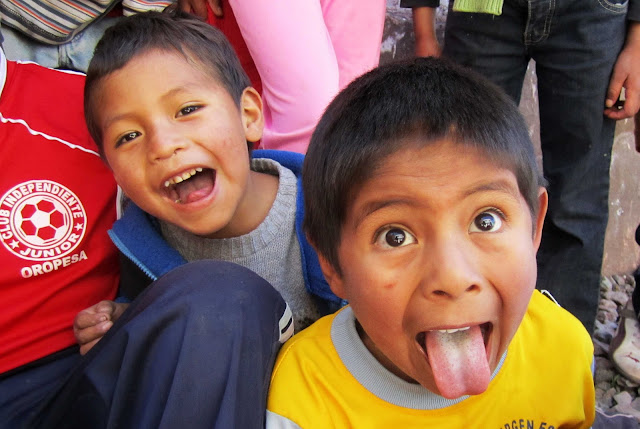 This is one of the Spectacled, or Andean, Bears I met during my recent tour of northern . I will write more about these magnificent creatures in a future blog. 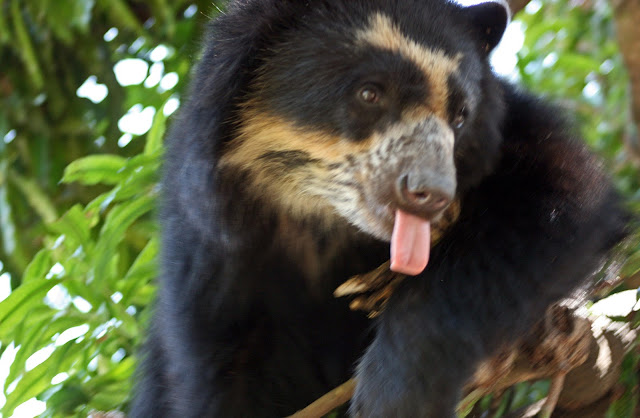 ·         Bears have very long tongues, the better to extract honey and insects from trees and logs.

·         Polar bears have blue/black tongues. Their skin is actually that colour too, underneath all that white fur.

·         As well as grunts, Black Bears use tongue clicks when engaged in friendly conversation with their mates and cubs. Aw, so cute!

Okay, that’s it. Everything you never wanted to know about the tongues of these various creatures. I promise a more serious blog next.
Posted by sconzani at 01:44 No comments:

Peruvians collectively have a huge sweet tooth. Kids are constantly seen sucking on lollipops or fizzy drinks, cake shops proliferate and display the most garishly coloured examples of cake decoration ever seen anywhere, and street vendors sell sweet treats like churros, a deep-fried honey-filled pastry, revolución caliente, crunchy, spicy cookies and the rice and milk combination, arroz con leche. Dulce de leche, a sweet made by heating sweetened milk, is a big favourite here, both eaten on its own and as a filling in pastries or an icing on cakes. It is just a little addictive! And, of course, grows its own cacao beans, so people have been making chocolate here for over a thousand years.

All that being said, is it any wonder that Sarah and I decided we needed to eat our way around northern ? Or, to put it a little more delicately, we embarked on a gastronomic torta tour, sampling the cakes of the towns and cities we visited. 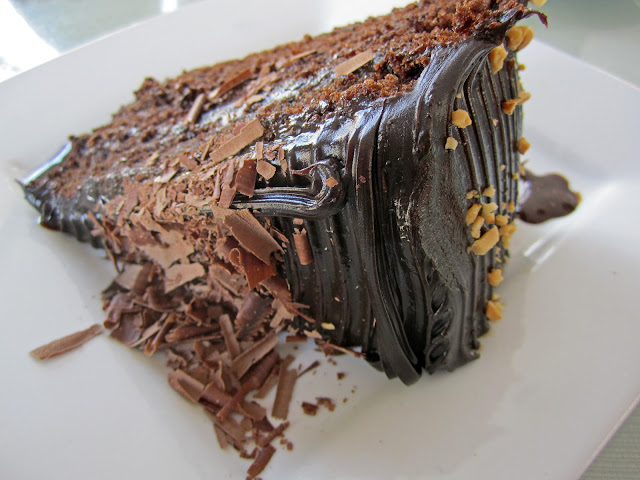 Cake number one:
This was the first cake of the tour, a dessert of chocolate cake that Sarah enjoyed at the in . For some unknown reason, I didn’t have any dessert that night – I think I had simply eaten too much Chicharron de pollo, deep-fried chicken and chips, to fit in anything else.

Cakes two and three:
These are typical examples of the vivid and gaudily decorated cakes I described above. We had gone for a wander through the huge local market in central and saw these cakes in a shop specialising in kids’ birthday cakes. This is the sort of cake we buy for our birthday parties at Picaflor House. They are super sweet and the kids love them. 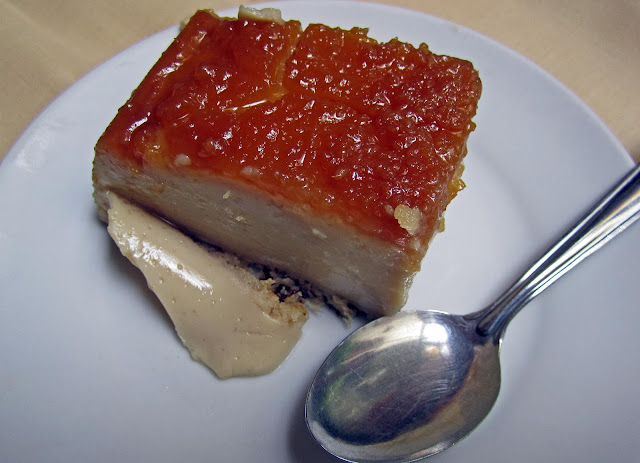 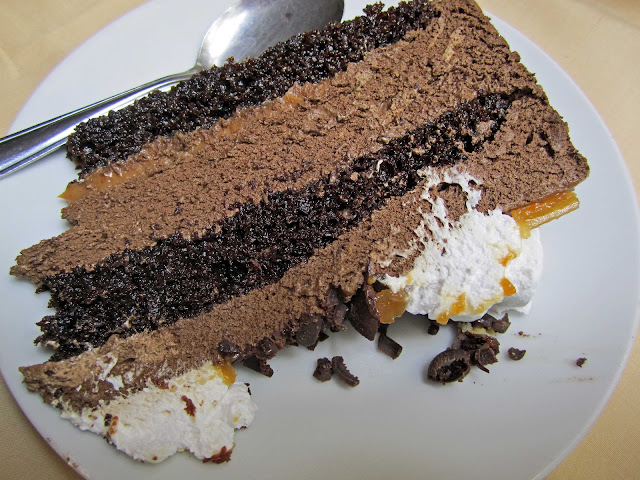 Cakes four and five:
After a 3-hour early morning bus ride from Chiclayo to Trujillo, Sarah and I had a wonderful time walking round inner-city Trujillo with our lovely guide, Henry. But, little breakfast and all that walking made us hungry so, after our city tour and before our afternoon tour to one of the local archaeological sites, we enjoyed a sumptuous three-course lunch for the tiny sum of S/16.50 – that’s about US$6 – at Romana Restaurant. After a delicious salad entrée and a main course of chicken, I had a slice of crema volteada, a little like crème caramel, and Sarah had delicia de chocolate, a rather decadent concoction that would please even the fussiest of chocoholics! 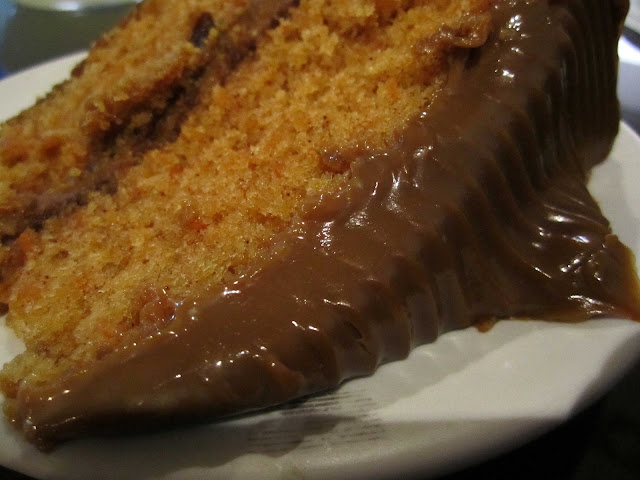 Cake six:
I wasn’t exactly sure what this cake was made of when I ordered it – the usual procedure was to go to the cake counter and point – but it turned out to be carrot cake. And it was a very moist and quite delicious cake but I’m used to carrot cake with a cream cheese frosting and I found the dulce de leche filling and icing far too sweet – so sweet, in fact, that I left most of it. I kid you not! 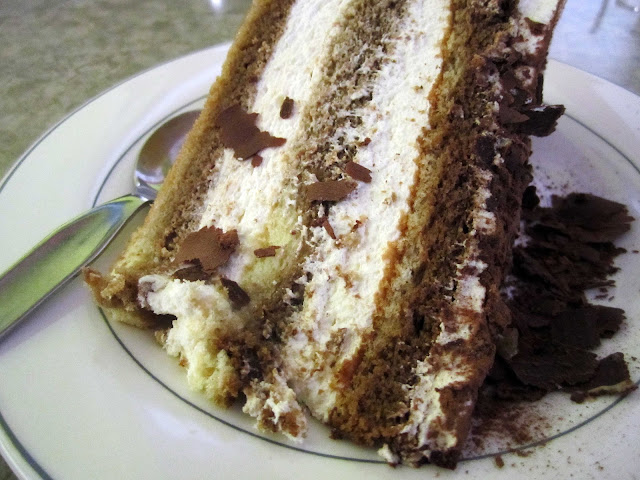 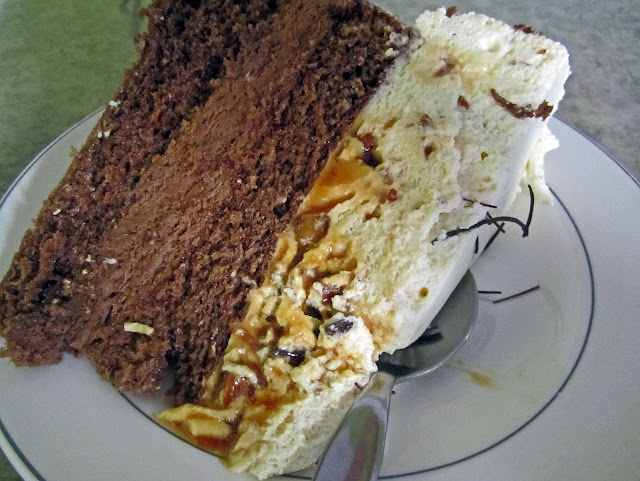 Cakes seven and eight:
This was a relatively lazy day for us – every other day we had tours booked, starting early, but this day we slept in and, only later, booked ourselves tickets to a performance of the local horses and dancers (more on that in a future blog). Back in town later, we checked out the exhibits in the local toy museum, then decided it must be time for cake! This time I chose a divine tiramisu, an international classic, and Sarah had delicia de almendra, or almond delight. I’m reliably told it was indeed delightful! 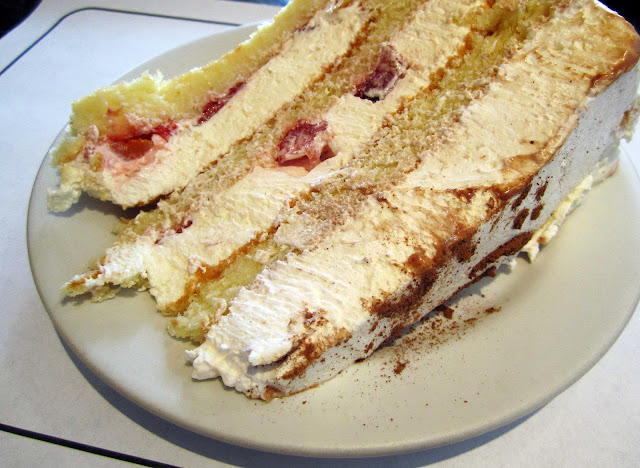 Cake nine:
I don’t know why I don’t have a photo of cake ten – Sarah must’ve gulped it down before I had time to shoot it! We were at Arturio’s, another of Trujillo’s rather excellent culinary establishments, where I indulged in what was called a fruit soufflé, though it was actually layers of sponge cake and cream with bits of succulent fruit thrown in to the mix. It was light and finger-licking good.

And so ends this little tour of the tortas of northern . Astoundingly, I didn’t put on any weight on our tour, probably because we did a ton of walking, but I wouldn’t recommend trying a tour like this without plenty of exercise. I do, however, recommend sampling the sweet delights of .
Posted by sconzani at 03:46 No comments:

A toilet tour of northern Peru ... 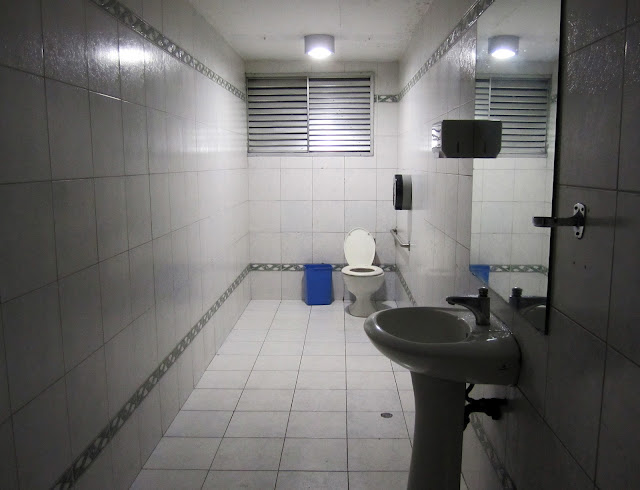 Bog number one:
At El Museo de la Nacion in , the biggest chamber I’ve ever seen anywhere in the world – big enough to hold a small party and appropriate enough for the cavernous building in which it was located. I had tried several other toilets but all were locked or out of service, so I asked the security woman where I could find a toilet and she directed me to this ballroom of bathrooms. 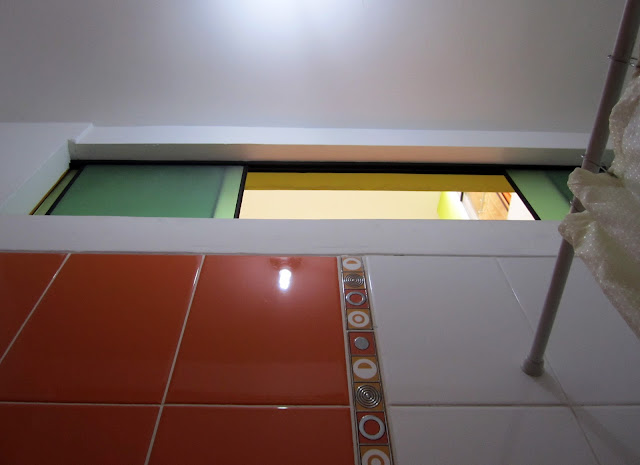 Bog number two:
At the Embajador Hotel in . The toilet with a view – or, more accurately, the toilet where you can be viewed! It’s a high-ceilinged room, with perhaps a 20-foot stud – with windows at the top along one wall, which fronts on to a corridor and a small inner courtyard. The windows are permanently open and so high up that they’re impossible for anyone without a tall ladder to close – not something your average tourist carries in their luggage. Presumably they’re open to allow steam and assorted bathroom-specific smells to escape but this also means that anyone feeling even vaguely perverted in the two rooms overlooking the courtyard can also overlook you at your ablutions – not the most comfortable way to complete the daily necessities of life. 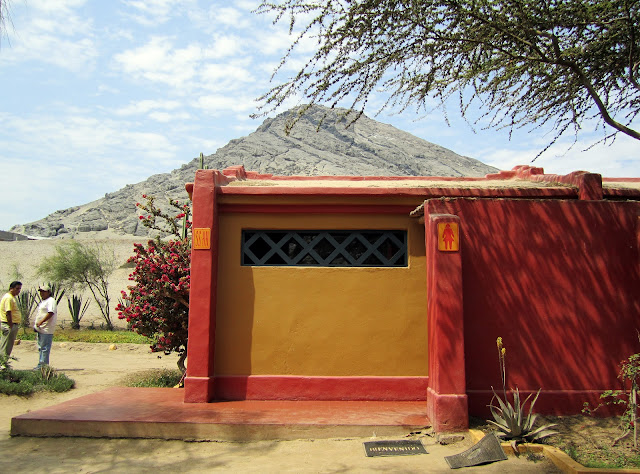 Bog number three:
At Huaca de la Luna, near . Is this setting beautiful or what?
Huaca de la Luna, and the nearby Huaca del Sol, are archaeological sites of the Moche, or Mochica, civilisation, dating from about 100 to 800 AD, and they are impressive. Huaca de la Luna is an adobe-brick pyramid-shaped structure that appears to have served a religious and ceremonial religious function. It has beautifully coloured sculptural friezes, including one huge wall panel that is seven registers and perhaps 60 feet tall.

I didn’t actually get to use this toilet, as Sarah and I had enjoyed a very thorough tour of the site with our lovely English-speaking guide Henry, so were holding up the Spanish-speaking group and had to rush back to our tour van. The mountain in the background of this image is called Cerro Blanco, or . 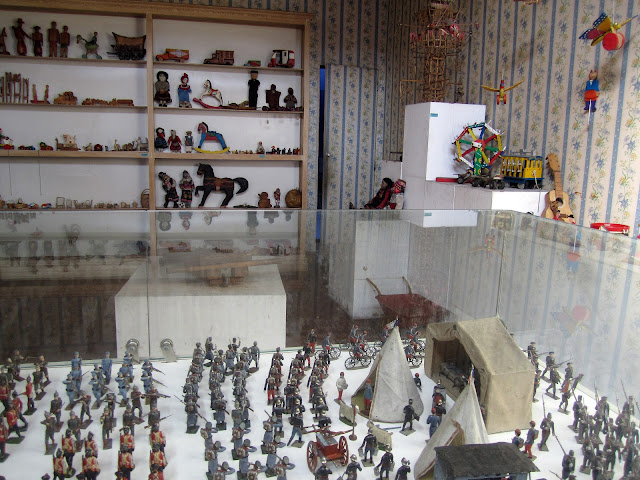 Bog number four:
At the toy museum, in . The toilet was carefully camouflaged with a wallpapered door to match the surrounding wall, the entrance thereby not distracting from the exhibits which surrounded it: to the left, shelves housing dolls, a wooden mototaxi, and an old half-deflated ball; to the right, a pair of colourful, traditionally dressed Peruvian dolls; and, in the foreground, a cabinet displaying a large collection of toy soldiers from France and England dating from 1920 to 1925. 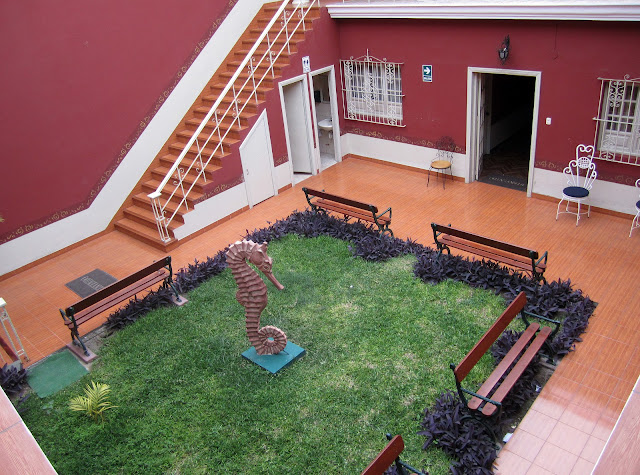 Bog number five:
At the Colonial Hotel in , from the first floor balcony where our room was located. There was nothing particularly remarkable about the toilet itself, but it was a nice hotel, with plain but comfortable rooms, and plenty of indoor and outdoor seating areas. It’s only a block and a half from the city plaza, with a nice café next door for breakfast and other meals, and a tour company on the other side, which had friendly staff and reasonably priced and well run tours. Oh, and the toilet was clean too! 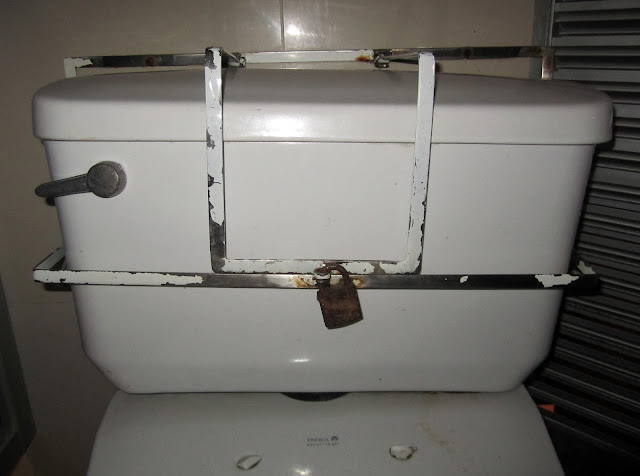 Bog number six:
At the Cruz del Sur bus station in . For some unknown and obviously bizarre reason, the cisterns of the toilets were protected by metal grids, padlocked in place. I couldn’t help but speculate as to why: is plagued by toilet thieves? passengers of Cruz del Sur buses have a penchant for fiddling with the inner workings of the cisterns – a fetish with ballcocks perhaps?

This photo was a little tricky to capture. The gloom of the room meant I needed to use the flash and I couldn’t help but wonder what the service staff thought of a bright flash of light suddenly illuminating the end cubicle: had some alien being beamed down from a galaxy far far away? was the kinky gringa taking a photo of some forbidden fruit to instil longing in a distant lover? I avoided making eye contact with the woman on exiting the cubicle and washed my hands with alacrity in order to avoid any difficult questions.