Under my feet : Principality Stadium

Rugby fans around the world will, I’m sure, be familiar with Cardiff’s Millennium – now Principality Stadium. Built in the late 1990s, after Wales had won the right to stage the 1999 Rugby World Cup, the stadium was constructed in the central city, a rugby ball’s throw from Cardiff Castle, adjacent to the still-extant Cardiff Arms Park, and on the site of the old Empire swimming pool. 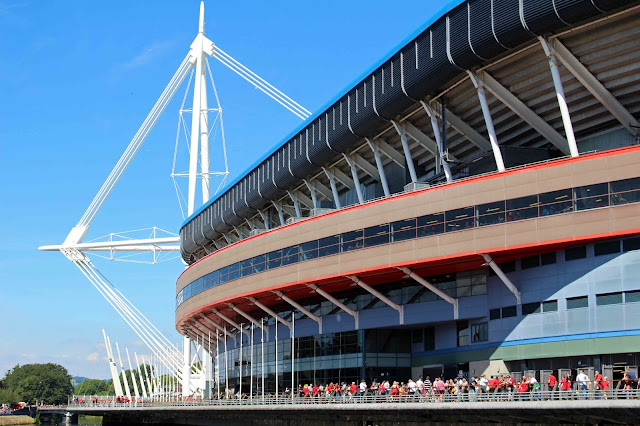 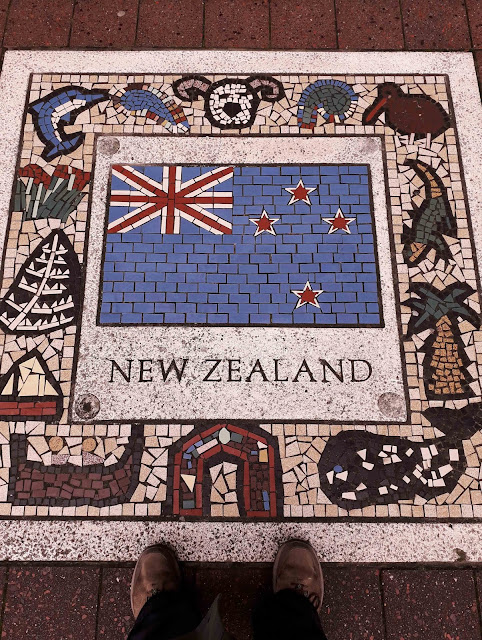 But this post is not about the stadium itself (you can read more about that on its website). The stadium sits alongside the River Taff, and there is a riverside walkway that takes the pedestrian past one of the stadium’s entrances. There, under your feet, you can see a series of mosaic panels representing the nations that took part in the 1999 World Cup.

The main countries have their own panels, with one that lumps together the ‘other nations’ – I’m not sure which they were. The panels show the flags of the various nations, together with symbols of those nations.

The New Zealand panel shown here includes a sheep, a kiwi and what is probably meant to be a tuatara (the lizard-type creature); a dolphin and a whale; a silver fern, red pohutukawa flowers and what’s probably meant to be a fern (as we do not have coconut palms in New Zealand); a sailing ship, a Maori canoe and, presumably, the ceremonial gateway into a Maori pa; a koru (unfurling fern frond) and one other item (top left), which I haven’t yet figured out.

The mosaics themselves are crude but I like the idea behind them and, twenty years on, they are still in reasonably good condition.

Posted by sconzani at 08:49 No comments:

What a difference a year makes! 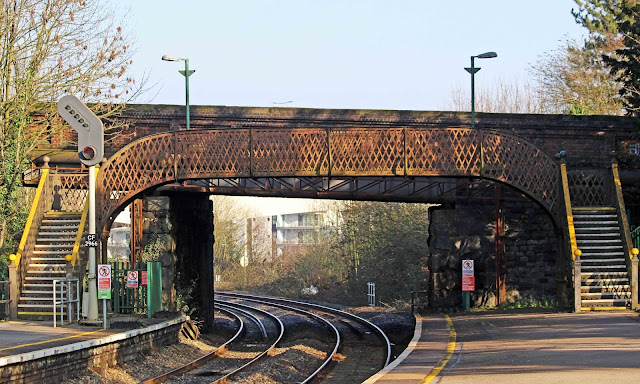 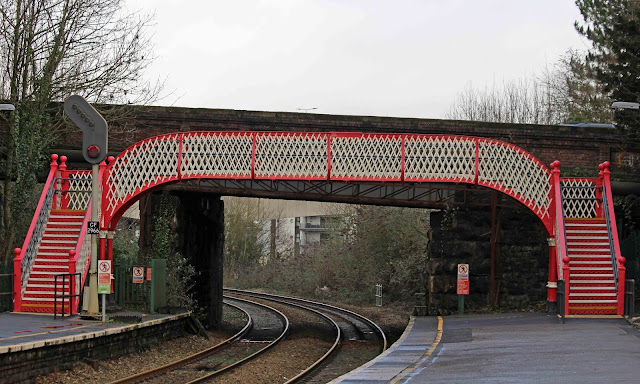 Well, almost a year – the top photo was taken in February 2019, the lower just a few days ago, and the transformation is obvious.

This is the pedestrian footbridge, built in the late 19th century to carry Cardiff- or Barry-bound train passengers over the tracks at Cogan railway station. This section of the Cardiff to Barry line opened to rail traffic on 20 December 1888 so I assume the footbridge was built prior to that but I haven’t been able to find an exact date. 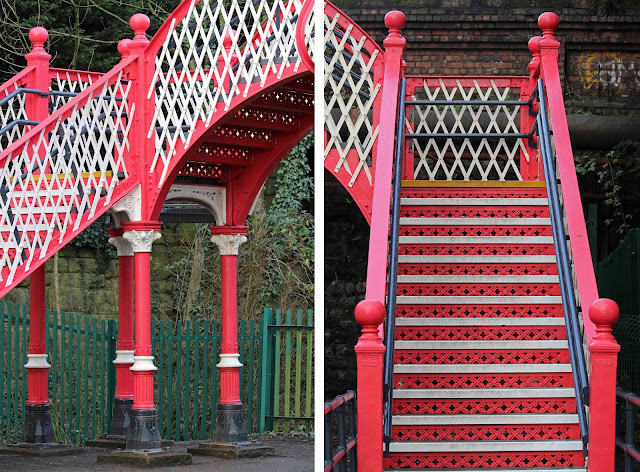 As there are several old footbridges similar to this one crossing the local lines, I was a little surprised to find that this particular bridge is Grade II listed. Here’s how it’s described on the British Listed Buildings website: 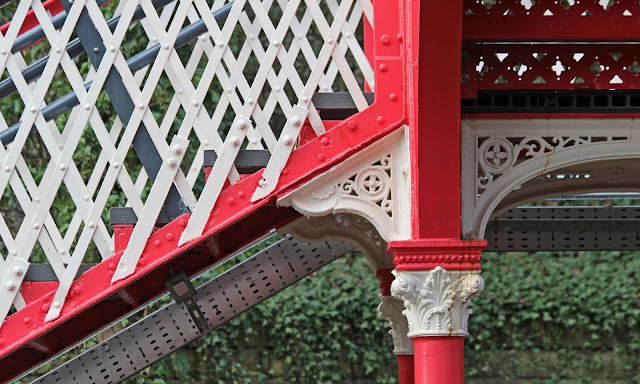 As my photographs show, the footbridge has recently been given a facelift. According to their website, the refurbishment work was carried out by Centregreat Rail & Engineering. The project involved the

There’s no mention of the paint job, nor any explanation for the choice of colour scheme – a hefty discount on ‘Lollipop pink’ at the local paint shop perhaps? – and it hardly seems appropriate for a Victorian railway bridge. But I certainly am glad the footbridge has been renovated rather than replaced, and it did look rather cheery on a grey winter's day. 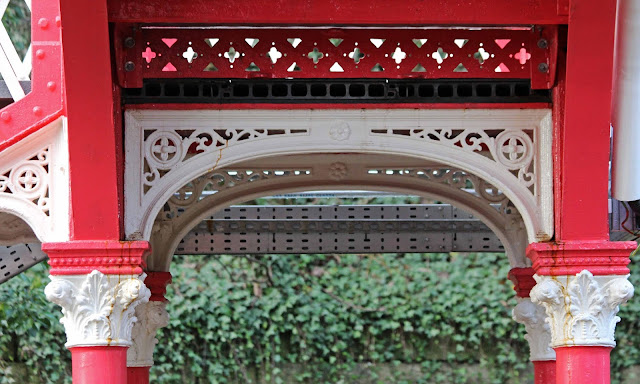 It seems a shame that this charming sculpture is not better positioned. Sitting between two of the three former Mount Stuart graving docks (once dry, now water filled) in Cardiff Bay, it’s half-way down a dead-end space, where there’s no other reason to venture except for a closer view of the sculpture. And so I seldom see – in fact, have never seen – anyone inspecting the terrific trio in their tiny tub. 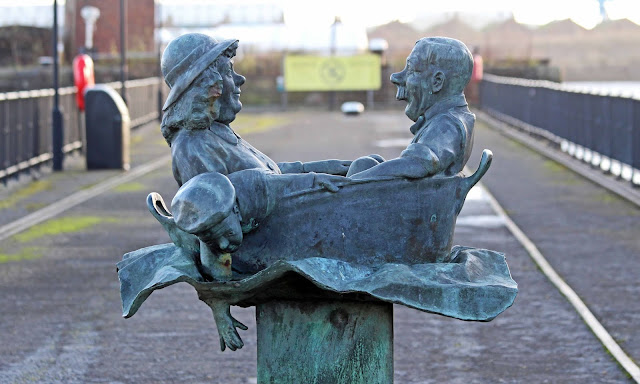 Punningly titled, Wife on the Ocean Wave, this wonderful piece was created by sculptor Graham Ibbeson in 1993. In the artist statement on his website, Ibbeson explains the inspiration behind all his artworks:

I have always tried to use humour as a tool to draw people into my work, to enable them to look at themselves through laughter. My work has changed over many years of moving forward through the creative landscape, however, my motivation remains the same. I am influenced by the absurdities of this life and the people who inhabit my world. The small, tiny things that make up the whole picture, hoping as always, that humour opens a path to the truth.

Ibbeson succeeds brilliantly, in this and in the 30-something other sculptures that improve and enhance public spaces throughout Britain. (Click on this link to see a gallery of his public sculptures on the author’s website.)

Back to the boat, and its three delightful figures, a woman, a man and a young lad. The elderly gentleman looks gleeful, his eyes glinting, a  boyish look of genuine fun-loving joy lighting up his face.

The woman looks more hesitant – there’s no open-mouth smile on her. Perhaps she’s a reluctant passenger in the tub. Perhaps she can’t swim.

And the lad – his face is the hardest to read, as he reaches one hand through the wave. Is he concentrating on something he sees? On grabbing what he has seen? And what is his hand reaching for? Why, a cute little fish, of course. The perfect finishing touch to this charming piece. 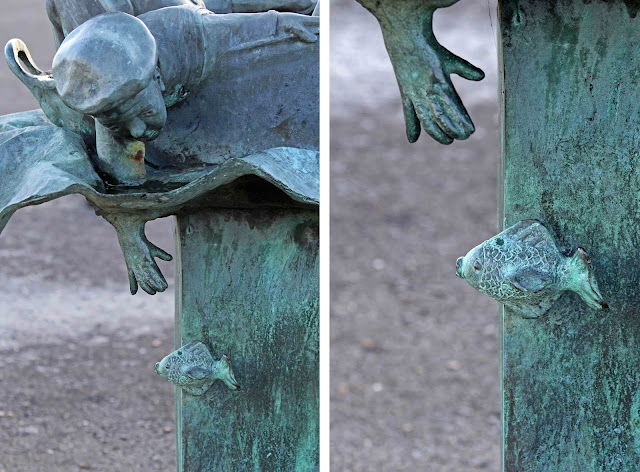 Constructed originally in fibre glass, then cast in bronze, Wife on the Ocean Wave stands 152cm tall. Access to it is unrestricted so, next time you visit Cardiff Bay, do make the effort to see it. Opposite Techniquest, on the finger of land between graving docks two and three, under the looming menace of a huge old cargo crane, follow the meandering path for a heartwarming laugh. 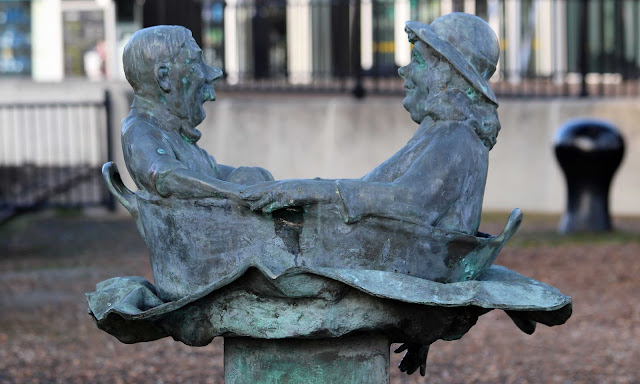