This was the first of what we hope will be many ‘Walks with Mary’, retracing the footsteps of Dr Mary Gillham, revisiting places Mary knew and loved, observed and recorded.

Ours was a very informal walk, a fungi foray by members of the Glamorgan Fungi Club that turned into more of a nature ramble. It was organised by Calum Macintosh, who knew Mary from the days he worked at Forest Farm Nature Reserve and found the site for our walk when reviewing Mary’s slides (now being posted to Flickr). Also along for the walk were Cliff Woodhead, who was the voluntary warden of nearby Coed-y-Bedw Nature Reserve for over 20 years and a friend of Mary’s; Emma, Chris and Annie, three current volunteers on the ‘Dedicated Naturalist’ Project; and Barbara Brown, OPAL Community Scientist in South Wales.

In the Mary Gillham archives we have a trip report Mary wrote after visiting what she called the cemetery woodland in October 1992. The local council, which referred to the area as ‘Ancient Semi Natural Woodland’ in a letter to the Glamorgan Wildlife Trust, had applied to enter the area into a woodland grant scheme and were seeking the Trust’s observations about the application. The Trust in turn sought Mary’s views, so she completed a survey of the area. Though she had a couple of reservations and some alternative suggestions for parts of the wood, Mary was generally in favour of the plan. 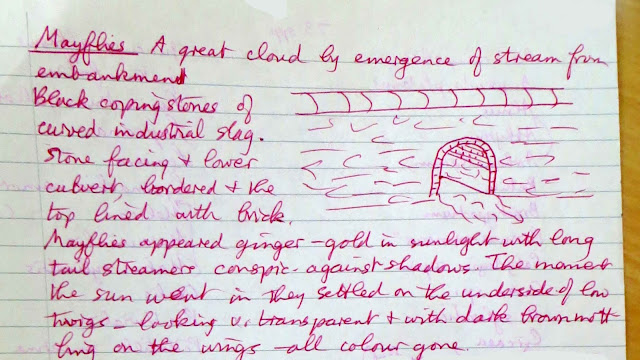 Her report notes ‘a sunny clearing full of dancing mayflies’ and another area with a ‘flock of mixed long-tailed, coal and great tits, at least 50 strong’, and she lists an impressive 73 species of trees and plants but names only 4 species of fungi.

Like Mary we found ‘a veritable honeycomb of footpaths’ but, as fungi were our main focus, our species list isn’t anywhere near as impressive or as extensive as hers, though we did find more fungi. Here’s our list:

If you liked the Beastie Benches, you’ll love Cargoes. This is another of ’s superb public artworks, though you can’t sit on these ones and, unfortunately, their positioning on building walls in and Stuart Streets, amidst the distractions of restaurant and shop signage, means they are not easily appreciated and frequently overlooked.

Just like the Beastie Benches, the 21 panels of this artwork were inspired by poetry, in this case John Masefield’s poem Cargoes. This is a poem I actually learnt in high school, though it seems an odd choice for the school syllabus. And, though John Masefield’s only connection with  appears to have been a passing one – he caught a ship from here to in 1874, the subject matter is certainly relevant. was once one of the largest docks in the world, handling the export of huge quantities of iron and millions of tonnes of coal from the south coalfields, and all manner of cargo passed through its basins and warehouses.

The sculptor of Cargoes, Brian Fell, is one of ’s leading artists in steel, and his public artworks can be seen throughout the . has two more of his major pieces, one of which is a particular favourite of mine – but more on that in a future blog.

As you will see below, Fell’s panels illustrate the various items named (in bold type) in Masefield’s poem (from Salt-Water Poems and Ballads, edited by John Masefield, , 1944, p. 124). 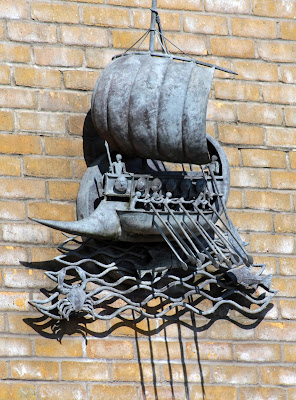 
Quinquireme of from distant Ophir,
Rowing home to haven in sunny ,
With a cargo of ivory,
And apes and peacocks,
Sandalwood, cedarwood, and sweet white wine. 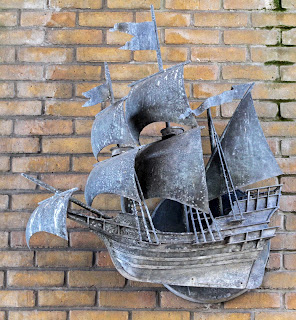 Stately Spanish galleon coming from the Isthmus,
Dipping through the Tropics by the palm-green shores,
With a cargo of diamonds,
Emeralds, amethysts,
Topazes, and cinnamon, and gold moidores. 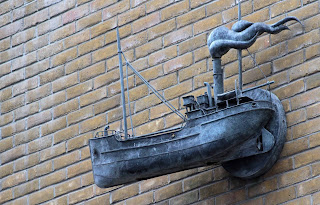 Dirty British coaster with a salt-caked smoke stack,
Butting through the Channel in the mad March days,
With a cargo of coal,
Road-rails, pig-lead,
Firewood, iron-ware, and cheap tin trays.

Posted by sconzani at 22:05 No comments:

Wherever I turn, there’s Mary

Dr Mary Gillham was an extraordinary naturalist. When she died in 2013, at the grand age of 91, she left her massive archive of biological sightings and information, slides and diaries to SEWBReC, the South Biodiversity Records Centre. With the help of a two-year Heritage Lottery grant, SEWBReC has begun the ‘Dedicated Naturalist’ Project to decipher, digitise and record Mary’s material, and to ensure her incredible achievements are known and recognised.

Since I first heard about Mary Gillham at a SEWBReC biological recorders’ training course on 15 February 2016, she seems to pop up wherever I go.

The Thursday after the course I went and chatted to Al Reeve, the project officer, about volunteering on the project, and I started my first day’s volunteer work on the 23rd. But, even before I got started, Mary began appearing in my life. I mentioned the voluntary work in an email to a friend and he replied:

Dr.Mary was a lovely character, amazingly knowledgeable. When I first started working at Forest Farm, she gave me a lot of advice about the area around the farmhouse; and about what species were rare in the general area (so what we might want to plant/seed "out and about"). Would pop in and chat to volunteers from time to time about matters wildlifery. Top woman, ever so helpful.

On my first day I was reading Mary’s diary of her time in and almost immediately came across the name of an author I had worked with during my publishing career in . I contacted her to see what she could remember of Mary and this was her response:

… I do remember she did pretty well out of Massey and . She got herself appointed warden (Matron we said then) at Moginie – free board and lodging – but she didn’t mean to be there too much – she was away on the Cook St islands as much as possible researching the effects of seabirds on coastal vegetation or something.

When I’m out walking I seem to find myself involuntarily walking in Mary’s footsteps. On a glorious spring day in mid March I went for a wander around and found myself thinking Mary would be delighted to see that wildflowers are re-wilding the man-made paths of gravels and concrete where her records show wildflowers once grew in abundance. On Good Friday I was walking the Taff Trail, the section from the bridge down to the bay, and couldn’t help but check if the plants I had been transcribing from Mary’s records the previous Tuesday were still growing there. (They weren’t.)

Last Saturday I went on a foray with my friends from the Glamorgan Fungi Club and there she was again. One of the women is a member of the Cardiff Naturalists Club (as was Mary) and was involved in sorting out all the unsold copies of Mary’s numerous publications after she passed away.

Our fungi club leader also told me that his mate Brian had been telling him stories about Mary recently over a pint or two at their local pub. It seems Brian had sometimes acted as Mary’s scribe when they were out walking and frequently got told off for not paying attention or not writing quickly enough.

And just yesterday I got this email from a local friend:

Mary Gillham is a name from the past!

When we moved to I took courses at what was then the extra-mural department of the university, particularly picking out those with field courses. It seemed a good way to get to know the area - and it was. Geology was the best, led by John Perkins, who was also head of department. His field trips were in the summer, but he also led an informal group of walkers (the Hummocky Drifters) in the winter "so that they could get fit for the formal summer trips" ... and the winter rambles were free!

I can't claim to have known Mary, but she did come on some of John's field trips, because they often went to locations where the botany was good, too. I remember one occasion when John chided Mary, when the botany talks took up precious time meant for geology. But it was all good natured, as everyone enjoyed a wide range of interests and the social atmosphere was as important as the subject.

Mary, if you’re listening, I think this is just the beginning of a long journey together!