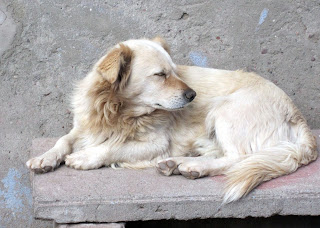 When I was looking for a suitable title for this blog, I immediately thought of ‘it’s a dog’s life’ but then wondered whether that was a positive or negative statement. After all, many dogs have an easy life, eating, sleeping, barking, sniffing, scratching. But dogs can also lead a miserable existence, starved and beaten, used for fighting, maltreated, or living wild. It seems the expression initially had negative connotations, having first been recorded in a 16th-century manuscript where it alluded to the miserable, subservient existence of dogs during that era.
Here in Cusco both sides of the story are true. Some dogs are well cared for, pampered even, and these poor pooches are often dressed by their owners, sometimes in clothing obviously made specifically for dogs, sometimes in family cast-offs. I feel sorry for these dogs as the clothing is certainly not needed for protection from the elements and the dogs themselves often seem to look embarrassed – if that’s possible!
But, for the majority of Cusco’s dogs, life is tough. They frequently look malnourished and diseased, with matted coats and obvious injuries, from being hit by cars, fights among packs or from being beaten. They spend their lives roaming the streets, scrounging desperately for food. 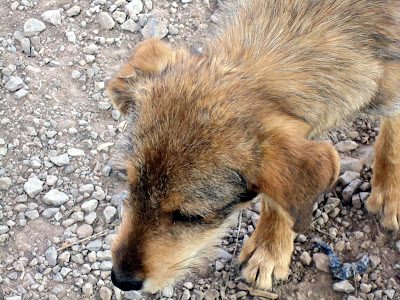 There are thousands of dogs here – in fact, I’ve never seen so many dogs in one place before. The problem seems to be a complete lack of population control. The cost of veterinary services for neutering dogs is beyond the reach of most Cusquenians and even those who can afford it don’t seem to choose that option. Instead, when their female dogs are in heat, they let them roam the streets, pursued by packs of eager male dogs.
Here, the sound of dogs barking and fighting can frequently be the cause of a sleepless night. And, with so many dogs on the streets, you also have to watch carefully where you walk. No litter control laws here!
Dogs can also be dangerous, of course, and as the dogs here can carry rabies, you have to be careful to avoid being bitten. Soon after I arrived I was told that the best way to scare off a dog is to bend down, as if picking up a stone to throw. Even if there are no stones, dogs recognise the action and run away – a sad comment on the society they live in.
Peru has its own native dog, one of several breeds of hairless dog, though some have tufts of hair on their heads, feet and the tips of their tails. I think they’re quite ugly, but the locals obviously like them – a huge replica was paraded through the streets during a festival here in June.
The charity I work for, Globalteer, plans soon to begin assisting a local organisation with a stray care and neutering programme. Volunteers from around the world will come to help care for the local dogs and their donations will fund the programme. The project’s goal will be to nurture the animals back to health through loving care and veterinary treatment at the hands of project staff, veterinary students and volunteers, and whenever possible place the animals in caring adoptive homes. In my opinion, it can’t happen soon enough!
Posted by sconzani at 17:55 No comments:

Since I first arrived here in Peru, I’ve been taking photos of the elaborately dressed crosses found outside most churches but when I googled the subject today, in preparation for writing about it, all I got was references to transvestism and the church’s attitude to it.
The cloths draping the crosses are beautifully decorated, with rich embroidery and sumptuous colours. I thought the colours might be liturgical colours – violet or purple for the penitential season of Lent, white for Christmas and various feast days, red for Palm Sunday, Good Friday,etc – but here the same draperies often stay on the crosses for weeks and bear no relation to the Catholic Liturgy.
So, at the moment, I’m none the wiser about the meaning of the colours, nor, in fact, do I really understand the reason for dressing the crosses in the first place. Enlightenment welcomed!