During a recent thirst-inducing walk along the coastal path from Rhoose to Barry, I was delighted to notice an old drinking fountain when we finally reached Barry’s Cold Knap Park. Unfortunately, the fountain no longer works so we were ‘forced’ to visit a cafe across the road from the park, where they also sold nice cakes – a real hardship! But I have a bit of a thing about old drinking fountains (see my post on Penarth’s drinking fountains here and some in Cardiff here, so I’ve been trying to find out more about this one.

It seems the lack of drinking water has long troubled visitors to this area: in the Barry Dock News of 14 September 1906 an article reported the minutes of the latest Council meeting, at which the issue of a water supply for Romilly Park had been raised – that park is just across the road from Cold Knap Park, which did not exist at the time (that same newspaper contained an article reporting that the trustees of the Romilly Estate had decided to sell the land along the foreshore between Barry and Porthkerry where Cold Knap Park is now located). 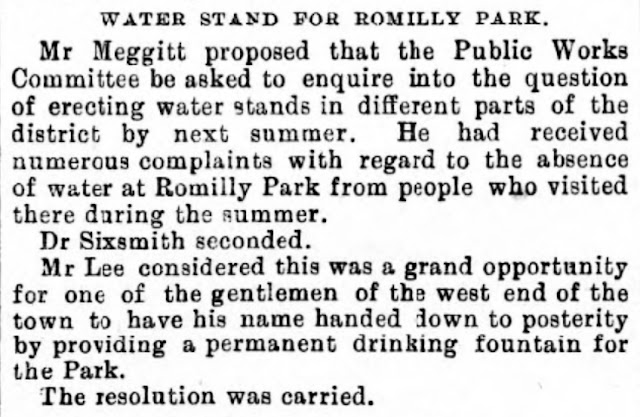 And, in a letter to the Barry Dock News published on 26 August 1910, ‘Holiday-seeker’ raised the scandal of ‘pleasure-seekers’ picnicking at Cold Knap having to pay twopence to a local farmer for a kettleful of water to prepare tea – outrageous! 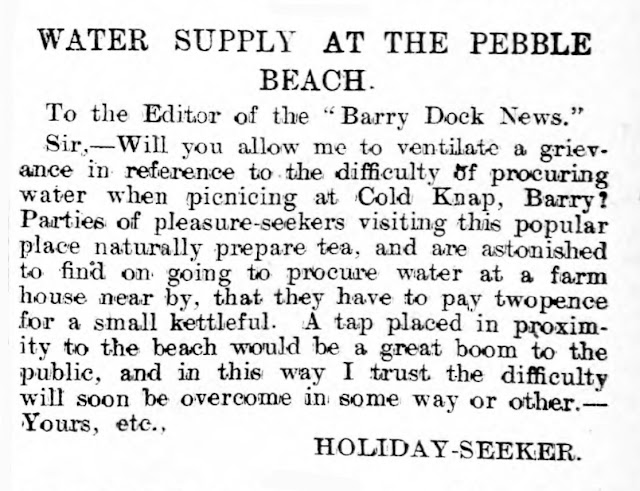 According to a Coflein report I managed to locate (Coflein is the online database for the National Monuments Record of Wales), the main construction phases of Cold Knap Park can be dated to the 1920s, and the Knap
Lido, which was located within the park and was one of the largest open-air swimming pools in Britain in its heyday, was opened on 1 May 1926. (The Lido closed in 1996, its buildings were demolished and the pool filled in during 2004.) So, I assume the drinking fountain also dates from the mid 1920s. 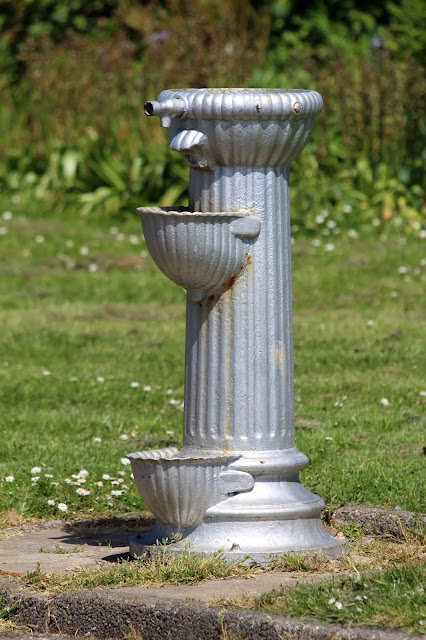 This date ties in well with an unofficial comment about the fountain that I found on the Friends of the Knap Gardens Facebook page.

The post, dated 31 August 2016, contained comments about the recent sprucing up and painting of the old drinking fountain, and local resident Joanne Creek commented that she believed the drinking fountain had been installed in 1926 and had been cast by Goulds foundries of Barry – the firm of W. H. Gould, Iron and Brass Founder, was based nearby in Barry Dock.

Joanne had also been lobbying the local council to have the water supply reinstated but, sadly, had not been successful.

The Coflein report confirms that the drinking fountain is, indeed, made of fluted cast iron, with two bowls on one side, and I have since discovered that the bottom bowl was intended for use by dogs needing a drink – brilliant idea!

The structures within Cold Knap Park are Grade-II listed so I hope this means the drinking fountain will be protected for future generations to admire, if not to use. I’m sure the local Friends group will be keeping a watchful eye on it.

I realised when compiling my previous blog, in celebration of National Mills Weekend, that I had never written about one of the windmills I’ve visited in East Sussex, the one located in the historic old town of Rye. 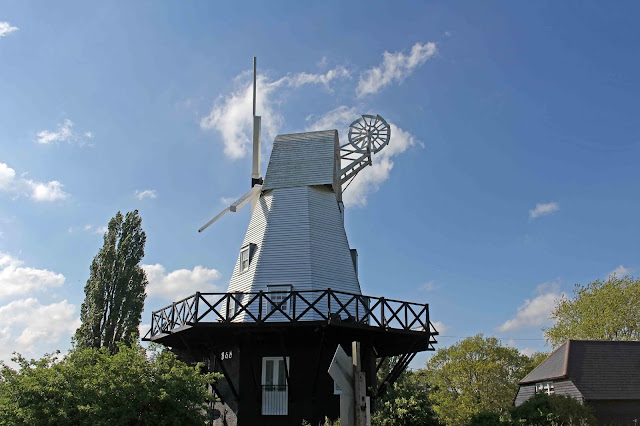 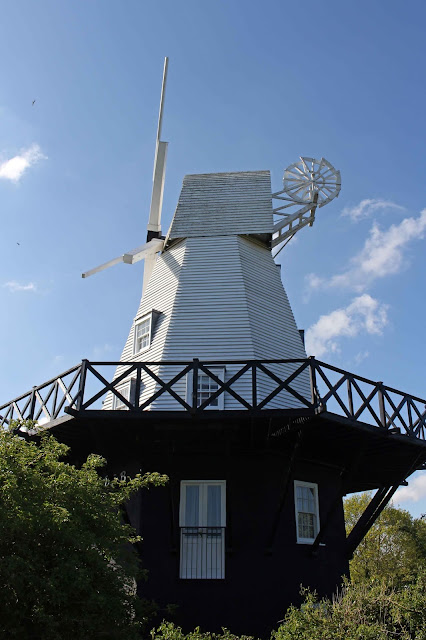 This grade-II-listed building is a reconstructed smock mill and it sits alongside the river Tillingham, a very short walk from the centre of Rye, but this is not the first mill to have been built on this site. According to the windmill owner’s website, which references the 1594 Symondons map of Rye, there has been a mill here since at least the sixteenth century. It goes on:

The first recorded owner of a Rye Mill was Thomas Chatterton who built a 'post mill' in 1758. After his death his widow, Mary, passed it on to a Frederick Barry who demolished the 'post mill' in 1820 to erect a 'Smock Mill', similar to the one we see today. Milling continued until 1912 when the premises became a bakery. Eventually to be owned by the Webbs, a well regarded family of Rye bakers who were to become custodians of the Windmill for over 60 years.

Unfortunately, on a Friday 13th in 1930, the ovens of the bakery overheated and destroyed the wooden structure on the mill, leaving just the two story brick base. The mill was reconstructed in 1932 and it continued as a bakery until 1976. The ovens were put to good use when the mill became a pottery. The original oven doors can be seen in the base of the Windmill.

Since 1984, the mill has operated as bed and breakfast accommodation – now wouldn’t that be a special place for a weekend away? (No, I’m not on commission and I haven’t stayed there ... yet.) You can find out more about the mill and see some wonderful old images, both photographs and paintings, on its website. 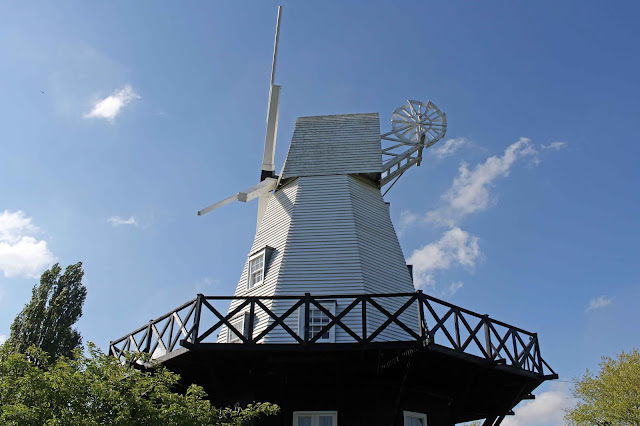 Posted by sconzani at 16:33 No comments:

This coming weekend, 11 and 12 May, is National Mills Weekend, an annual event organised by SPAB, the Society for the Protection of Ancient Buildings, to celebrate Britain’s wind- and water-milling heritage.


Wind and water mills, some not usually open to the public, creak open their doors and welcome visitors who want to explore their fascinating innards. This year the focus is ‘A nationwide celebration of Britain’s mills in pictorial form’. As the SPAB press release explains:

With their quirky shape, elegant sails or distinctive waterwheels, it’s not surprising that windmills and watermills appear so frequently in paintings and photographs, posters and postcards. These instantly recognisable buildings feature in some of Britain’s favourite works of art too: in a recent poll, John Constable’s The Hay Wain, featuring Flatford Mill in Suffolk, was voted the nation’s second best-loved painting.

Why not go and visit a mill near you this weekend? The SPAB website provides links to events up and down the country.

Not being particularly handy with a pencil or paintbrush, my salute to Britain’s mills is in the form of photographs. I’ve blogged about those I’ve seen in Cheshire (watermills) and Sussex (windmills) and here in Glamorgan (one very much neglected windmill ruin). Here’s the list so far (I already have plans to visit several more), with links to the individual blog posts - just click on the mill's name if you want to read or see more.

In Sussex, the Argos Hill windmill 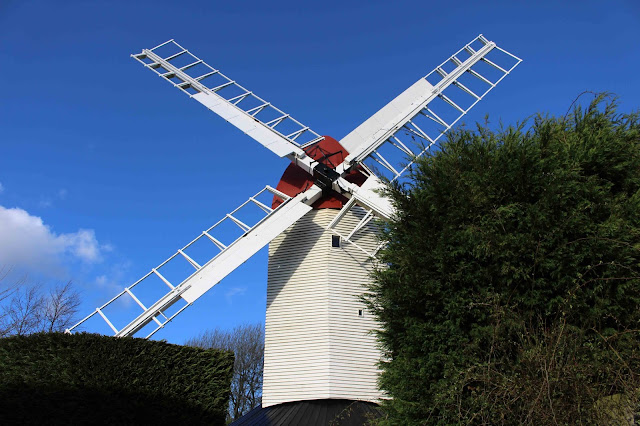 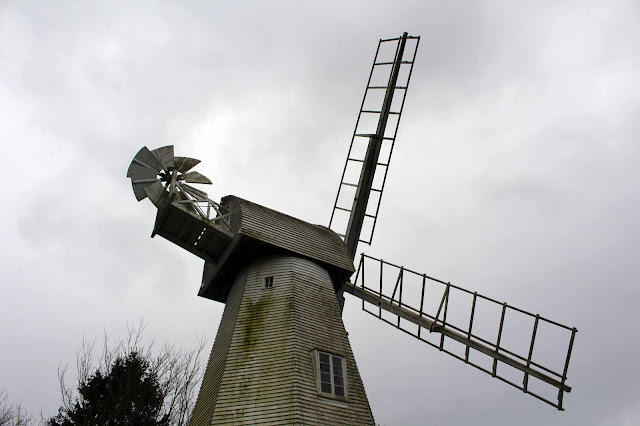 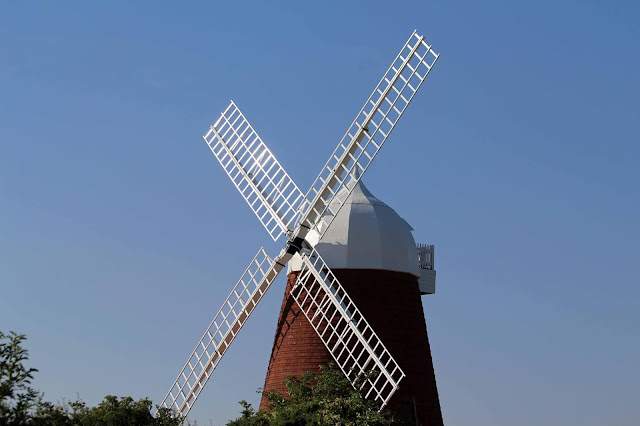 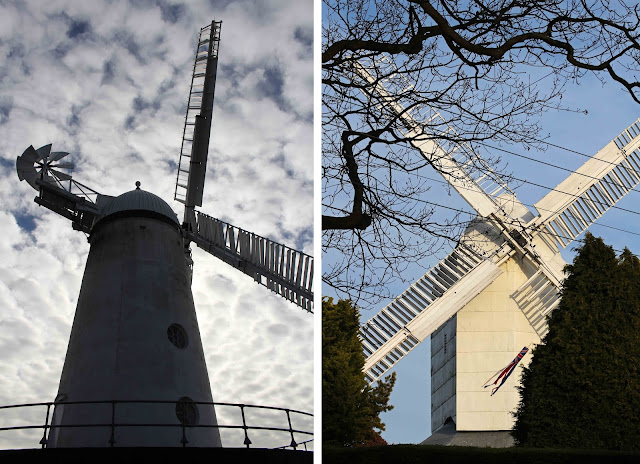 In Cheshire, two watermills: a mention and photos of Nether Alderley mill 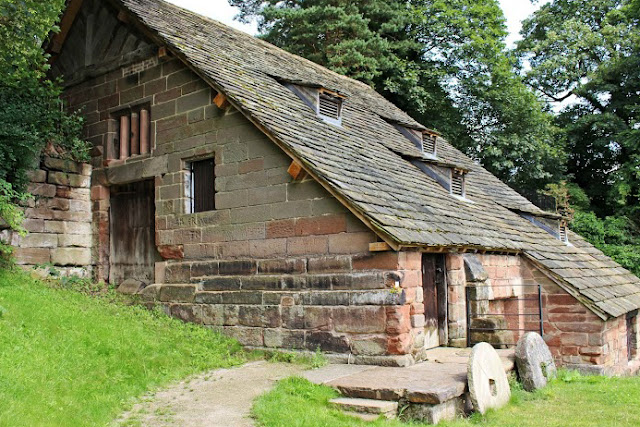 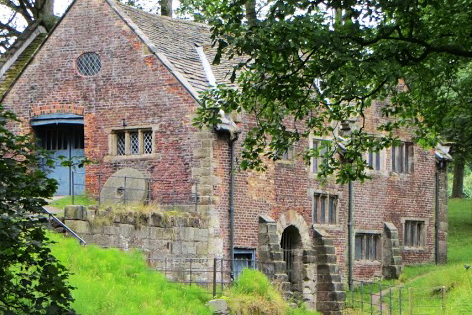 In Wales, the ruined and neglected and overgrown Hayes Farm windmill. 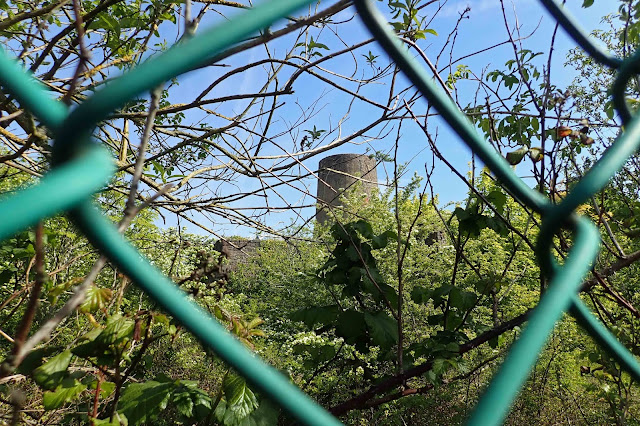 A few weeks ago I took you on a tour of parts of the Cuckoo Trail, a walking and cycling trail that runs along the path of an old railway line in East Sussex. Well, here in Penarth in south Wales, we have our very own rail trail. 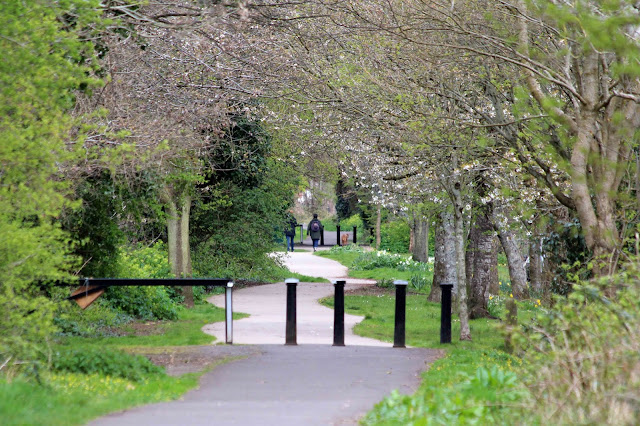 This is part of what was the railway line to Barry but, just as with the Cuckoo Trail, this local line also fell foul of the Beeching cuts in the 1960s. Goods trains stopped running to Barry on 7 October 1963 and trains stopped running through to the cement works (now long gone) in Cosmeston in November 1969, according to an article on Penarth railway station on Wikipedia. 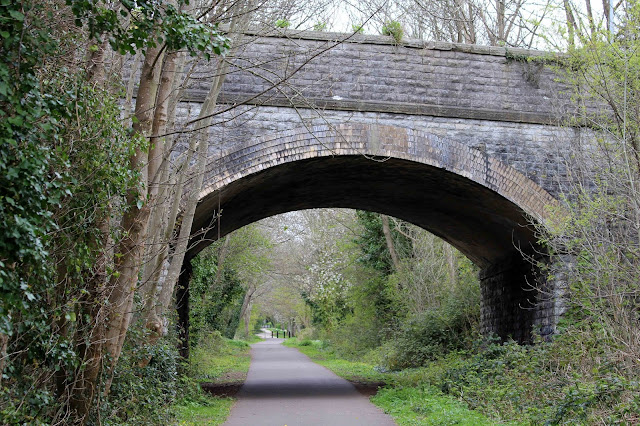 The passenger trains now stop at Penarth Station and, for two kilometres beyond that – though, unfortunately and rather short-sightedly, not accessible directly from the station – the trail has been converted, in part, to a much-used walking and cycle path. Also unfortunately and short-sightedly, the old track bed from Cosmeston to Barry was not retained in public hands – it would have been a wonderful public resource and environmental link to have a walking/cycling track along the entirety of the old railway line. 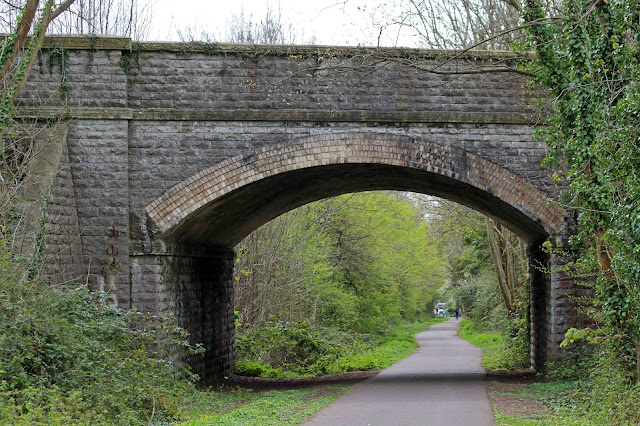 Though most of the indications of the former halts and stations have now disappeared, the four railway overbridges are all still in place, carrying road and pedestrian traffic across the rail trail. A couple have odd-looking metal attachments still hanging from them – some sort of signalling equipment perhaps? 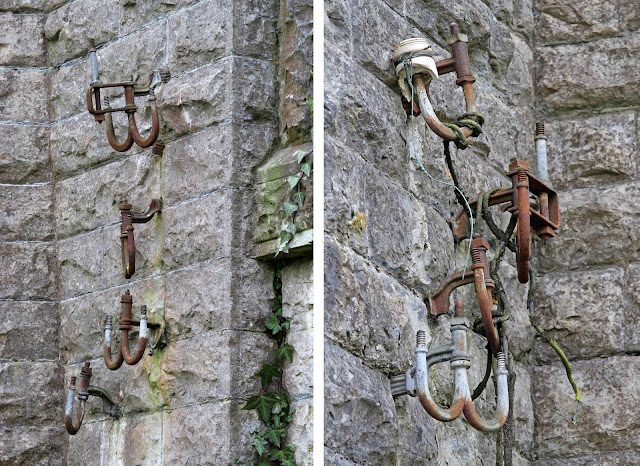 The trail is edged on both sides by houses and, indeed, encroached upon by a later housing development at one point – you simply walk along the pavement for a short distance. Though the trail only continues as far as Cosmeston Drive, it still provides a pleasant stroll along a tree-lined alley, which, depending on the season and the aggressiveness of the council strimmers, is also lined with wildflowers. 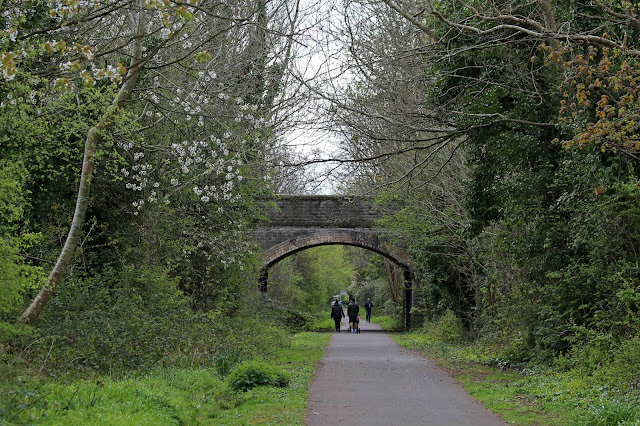 The rail trail also provides a nice sheltered spot to search for wildlife, mostly of the winged or small-and-crawling varieties, though a friend whose garden backs on to the trail has quite recently seen a fox, and I once spotted a slow-worm in greenery next to the tarmacced path (thanks to an inquisitive cat). You can see just a few of my local finds by heading on over to earthstar, my daily nature blog, and putting “Penarth rail trail” in the search box.

Posted by sconzani at 19:00 No comments: