The day started with a cold splash – no hot water in the gite at Aroumd, followed by breakfast at 7.30, then the half-hour hike zigzagging across the river and down a mule track to Imlil, where we retrieved our luggage and climbed back into our trusty van for another day on the road. We retraced our route through the winding gorge to the main road, then continued on mostly long, smooth roads from there to the coast.

After stopping briefly for drinks and a toilet break in an area where pink-flowering oleander bushes were growing wild along the riverbanks, we headed on to the outskirts of Marrakech, to a large supermarket to buy supplies for a picnic lunch. Olives, gherkins, camembert, bread, potato chips, tomatoes and nectarines – more than enough for 3 people – cost about US$8.50. The fresh food was particularly cheap and so tasty – it didn’t have the flavour bred out of it, as so much food in the West seems to these days.

Our lunchtime picnic stop was about 30 minutes outside Marrakech, at a roadside restaurant that allowed us to use a long table on the grass under their shady trees. The setting seemed almost Mediterranean, the ubiquitous cat appeared about a minute after we sat down, and chickens grazed in the grass for any crumbs we let fall. 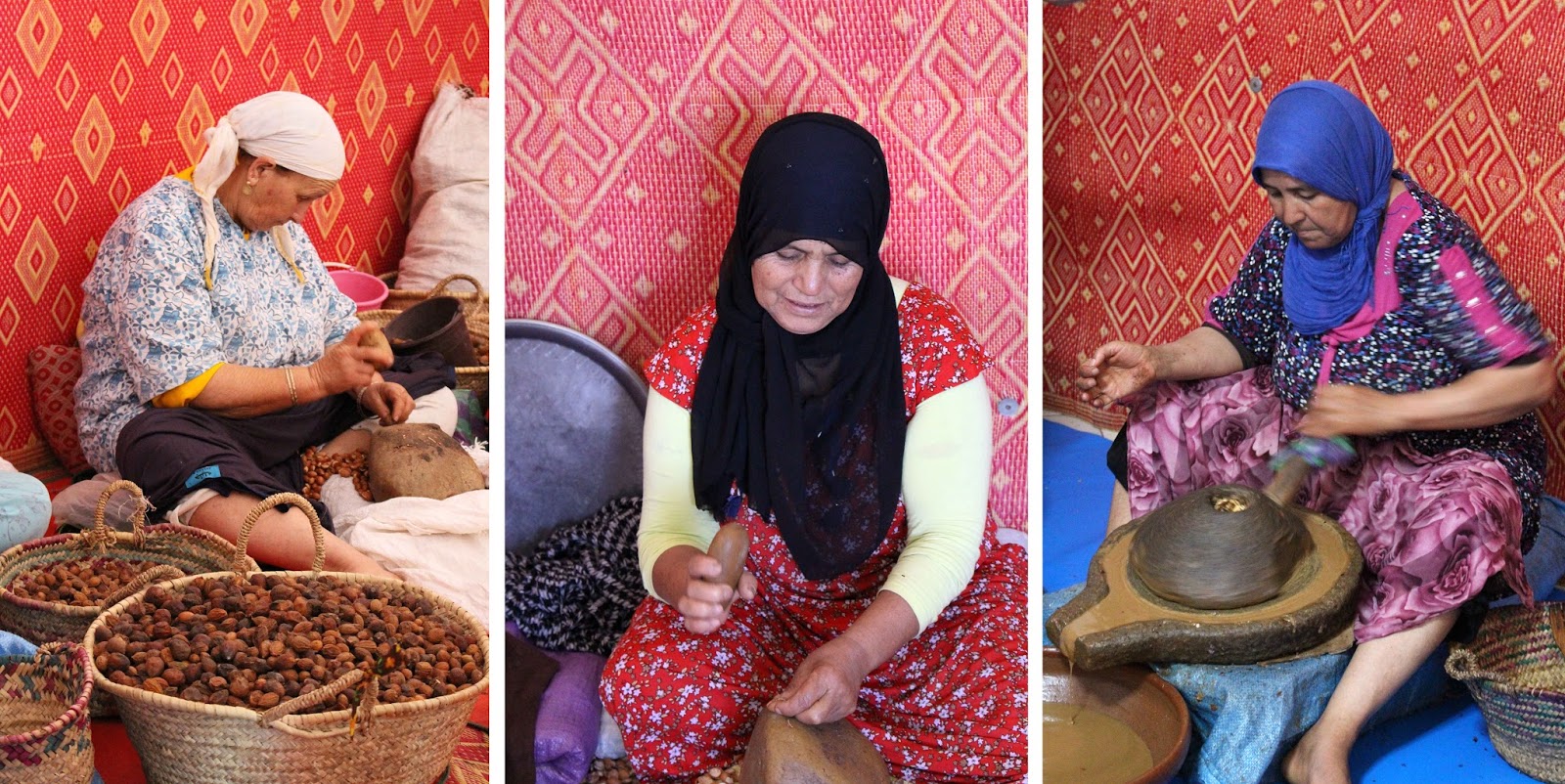 Onwards once again, with another stop about 20 minutes before we reached the coast, to visit a women’s co-operative where they produce oil from the seeds of the argan tree, labouring hard to remove the nut from its hard shell and crush it by hand in stone grinders to make the various cooking, hair and beauty products they then offer for sale. It was very labour intensive but the women work shifts, just a few hours at a time, and rotate the various tasks so each takes a turn at the more strenuous and onerous. The light wasn’t good for photos, sadly, as the women had amazing faces – maybe that’s the argan oil at work! 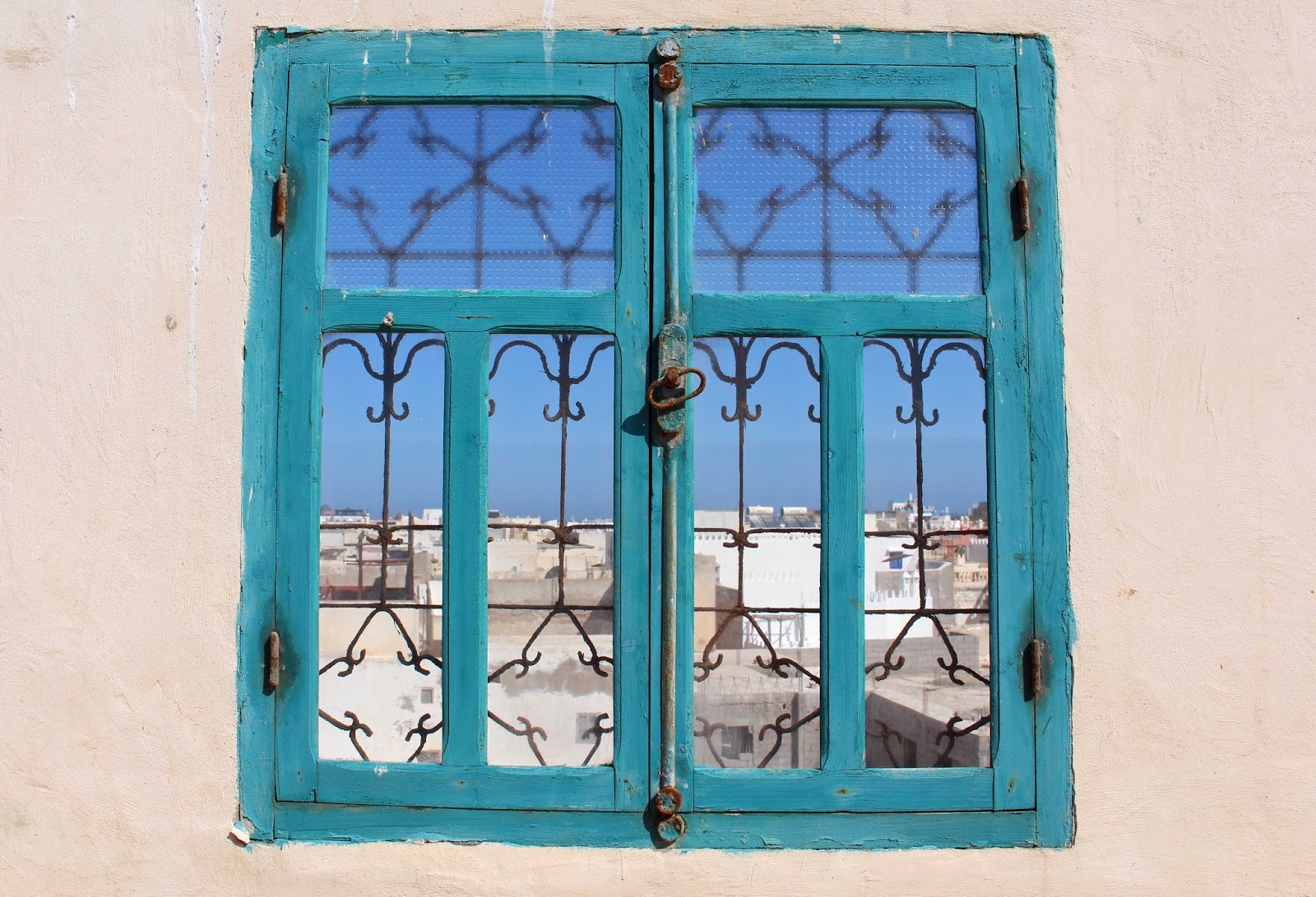 I fell in love with this place – being near the sea with refreshing sea breezes to lower the temperatures but still with plenty of sunshine; the hustle and bustle of the port in the mornings when the fishing boats come in with their catches; the freshest possible seafood, bought in one section of the fish market, cleaned in the next section, cooked and eaten at a tiny restaurant in the corner – SO delicious! 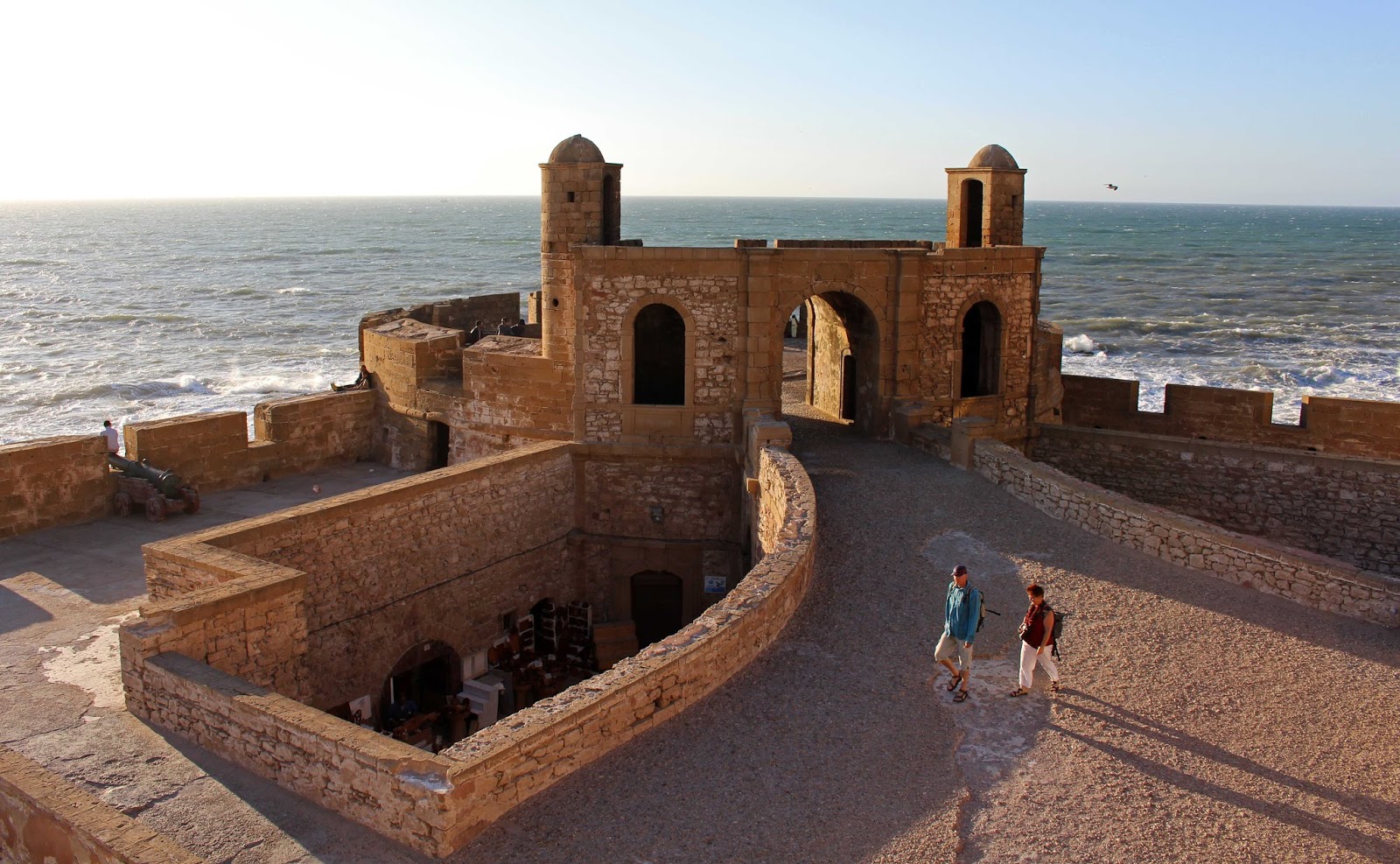 There is a long sandy beach stretching off south of the old city and, along the seaward side of the old city, a Portuguese-constructed bastion, with impressive towers and canon dating back to 1700s. The medina had been planned around a basic grid of several, relatively wide main streets but still includes a maze of narrow, winding alleyways, with beautiful carved wooden doors or blue-painted window shutters around every corner. The shops were full of tempting produce, from fresh fruit and pyramids of spice to colourful clothing and gorgeous paintings. The people were friendly, welcoming, always smiling and they all love cats. Indeed, the whole town seems dedicated to feeding and caring for the thousands of local cats – I saw a young guy patiently feeding tiny sardines to a sad-looking stray at the port, and we saw a box of abandoned kittens with a carton of milk and a syringe next to it so people could feed them.

On our first afternoon, our tour leader took us on an orientation walk, then we sipped cocktails while watching the sun set over the before enjoying a delicious, if expensive dinner at a local restaurant, while being entertained by local musicians singing hauntingly beautiful tunes in Arabic.

Our second day started with a walking tour around the old city with a friendly local guide. I always find it difficult to remember afterwards all the fascinating things these guides tell us but here are a few: Orson Welles shot the movie Othello here in the 1950s so there are hotels/restaurants/places named after him and the movie. The Jewish quarter of the medina can be identified by the Stars of David carved above the doorways. The buildings are no more than 4 or 5 storeys high as they’re not allowed to build taller than the tower on the mosque. The Portuguese had a trading and military settlement here in the 15th century but the Phoenicians were here as early as the 3rd century BC and the Romans came in the 1st century BC to harvest murex, a mollusc from whose shell they produced the purple dye used to colour the clothing of their imperial families.

We ended our tour at the artisan’s workshop for the local woodworkers – some beautiful marquetry and inlay work and intriguing puzzle boxes – and the silversmiths, where we were dazzled by the almost overwhelming array of silver jewellery. Time to shop!

For lunch, our leader Issam took a bunch of us to the local fish market to enjoy some of the wide range of local seafood. Finger-licking good! And then we each headed off to explore the city further, alone or in small groups. My cousin Julie and I lost ourselves in the alleyways of the medina, she got a traditional Berber design hennaed onto her hand, we shopped a little, we enjoyed ice creams at a café alongside the main square. Later, we joined a few others for more sunset cocktails and another delicious dinner. 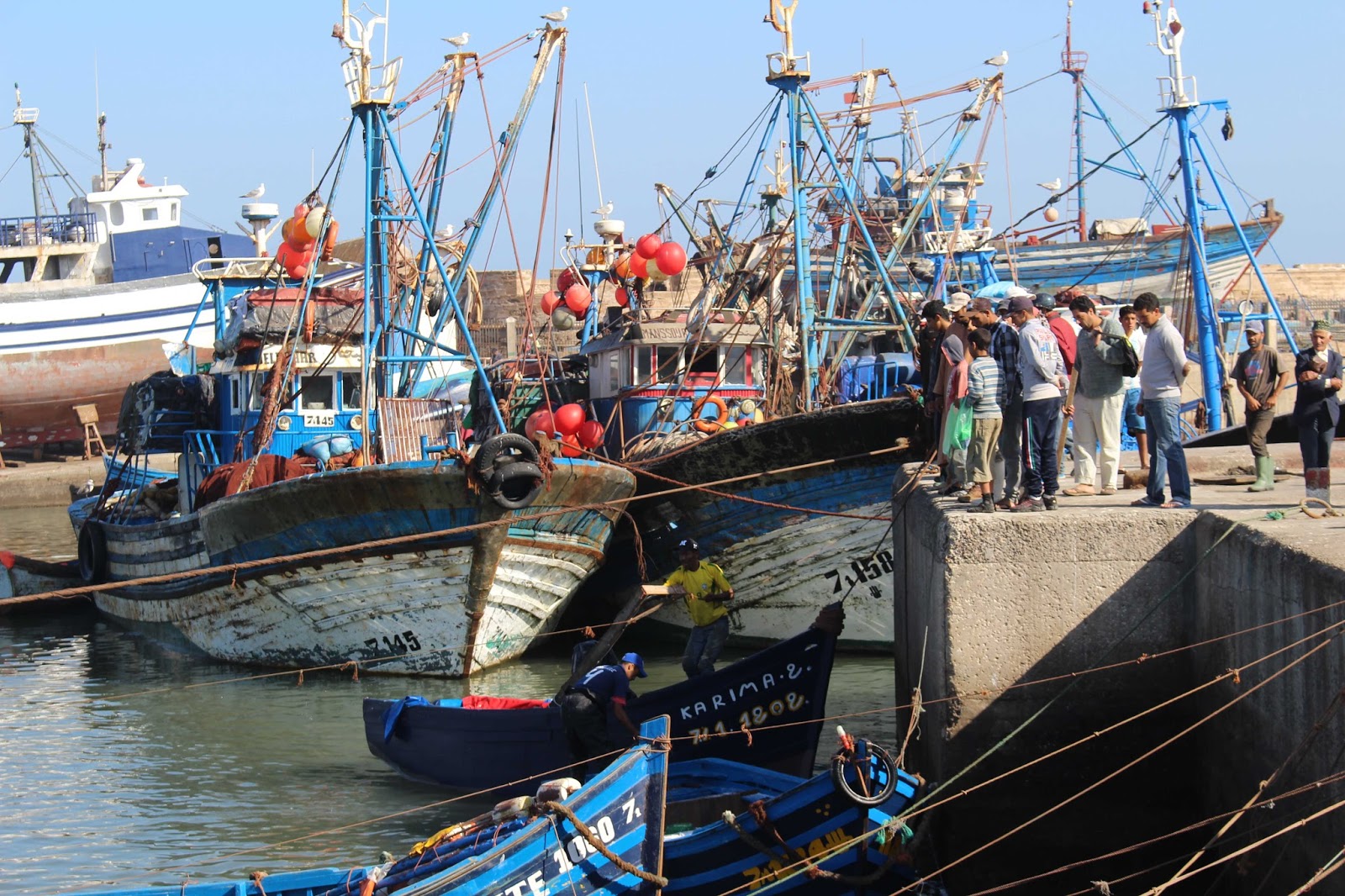 The next day our bus to Marrakech wasn’t till 2.30pm so a few of us went down early to the port and spent a couple of hours there, taking photos of the fishing boats coming in. The place was buzzing – fishermen were unloading their catches and tending to their boats and nets, then sitting around chewing the fat with their comrades, and the air was alive with seagulls, looking for an easy feed. It was a vibrant scene, full of sounds and smells and the vitality of daily life. I didn’t want to leave that place. I didn’t want to leave Essaouira – it was definitely my favourite of all the places we visited in . 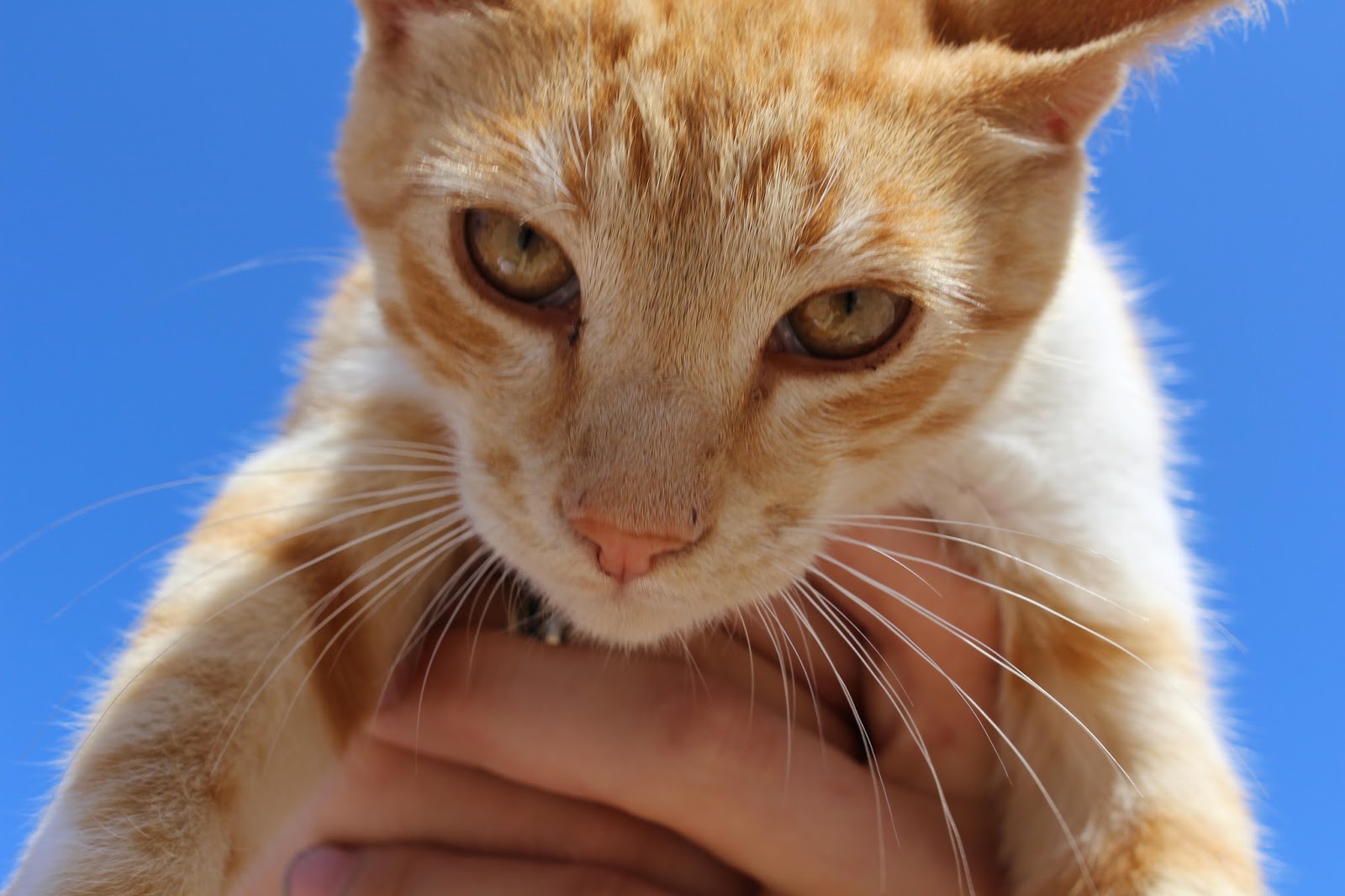