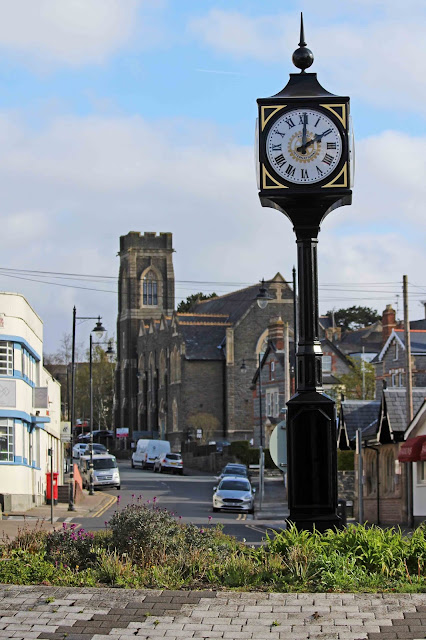 Town Clock
First up is our official Town Clock. Located in the centre of a busy roundabout at the junction of Penarth’s main street and four other roads, this four-faced clock was designed to coordinate with the Victorian architecture for which Penarth is well known (the town rose to fame as a seaside escape for busy Cardiffians during the Victorian era).

The clock, manufactured by renowned clockmakers J. B. Joyce & Co of Shropshire, was presented to Penarth by the local Rotary Club to celebrate the 50th anniversary of their local presence in 1987.

However, the current clock is not that clock. After ticking away for 20 years or so, the original clock started to lose time, showed different times on its different faces, and developed a degree of unreliability that locals found irksome.

Apparently, the local water company stepped up to fund the purchase of a replacement town clock, which looks exactly the same as the old one and which was installed on Sunday 4 November 2018. 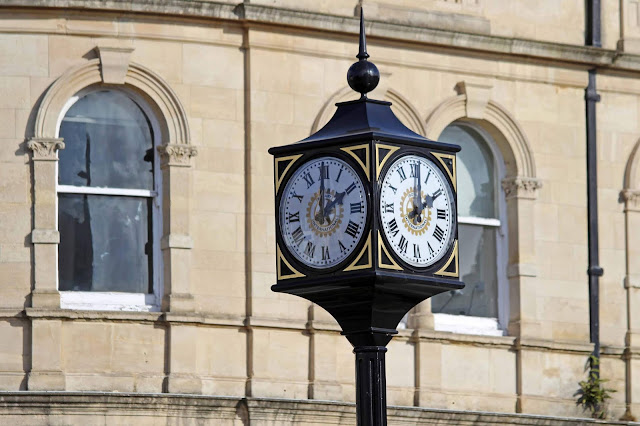 But what became of the old clock? Well, imagine my surprise when, just a couple of days after I had read the details of this replacement, my daily walk took me past Penarth Cemetery and there, plonked on the tarmac next to the old chapel buildings, was the clock. I have no idea what its long-term fate will be but the cemetery chapel is due to be renovated shortly so perhaps the old clock is being incorporated in that renovation in some manner.

Pier Pavilion clock
This is another tale of clocks being replaced. The original round Art Deco clock on the front of Penarth’s pier pavilion was presented to the District Council, in 1929, by a Mrs Esther Harris, partly in memory of her husband Hyman, who had long run a pawnbroker’s business in the town, and also in memory of her son Stewart, known as Solly, who was a casualty of the First World War. Private Stewart Ernest Harris, 8th Battalion, South Staffordshire Regiment, was killed at Ypres on 26 August 1915, aged just 22. 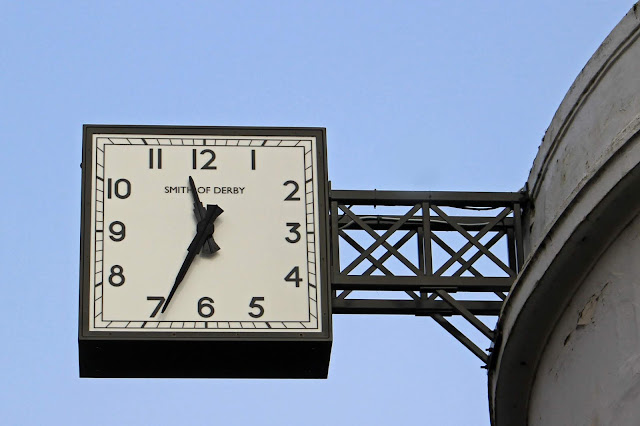 The new, square clock was installed when the pier pavilion was refurbished in 2013, thanks to the generosity of locals Paul and Geraldine Twamley. This clock, which also has a pleasing Art Deco look, in keeping with the design of the pavilion, was made by Smith of Derby, clockmakers to the nation since 1856.

Public Library clock
Penarth’s Public Library is a handsome building, built mainly of Pennant stone with Bath stone dressings, and it boasts the striking addition of a clock tower. 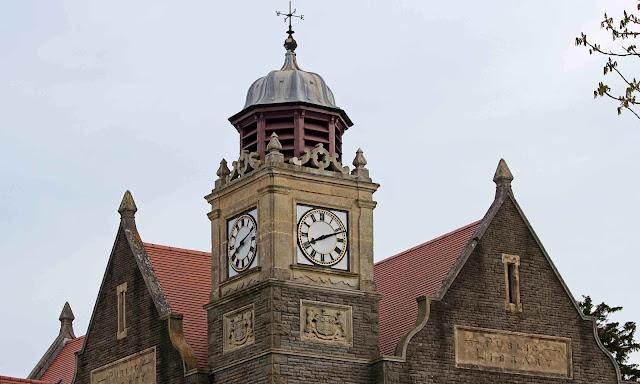 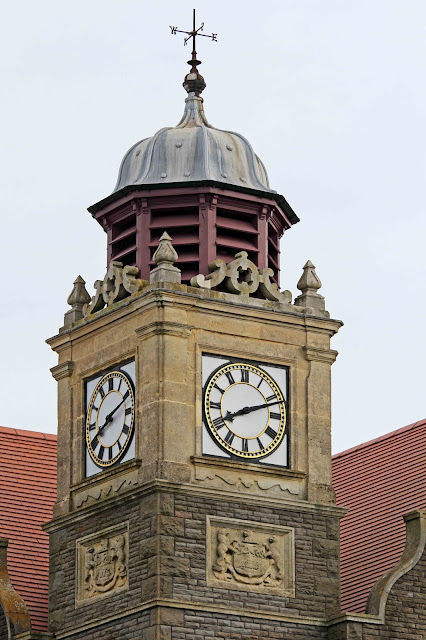 According to an article in The Cardiff Times, Saturday 17 September 1904, which was reporting the occasion of the laying of the foundation stone for the new public library (on 10 September), the District Council had ‘already voted a sum of money to provide a handsome tower clock in the tower, and Mr Robert Forrest has also generously expressed his intention of providing the necessary bell and striking apparatus.’ When the library opened on 30 August 1905, The Cardiff Times again reported the event (on 2 September 1905), including confirmation that Mr Robert Forrest had indeed ‘generously contributed £100 towards the cost of the clock in the tower.’

If you’re particularly fascinated by this clock, you can watch a very short video of it on YouTube, including its chiming of the hour. Prior to moving to Penarth, I looked at buying a flat in an old building opposite Penarth Library. The flat was nice, if small, and had a peep-of-the-sea view but I’m now very glad I didn’t buy it because I think the sound of the library clock striking not only every hour of every day, but also every quarter hour, might well have become very annoying.

In my last post, about St Dochdwy’s Church in Llandough, I mentioned that I had found something particularly stunning in the churchyard and this is it, the so-called Irbic cross. 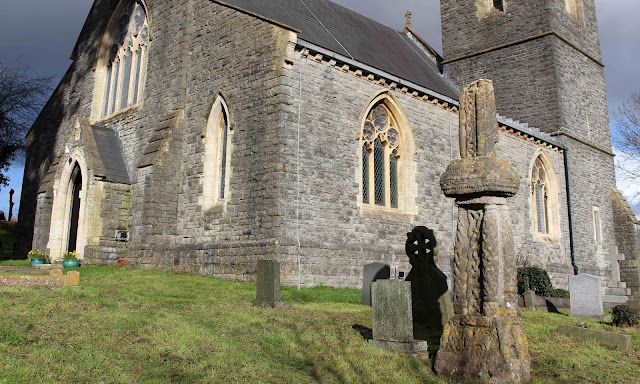 Made of Sutton stone, an Early Jurassic limestone found only in south Wales, the cross has a width of about 0.7 metres (2 feet 3 inches) and stands approximately 3 metres (a fraction under 10 feet) tall, though it is missing its top portion, the cross head, so would originally have been taller. The church website describes it as ‘consisting of an uppermost square shaft, with bold roll mouldings at the four corners, supported on a pedestal resembling a column, with the capital and base each formed from a separate stone.’ 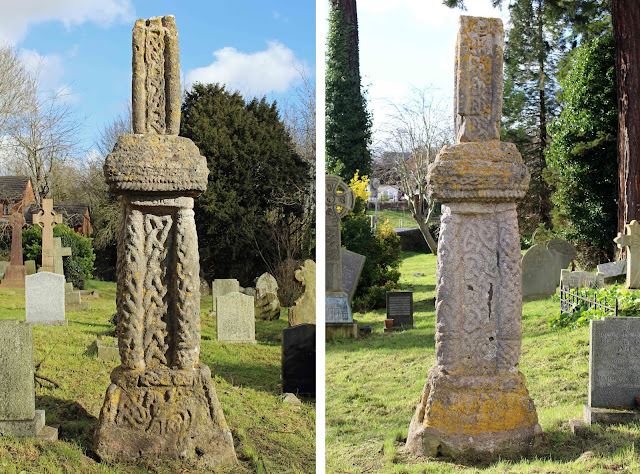 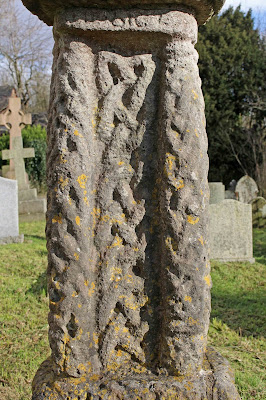 This incredible structure is thought to date from the 10th or 11th century. Its precise origins are not known but there has, of course, been much speculation. The name ‘Irbic cross’ comes from an inscription, IRBICI, on the front face of the cross. These letters apparently mean ‘the stone of Irbic’ but who was this Irbic?

Llandough, near Cardiff, was once an important centre of Christian influence when St Dochau established a monastic community here, known as Bangor Dochau, in the fifth century. He was also known as Cyngar and was the son of Geraint. His brothers were Iestyn, Selyf, Caw and Cadwy. Their grandfather was Erbin and it was probably to his memory that this splendid cross of Irbic was erected.

Other sources I have located tell a similar story. Certainly, this Erbin (or Erbic) must have been a particularly important and noteworthy person to have earned such an impressive monument to his memory. 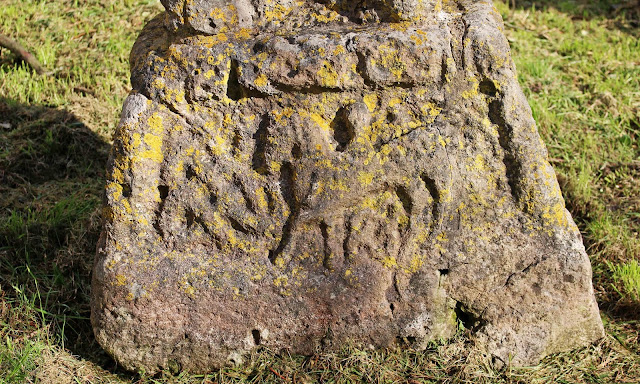 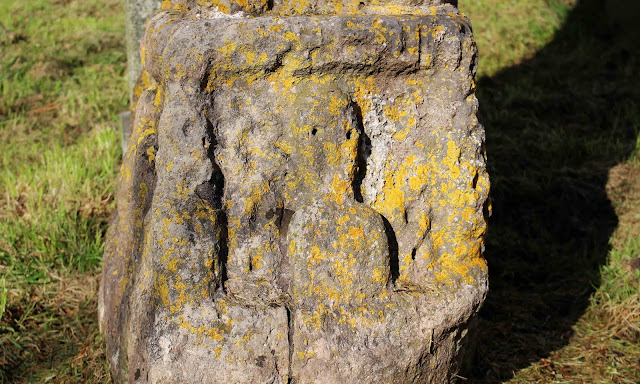 As well as the inscription, the cross is covered in fine decoration, as you can see in these photos. The base has a carving of a man on horseback on its front face and human heads on each side, and the shafts are covered with intricate, interlacing Celtic patterns.

The St Dochdwy’s Church website proudly boasts that the Irbic cross ‘is unique in design, being quite different from that of any other cross in Britain’. It is certainly a very fine ancient monument, and is well worth a visit if you happen to be in this vicinity. 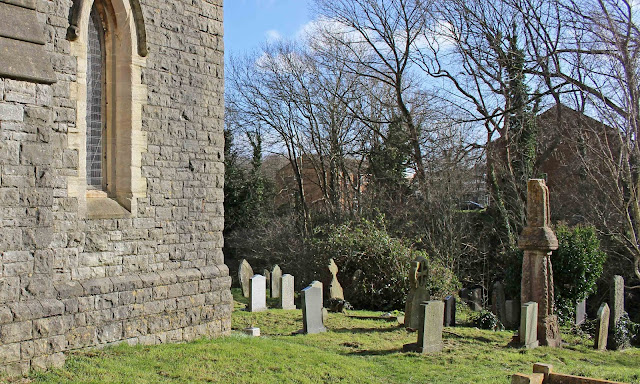 I noticed this church long before I got around to visiting it. That’s because its location, high on a hill overlooking the city of Cardiff, means its distinctive tower is visible from quite a distance, and it was my curiosity about that tower which prompted my visit. 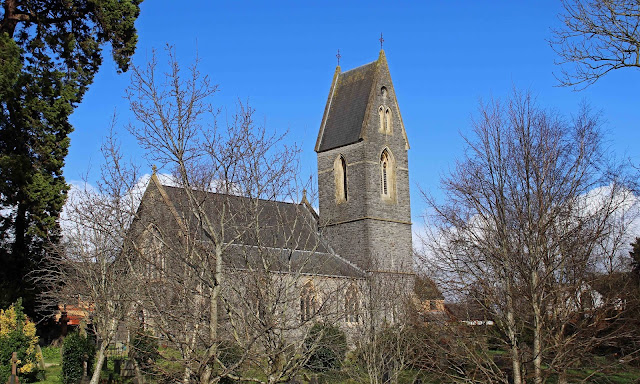 The tower, and its church, St Dochdwy's, are in Llandough, a small hamlet that has been a holy place for a very long time – the clue is in its name: in Welsh, Llan is church and dough is from dochau, as in Saint Dochau/Dochdwy. The St Dochdwy's Church website dates the earliest Christian worship here to the 5th and 6th centuries, and notes that the ‘first permanent church building was erected in the 12th century’.

Amazingly, that first building continued in use until the 19th century when not one, but two new churches were built on the site. The first was built around 1820 but, just 40 years later, was found to be too small for the congregation so was deconstructed, moved and rebuilt, stone by stone, in the nearby village of Leckwith. The present church, with its notable saddle-back bell tower, was consecrated in 1866. David Jones of Penarth was in charge of construction, and its design was executed by Samuel Charles Fripp, an architect from Bristol. 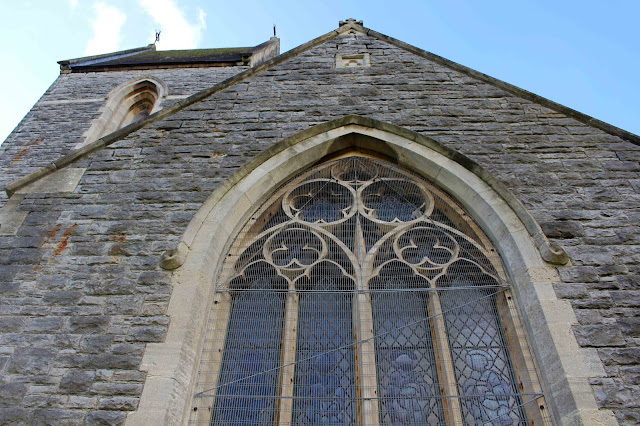 I haven’t been inside St Dochdwy's, as, like so many churches these days, it is locked when not in use, but I did enjoy a good wander around the outside of the building and explored the graveyard that surrounds it. In the entry for the church on the Coflein website (Coflein is the online database for the National Monuments Record of Wales), the exterior of the building is described as having ‘snecked rubble facings with slate roofs and freestone dressings.’ (If you’re not familiar with the term ‘snecked rubble’, as I wasn’t, it means masonry that has a mixture of squared stones of different sizes, as you can see in the photo above.)

As I have a fondness for ornate ironwork door hinges, I was quite taken with the examples on the main entrance door. And, during my circuit of the building, I discovered the narrowest church door I’ve ever seen – I’m not sure what its purpose would have been but it would certainly have encouraged any who needed to use it to stay lean.

To be honest, I found the church building rather underwhelming compared to its impressive tower, but there is one item in the churchyard which is particularly stunning and which warrants a blog post all of its own. That will follow very soon. 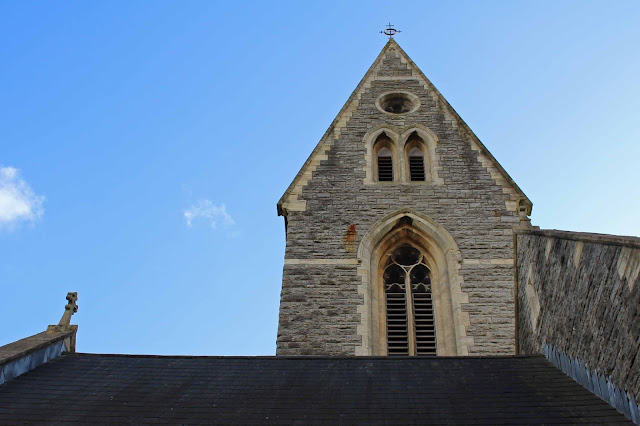 Posted by sconzani at 17:16 No comments: