I haven’t blogged about my knitting projects before but there has to be a first time for everything, right? And I’m celebrating because ... finally ... FINALLY ... F.I.N.A.L.L.Y! ... I’ve finished a project that’s been on the go since January 2015. 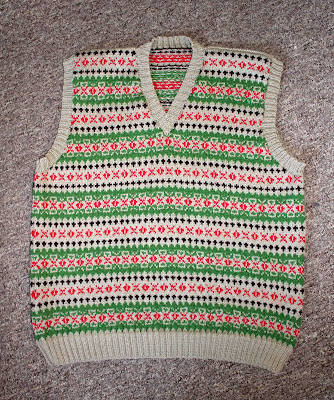 I have actually completed three other projects in the meantime – a bulky jumper with cables, a simple scarf using up the rest of the bulky jumper wool, and another project, a sleeveless vest (which was my own design and one I’m rather proud of) – but this other just seemed to linger somehow.

It’s a jumper / sweater / jersey – whichever you prefer – and it’s one of my own Fair Isle designs (or, more correctly, I should say that it’s my own combination of traditional motifs knitted to my own colour choice).

I started the project during the six months I lived in in 2014-15 and even took the part-finished jumper and all the wool back to in April 2015, thinking I would get it finished during the few months I was back there. It was the winter after all.

But no! I was too busy selling my apartment, selling off my goods and chattels, and arranging to move my life to to knit a single stitch. And then, when I left , I went travelling for a few weeks and didn’t have the space to carry the part-jumper with me, so it had to go into the boxes with all my other belongings, to be seafreighted to .

My worldly goods finally got delivered in mid-October 2015 and I recall enthusiastically extolling the virtues of knitting and including a photo of the part-jumper in a blog I wrote then, entitled ‘Ten things I love about autumn’ – one thing being that the autumn weather meant it was cool enough to knit comfortably. 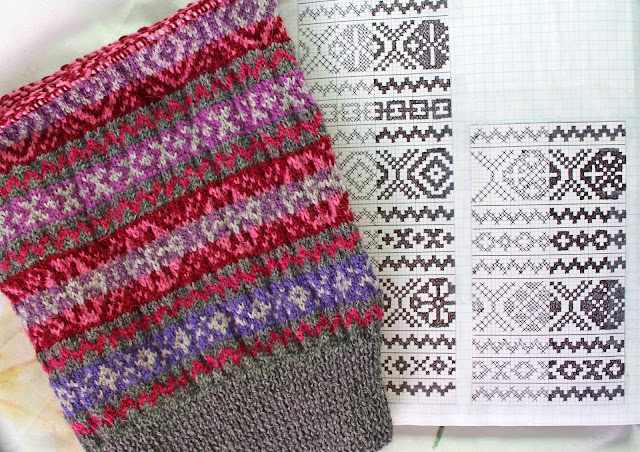 Still, it lingered.... I was busy getting my new life here in under way, walking and exploring a lot. I joined the Glamorgan Fungi Club and the Glamorgan Bird Club and the Ramblers so was out and about with them as well. And, at the beginning of the year, I started a new daily nature blog that took / takes quite a lot of time to produce. And then I started doing voluntary work two full days a week.... 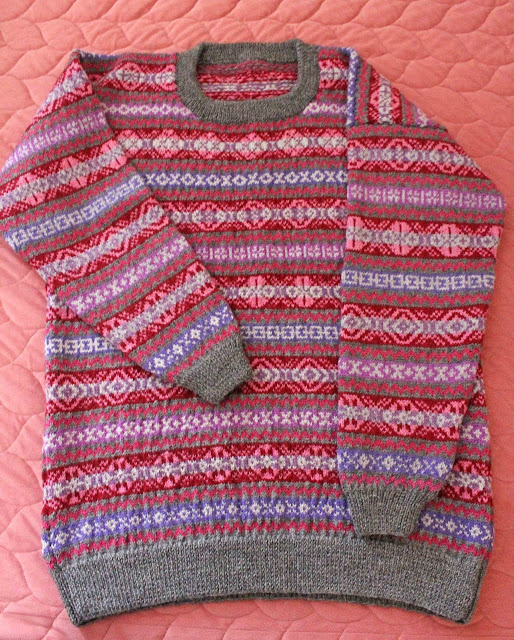 First, I knitted the sleeveless vest mentioned and shown above, and then I finally got back to my lovely Pinky jumper. I told myself I wasn’t allowed to start anything new until it was finished and I set a date of 31 August to get it done. And I did!

So here it is. I absolutely love it and can’t wait for the colder weather so I can wear it.

And, in the meantime, another sleeveless vest is underway. My knitting mojo is well and truly back!

Posted by sconzani at 19:03 No comments:

You know I just can’t resist a well-designed / interesting / lovely / intriguing / memorable / fascinating sign when I see one so, of course, I photographed a few during my recent short break in . Here they are: 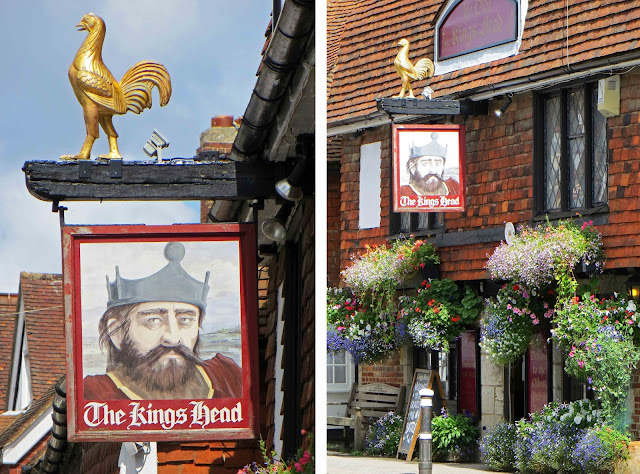 The Kings Head, Battle
The Kings Head is reputed to be the oldest pub in but I don’t know if that’s actually true. The English Heritage website says it’s a Grade II-listed timber-framed building, dating from the 17th century or earlier, though it has at some point been modernised and had a new front attached. When researching this piece, I found a fascinating reference to documents, pertaining to the building, that are held at the East Sussex Record Office.

The will of William Easton of gent., dated 1783, proved PCC 1789, among other property devises a freehold messuage in to John Longley the elder of bricklayer and then to his son John ... In a mortgage of Nov 1810, the property is called Delveday ...

In Nov 1833, Ann Longley conveyed this property to her mother Mary ... who in Oct 1837 sold it to Thomas Wickham of , miller for £650 ... The property passed to his daughter Elizabeth, wife of William Austin of Battle, victualler ... In June 1845, they sold the property, now known as the Kings Head Inn, for £735 to William Miskin of Broad Street, Horselydown, Surrey and others ... [and there is more]

The pub obviously has a long and interesting history. It also does reasonable food, as we discovered when we stopped off here for an early dinner on our way home from . 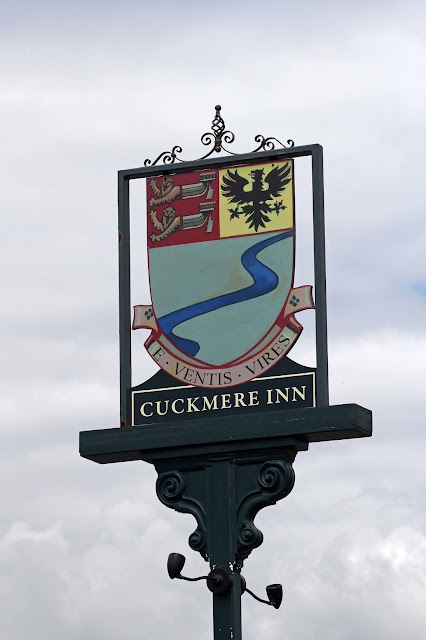 The Cuckmere Inn, Cuckmere Haven
This was our lunch stop on the day we spent at the , and a very pleasant one it was too. Conveniently situated at Exceat, on the road between Seaford and Eastbourne, and overlooking the , the outdoor terraces proved a very pleasant place to eat and sparrow watch – a rather large flock has discovered the joys of human leftovers.

Though I haven’t been able to date the , I imagine it is quite old. It is perfectly sited as a transfer point when the nearby beach at Cuckmere Haven was used by smugglers in the Middle Ages. The top part of the sign includes part of the coat of Arms of the nearby port of Seaford: the ‘lion-hulks’ (half lion half ship) appear in the heraldry of many of the Cinque Ports towns, and the eagle comes from the coat of arms of the d'Aquila family, former landowners in medieval times. The lower part of the sign shows the meandering Cuckmere River, and the motto ‘E ventis vires’ means ‘From the wind, strength’, a reference to the days of sailing ships.

The Cuckmere Inn used to be called the Golden Galleon, an allusion to Drake’s galleon the Golden Hind perhaps or to the Famous Five book? Who knows. I do know lunch was delicious!

Unstable ground
This sign appears at the start of the Seven Sisters cliff-top walk and other similar warning signs have been hammered into the ground all along the cliff tops. Unfortunately, the warnings are frequently ignored by walkers, who range perilously close to the cliff edges, as you can see from my photo. They’re mad! The chalk is crumbly and, with constant encouragement from wind and rain, large slices of cliff fall off on a regular basis. 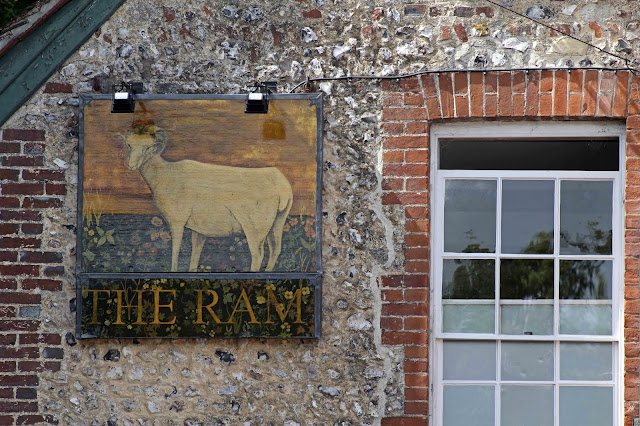 The Ram, Firle
Another day, another scrumptious pub lunch. The Ram is in the tiny historic and is part of the 500-year-old Firle Estate, owned by the Gage family. The inn is a Grade II-listed, brick and flint building that used to be a regular rest stop for the Lewes to Alfriston coach – that’s horse and coach, not motorised bus! The building was also once used as the village court room where the rents for tenant farmers were set and collected. Nowadays, it’s a popular lunch stop and also has boutique accommodation if you fancy a weekend away in a delightful setting. 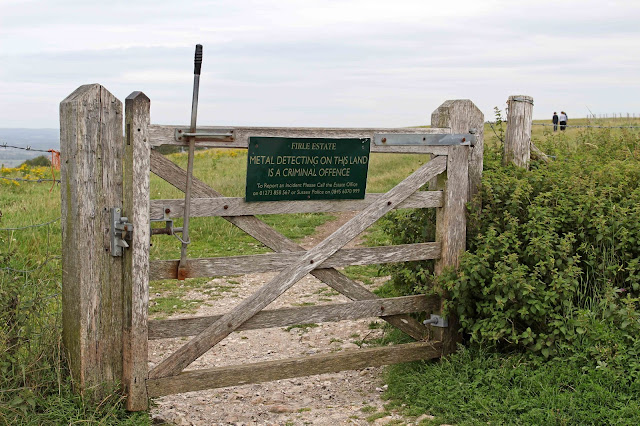