One hundred and seventeen years ago this week, on 25 June 1902, Penarth’s Alexandra Park was officially opened. What was once a steep-sloping field, with tree-filled dingles on each side, became a place to promenade, to admire the views, to sit and enjoy the music from a band performing in the bandstand, to marvel at the birds in the small aviary and the brightly coloured fish in the pond, to breathe in the fresh sea air amidst well-manicured gardens and mature trees.

And it still is some of those things – though I’ve yet to see a band using the bandstand, and most of the views have been obscured, either by growing trees or the modern high-rise apartment blocks that now tower over the streets below the park. 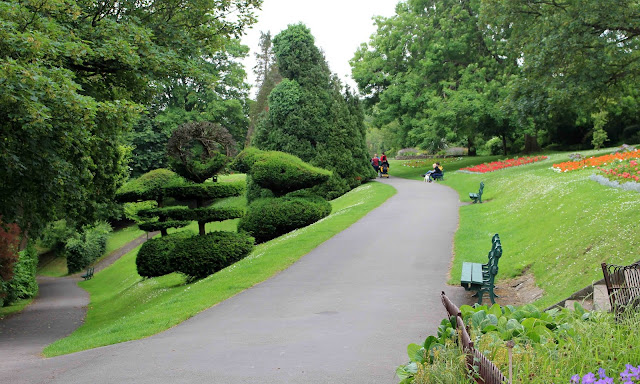 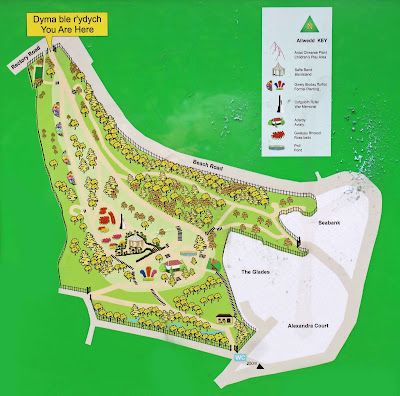 The land for the park was gifted to the town by Lord Windsor, and the local Town Surveyor already had his plan ready for submission to Penarth Council’s Parks Committee by March 1899. Tenders for the construction of the various paths and buildings and the planting of gardens, shrubs and more trees were issued in 1901, and by March 1902 work was well underway, as this article in the Evening Express of 4 March 1902 reports

PUBLIC IMPROVEMENTS AT PENARTH.
A number of public improvements are now in progress at Penarth. A park, six and a half acres in extent, lying between Beach-road and the Dingle, and commanding a view of the Bristol Channel and the English coast, is being made. The natural beauties of the Dingles will be maintained, and the under portions will be laid out with footpaths and shrubberies. A large public shelter to seat upwards of 100 persons will be erected. There will also be an ornamental bandstand and a picturesque lodge for the park-keeper. The Dingle on the north side will be spanned by a rustic footbridge, and numerous seats will be scattered about. 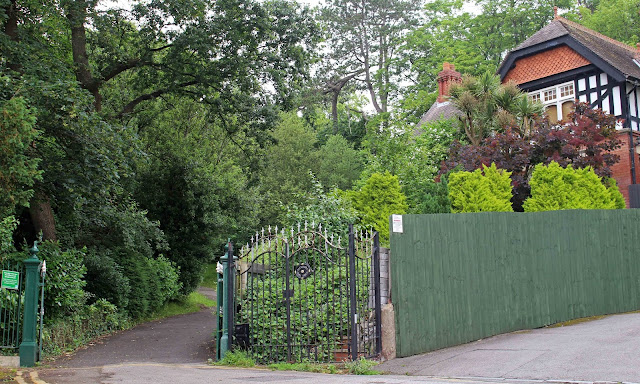 Alexandra Park was named in honour of Queen Alexandra, wife of King Edward VII, and the opening was timed to coincide with their coronation, which was originally scheduled for 26 June 1902 but had to be delayed until August as the King required surgery. There was talk of delaying the park’s opening too but, in the end, the Town Council decided to proceed. Here’s a report from the Barry Dock News, 4 July 1902:

NEW PARK FOR PENARTH.
The Park and Cliff Walk Grounds [a separate area], Penarth, which have been appropriately named Alexandra Park, in honour of her Majesty the Queen, were formally opened on Wednesday week last by Mr Samuel Thomas J.P., the chairman of Penarth Urban District Council. Three years ago Lord Windsor, who is the largest landowner in the district, generously offered various pieces of land, amounting in all to about sixteen acres, to the Council, who decided to lay out the most suitable and picturesque of these sites as a park to be closed at sundown, while the others were to be laid out as recreation grounds, to be left open at all times. The park is a decided acquisition to the town. It is charmingly situated between Beech-road and the Dingle footpath, and overlooks the Bristol Channel, and commands a. splendid and uninterrupted view of the Somersetshire coast. Being well wooded with full-grown trees, with rustic walks, excellently laid-out footpaths, and possessing an ornamental bandstand and numerable seats at convenient spots, the ground forms an ideal place wherein residents and visitors can spend a pleasant afternoon. 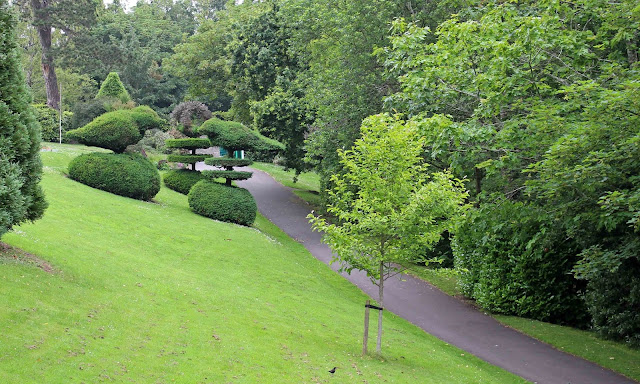 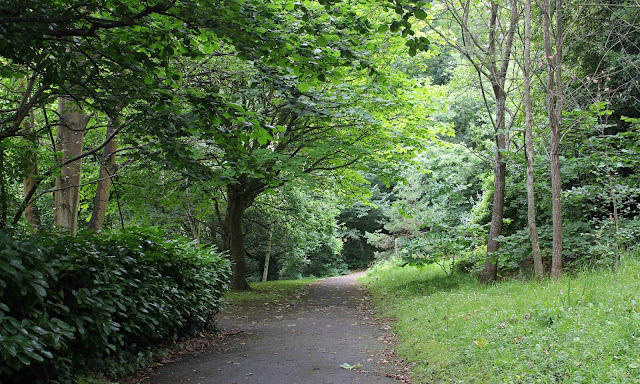 Of course, over time many things have changed in the park – some buildings and the original glasshouses have been demolished, small parts of its grounds have been sold off, a Cenotaph was constructed in 1924, but the park also retains much of its Victorian flavour, with its topiary yew trees and the annual plantings of riotous colour in its garden beds. And the aviary still houses a small population of budgies, canaries and doves, and the pond its goldfish, perhaps the descendants of their original inhabitants. 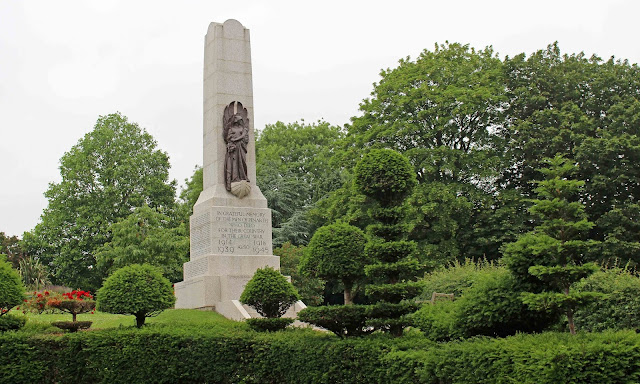 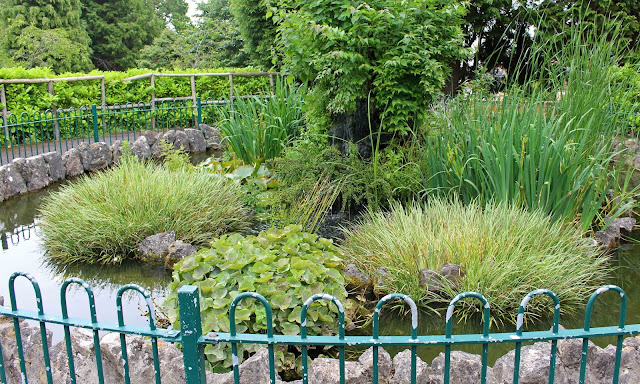 My photos were taken during a walk in the park earlier this week but you can see some wonderful old postcards and photographs of how it looked in its early years, and read more of its history, on the Penarth Parks website.

I must have been up and down this flight of steps a hundred times before, thanks to a local I know through social media, I found out they were called the Dolly Steps. (Thank you, Conrad!) 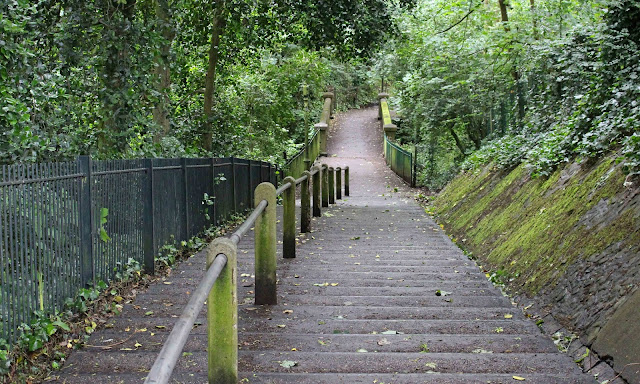 The steps lead down from Plymouth Road in central Penarth into an area known as the Dingle. There, huge old trees tower over a small stream that bubbles out of the hillside before meandering its way alongside Alexandra Park and on down to the sea. 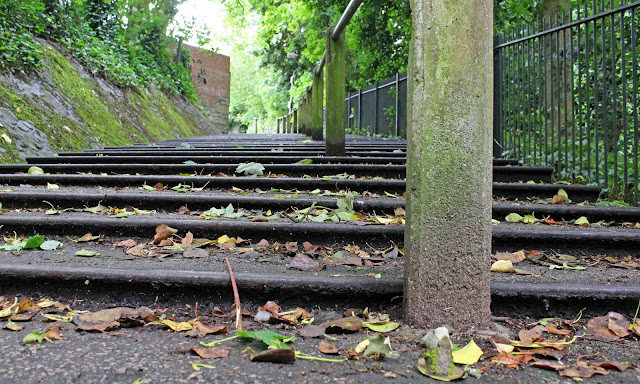 The risers of these steps are incredibly shallow – taking the steps singly feels awkward but their treads are a little too wide to easily negotiate two at a time, unless you’re running. (I do not run!) 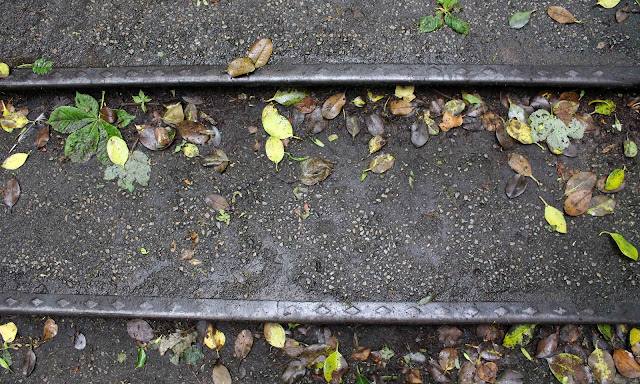 The reason for the design of the steps harks back to when they were created, in the late Victorian era. Women then still wore long, floor-length gowns and modesty prevented them from showing their ankles. The shallow steps allowed them to walk elegantly down to the seaside to take the air whilst still staying within the bounds of propriety. 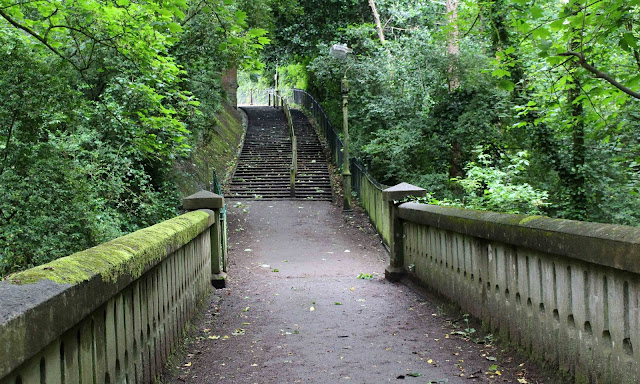 Posted by sconzani at 18:06 No comments:

Brits and their beach huts

Is this a purely British concept? The idea of paying thousands of pounds for what is basically a small shed, which, most of the time, is only used for a few hours on a few days of the year and which, mostly, can’t even be overnighted in?

Apparently not, as huts can now be found in countries like France and Norway, though the idea does seem to have evolved from the bathing huts that prudish Victorians would have wheeled into the sea so they could enter and leave the water in relative privacy.

The brightly striped ‘bathing machine’ outside the Langham Hotel in Eastbourne is a wonderful example, this one lovingly restored by a former owner of the hotel, Julian Martyr.

From those humble beginnings, the hut evolved into a fixed beachside structure and the concept didn’t only become popular in Britain, but also travelled with the Brits to their colonies abroad – particularly noteworthy are the vibrantly coloured ‘bathing boxes’ in the Brighton of the south, in Melbourne, Australia.

According to Wikipedia, there are now around 20,000 beach huts in Britain. In recent years, there has even been a competition, sponsored by insurance company Towergate, to find Britain’s best beach hut of the year – see here and the 2015 finalists here. One particularly luxurious ‘hut’, in a ‘desirable’ location in Dorset, that had a fully-fitted kitchen and the capacity to sleep six people, was for sale in 2018 for £270,000!

The practical purpose of a beach hut is, of course, to have somewhere to change into and out of your bathing costume; to store the buckets and spades, deck chairs and sun umbrella; to make a cup of tea and perhaps prepare your picnic lunch, maybe have a barbeque; and, of course, this being Britain, to shelter from the ubiquitous rain. Personally, I like a bit more privacy than these huts provide, jammed as they are cheek by jowl with a host of other huts, and my ideal beach experience is more about long, empty spaces to walk, but I know people hold treasured memories of spending their summer days at huts like these.

My eye is drawn to the design of the different huts and their wonderful vibrant colours, and the way they sit in the land- or town-scape. They are very photogenic, and I hope to find more to photograph.