One thing I didn’t expect from my visit to was the wonderful artworks on display here and there. I’m not talking about paintings by Monet or sculptures by Henry Moore – these are artworks that relate perfectly to their surroundings and help to tell the story of the castle and its history

The artworks were part of a £260,000 investment four years ago by CADW, the Welsh government’s historic environment service, and were intended to ‘increase public access, enjoyment and participation in ’s heritage’. I didn’t see the castle before these improvements were made, obviously, but I certainly think Caerphilly is one of the better castles I’ve seen, in terms of how it maintains the interest of its visitors, and explains the features and history of this amazing place.

These are four of the special features that caught my eye: 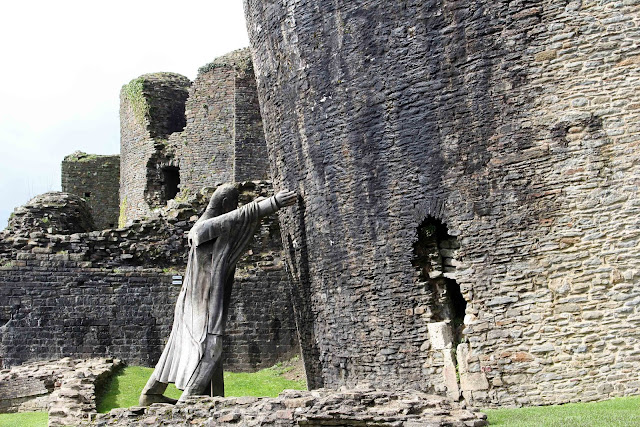 This giant wooden statue is hard to miss as it appears to hold up the castle’s leaning tower – that’s a 10-degree lean, apparently, which is even more than the famous tower. Created by sculptor John Merrill, the 20-foot-tall statue represents the 4th Marquess of Bute. His great-great-grandfather, John Stuart, acquired the ruined castle in 1776; his father John Crichton-Stuart, the 3rd Marquess, had the site surveyed and the great hall reroofed in the 1870s; and then along came the next John Crichton-Stuart, the 4th Marquess, who was responsible for restoring the dilapidated ruins of the castle between 1928 and 1939. Go the Butes! 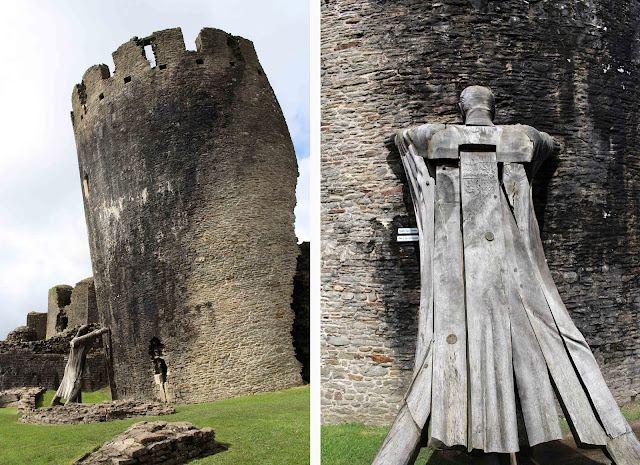 When I was researching the sculptor, John Merrill, I found a fascinating series of photos of his progress on this artwork which you might also enjoy looking at – they're on his website here. 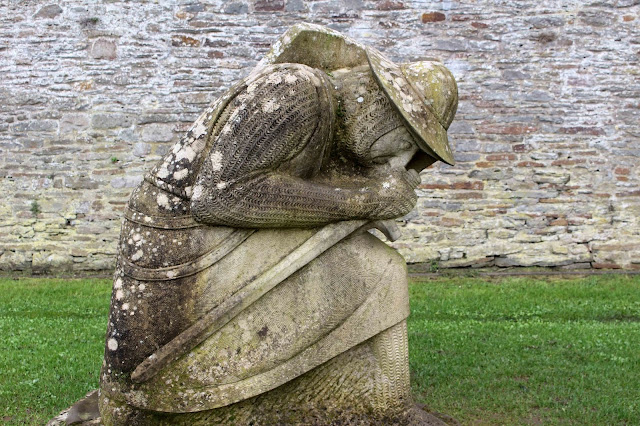 Though you can’t see it in my photo, on top of the castle walls behind this stone-sculpted knight is a covered boardwalk (it’s probably got a technical castle-ish name but I don’t know it) where his enemies are housed, preparing to repel his attack by showering him with arrows and stones and the dreaded burning oil, so he’s hunkering down behind his shield to protect himself from that assault. It’s a cracking sculpture, don’t you think? 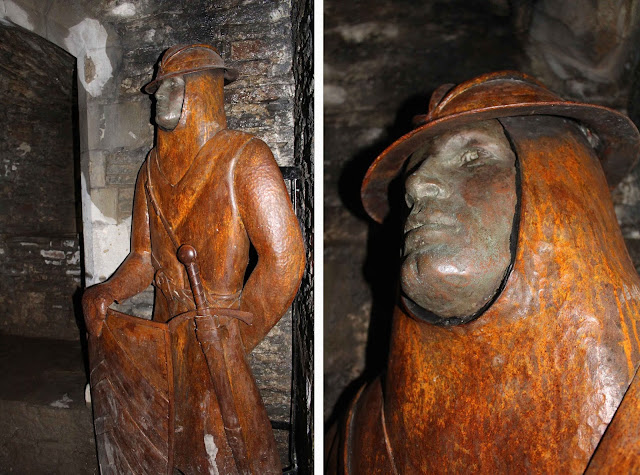 This knight in rusty armour gave me a shock, lurking as he does in a dark corner. I don’t know his story – maybe he’s just one of the many knights who served in the castle guard – but he’s a tall, dark and handsome fellow.

These four pieces were my favourites though, unfortunately, the light was very poor in their little round tower room so I wasn’t able to get good photos, particularly of the backs of their heads (which were also carved). Sculpted in 2013 by Rubin Eynon, the piece is entitled ‘Four Heads’ and, as a signboard indicated, they are ‘the villain, the king, his wife and her lover: A tale of power, greed, lust and violent death at the top of the medieval world’.

This dramatic piece of medieval history goes something like this:
The king was Edward II (1284-1327), a tyrant whose vicious rule and battles with his barons turned his kingdom against him. The villain was Hugh le Despenser (1286-1326), Lord of Glamorgan and owner of . Hugh was a close friend of Edward’s, and aided and abetted the king’s tyranny. In 1325 Edward’s queen, Isabella (1295-1358) went to , in theory to negotiate peaceful relations between her husband and her brother, the French king Charles IV but, in fact, she had other plans. 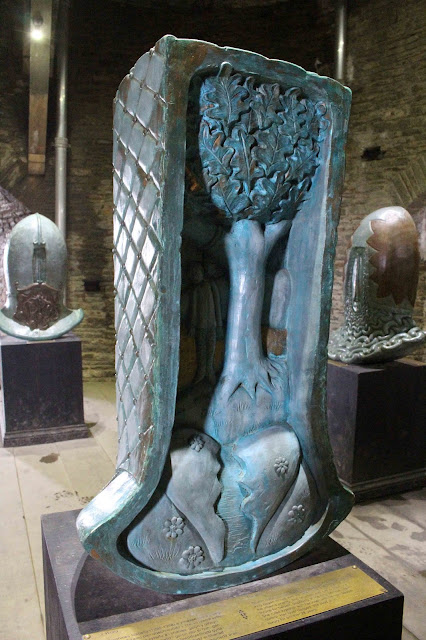 In France Isabella met up with Roger Mortimer (1287-1330), who had led a revolt against Edward II in 1322 and was the sworn enemy of Hugh le Despenser. Roger became Isabella’s lover and, together, they returned to with an army and wrested control of from the king. Both the king and the villain tried to escape Isabella’s clutches by fleeing to but were soon caught.

Edward was forced to relinquish his crown to his 14-year-old son, Edward III, and died a few months later, probably murdered on Isabella’s orders. The villain Despenser met a rather more gruesome end: he was hung, drawn and quartered in on 24 November 1326.

But wait, there’s more. Initially, Isabella, with Roger Mortimer a very active co-ruler, ruled as regent for Isabella’s young son but, in 1330, Edward III took back his authority, and Roger the lover, accused of over-stepping his authority and assuming royal power, was also hanged. Isabella was allowed to live on, in style but without the power she had once enjoyed, until she died a natural death in 1358.


Here endeth this lesson in English and Welsh history, and the tale of the villain, the king, his wife and her lover, and a brief look at some of the extras has to offer. But there’s lots more to see and explore so, if you ever get the chance, do go and visit this magnificent place.
Posted by sconzani at 10:00