And now for something completely different – just to prove I didn’t spend all my time in the mooching around historic stately homes, a visit to the world-famous-in-transportation-circles Anderton Boat Lift! 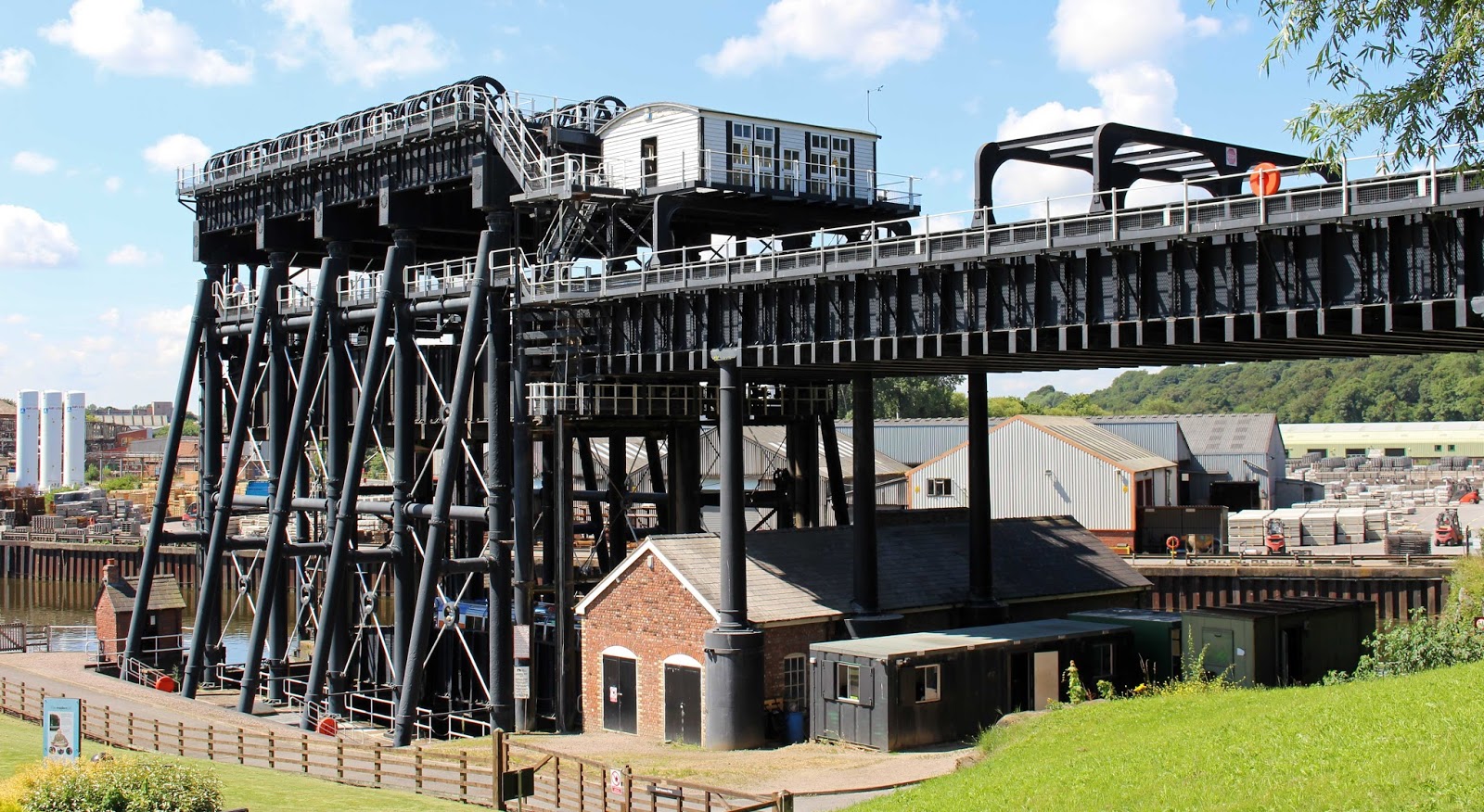 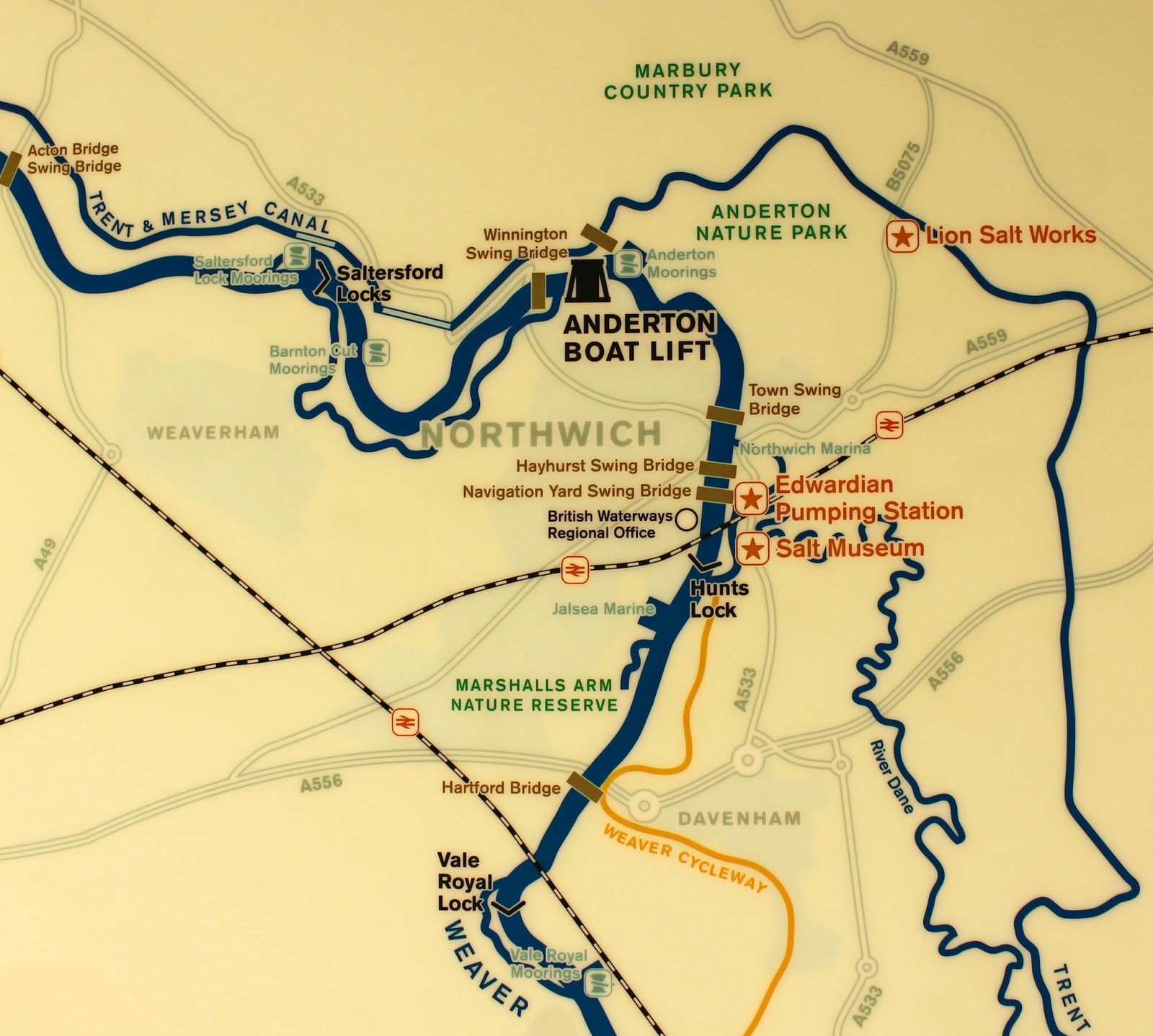 A bit of background history first though …

Salt, clay and coal were the natural resources that ignited the Industrial Revolution in the north-west of . Around the Anderton area (it’s very close to Northwich), the production of salt from wild brine and later from rock salt became the major industry, with more than 85,000 tons of salt being transported on the River Weaver in 1777 alone.

As well as using rivers to transport goods, canals were also built. In 1772, the Trent and Mersey Canal was completed, as part of engineer James Brindley’s grand scheme to link the rivers Mersey, Humber, Thames and Severn to create a series of major transportation links across England, the motorways of the time.

The problem at Anderton was how to solve the issues resulting from the 50-foot difference in the levels between the River Weaver and the and . Manually transferring cargo from the river to the canal, using cranes, planes and chutes, was the initial solution but it was time consuming, labour intensive and expensive, and there simply wasn’t enough room for a series of locks to move the boats themselves to the other level. 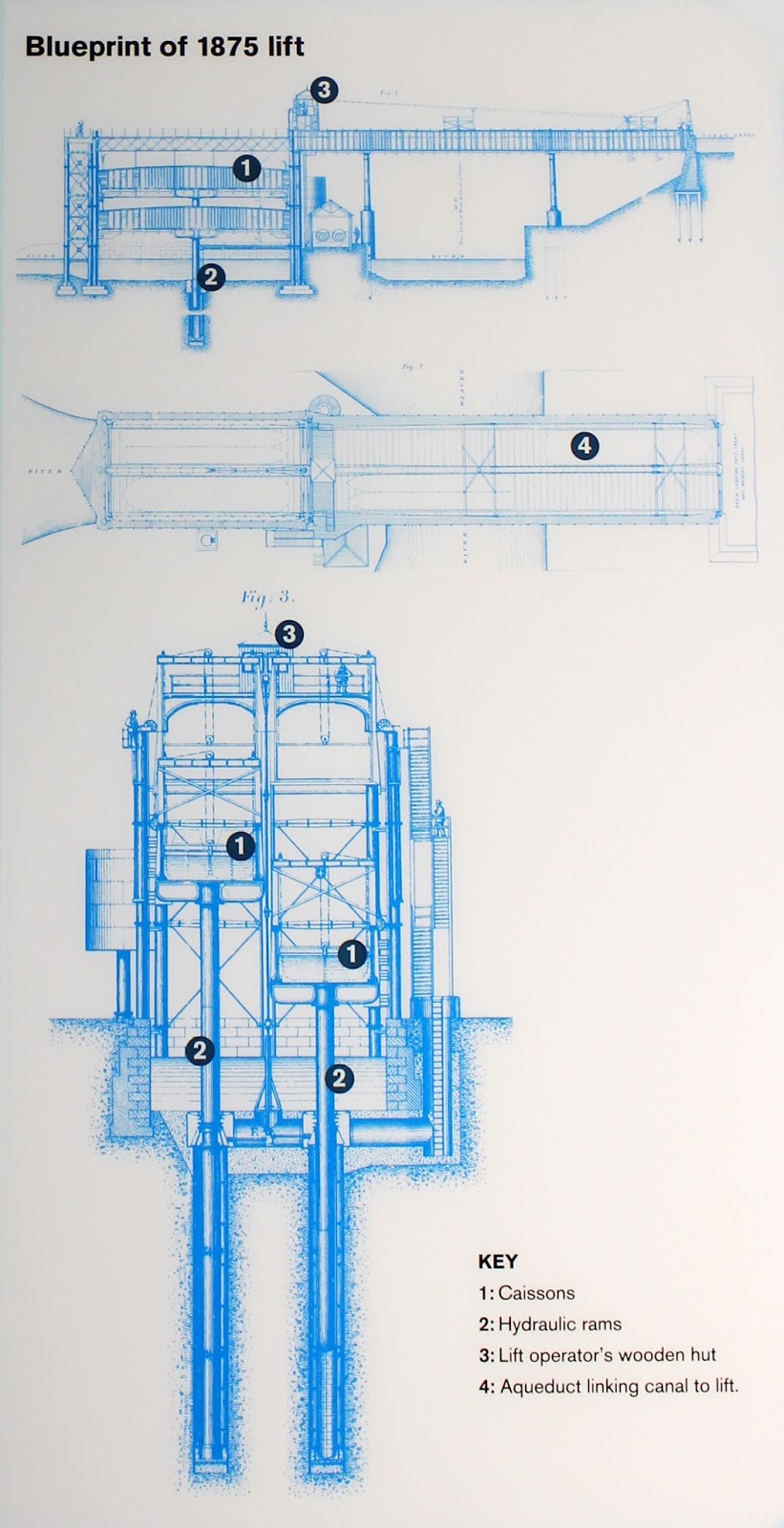 So, in 1870, the Weaver Navigation Trust members resolved to build a lift that would carry a whole boat (complete with heavy cargo of salt, or whatever) between the two waterways, and the Anderton Boat Lift was formally opened on 26 July 1875. The concept was simple really – sail the boats into a water-filled box, close the box gates, one box goes down, the other box goes up. Apparently, it was Archimedes who discovered that water displaced any weight placed upon it so regardless of the boat or its cargo, the caissons always weigh 252 tons – if I had once learnt that at school, I had since forgotten it.

As I’m obviously no engineer, I’ll let the signboard provide a more detailed explanation of the process:

'How it worked 1875. The hydraulic lift was designed to lift boats and their cargoes sitting in a container of water known as a caisson. The two equal caissons would counter-balance each other like a set of scales. Then by draining a little water from the lower caisson, nearly all of the work pushing this caisson up would be done by the heavier one going down, gently lowering it on a hydraulic ram. The upward caisson would stop just short of the required position and a steam engine provided the power to push it to the top.'

Though the system worked impeccably for the first five years, problems then began to plague the lift. There were ongoing issues with the hydraulic cylinders, partly due to the salty water of the River Weaver corroding the lift’s metal which in turn stopped the hydraulic rams from working smoothly. So, in 1908, the operating system was updated to be powered by a series of electrical motors and to allow the caissons to be operated independently of each other.


The new system operated successfully for 75 years until, during routine maintenance in 1983, extensive corrosion was discovered in the superstructure. The lift was declared unsafe and shut down, until March 2002, when, after an extensive and extremely expensive restoration programme, the lift was re-opened to traffic. It has been restored to its original hydraulic operating system, and the site now includes a visitor centre (with shop, café and informative exhibits). 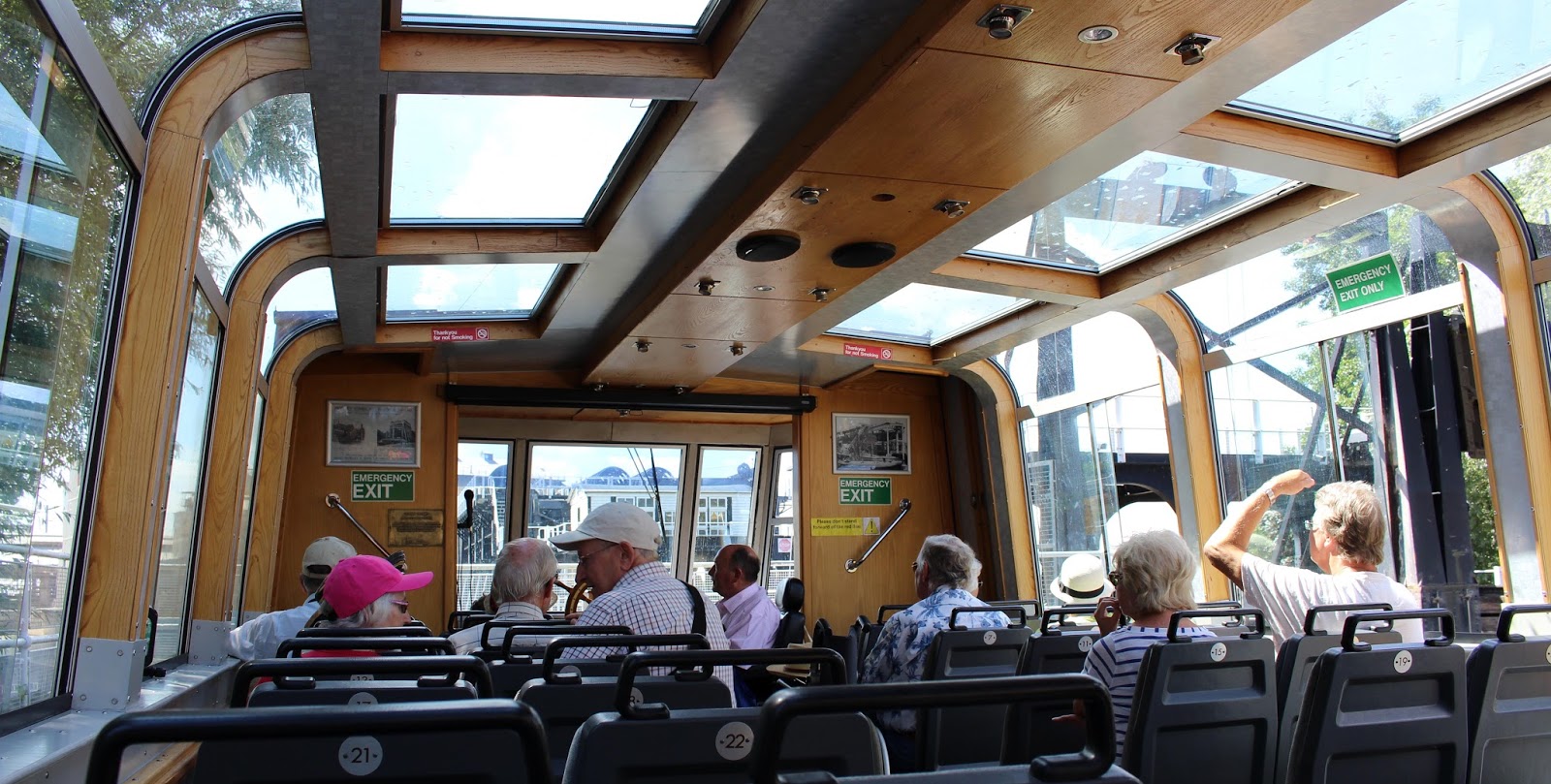 To experience this miracle of Victorian engineering firsthand, we took a trip down the lift sitting in the 56-seater canal boat the ‘Edwin Clark’, with a bus load of oldies on an outing from a local town. To be honest, the boat lift, though fascinating, was a bit of a non-event. There was a live commentary from a volunteer guide as we were transported into the heart of the massive iron superstructure, then a very quick descent before we emerged into the river basin with the three-storey lift structure towering over us. 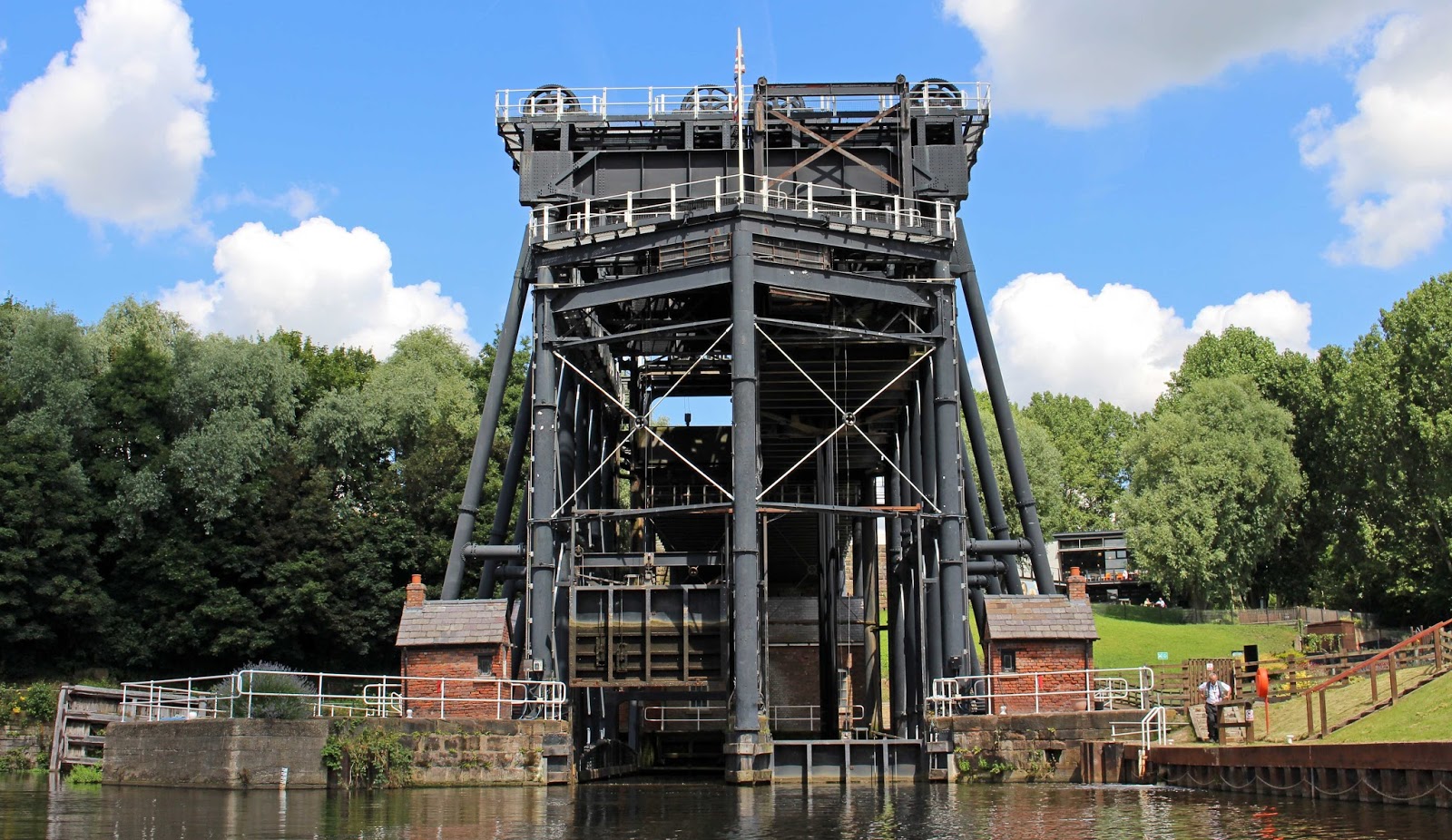 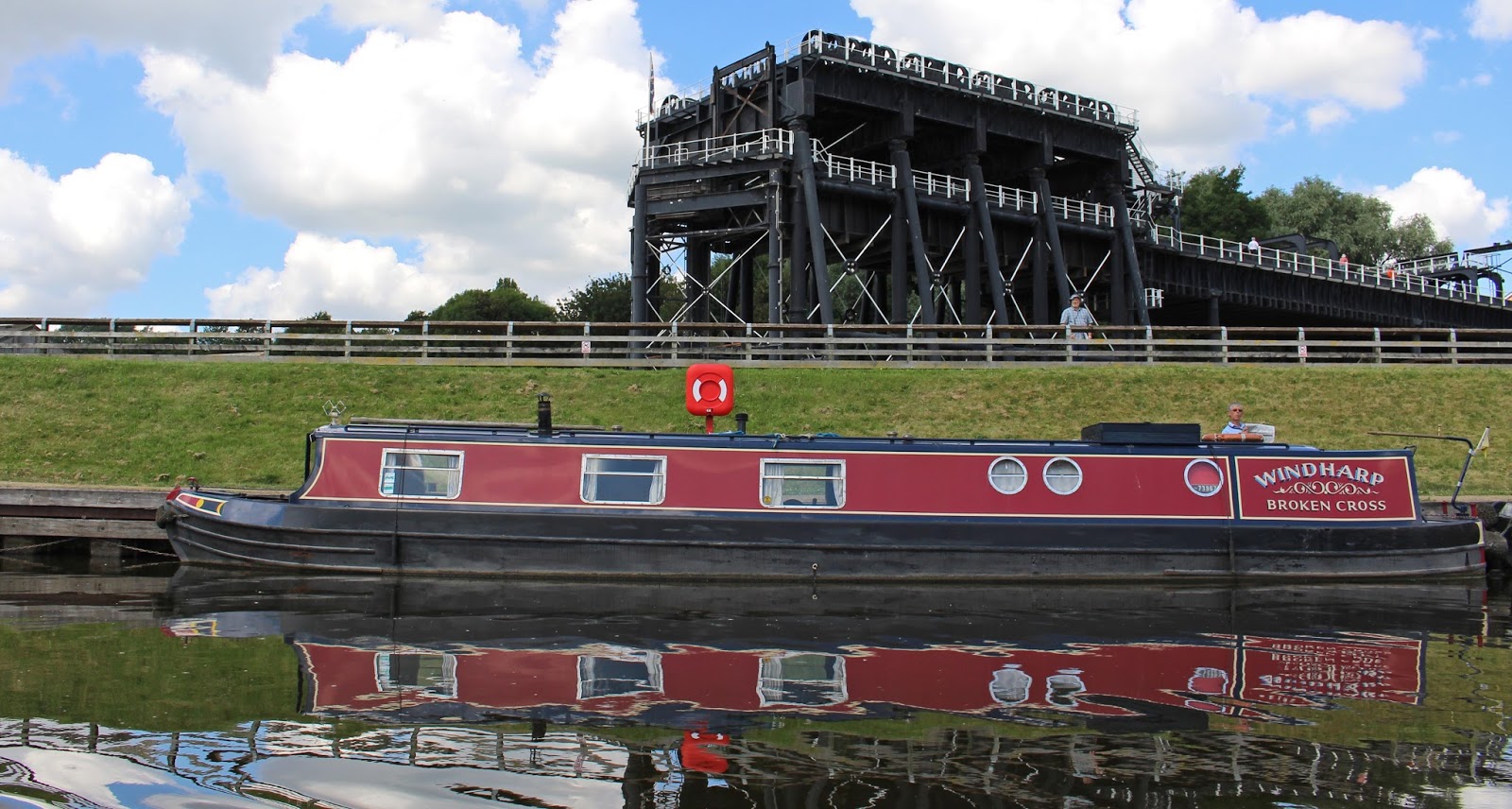 We then extended our cruise to continue down the River Weaver as far as the in Northwich and back, a 45-minute trip. This was a lovely voyage, with pretty scenery, the odd heron and swan sunning themselves or fishing on the river bank, gorgeous blue-sky-and-fluffy-white-cloud reflections on the water, and more interesting snippets of information about the local area from a boat captain who fancied himself as a bit of a comedian!

Later, after a spot of lunch at the café, we headed along the Trent and Mersey Canal towpath aways, accompanied by ducklings and cygnets, passing parked narrow boats and with others sailing by, to a marina where people live in their boats – I have a romantic notion that this would be a fun lifestyle though perhaps not in a marina with neighbours so close. 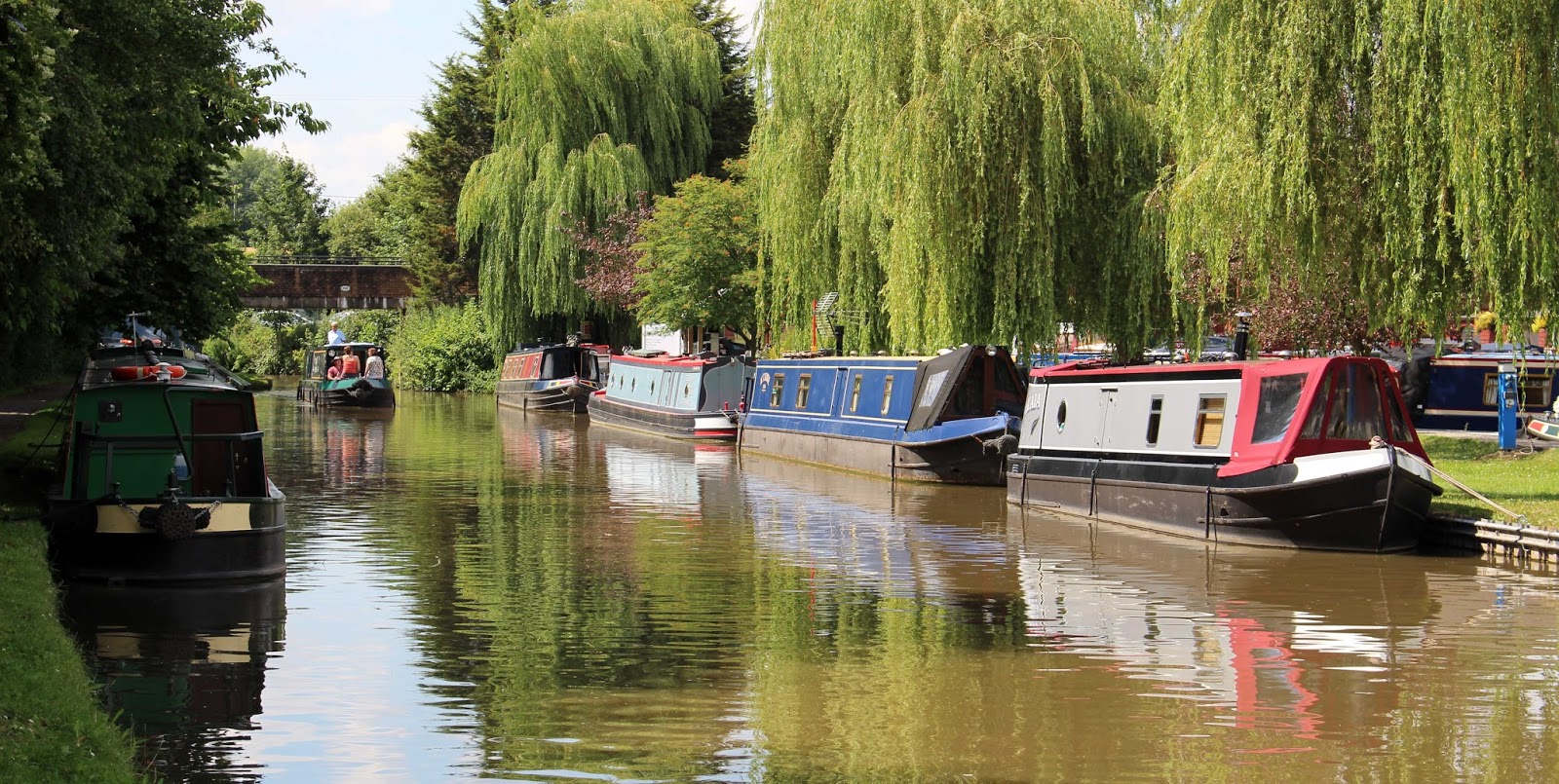 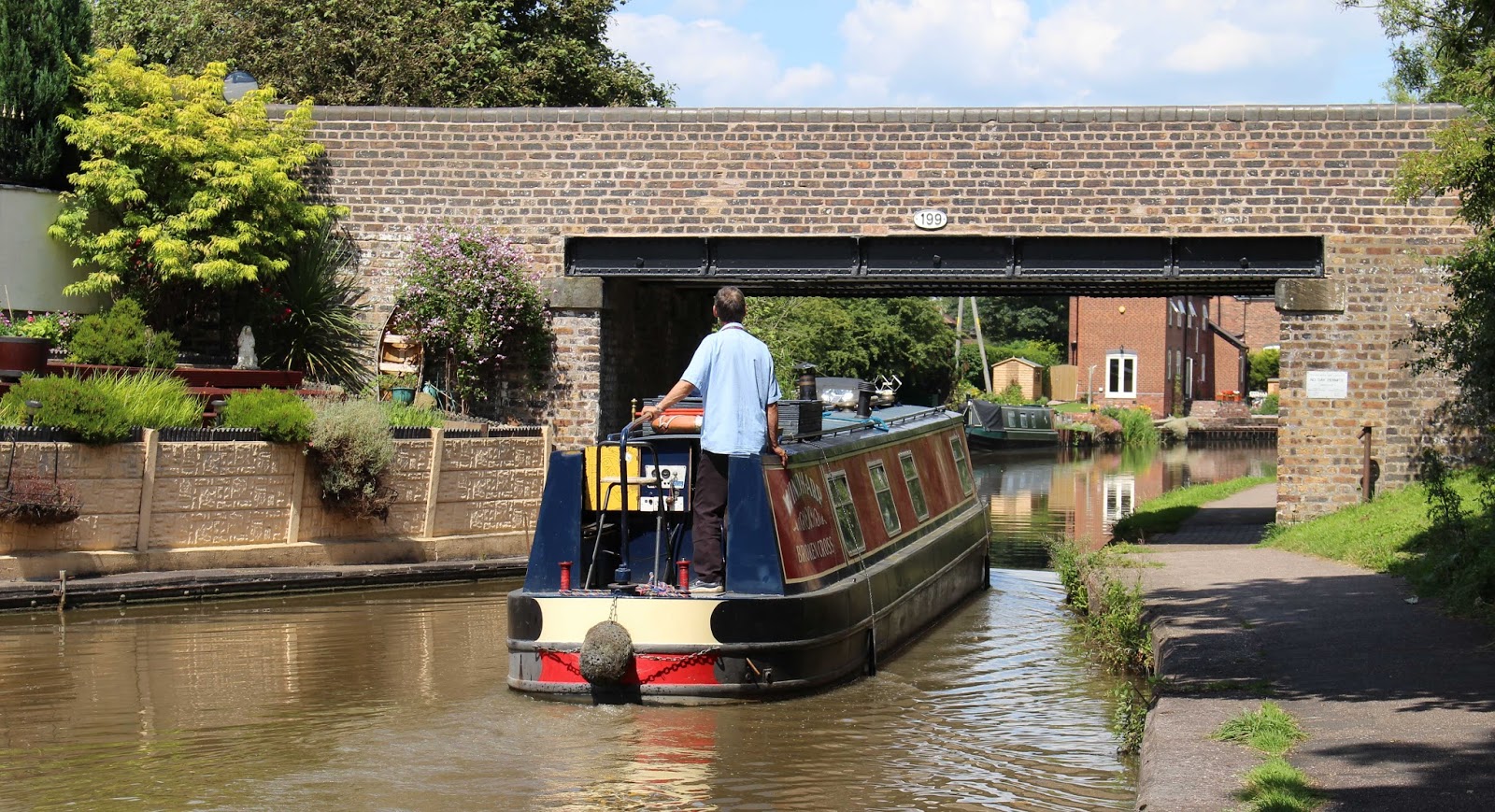 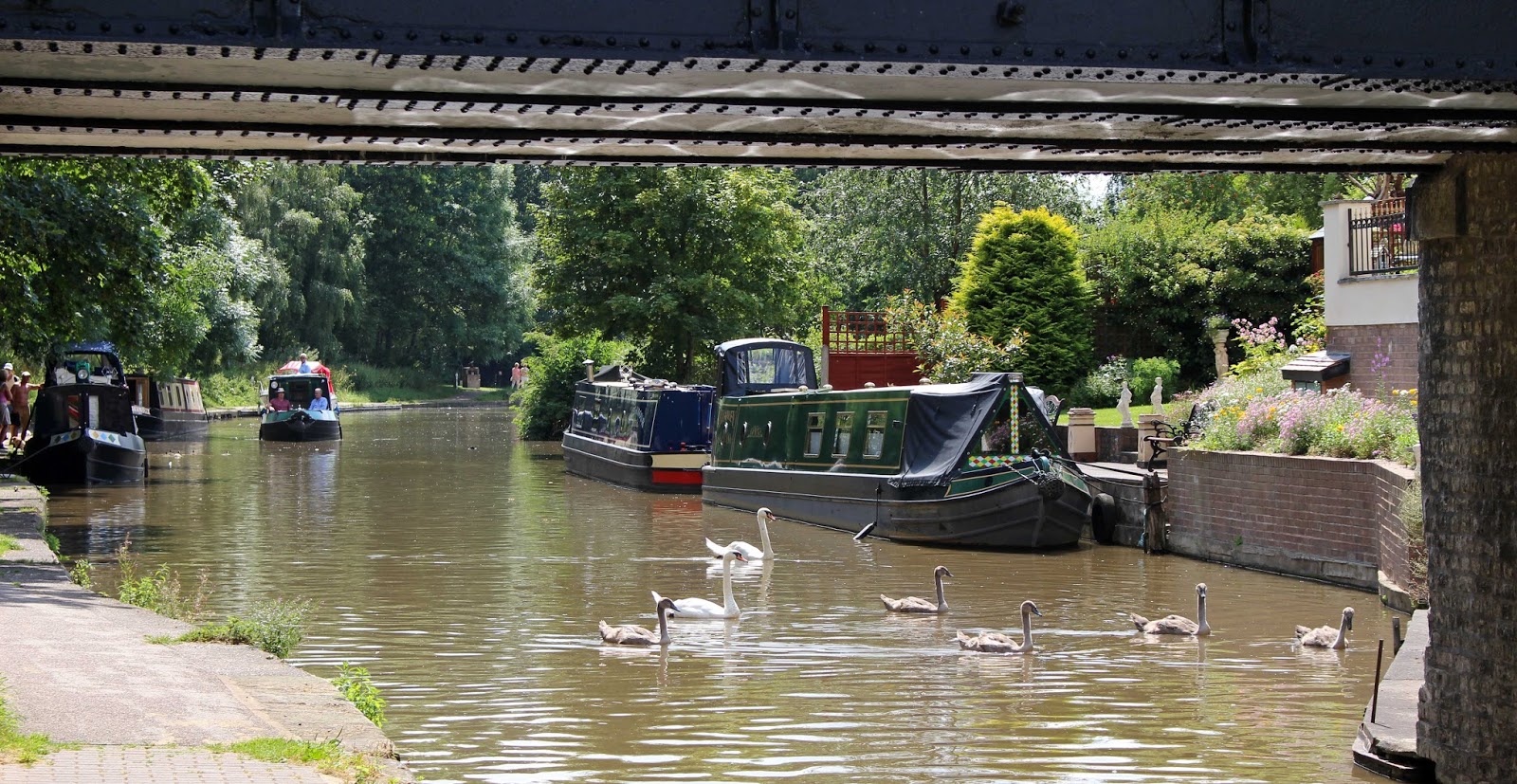 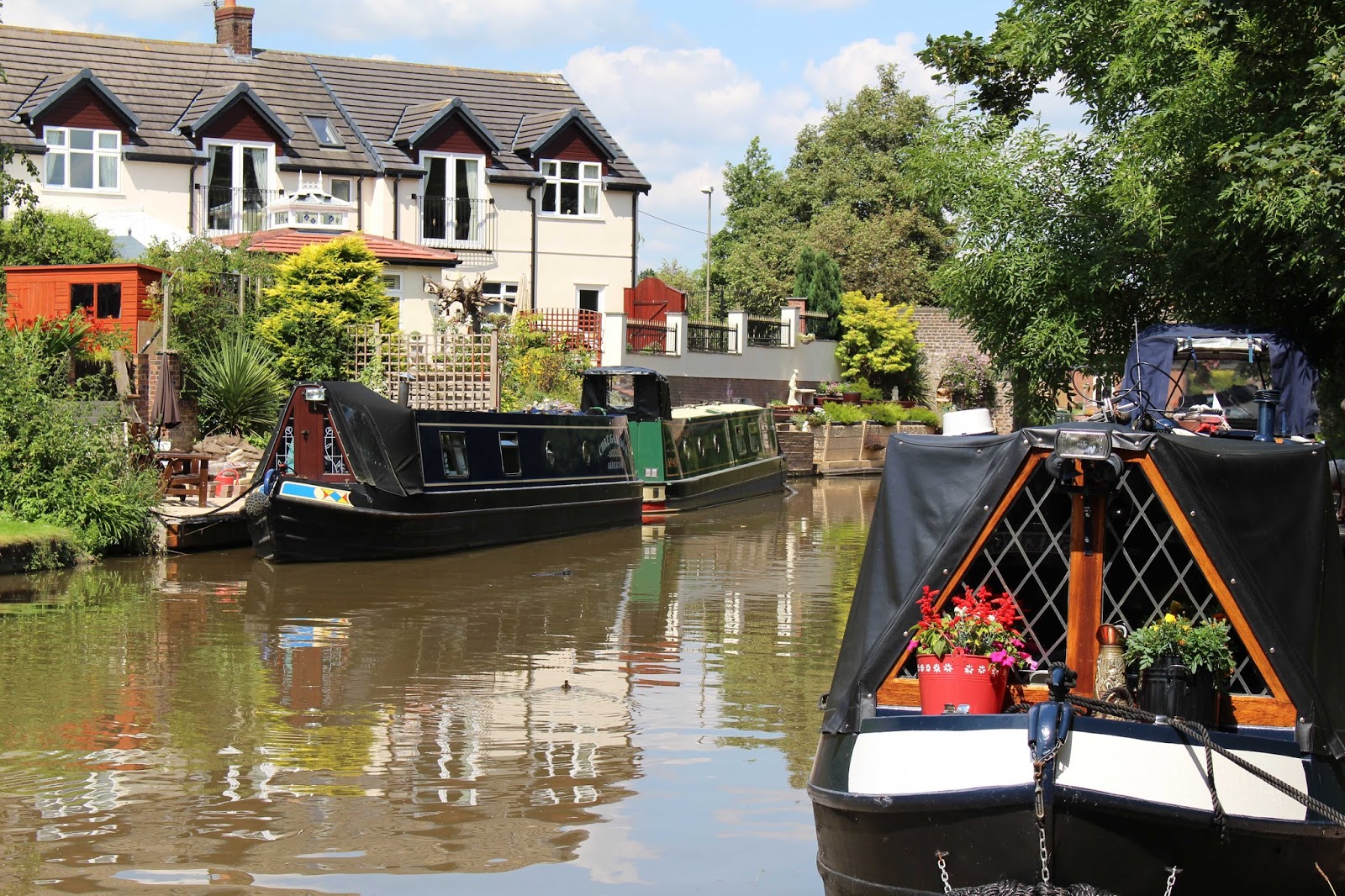