One of the lanes I regularly walk follows an ancient footpath used by local parishioners to commute between two historic places of worship, the mother church of St Mary and All Saints in Great Budworth and one of her parochial chapelries, St Oswald’s Church in Lower Peover, a walk of about six miles.

According to local historian Mike Morton,

In Saxon times … the huge but thinly populated parish of Great Budworth … stretched all the way to and Allostock. It is likely that burial of the dead took place in at an early date, but baptisms and marriages were for a long time conducted only at Great Budworth. The natural way from Peover to the parish church would be following the course of the Peover Eye [a stream], itself probably a highway in heavily forested Celtic times. … The church at dates from the 13th century and the font for baptism dates from 1322, but it was not until about 1570 that St Oswald’s was licensed for marriages. Up until then, wedding parties would have to walk (or the wealthier ones ride on horseback) along this path.

St Mary and All Saints Church, Great Budworth
This imposing building is one of the largest parish churches in the Diocese of Chester and the mother church of the rural Deanery of Great Budworth. There has been a religious presence on this site since at least the late eleventh century, as a priest is mentioned in the Domesday Survey, but the building we see today dates from the fourteenth, fifteenth and early sixteenth centuries, when the church was considerably enlarged.

Once the property of the Augustinian Canons of Norton Priory, the church was taken over by Puritan ministers preaching radical Protestantism during the sixteenth-century Reformation and then changed again, to Anglicanism, during the seventeenth century.

One of the things that fascinates me about this, and many other old churches, is the proliferation of heads adorning the walls, both inside and outside the building. As you can see from the photos, some are realistic (perhaps the personifications of biblical figures used to educate the illiterate), others fantastical (like the grimaces of sinners sentenced to an eternity of hellfire and damnation, intended as a warning to the parishioners). Amongst the many treasures contained in St Mary’s, there is also the rather worn and much-graffitied alabaster effigy of the Sir John Warburton who died in 1575, one of the Warburtons of Arley Hall who owned much of Great Budworth from 1469 right through to the 1940s. 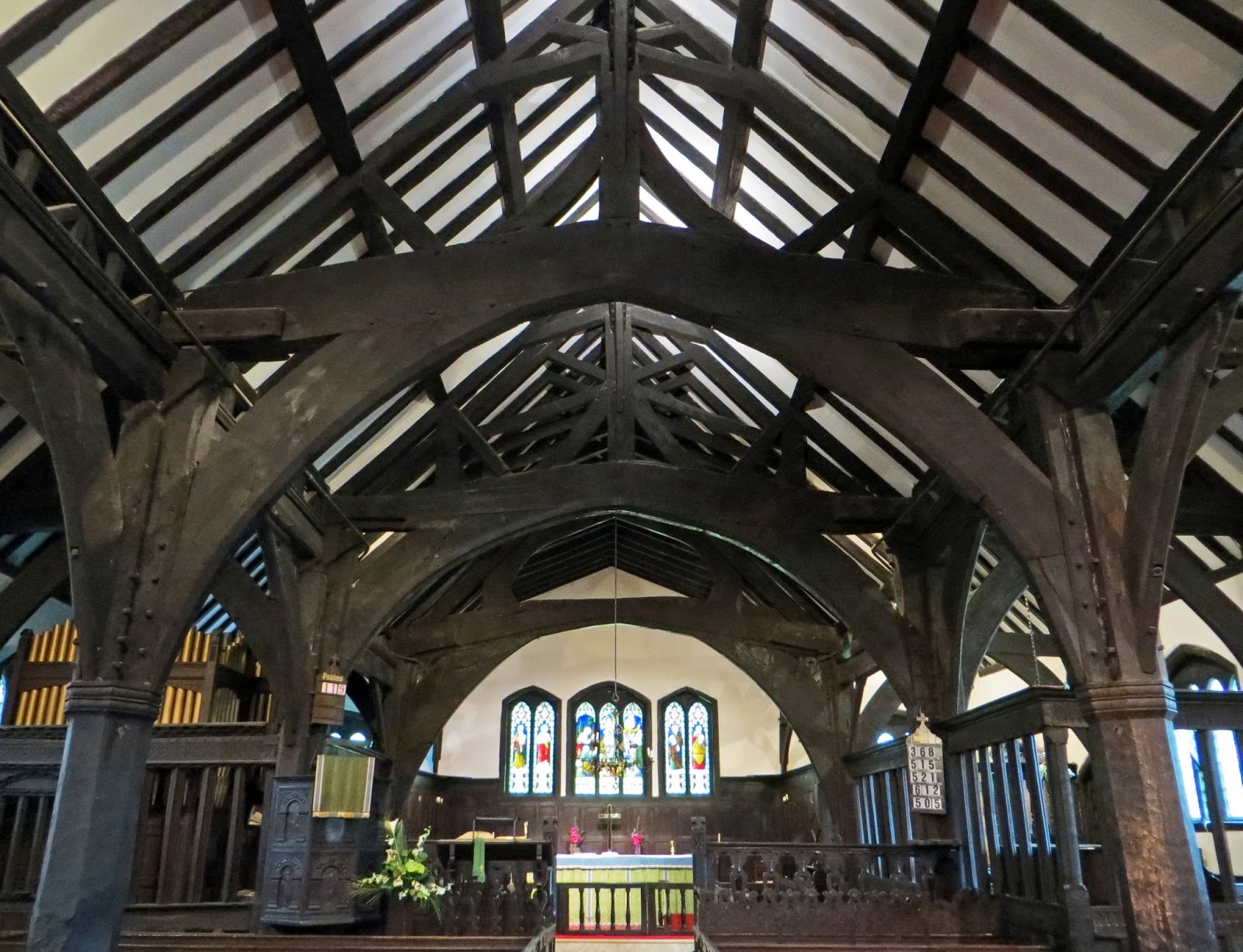 St Oswald’s Church, Lower Peover
Though the half-timbered part of the building and the sandstone tower were built in the 1500s, there has been a church on this site in (pronounced Peever) since at least 1269 when Richard Grosvenor of Hulme Hall built a Chapel of Ease here. Though the aisles were altered and reroofed in the 1850s, the building is still an outstanding example of a medieval oak-framed church, and it also contains sixteenth-century furnishings and all manner of old relics, statues and plaques. 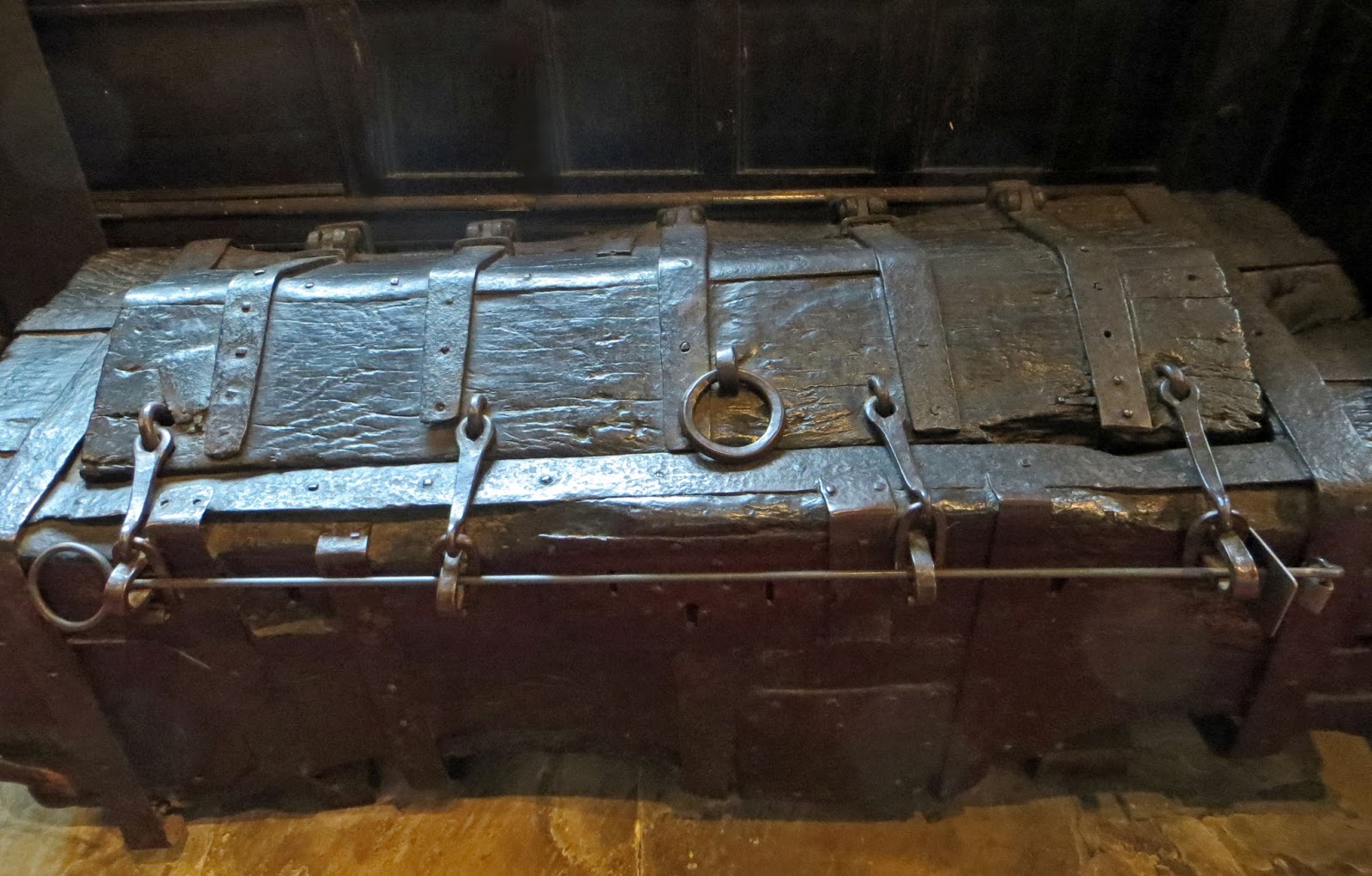 One item that particularly caught my eye was a huge old wooden chest, measuring 6 feet long by 2 feet wide, lying on the floor in the south aisle. Above the chest was a sign:

The ancient dug-out chest was brought here from Norton Priory in 1269 for the safe keeping of vestments, plate and books. It is just the trunk of some mighty oak, roughly hewn out, and bound with wrought-iron bands. The four padlocks are of later date, and testify of the days of the four churchwardens, each of whom had a key, so that the ‘safe’ could not be opened unless all four were present. … Legend has it that any maiden who aspired to dignity of a farmer’s wife should first prove her worthiness by throwing back the lid with one hand.

Looking at the chest, the maidens must have been extremely strong in days gone by as that lid must weigh a ton! The church website explains, ‘It is believed that this tale originated because it was said that a farmer’s wife in those days needed to be strong enough to be able to lift the famous Cheshire cheeses made in the area.’

Just as the chest is a silent witness to the history of this holy place, so are the headstones in the surrounding graveyard, a well kept and peaceful haven that was also interesting to explore. The antiquity of some of the gravestones fascinated me and led me to wonder about the stories of the people buried there. What a wonderfully tranquil place to spend eternity!