Cheshire treats: the gardens at Arley

Exploring the footpaths and lanes around Arley has been one of my regular walking circuits this year – it’s about 14 kilometres from where I’m living so a good workout for my legs! – but yesterday was the first time I’d ventured inside the gates.

Arley Hall is home to the Viscount and Viscountess Ashbrook, and his family, the Egerton-Warburtons, have lived there for over 500 years. Each generation has made its mark on the land, and Arley’s magnificent gardens are the product of 250 years of imagination, experimentation and creativity by successive family members.

In 2015 the gardens have been opened to the public from March onwards, earlier than is usual and perhaps a little too early this year, as very few of the spring bulbs and blossoms were in flower on this early March day. Still, this is a garden with lovely bones – magnificent trees, a walled garden, elegant topiary, a series of well-defined garden rooms that leads you through from one wonderful vista to the next – and it is much easier to admire and enjoy these structural features without the eye constantly being diverted by the prettiness of colourful flowers. This is truly a garden to be enjoyed in all seasons. Take a walk with me … 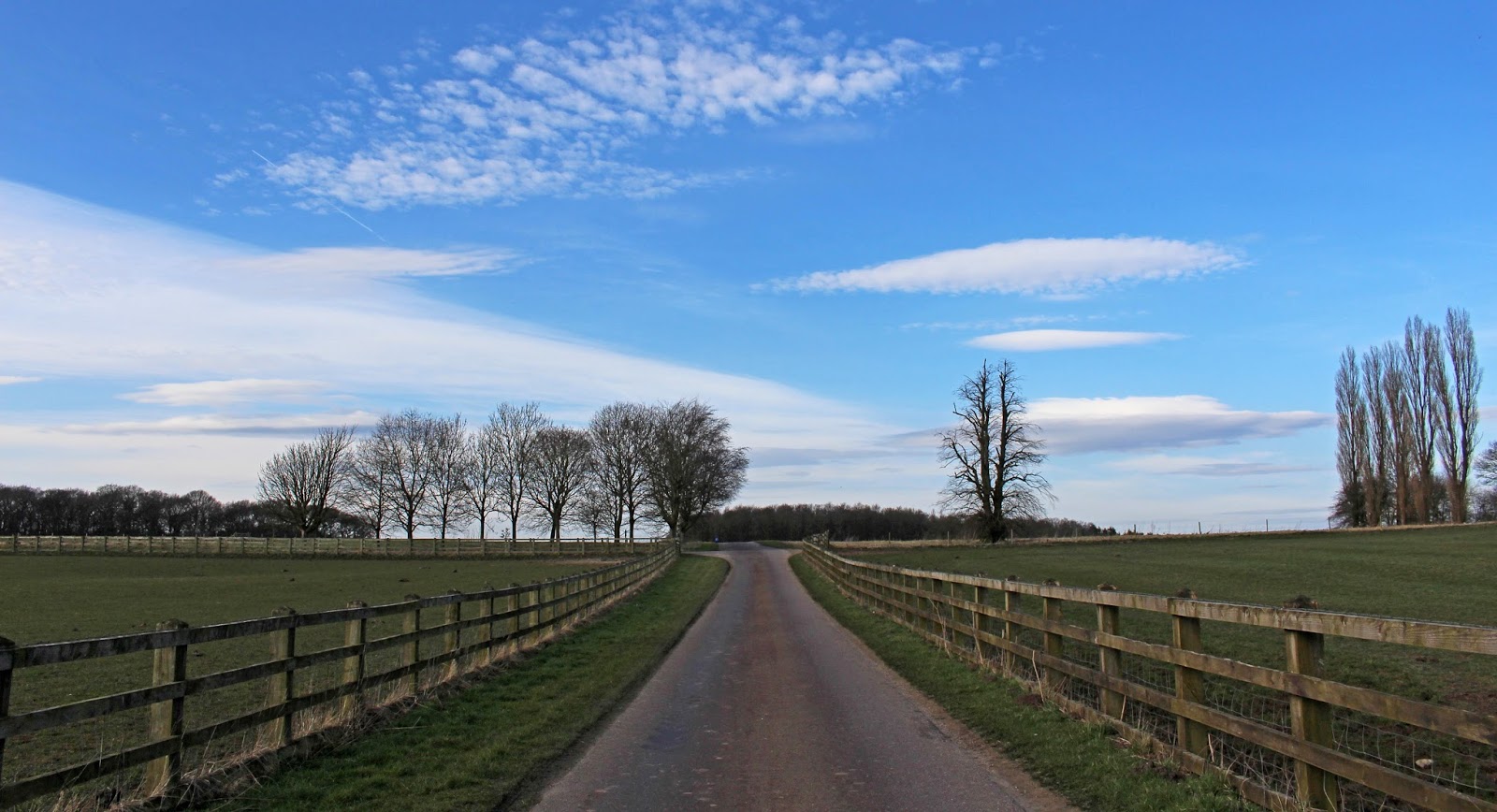 The entry road is a statement in itself, flanked initially by woodland, then opening out on to large horse-studded paddocks. 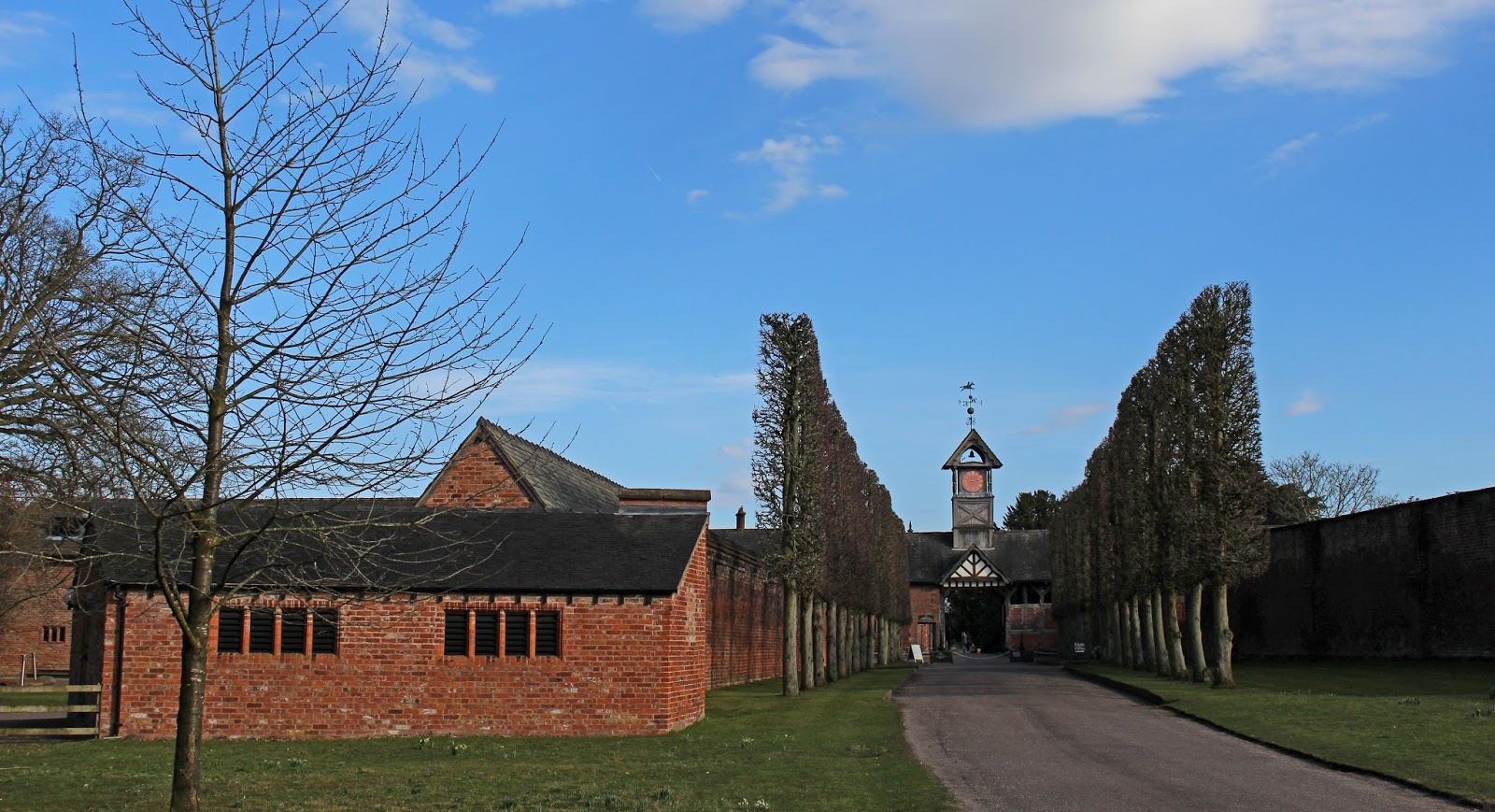 The entrance is enticing – look at those trees, the rich warm bricks, the mid-19th-century archway through the old barn, the mid-18th-century clock and that weathervane. I’m hooked already! 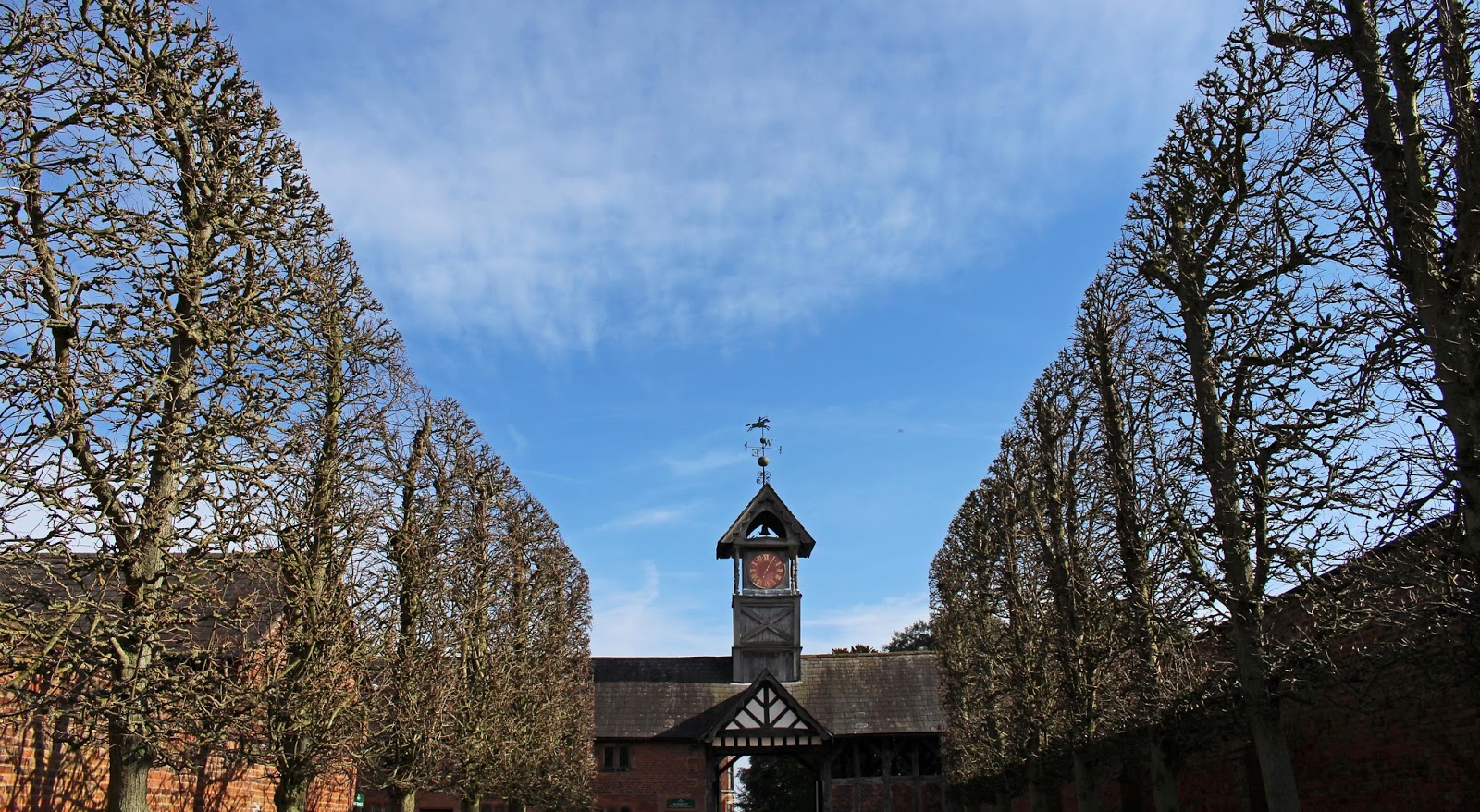 Having recently blogged about lime avenues, I was amazed by this most unusual pleached-lime example, planted in 1856. Apparently, the limes are clipped annually to maintain their juvenile state, so they never produce flowers or fruit or grow to the size of mature lime trees. 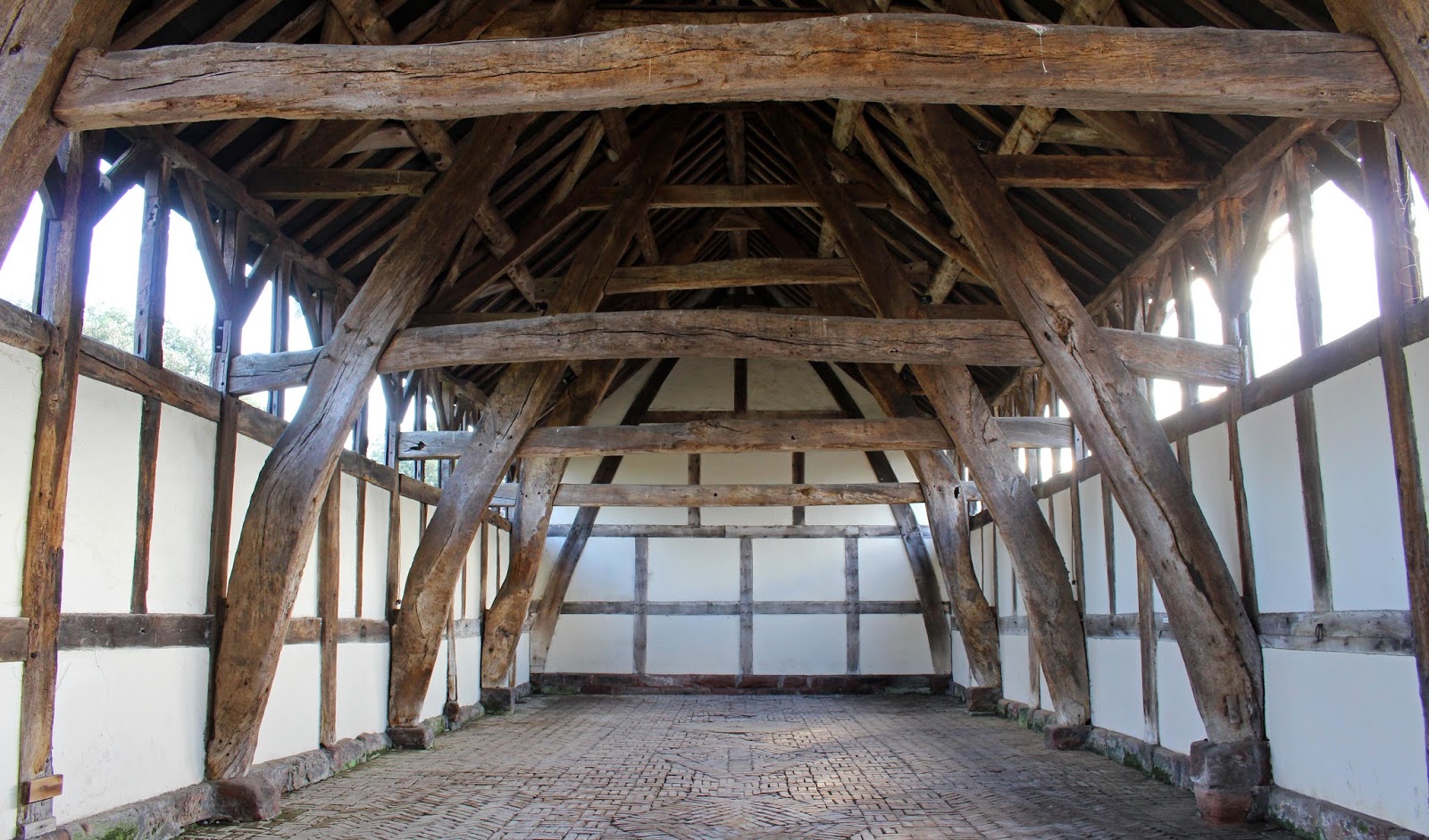 The Grade I-listed Cruck Barn (‘cruck’ is the name of those huge oak beams running down each side) dates from around 1470 and was originally used to store corn sheaves prior to threshing. The herringbone brick floor is not original, having been laid in 1976 to a design by Elizabeth, Viscountess Ashbrook.

My exploration of the gardens began in The Grove, an informal garden in a woodland setting, studded with lovely pieces of sculpture, many not-yet-flowering shrubs, an exotic arboretum, and a large assortment of rhododenrons and azaleas. I did find some flowers to appreciate. 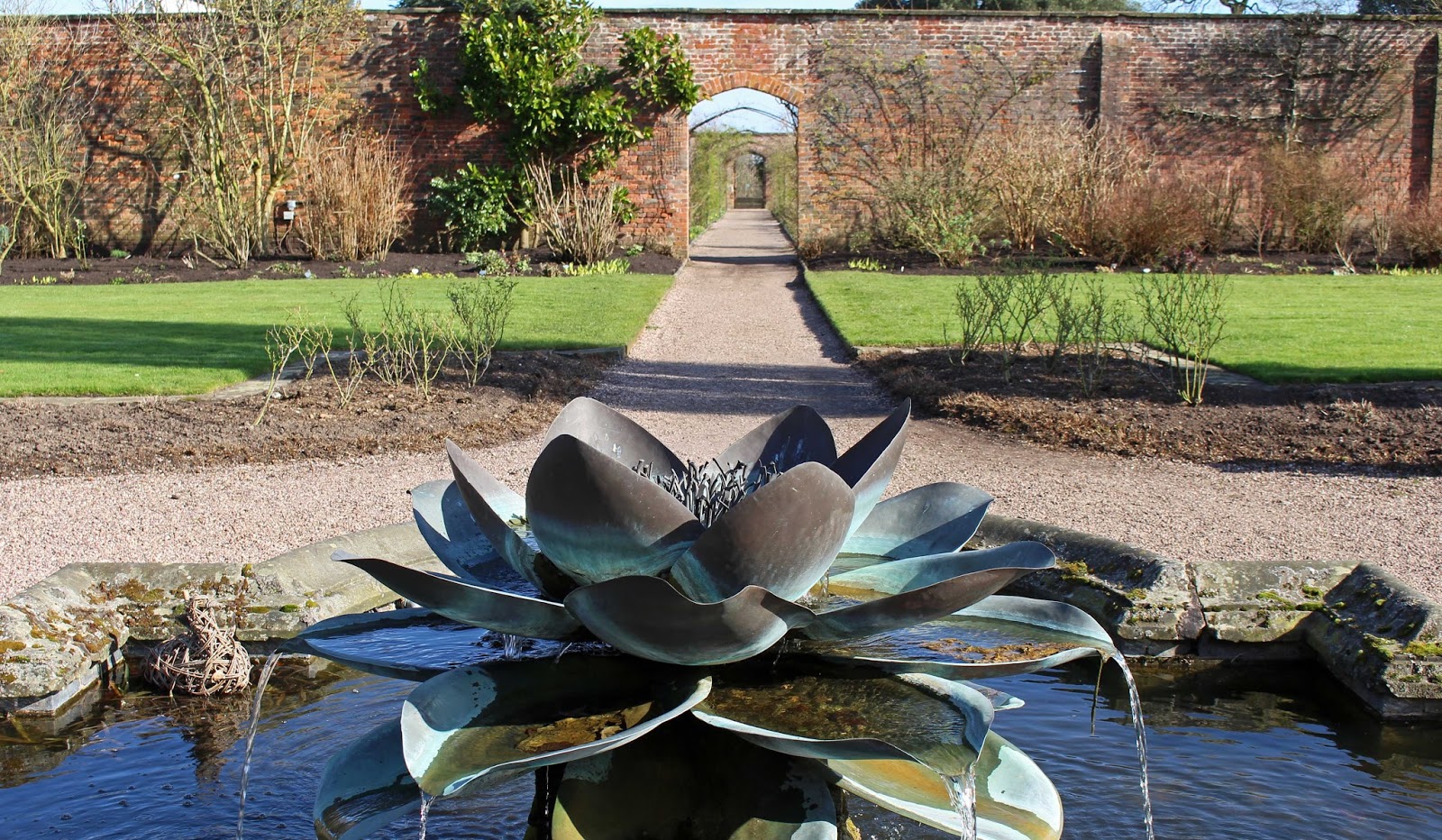 Back to the formal gardens - one of the views from the flower fountain, by Tom Leaper, which sits at the centre of the . 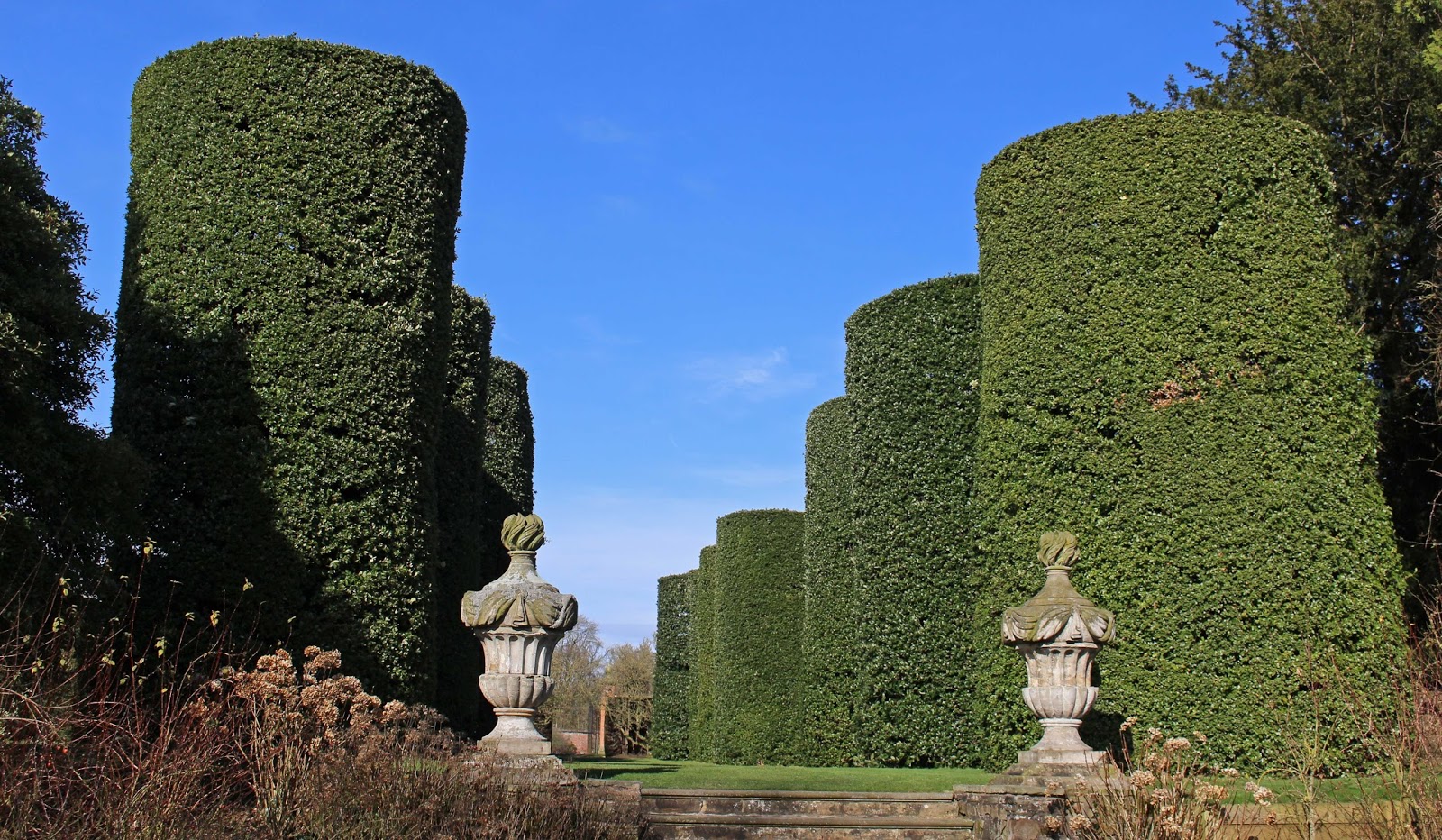 The impressive , with its seven pairs of holm oaks that have been pruned to the shape of cylinders. 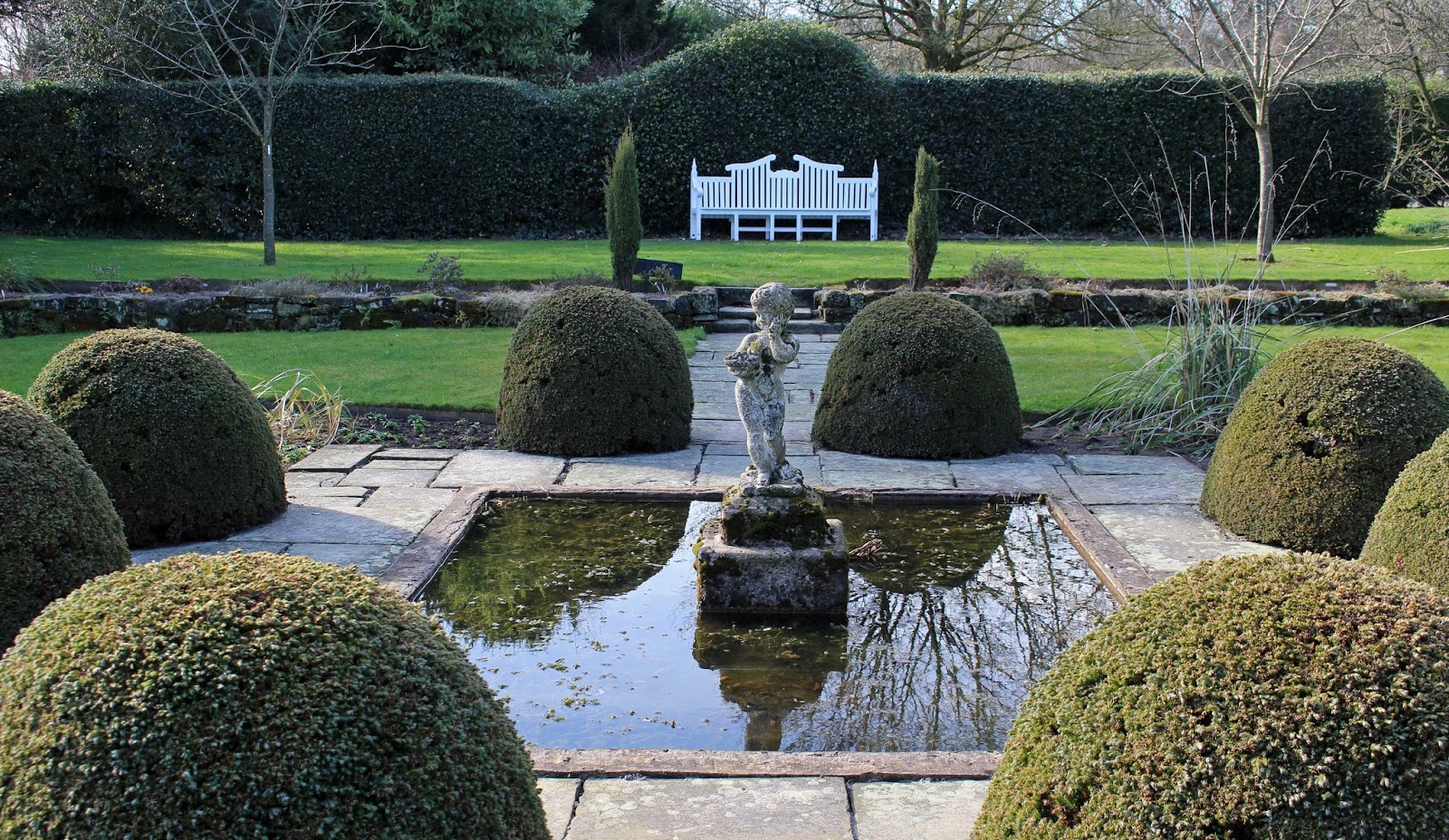 The , a sunken garden with a small central pond, was created in 1930 on the former . I love the rounded shapes of the topiary bushes. 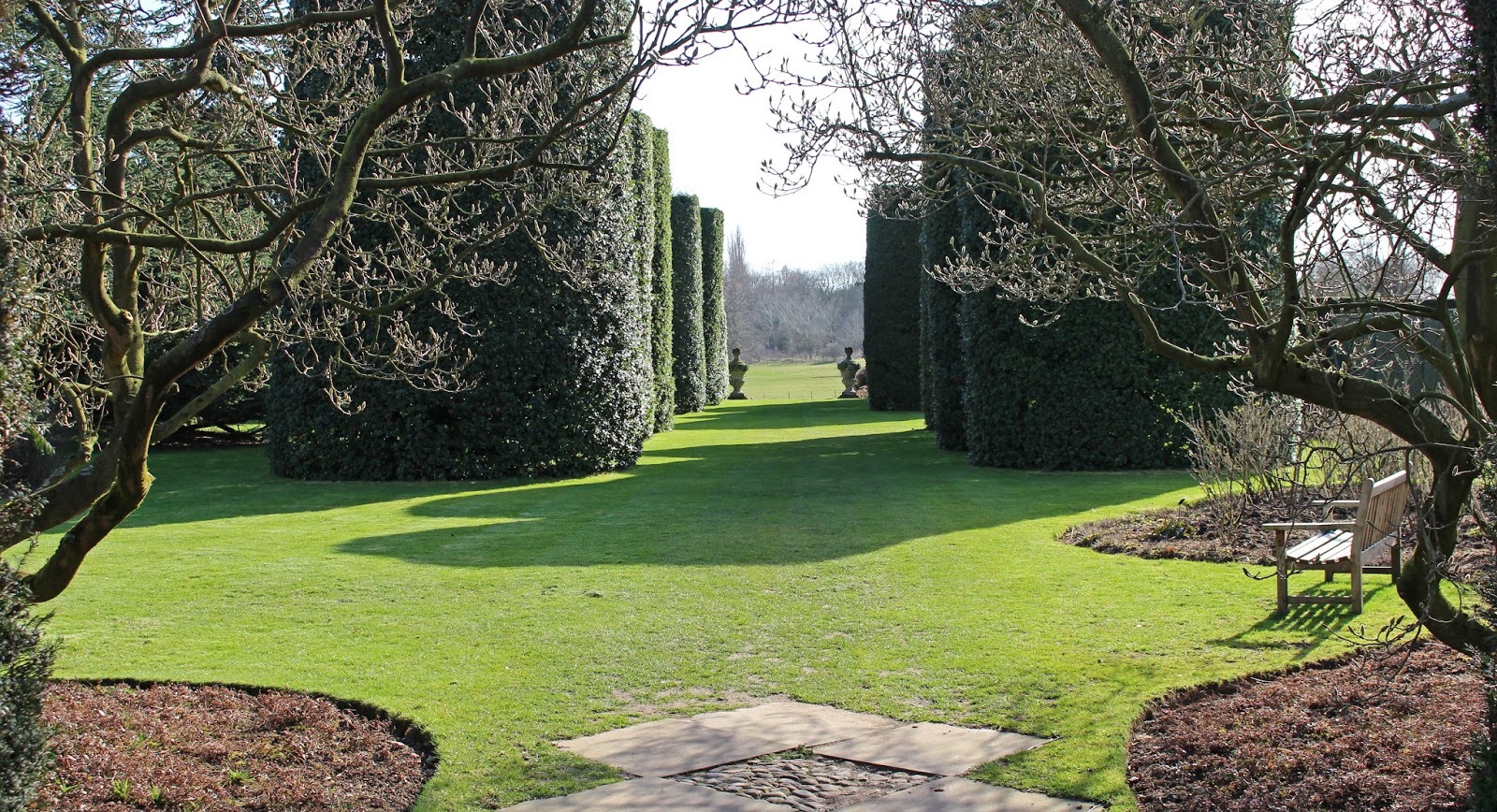 Another view of the . Those cylinders are about 30 feet tall and were planted by the present Viscount’s great-great-grandfather Rowland Egerton-Warburton in the 1830s. 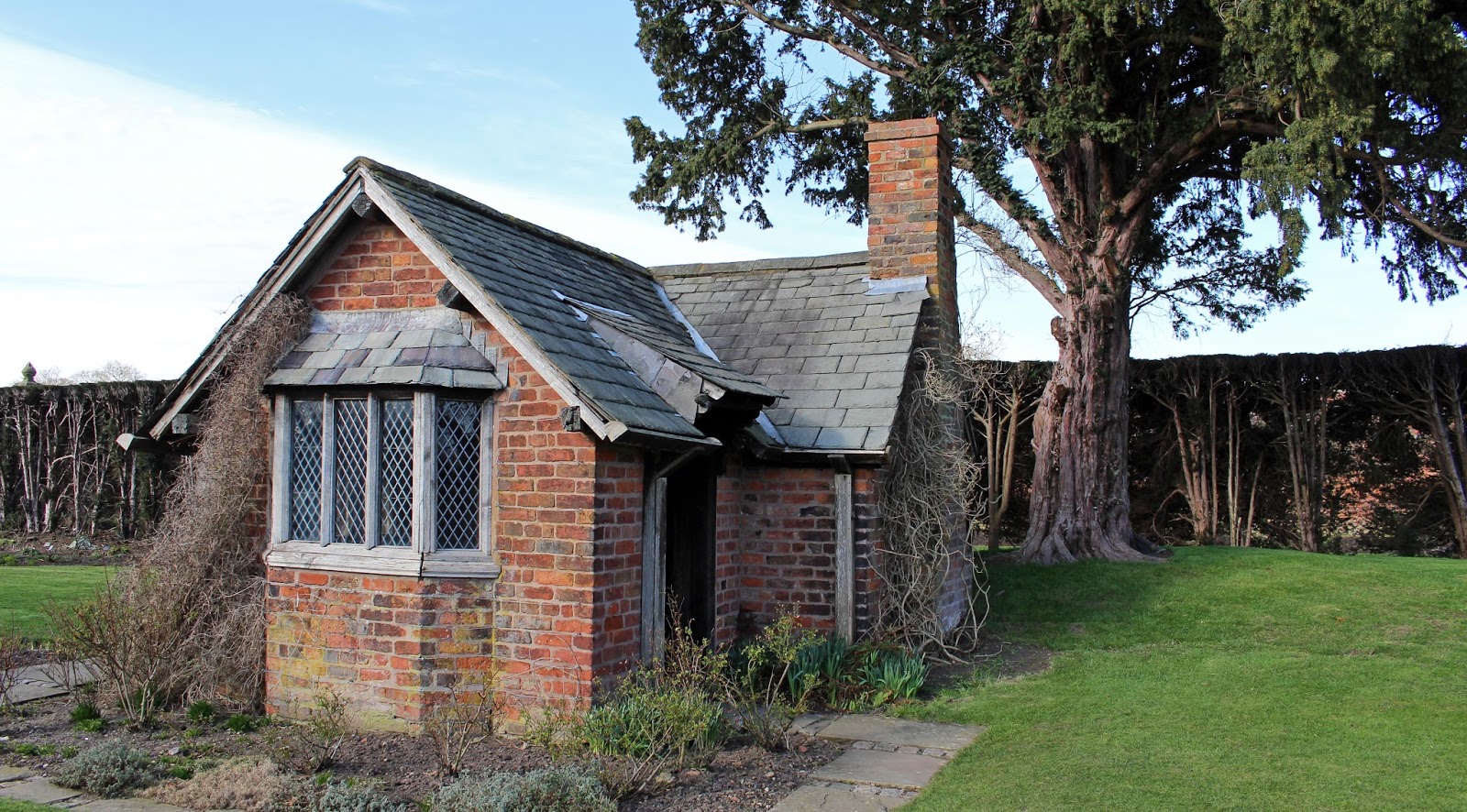 One of my favourite things in the garden was the Tea Cottage, a tiny half-timbered building dating from the eighteenth century, that was once used for garden tea parties. Inside, you could almost hear the laughter of children past.

Though spring has not yet really sprung at Arley, there were some flowers, like this prolific-blooming polyanthus and a little touch of lighting up one of the glasshouses, the kowhai. 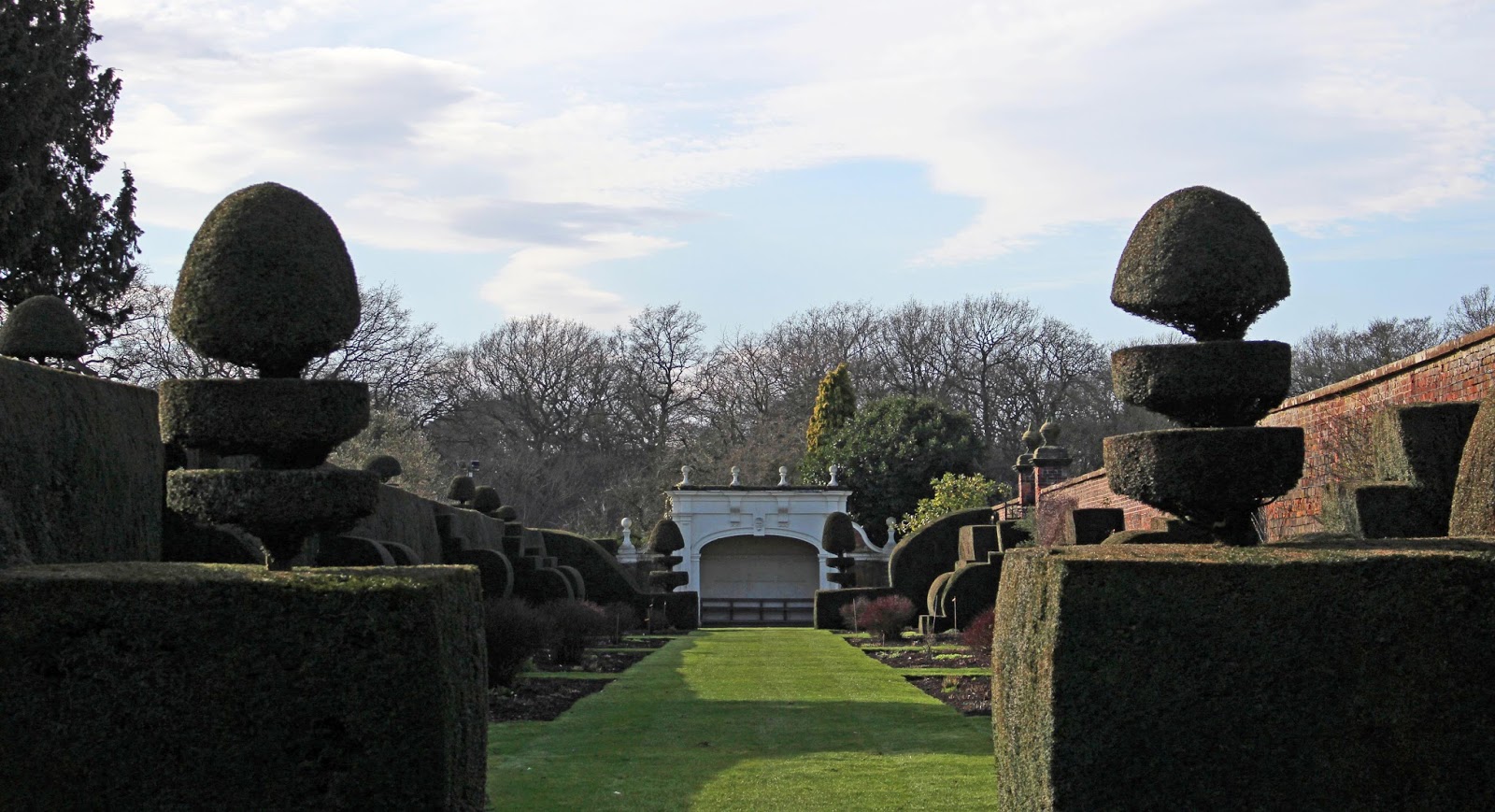 A view along the famed double herbaceous border, towards the Alcove, a beautiful enclosed garden seat that acts as a focal point at one end. This border dates from 1846 and is thought to be the earliest to be planted in . I particularly liked the topiary divides between the beds – more striking sculptural elements. 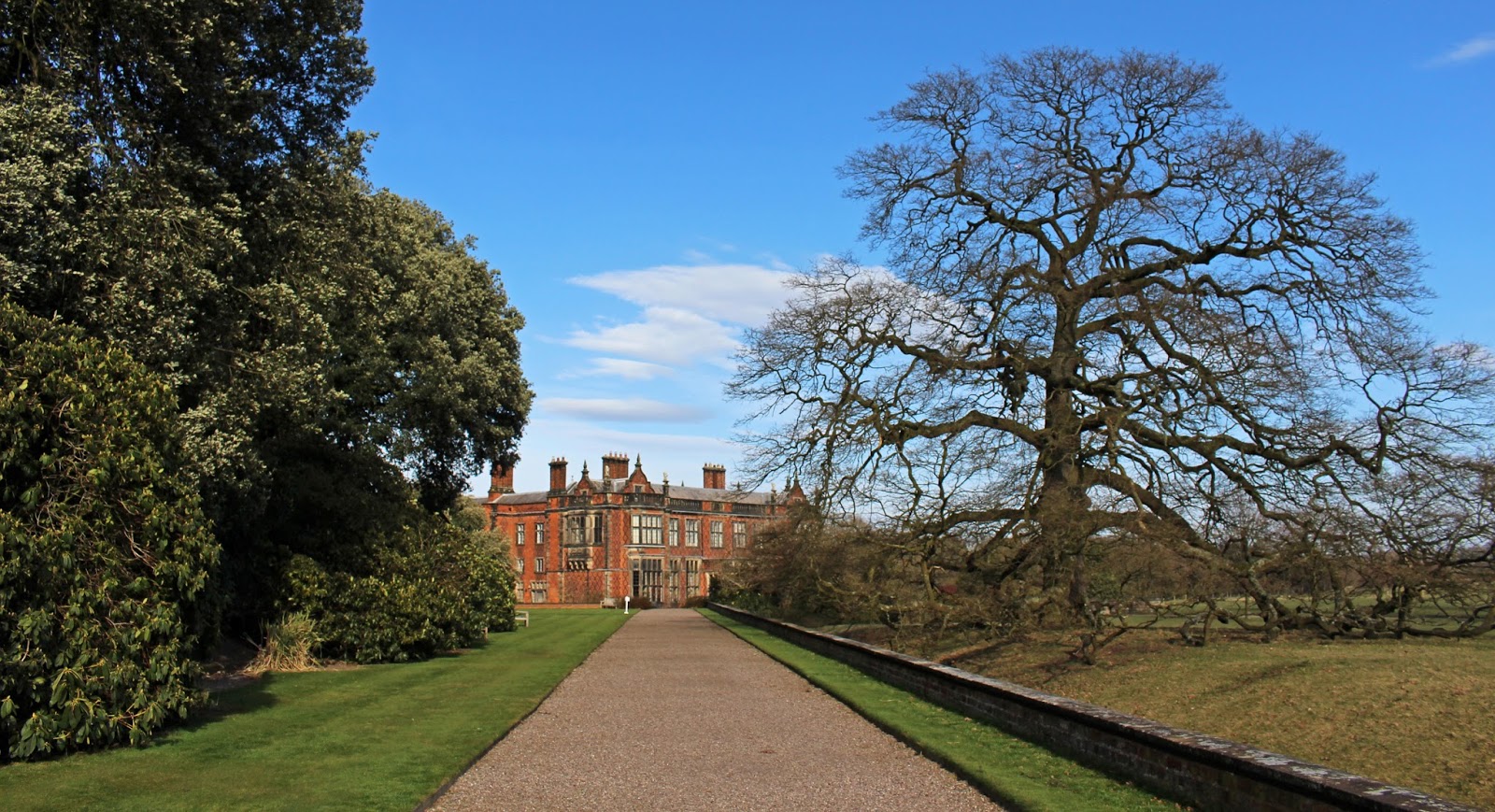 Looking back towards Arley Hall along the , a 200-metre walk that was added to the gardens in 1856. 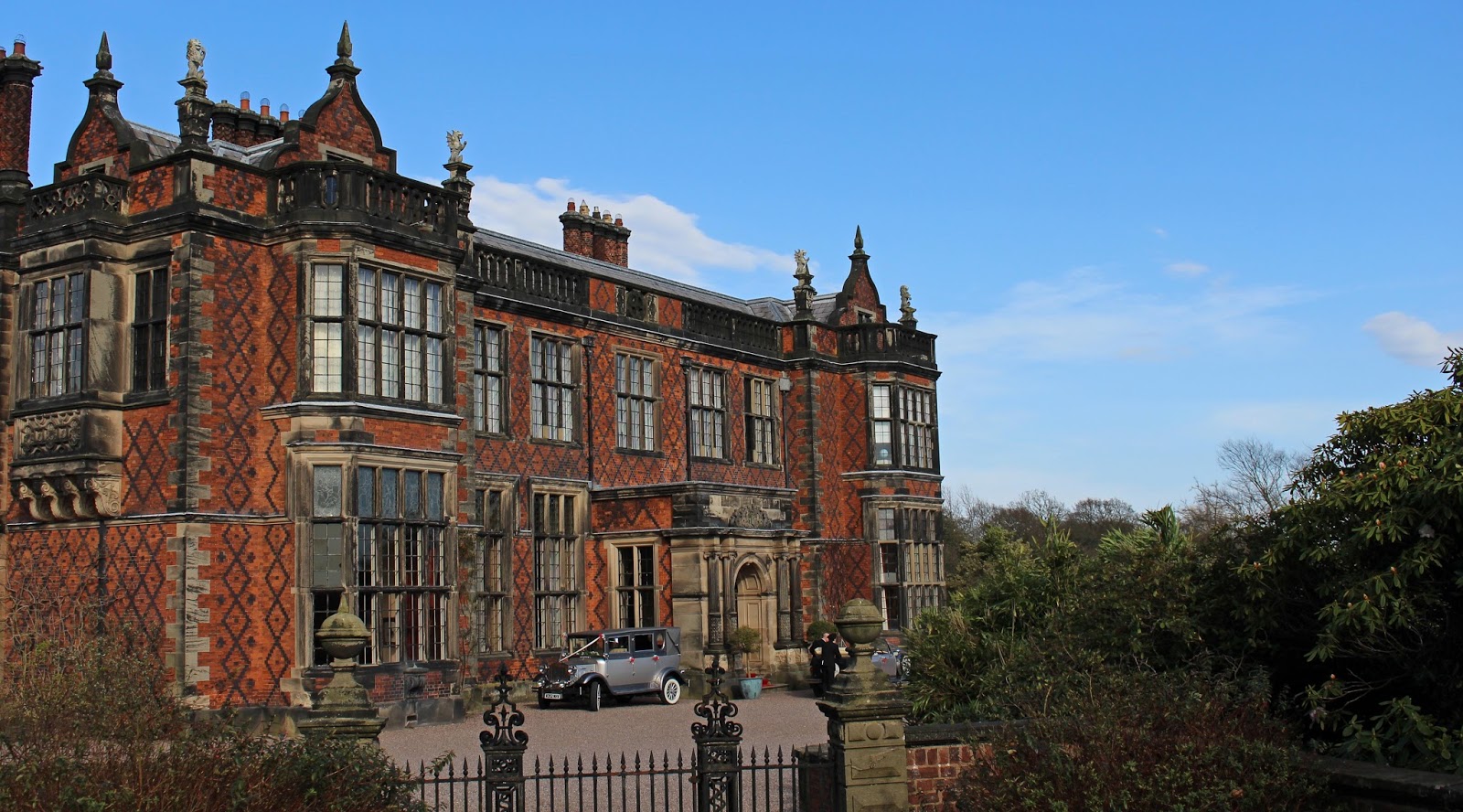 Arley Hall is only open to the public on Tuesdays, Sundays and Bank Holidays. At other times, it can be hired for private functions and is a favourite wedding location for the well-heeled. The vintage wedding car looked perfectly placed when I visited, liked a scene from history. 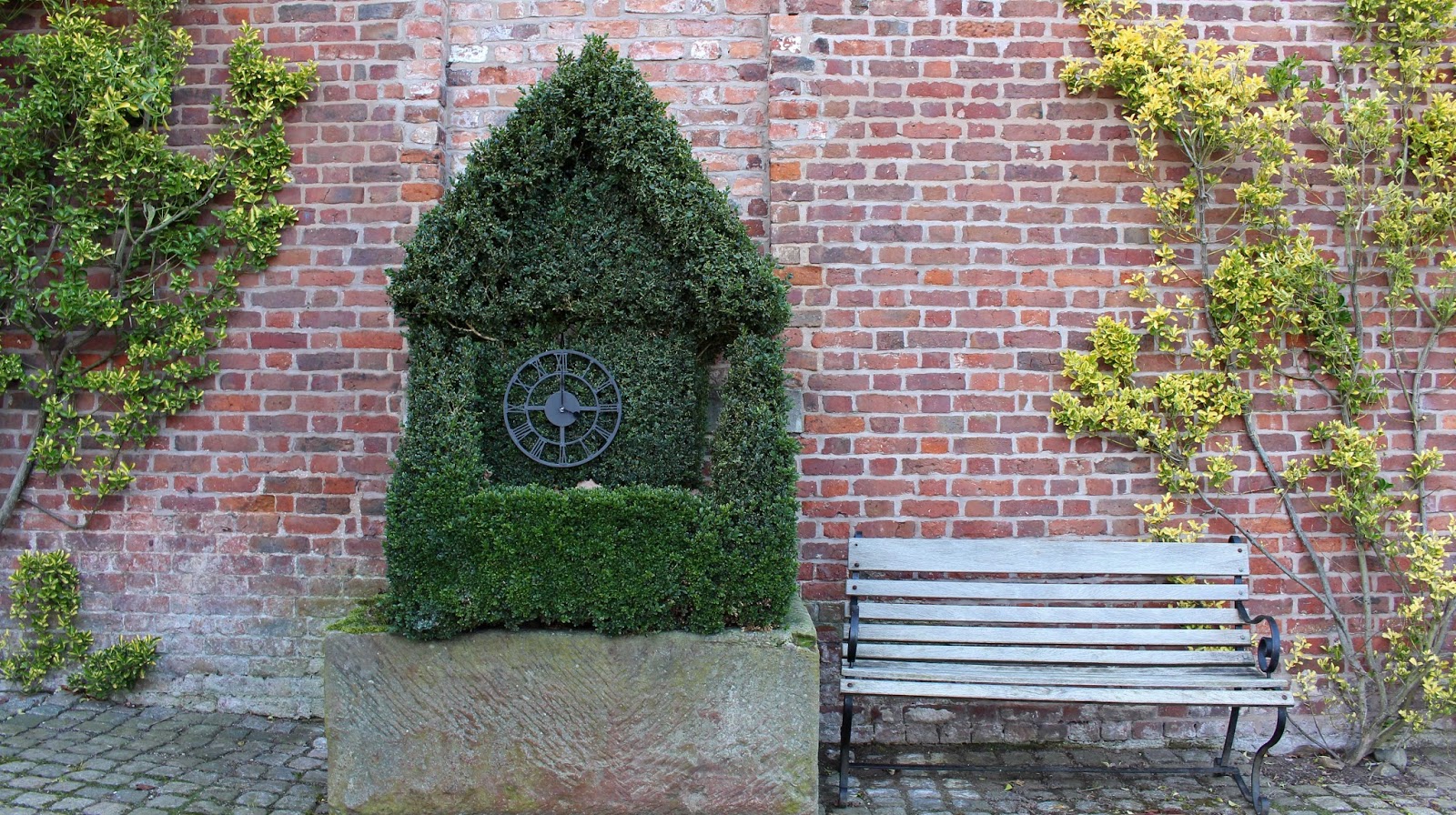 One last little gem I found tucked away by the toilets. Tick, tock, the bench sat by the clock! 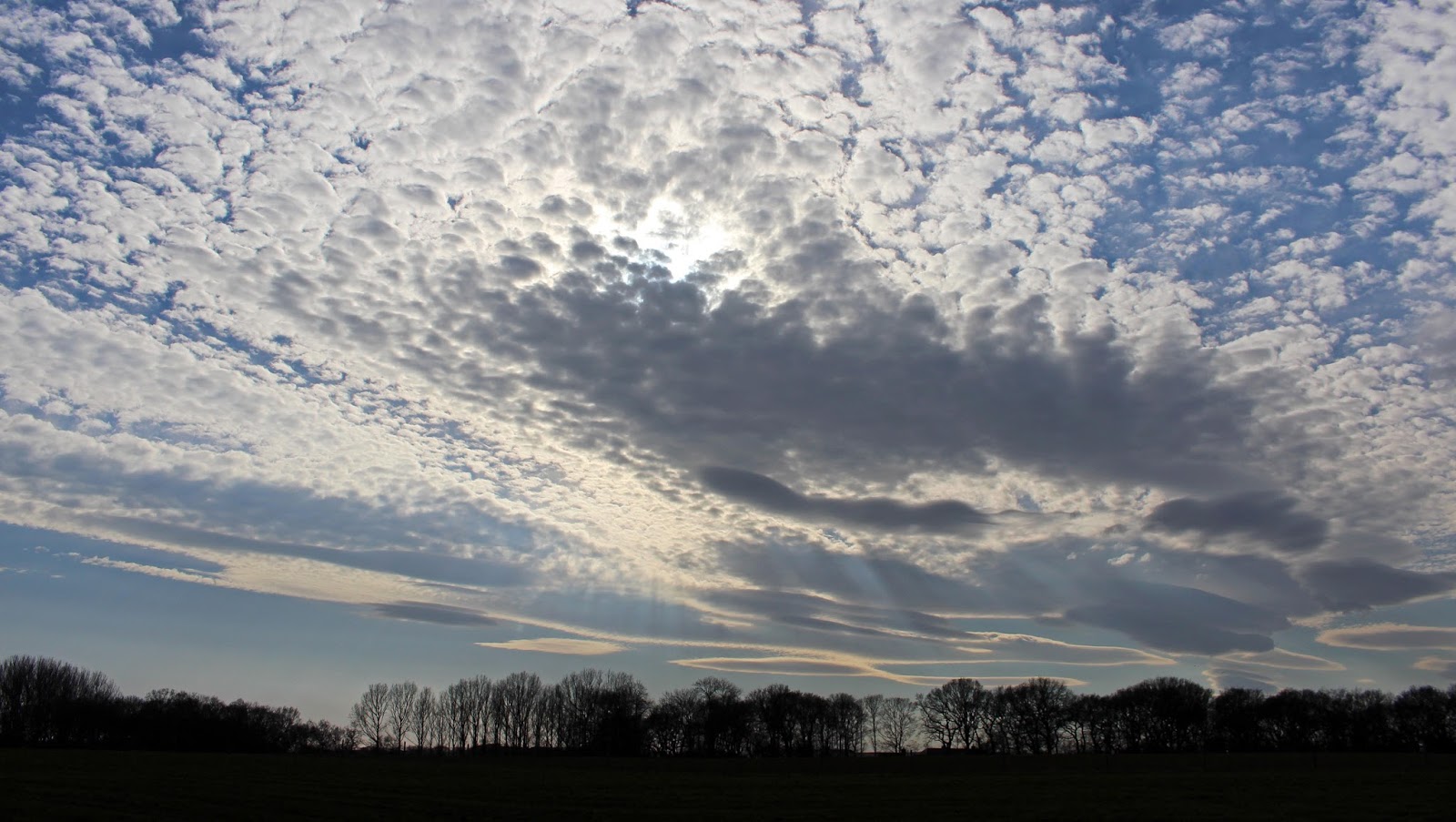 And what better way to finish a perfectly magical day than to have Mother Nature put on one of her spectacular cloud displays as I slowly wended my way homewards.
Posted by sconzani at 13:02