It seems to me that Grey squirrels are more than a little like cats – those cats that know when someone doesn’t like them and purposefully seek out their laps to leap onto – or, at least, that is certainly the personality of the Grey squirrel that inhabits our garden. Let’s call him Sammy.

My housemate / landlady – let’s call her Jane – hates him, with good reason, as the little imp nibbled all the apples and pears off her fruit trees well before they grew big enough for her to harvest but he didn't touch a single one of the plump juicy delicious apples on the neighbour’s tree.

Jane loves most wild creatures and has worked in environmental management so she runs a wildlife-friendly garden, not cutting the hedge when the birds are nesting in it, leaving little piles of branches for hedgehogs to burrow under, littering the back lawn with bread, seeds and apple cores for the birds to eat when times are lean. Trouble is, Sammy likes to pinch the birds’ food as well – and he’s not very smart in processing it, rather stupidly choosing to bury pieces of bread in the flower borders. Jane is not amused, neither by the waste of a good bit of bread, nor by the damage to her borders.

And just as cats are vilified for killing birds, so Grey squirrels are vilified for their adverse effect on the local environment. Though he was undoubtedly born in , Sammy’s ancestors were North American immigrants. First introduced to the British Isles in the late 1870s by local landowners who considered them ‘exotic’ (what were they thinking?), Sammy and his fellow American Greys have made themselves at home throughout most of the British Isles, much to the detriment of the native Red squirrels. Not only did Sammy’s ancestors bring with them the squirrelpox virus (SQPV), which didn’t harm them but kills their Red cousins, Sammy and his fellow Greys compete with the Reds for food. And as the Greys have a broader food range – they’re able to eat nuts with high tannin contents, like acorns, which the Reds cannot digest – they have a better chance of survival when winters are hard and food resources scarce.

Nowadays, there are estimated to be around 2.5million Greys in , while only 10 – 15,000 Reds survive, mostly in and the north east of . I was lucky enough to see a couple of Reds when I was here in the on holiday last summer and visited the National Trust’s pine woodlands at Formby, part of the National Red Squirrel Refuge and Buffer Zone. Although their local Red population was decimated by SQPV in 2008, numbers are once again on the increase, with help from the local rangers and an appropriate woodland management plan.

Luckily, there are plenty of other folks out there trying to save the Reds – and you can too, by supporting organisations like the Red Squirrel Survival Trust. Let’s hope they’re successful in their efforts as I’d hate to see the very cute locals overcome by the brash interlopers from across the Atlantic.

Along with the fine work being done by the RSST, there does seem to be a glimmer of hope in other quarters as well. Just last week I was reading environmentalist / activist / journalist George Monbiot’s piece ‘How to eradicate grey squirrels without firing a shot’, in The Guardian online, championing a natural solution to the grey squirrel problem, in the form of pine martens. He cited the current situation in where, it seems, pine martens have the Greys in full-scale retreat across the island and the Reds are moving in to territory abandoned by the Greys. Long may the Red repopulation continue!

In the meantime, here in , we still have Sammy scampering through our tree branches and hippity-hopping across the back lawn. Jane intends getting a trap and killing him but, if it were my choice, I just couldn’t do it. I do want to be environmentally friendly. I definitely want to help save the Reds. My mind tells me it’s the right thing to do but Sammy is such a little cutie that my heart wants to forgive him the sins of his ancestors and his kin. 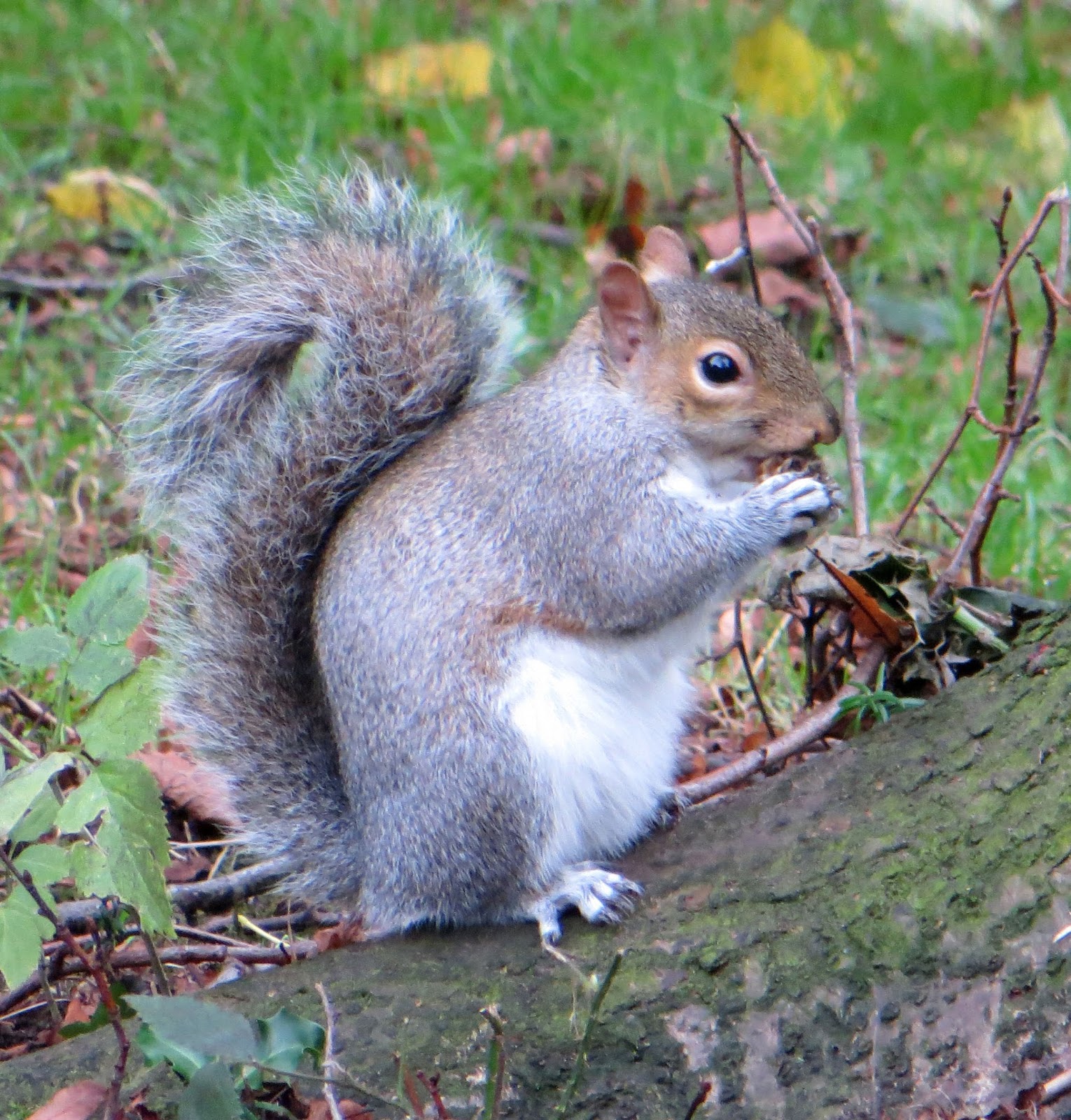 There’s just something about the way he sits back on his hind legs, nibbling on the nut he’s clutching in his front paws. There’s something about those big doe eyes, and the way he quivers and shakes his bushy tail. And Sammy’s not the only Grey in the neighbourhood. I’ve seen at least two others chasing each other through the trees at the end of the garden so, if Sammy goes, will those two just settle in to his vacant place?

And that’s not my only question. Did pine martens ever live in this part of ? Would / could pine martens survive in our semi-rural garden? Wouldn’t Red squirrels need a lot more pine trees in the area before they could be reintroduced? Wouldn’t we need a lot more woodland in general for both creatures to survive here in ? And, if that’s true, then, in the meantime, should Sammy be allowed his particular place in the English sun?

For me, the issue of Grey squirrel v. Red squirrel is a conundrum and I don’t know the solution. But, secretly, I will continue to enjoy Sammy’s antics while I can.