Bolivia days 6 and 7: a mountain of silver 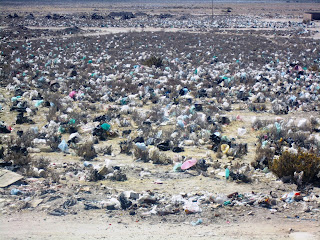 The bus left Uyuni at 9.30 for the 5½ hour journey to Potosí. At first, it was a narrow gravel road up ad over the hills behind Uyuni, close to which the roadside was absolutely littered with rubbish. Our first stop was at a small mining settlement to drop off and pick up locals, who stood in the aisle. From the green colour of the hillside, I presume they were mining copper. Just down the hill from that settlement we drove on to a new tarsealed road – though we kept having to detour round places where they were inserting hug drains under the road – so, no one had thought of that before they built the road?

There were occasional grazing vicuna and herds of llamas; there are road signs here that warn of llamas crossing. The bus was hot, as the windows wouldn’t open and there was no other form of ventilation – it gradually got more stuffy and smelly! But, on the plus side, there were trees outside! They were shrubby specimens for the most part, but some quite large willows and poplars were sucking life-giving water from alongside small streams.

There was a short stop about half way, for much biscuit eating by tourists and locals alike, and some squatting by locals. Then, onwards again. I snoozed on and off, woke up to take photos of a big mining town, and then we arrived at our destination, another big mining town, Potosí, where 60% of the 160,000 population still earn a living from mining. The earth has been good to these people.

The guide, Juan Carlos, looked like a smaller version of Javier Bardem – he’s probably married with 6 kids! He delivered me, and a Swiss couple, to our hotel, where I had a small room – but it was comfortable enough. I went out for a 2-hour walk around, and got some food, then chilled for the rest of the evening.

We – me, the guide and the Swiss couple – spent the next morning seeing the highlights of Potosí. As the couple spoke Spanish, Juan Carlos gave his spiel in Spanish, slowly, and I’m proud to say I understood about 90% of it! I may not yet be able to speak the language well, but my comprehension is definitely improving. We began by driving around the inner city, the Spanish colonial part – the indigenous population were forced to live elsewhere, even had their own churches to worship at – Catholicism was obligatory. There are 38 churches in the city, only 5 of which are still used – the others are museums, a theatre, or simply closed.

We then headed through the mining neighbourhoods, where tiny shops sell everything the miners need, from safety helmets and gumboots, to coca and dynamite. The Cerro Rico mountain, from which silver has been mined for over a thousand years, dominates Potosí and, although the quality of the silver that remains is poor, it is still mined, by hand. 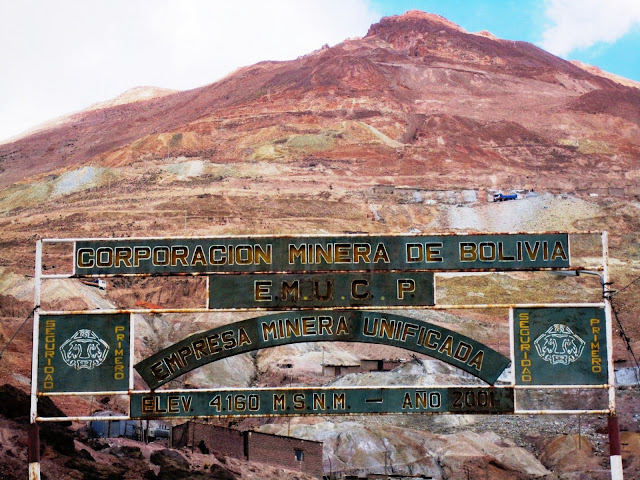 First, we bought small bags of coca leaves to give to the miners in exchange for their permission to take photographs. The same little shop also sold dynamite! We then went further up the mountain to see the action. It was quiet that day as many people were still enjoying time off for the Todos Santos (Day of the Dead) festival, but we visited two small mines and went a short way inside one – we weren’t suited up for a long walk inside like some tourist groups were, but even a short way was enough to get an idea of how dark, claustrophobic and airless it was. The miners work all day without a break for eating or drinking, so chewing coca leaves keeps them going. The first miner we saw had his left cheek totally stuffed with coca and his eyes looked red and a bit dazed. The second was coca-less, so full of smiles at receiving his gift.

The average life span of these miners is just 55 – then they die of lung disease, if they haven’t already been killed or incapacitated in accidents. Apparently, many lose the little fingers of both hands as the tunnels are so narrow that they scrape their hands against the sides when wheeling our barrow-loads of rock weighing between 80 and 100 kgs. There is no health system in Bolivia, unless you have a government job, so people have to pay for hospital visits, and there is no unemployment benefit or old-age pension. The mines are worked by co-operatives or private companies – mostly co-operatives, so perhaps the miners help each other through tough times, if they can. Understandably, young men no longer want to follow their fathers into the mines, but there is no other industry in Potosí. 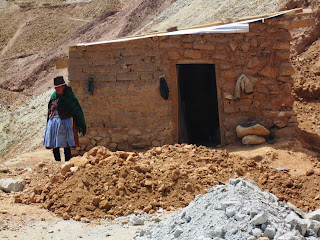 Women are not allowed to work in the mines, as it’s considered bad luck, but they do work outside. There was an old woman outside the first mine we visited; it was her job to keep count of the output of each member of the co-operative, so she had to live in a small adobe hut outside the entrance. There was water but no electricity or toilet – in fact, faeces and various other rubbish littered the ground all around. Two pigs wandered the site, I saw a sheep further down the mountain and, of course, there were dogs everywhere. A grim existence by anyone’s standards!

We went further up the mountain to a church, which has nothing to do with the miners and is, in fact, now the home of a family who help maintain the various telecommunications antennae that surround it. Our guide said the miners don’t worship Christ but, rather, the devil – understandable given the hellish conditions they work in.

From the mountain we went back down to the city, to a church and the university and a small market, before being dropped back at the hotel. I bought a t-shirt on the walk back – I had thought I might get something in silver from Potosí but the guide said all the silver is exported. 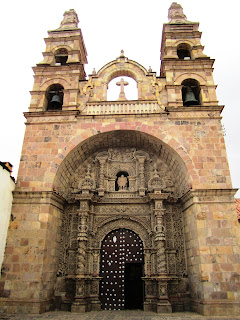 I had a few biscuits for lunch and put my feet up for an hour, then wandered down through the city streets to meet the Swiss couple at the former Mint House, now a museum. The tour there took 1½ hours and was fascinating. There were former mint machines and coins, an art gallery housing religious artworks from the now-closed churches, minerals from around the world, and a couple of rooms of archaeological remains, as well as lots of silver – and police. Their main job was telling tourists who hadn’t paid the extra fee to stop taking photos! Another interesting day!