Bolivia day 2: getting to Uyuni

After a lazy morning, resting up for the long journey ahead, Tony the tour guide picked me up from the hotel at 1pm and took me to the bus station. The Naser double-decker to Oruro departed at 2pm and arrived just after 5pm.


We climbed up out of La Paz, before heading south. La Paz is a city of about 1.3 million people, according to my tour guide, so about the same population as my home town of Auckland, but La Paz’s setting is unique. It sits in a huge steep-sided canyon, with another large separate city, El Alto, built on the plains above it, and the high snow-capped mountains of the Altiplano bordering one side. Due to its unique topography, the elevation of La Paz ranges from 3200 to 4000 metres, so many visitors suffer from altitude sickness when visiting the city. Luckily, coming from Cusco, that didn’t affect me.

There was snow and ice in places along the roadside, something I hadn’t expected, and sprinklings too on the surrounding hills. It was very windy and obviously cold out, as people were well wrapped up, huddled in doorways or crouched behind walls out of the wind. It was brown, brown countryside and looked barren, but the fields had been ploughed – though there no signs of the green of growing crops. And there were no trees, and only the tufty grass that grows in the high country the world over. Occasionally, I could see small herds of cows and flocks of sheep, with their ever-mindful shepherds in attendance – no fences here to contain wandering animals. In places, there were also llamas – once I saw one rolling on its back in the sand like horses do.﻿
﻿﻿﻿﻿
﻿﻿﻿

We passed through several small settlements, with buildings constructed of adobe or red bricks. There were few painted walls, except those sponsored by advertisers: popular ones are the green and white of Vivo; the red, black and white of Viacha, a cement company; and the blue and white Tigo label is everywhere, a telecommunications company, I think. The ubiquitous plastic bag littered the fields bordering the road and, near the towns, the dry stream beds were full of rubbish.

At Oruro, tour guide Martin met me off the bus and took me to the train station. It was interesting to chat to him. He is half Bolivian, on his father’s side, and half German, through his mother – his parents met at university in the US. They have since divorced but Martin enjoys duel citizenship, so he has lived in Europe as well as Bolivia. However, he’s now married to a Bolivian woman and has a young daughter, so prefers to live in Bolivia. He said that because his wife and child are darker skinned than him they suffer much prejudice when visiting Germany. Martin teaches German at a college in Oruro, and does tour-guiding part-time because he enjoys meeting people from other countries and cultures. I enjoyed meeting him too! 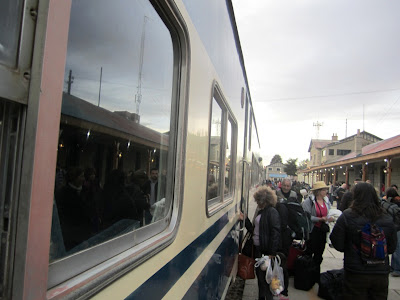 The train to Uyuni departed at 7pm. I was in first class, which was very comfortable, with reclining seats, though my seat was broken and wouldn’t recline as far as the others – actually a good thing, as I didn’t want to sleep past my stop – the train goes on to Chile! It was very hot. There were two movies: the latest Johnny Depp Pirates of the Caribbean movie, which seemed good but was in Spanish so I’m not entirely sure what was happening in the story; and then the X-men origins movie, which had English sub-titles. There actually weren’t many English-speaking travellers on the train – lots of Belgians, a big group of French, and various other Europeans.

After 7½ hours of chugging slowly along, we finally reached Uyuni at 2.30am. Luckily, my pick-up person was waiting and I was snuggled up in my lovely big comfy bed at the Tambo Aymara Hotel by 3am.
Posted by sconzani at 22:00