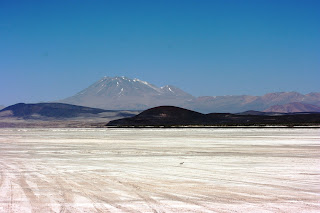 Our wake-up knock was at 6.45 but I was already up and showered. We had breakfast and then headed off into the wild blue yonder. And it was wild – the landscape, the creatures, the ride. And it was blue – the sky was an unbelievable shade of blue, so clean and clear.

Al, the tour guide, rode in our 4x4 all day but that just meant listening to his mix tape several times over – he wasn’t exactly a mine of information and saved what he had to say till we stopped, so he didn’t have to repeat himself. But the scenery spoke for itself and I struggle to find the right words to describe how amazing, outstanding, awesome it was. 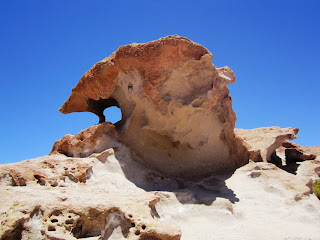 After heading south from the salt flats and climbing up over ancient lava flows, our first stop was at the end of an old lahar, where the lava had petrified into weird and wonderful formations and where there was a great view of the active Ollague volcano – just steaming fumeroles near its summit, no explosions!

This was just the beginning of a day of dramatic scenery in what must once have been an incredibly active volcanic area. We drove past some high snow-capped mountains and others stained with the white, yellow and rust colours of the mineral emanations of extinct volcanoes. The photos of these places look like they’ve been photoshopped but, believe me, they are real. 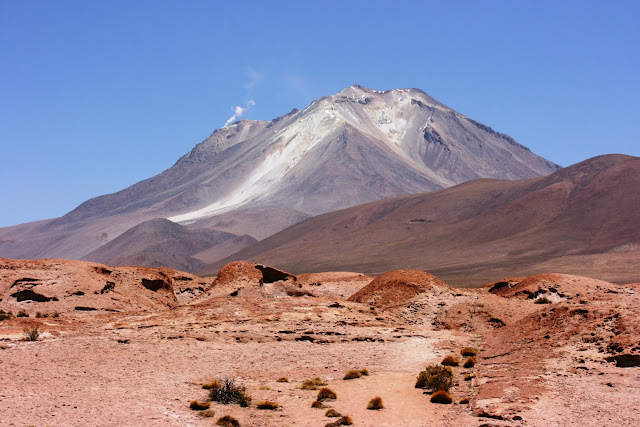 Next we came to Lake Cañapa, the first of the nine breathtaking lagoons that dot the Andean Altiplano and here we saw our first of the three species of flamingos (the Andean, Chilean and James) this area is famous for. One interesting fact Al told us was that the flamingos have the ability to control their heartbeat, to allow themselves to sleep in the water to try to avoid their enemies, the fox and the puma. However, when it’s cold (and it gets down to the minus twenties and thirties in winter here) the water freezes and the flamingos become trapped. 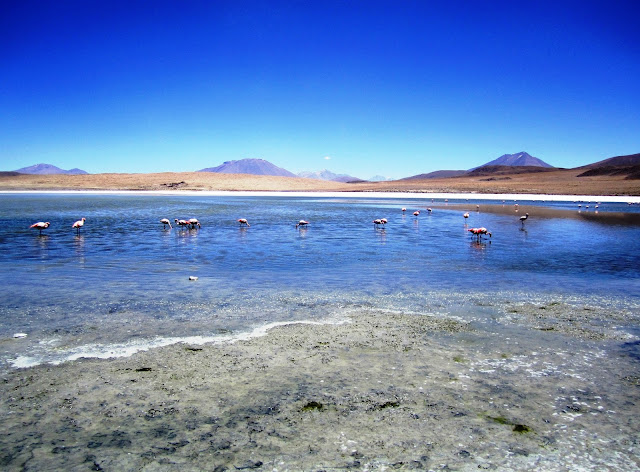 This beautiful lake-side setting made the perfect place for our lunch stop – we carried food with us and the drivers prepared our lunches each day.

And cameras clicked constantly, recording for posterity the scenery and the wildlife.

A small group of vicuña, the llama’s little cousin, came down to drink from the lake and, as we were leaving, a culpeo ran across in front of our vehicles.

Also known as the Andean fox, it is actually a South American species of wild dog.

It lingered, familiar enough with tourist vehicles to expect some food and it wasn’t disappointed.

Its normal diet consists of rodents, rabbits, birds and lizards, but it also enjoyed the chicken bones left over from our lunch. 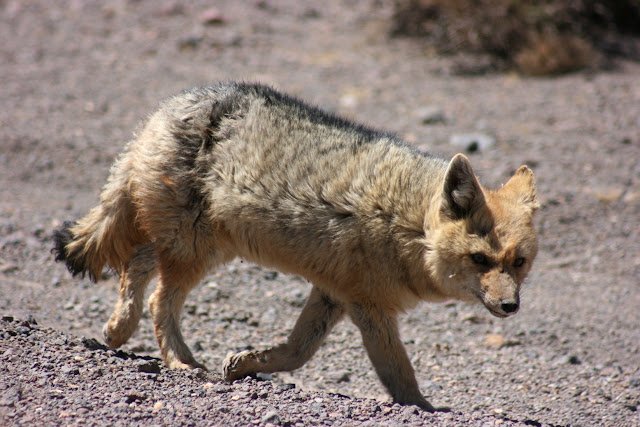 The next lagoon was officially named Hedionda but has long been known as ‘Stinking Lake’ due to its high sulphur content. According to Wikipedia, the lagoon also has mineral deposits of thenardite and ulexite, gypsum, lithium, boron and potassium, amongst others. The large flocks of flamingos didn’t mind the minerals, or the smell. More photos! 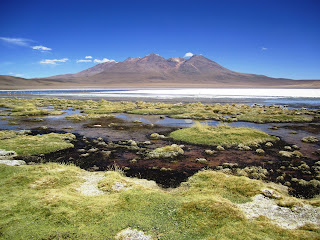 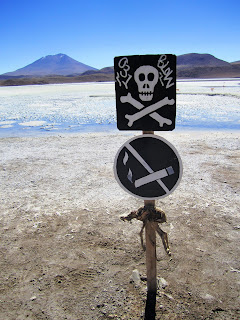 As we drove on, we began to cross the Siloli Desert, the highest in the world at 4500 metres above sea level. It’s not large – only about 100km2 – but it contains some strange formations of volcanic ignimbrite or petrified lava, eroded over the aeons by the violent power of the wind. The stone tree is the most well known, but the surrounding rocks were equally stunning. And, as the wind was fierce and the sand was stinging any exposed skin, I could certainly understand how the rocks had been ground down. 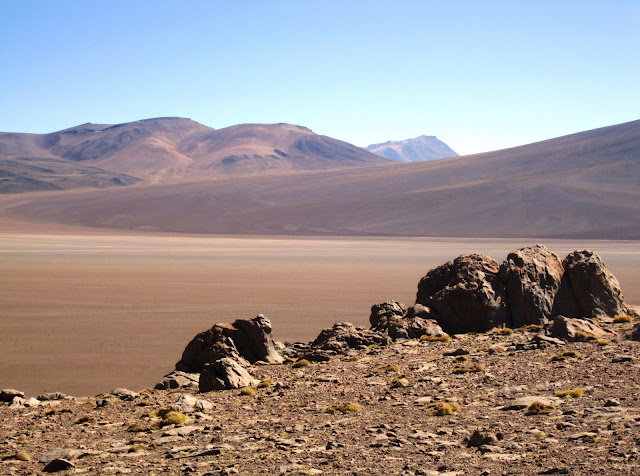 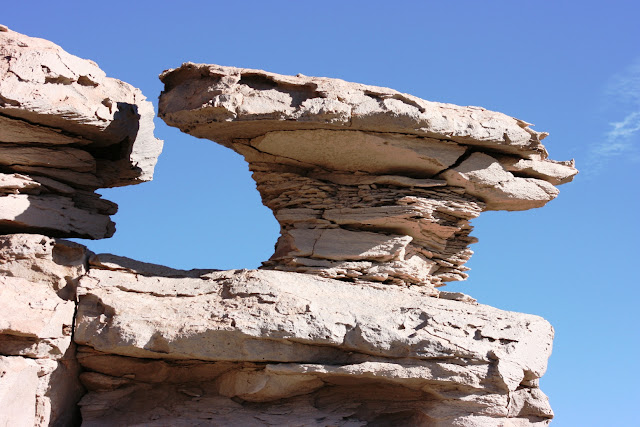 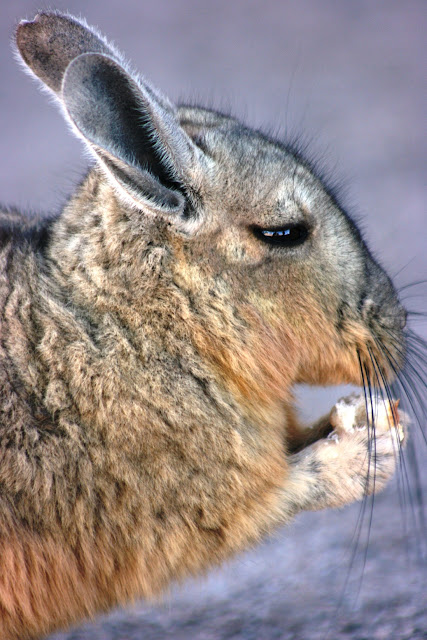 At the edge of the desert we saw more wildlife, the northern vizcacha. This member of the chinchilla family looks like a cross between a rabbit and a squirrel and is native to the Peruvian Andes. It lives in large colonies, separated into individual family units, and eats a wide range of plant matter, settling for almost anything it can find growing in the harsh, rocky environment. It also eats hunks of bread, which was all we had to entice the bunnies down from their rocks. They were most obliging and, once again, the camera shutters clicked madly.

More driving followed, which sounds tedious, but every turn presented another remarkable panorama and our last stop of the day was the most remarkable of all. At 4300 metres above sea level and with an area of 60km2, Laguna Colorada, or Red Lagoon, literally is red, due both to volcanic sediment and the microscopic algae that thrive in its waters. The lagoon is shallow, only 30 to 50cm deep, and is surrounded by the white mineral borax, so is considered the perfect habitat for flamingos. And the plumage of these flamingos is more red than normal because of the algae in the lagoon. You guessed it – more photos!
We had entered the Reserva Nacional de Fauna Andina Eduardo Avaroa at the Red Lagoon, and spent the night very close to the lake, in a very basic hostel where the six of us from each vehicle slept in the same room. Dinner wasn’t ready till 9pm and it was lights out again at 10. Luckily, we were given hot water bottles and sleeping bags, as well as blankets, as it was very cold. Most of us slept in our clothes! The next morning, Richard told me I had been laughing in my sleep – I don’t remember why but maybe my laughter was a reflection of what a superlative day it had been. 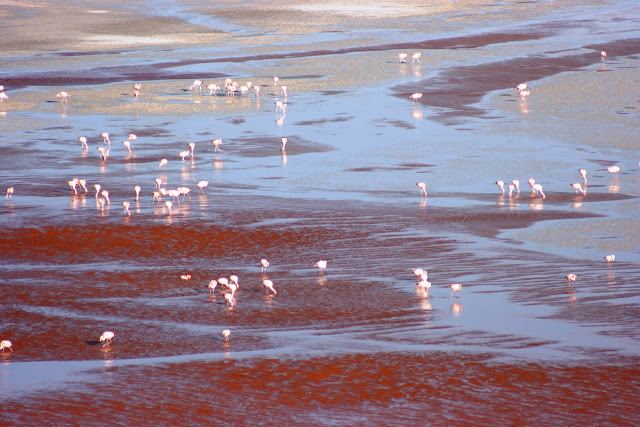