In a lonely grave in Cardiff: Herbert Ivan Babbage

During a guided walk around the (relatively) new part of ’s last weekend, I spotted, amongst the long sad lines of World War One war graves, a large flat slab embedded in the grass. The words ‘’ and ‘artist’ glinted in the weak autumn sunlight and my curiosity was immediately aroused. Who was this artist and why was he buried amongst the war graves in a Welsh cemetery? Here is what I have discovered. 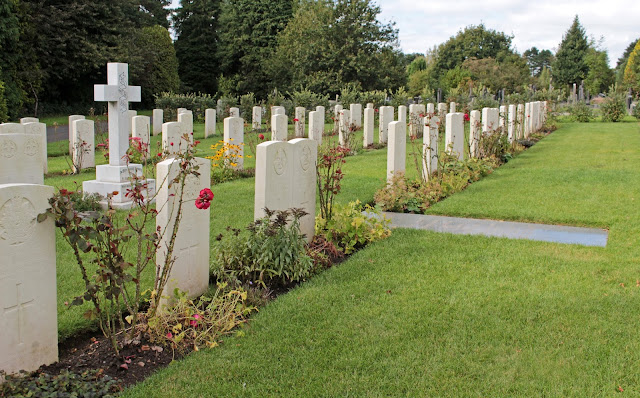 Herbert Ivan Babbage was, in fact, born in , on 10 August 1875, the fourth son of Charles Whitmore Babbage and Amelia Barton. You may perhaps recognise the Babbage surname – Herbert’s great-grandfather Charles Babbage (1791 – 1871) was the famous mathematician credited with conceiving the idea of a programmable computer. What an impact he has had on the modern world!

Herbert’s grandfather Benjamin Herschel Babbage (known as Herschel) (1815 – 1878) was another interesting character. After training as an engineer, he worked for a time on railway projects in both and with none other than engineer extraordinaire, Isambard Kingdom Brunel. Then, in 1850, a commission from Patrick Brontë, father of the famous writing sisters, resulted in The Babbage Report, which improved the horrifically unsanitary conditions that had previously caused so much early mortality in the town of where the Brontës lived. Soon after he’d helped  to clean up their town, Babbage moved to , initially to perform a geological and mineralogical survey of the colony, and he then went on to explore and survey much of South Australia.

Herschel’s son, Herbert’s father, Charles Whitmore Babbage often accompanied his father on his surveying expeditions and is known to have produced some fine ink drawings of aspects of life in the young colony of so it may be from his father that Herbert inherited his artistic talent. One of Charles’s early sketch books, containing 61 drawings, still exists and is now held in the collections of the National Library of Australia.

When he was just five years old, Herbert, his mother and his two surviving older brothers, upped sticks and moved to , arriving in on the Union Steam Ship Company’s SS Rotomahana on 14 March 1881 (Star, 14 March 1881, p.2). It seems the family may have moved to escape scandal, as Charles Whitmore Babbage, having lost money while speculating on the stock exchange, had subsequently been found guilty of embezzling £1616 3s 10d and of forging a cheque for £9955. Much to the horror of local respectable society, in October 1876, the Chief Justice of Adelaide’s Supreme Court sentenced Babbage to seven years in prison, all with hard labour (Evening News, Sydney, 7 October 1876, p.5).

Following his release from prison, Charles Babbage joined his family in , and they eventually settled in the Wanganui area, which is why that town is named on Herbert’s gravestone. After studying art at , Herbert also worked at the College, from 1899 to 1904, as a pupil teacher under the painter D. E. Hutton. According to Una Platt’s book Nineteenth Century New Zealand Artists: A Guide and a Handbook, Herbert then travelled to Europe, studying firstly in London and then at the Académie Julian in Paris, and painted many fine landscape and waterside subjects in both watercolour and oils.

In 1909, Herbert Babbage returned to , where he exhibited his work in Wanganui, New Plymouth and the capital city, . By 1913, he had returned to and was living at St Ives, in , where he worked from one of a collection of artists’ studios in .

Many of his English and European artworks were displayed in local exhibitions, and Herbert is commemorated on the St Ives Arts Club Memorial.

When the First World War began, Babbage was too old for active service overseas so joined the Royal Defence Corps and served with 23rd Company, helping to guard the railways of and the surrounding countryside from enemy attack.

During this time, one of the letters Herbert wrote to his family back in was reproduced, in part, in a local newspaper (Hawera & Normanby Star, 14 June 1916, p.5):

ON DUTY IN . AN ARTIST'S LETTER
In the course of an interesting letter, dated April 25th, Mr H. I. Babbage, formerly of Hawera, who has been doing special military duty in for a considerable time, says that the hours are pretty long owing to air raids. The men have 24 hours on and 24 hours off, in addition to fatigue duty in the spare time. Writing of the season he says:—"We have had the worst winter in the memory of living men. It has been a regular old-timer one reads about. Early in March we had a blizzard. It snowed for two weeks on end. Then at the end of March another blizzard lasting two days, and in that time the drifts of snow were 20 feet deep and numbers of people perished in them. All trains were stopped, some snowed up, and all telegraph wires were down; the poles simply smashed off in the gale like reeds. The wires weighed tons, and were like great white ropes as thick as one's arms. Two motor busses were snowed up outside our billet in the street. It was pretty trying at night time on top of the viaduct, as they were so exposed." His picture, which gained a place at the , he worked at in his spare time. The snow effects, he says, were most lovely. Not only was the picture hung, but hung “on the line,” which means the best place in the Gallery. In concluding his letter, Mr Babbage says:—"All the Reserves are now formed into one, with headquarters in , and are now called the Royal Defence Corps, as the King wanted to show his appreciation of the services of the various corps."

The viaduct Babbage mentions in his letter was the Goitre Coed Viaduct, engineered by his grandfather’s former colleague Isambard Kingdom Brunel, and the painting that was so highly esteemed by the Royal Academy was entitled ‘The Viaduct’, ‘a snow scene taken after the last blizzard, and shows the dark viaduct looming up amongst the snow clad hills, with the river below’ (Auckland Star, 20 June 1916, p.9).

It seems the severity of the conditions in which Herbert Babbage was serving were, eventually, to cause his death, on 14 October 1916, aged just 41. The Manawatu Standard of 24 October 1916 (p.7) reported as follows:

Mr Herbert Ivan Babbage, son of Mr C. W. Babbage, of St. John’s Hill. Wanganui, and a well-known artist, was in when the war broke out. He joined the Duke of Cornwall’s Light infantry, and was continuously engaged in home defence. A short time ago he broke down under the strain, and had to undergo an operation, from which he never recovered, word of his death having just been received. Mr Babbage held an exhibition in Palmerston North a few years ago and a number of his pictures were purchased by local admirers.

Herbert Babbage’s artistic skills have not been forgotten in his adopted country of . A collection of his watercolours, painted between 1898 and 1905, is held in the Alexander Turnbull Library, in Wellington; three of his oil paintings are with the Hocken Library at the University of Otago in Dunedin; and Wanganui’s Sarjeant Gallery has eleven works by Babbage in its permanent collection.

In a few weeks, it will be 99 years since Herbert Babbage died as a result of his service during the First World War. It is important that he, and all those who have died in the service of their countries, are remembered and honoured, and I am glad that I have been able to uncover and share a little of the story of Herbert’s life.

His gravestone in , , reads as follows: 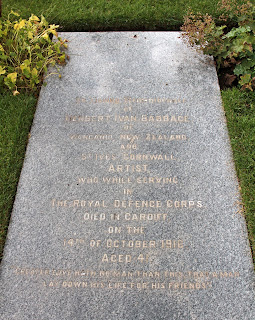 In Loving Remembrance
Of
HERBERT IVAN BABBAGE
OF
AND
ST IVES,
ARTIST
WHO WHILE SERVING
IN
THE ROYAL DEFENCE CORPS
DIED IN
ON THE
14TH OF OCTOBER 1916
AGED 41
“GREATER LOVE HATH NO MAN THAN THIS, THAT A MAN
LAY DOWN HIS LIFE FOR HIS FRIENDS”