The birds in my garden 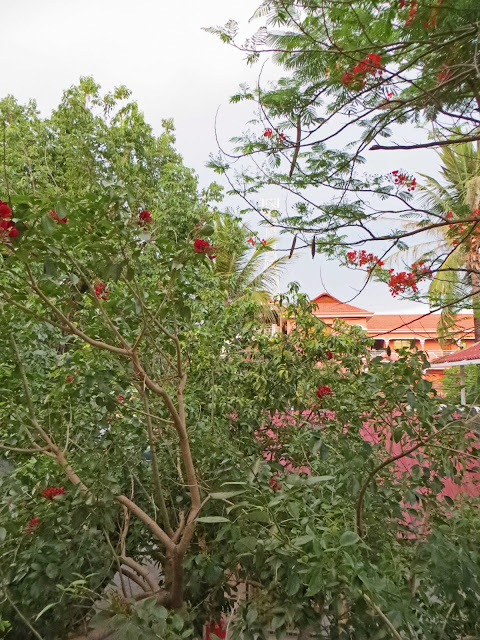 Outside my bedroom window, I am lucky to have several varieties of tree growing. They’re not actually in my hotel’s grounds but rather in the grounds of the French language school in the next street, which has its own small café immediately under my first-floor window (and, yes, the food is good!).

There’s a mango tree, which the school’s caretaker and his family raid on Sundays when the school is closed, as this is mango season here in . More interesting for me are the two flowering trees, as they attract several species of bird. The trees are a Coral Tree (known as the Roulos tree here, and a variety of Erythrina) and a Royal Poinciana (also known as a Flamboyant) (botanical name Delonix regia). Both are flowering now and, as the Coral Tree in particular is rich in nectar, it attracts both nectar-loving birds and those that feast on the small insects that are also attracted by the nectar. 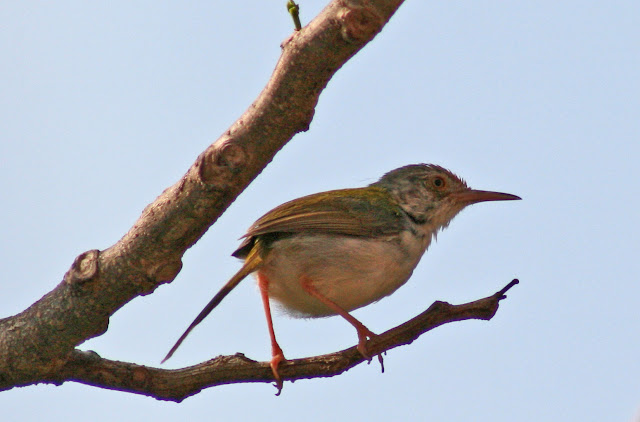 This is the smallest and loudest avian visitor, a Tailorbird. It is also probably the most elusive and fastest moving, hence the poor quality photo. Though I’ve never seen a nest, the bird apparently gets its name from the way the nest is constructed; the edges of large leaves are sewn together with plant fibre or spider’s web to make a cradle in which the Tailorbird then builds the actual grass nest. 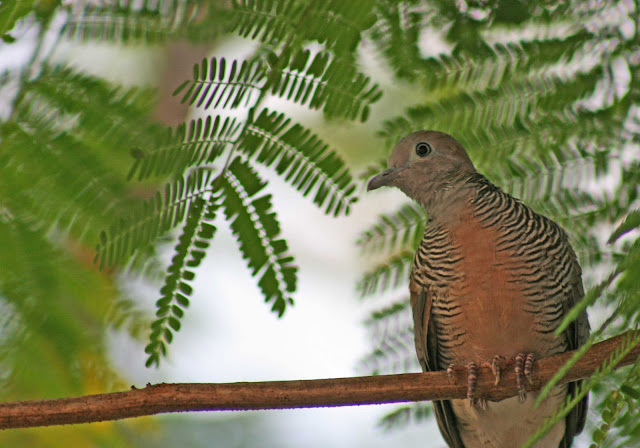 On the opposite end of the size scale is this Zebra Dove (Geopelia striata). It’s not that big, just the largest of my visitors. An alternate name is the Peaceful Dove, which seems apt, as it is often to be seen sitting quietly surveying the scene, usually with its mate, occasionally cooing softly. Although native to southeast Asia, these doves are common in many places further afield (for example, and ) due either to having been deliberately released or to caged birds escaping captivity. 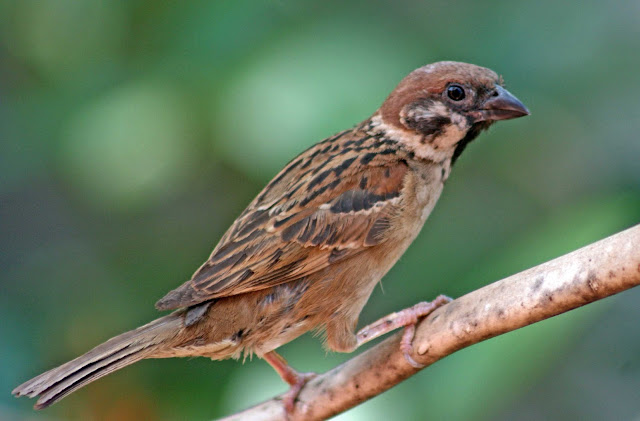 My most common bird visitor – indeed, probably the most common bird in the world – is the humble sparrow. To my untrained eye, these look exactly the same as the sparrows in my home but there are, in fact, 26 species of sparrow, so there may be subtle differences. 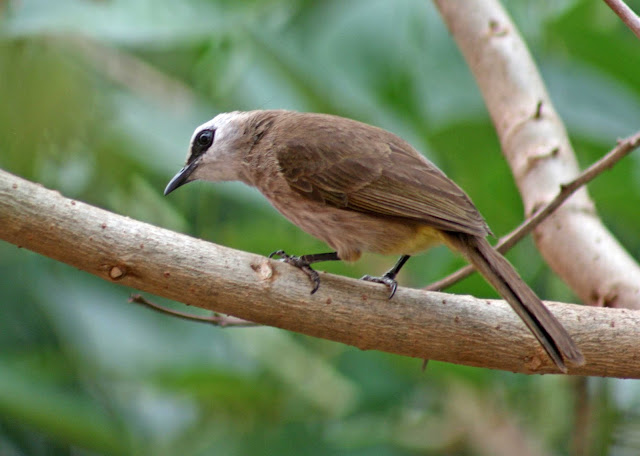 The sweetest singers amongst my feathered friends are the bulbuls, and they come in two varieties. The more common is the Yellow-vented Bulbul (Pycnonotus goiavier), whose range extends throughout southeast Asia, from southern to the and . As well as small berries and fruit, these bulbuls consume both nectar and insects, so are enjoying the feast in my trees. 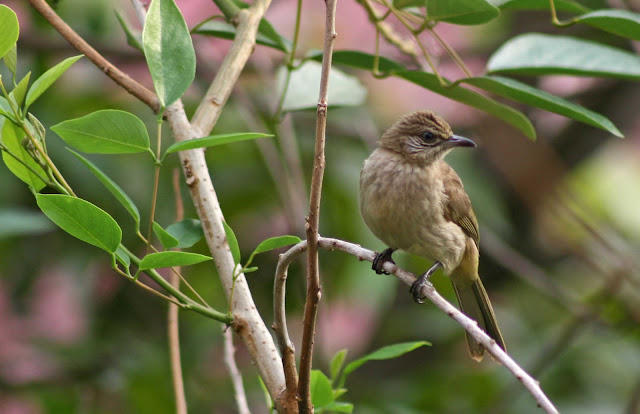 The Yellow-vented’s cousin the Streak-eared Bulbul (Pycnonotus blanford) enjoys the same diet, hence its frequent visits to the garden. Wikipedia reports that its natural habitat is tropical and subtropical forest, and implies that it’s not a common sight, so I feel privileged that they come often to my trees. 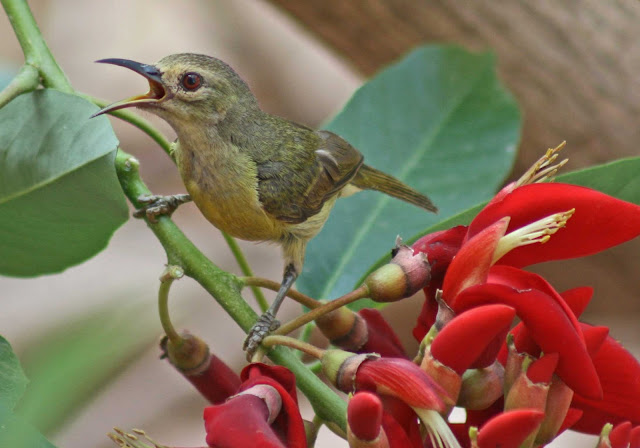 I’ve left the best till last – or, at least, the most colourful. First, meet Mrs Brown-throated Sunbird (Anthreptes malacensis) who, like most birds, is not as flamboyant as her husband, though I think her olive-green back and yellowish tummy are still pretty. These little birds are nectar lovers so are very frequent visitors to the Coral tree’s flowers. 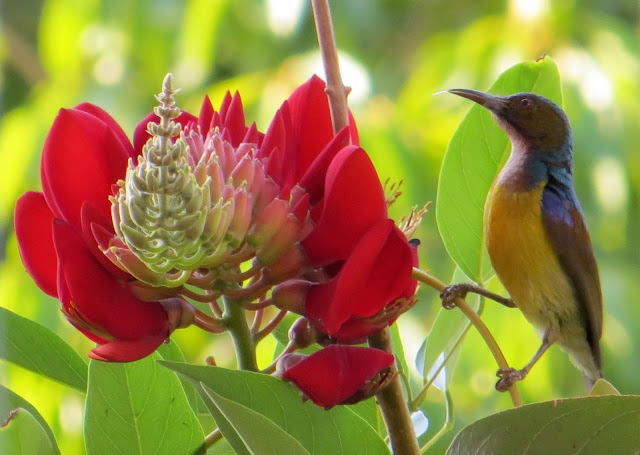 Here’s the husband, Mr Brown-throated Sunbird! He warrants two photos to show off both his iridescent upper body and his prettily coloured underparts. The sunbirds appear to have very long tongues, and you can see a little of his poking out in both these pictures. While the female will stay still for slightly longer, so I’ve managed to get a few good pictures of her, the male is very skittish, so getting sharp photos is more difficult. It is such a joy to watch his beautiful colours flitting from flower to flower.

Thanks to Wikipedia for the information about these birds, and to Lisa Arensen and members of the Oriental Bird Club for help identifying the birds. 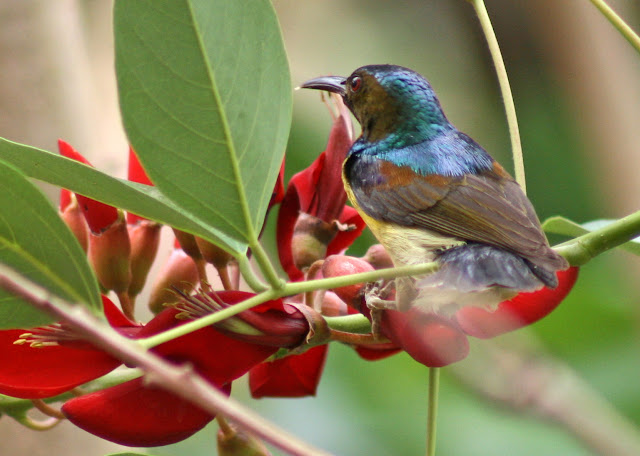