I’ve only twice seen live bands actually playing in bandstands but both times have been memorable experiences and I find the structures themselves quite fascinating.

Whole books have been written about the history of bandstands (and you can read a brief extract from one of those on the author’s website here) so I won’t go into too much detail. Suffice to say that the first British bandstands were constructed in the Royal Horticultural Society Gardens in London’s South Kensington in 1861. In the essay 'Garden of the Royal Horticultural Society', in Survey of London: Volume 38, South Kensington Museums Area, (ed. F H W Sheppard, London, 1975, which can be accessed at British History Online), the author reports that

[engineer and architect Francis] Fowke also designed the two 'band houses' of iron and zinc-covered wood which The Builder thought 'light and tasteful' ... The ironwork was by J. Potter and Company. One bandstand survives on Clapham Common where it was re-erected in 1890.

However, it seems that last statement about the bandstand having been moved to Clapham Common is incorrect, as Hazel Conway has since discovered that the two original bandstands went to other locations (and have since been demolished) and the Clapham Common bandstand is, in fact, an 1890 replica.

As urban living conditions deteriorated during the industrial revolution and the music of brass bands became more popular, town councils began building bandstands, and other leisure facilities, in the public parks that were then being developed, so that over-worked, stressed factory workers had somewhere to escape their grim, over-crowded living conditions and enjoy a little rest and relaxation while listening to sometimes soothing, occasionally stirring brass band music. 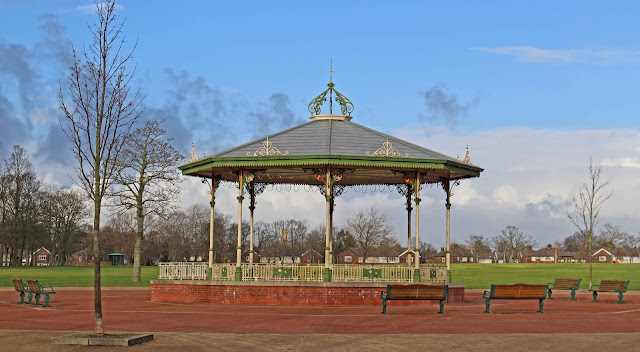 I don’t have any photos of the earlier bandstands but this one in Victoria Park, Widnes, though actually a modern replica of the original, is typical of many that were constructed in the late Victorian era. It was one of the park’s major features when it opened in 1900, to celebrate Queen Victoria’s Diamond Jubilee.

Bandstands were also popular in New Zealand, my home country, though for some unknown reason we call them band rotundas. According to the Digital NZ website, ‘popular enthusiasm for brass band music led to over 100 rotundas being built from the 1890s to the 1930s’, and the website has wonderful old photos of some of them.

One that’s featured is the band rotunda in The Domain, a huge park in central Auckland. It was built in 1912 and still hosts occasional concerts during the summer months. (My photos were taken in September and December 2013, when I had returned to live in Auckland for a time.) 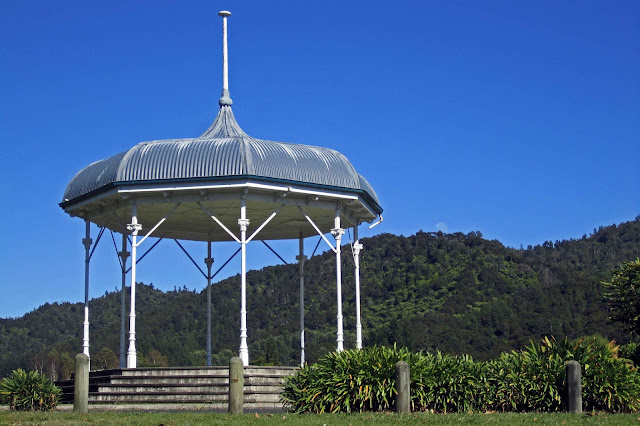 Even the humble little town of Ngaruawahia, my home town in New Zealand, has a band rotunda. It sits in a dramatic position, at the confluence of the Waipa and Waikato Rivers, in a park which, in my childhood, was used for fairs and circuses and an annual gathering we called ‘The Regatta’, when the green was filled with carnival attractions, there were Maori canoe races on the adjacent river, and brass bands played stirring tunes from the rotunda (though I don’t remember the bands as much as the sideshows and merry-go-rounds!).

Getting back to what I wrote at the beginning of this post about my memorable experiences of hearing live bandstand performances, the first was on a visit to Chester in July 2014. My friend Sarah and I had tickets to see a performance of Macbeth at the open-air circular theatre in Grosvenor Park (it was fantastic!) so we were spending the day in Chester, walking the Roman walls, exploring the historic city. As the time for the play approached, we decided to walk to the venue along the riverside paths and almost immediately heard the music. Luckily, we had time to grab an icecream from a nearby vendor and sit and enjoy the music, before going on to see the play. 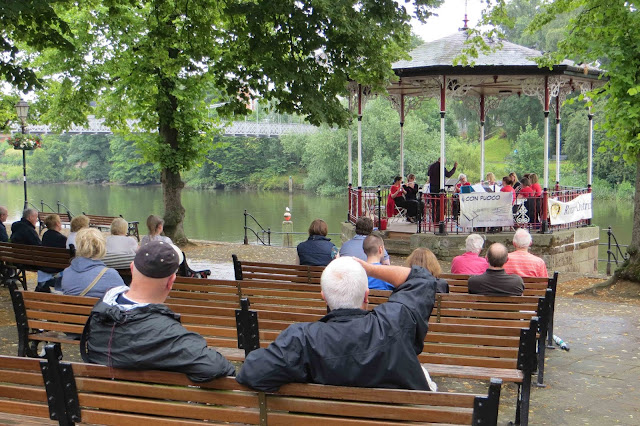 That bandstand was first built, in its lovely riverside setting, in 1913, it’s now a Grade II-listed structure, and it underwent a full restoration in early 2018. It is used extensively throughout the summer months for free concerts by brass and jazz bands, as well as performers of other musical genres.

My second memorable bandstand experience was in the seaside town of Eastbourne, on England’s south coast, while visiting my friend Jill in August 2014. Eastbourne Bandstand, which bills itself as ‘The Busiest Bandstand on Planet Earth (unless you know better)’, is a unique structure and very different to the other bandstands described here. Built in 1935, its three levels can seat up to 1400 people, and it hosts a huge number and range of musical performances which, like the one we attended, often end literally with a bang – we went to one of their ‘1812 Fireworks and Proms’ concerts, which concluded with an orchestral performance of Tchaikovsky’s 1812 Overture and a spectacular fireworks display. It was truly a night to remember!

Here in Wales, there are a number of bandstands in the towns and cities near where I live, so I’ll be featuring those in some of my future blogs.