Last week, I found this wonderful contrast between mileposts old and new when I walked down the woodland trail from Parc Slip Nature to Tondu railway station. 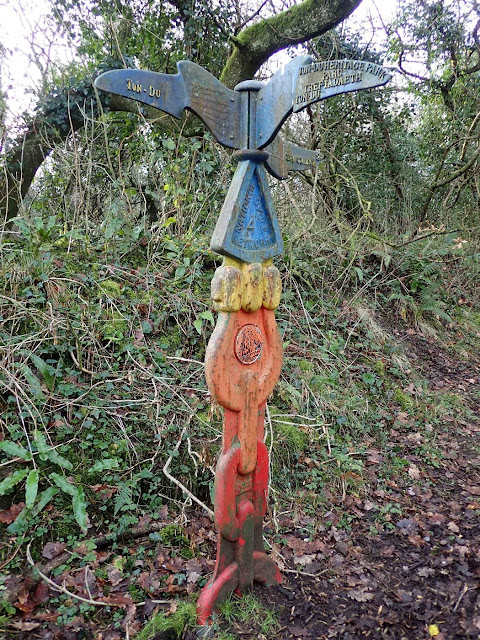 Almost at the bottom of the trail, at the junction of the turn in to the Tondu Heritage Park, I found this once bright, now rather grubby modern post. It’s one of the markers for the National Cycle Network, route number four.

A thousand of these cast-iron markers were installed to celebrate the turn of the millennium and to mark the creation of the National Cycle Network. They come in four different types: the ‘Fossil tree’ design by John Mills, ‘The Cockerel’ by Iain McColl, ‘Tracks’ by David Dudgeon and the one pictured here, the ‘Rowe type’ by Andrew Rowe.

However, I doubt many cyclists use this route, particularly as the long boardwalk, further up the hill towards Parc Slip, has several broken boards and could potentially be rather dangerous for anyone cycling over it, as it also could for walkers who aren’t watching carefully where they’re going. 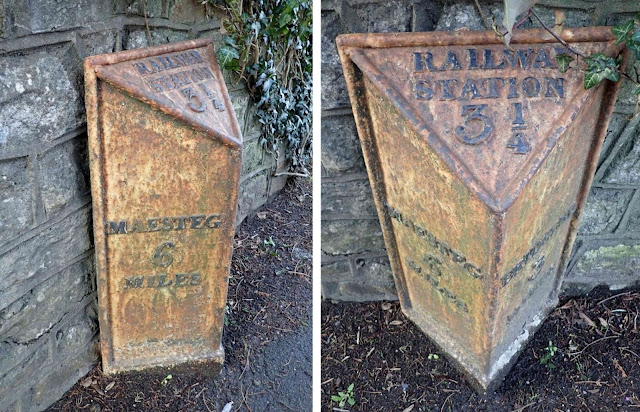 At the bottom of the path, where it meets the main road, and I turned right to walk around the roads to reach the railway station, I almost immediately found this much older milepost. Sadly, this is also looking rather neglected and obviously hasn’t had a clean or a lick of paint in many years.

You can see that this milepost gives the distance to the railway station as 3¼ miles but that’s certainly not the distance to the Tondu station – it must be less than a kilometre and that by a rather higgledy-piggledy route. I presume the post was installed prior to that particular station being built and I’m not sure which station the distance refers to.

I’ve written about these mileposts before, after finding several still surviving in the streets of Cardiff (you can see and read about those mileposts in this blog from November 2015). Let’s hope both these mileposts in Tondu get some of the care and attention they require and deserve before their condition deteriorates any further.