‘Anyone with a feel for our industrial heritage will experience a tingle in the soles of his feet throughout this walk’ writes author Gordon Hindess in his informative little book Family Walks around Cardiff and the Valleys (Scarthin Books, Cromford, 1992, p.57). As I am lucky enough to be out walking with the man himself, and his lovely wife Liz, I don’t have to settle for a feet-tingling experience – I am treated to a running commentary of interesting facts and figures about the route we are walking, much of which I would otherwise have missed.

We start and end our 4-mile walk in the tiny ’s Yard, which takes its name from the 17th century Friends' burial ground by the main crossroads in the village. It’s a simple stone-walled enclosure, easily missed if you don’t know what to look for, particularly because, traditionally, Quakers don’t mark their graves with headstones. 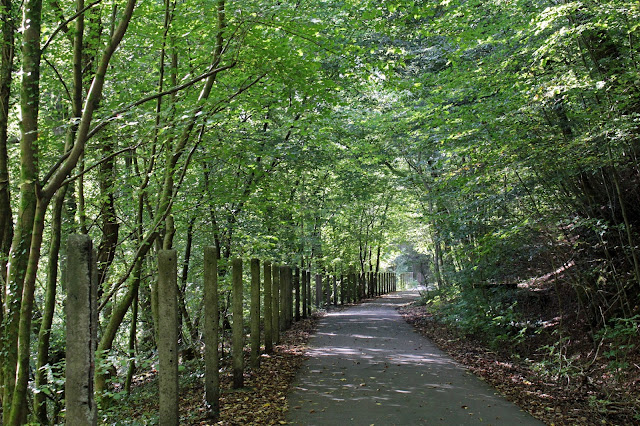 Our route along the former Penydarren tramroad is green and leafy, with the River Taff babbling pleasantly below us. As Gordon tells me, this tramroad is where the very first steam locomotive to run on rails first hauled its load of iron ore and passengers from Merthyr to Abercynon way back in 1804. Though the tramroad has been closed for over a century, you can still see the rail support stones in some places. Regular holes in the stones and their positioning in a straight line along our trail are the tell-tale signs of the tramway. 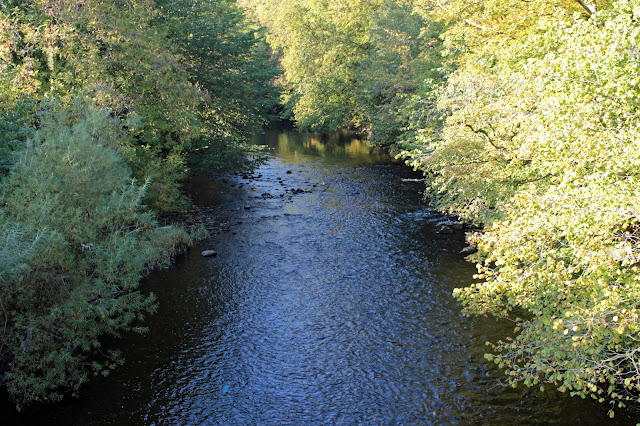 We cross the Taff over a high bridge and then almost immediately pass under the dizzying 90-foot-high spans of the Goitre Coed viaduct, an impressive feat of engineering that has been carrying Taff Vale Railway traffic across the river here since April 1841. It comes as no surprise that this towering construction was designed by that master of railway engineering Isambard Kingdom Brunel.

Further along the trail we pass what’s left of two more lofty viaducts, their enormous stone supports now almost disappeared beneath smothering vegetation. At home, later, I find on the internet some old photos of these soaring structures, including one of demolition day on Alan George’s website – what a sight that would have been! 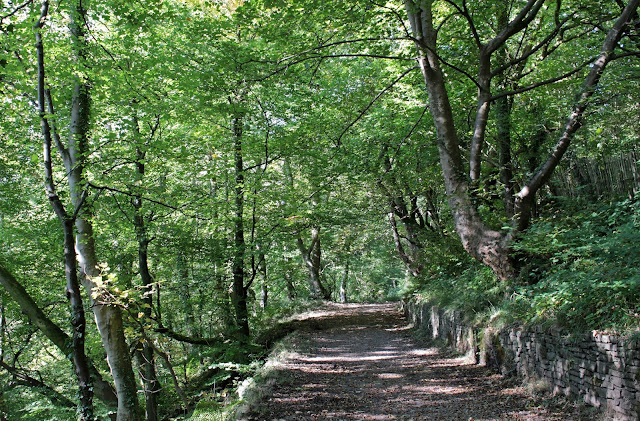 Before re-crossing the Taff, we stop at a perfectly sited farmhouse, offering tea and cake – help yourself and leave a donation! – where I also make friends with a cute kitten sunning itself on a chair and, not to be left out, a handsome horse poking his head over the stable door. 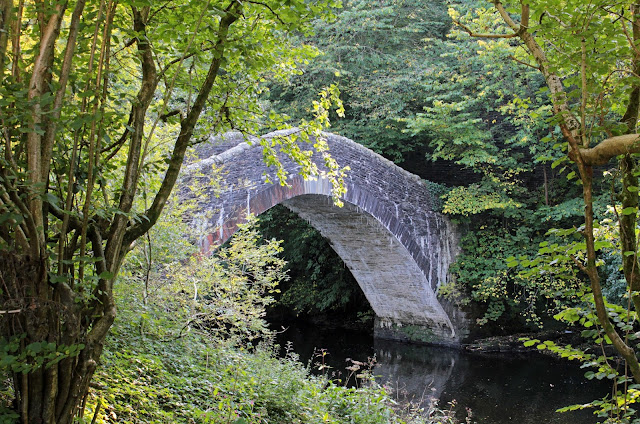 Refreshed and recharged, we cross the Taff by the charming Pont-Y-Gwaith, a steeply arched stone bridge, built in 1811 to the design of architect William Edwards, to replace a wooden bridge which was associated with the nearby 16th-century ironworks (Gwaith is Welsh for works). Gordon spoiled my romantic illusion of this delightful place just a little by telling me that, when the bridge was repaired by the Mid Glamorgan County Council in 1993, it was rebuilt in reinforced concrete, then re-clad with the old stones from the original bridge. Still, it looks authentic, and at least it should be around for many generations of walkers to enjoy.

A modern subway takes us under the busy A470, then we turn left, passing over what remains of the . For a hundred years after its opening in 1794, this canal served the Cyfartha ironworks in Merthyr. Now, it’s merely a weed-filled hollow, barely discernible as a former waterway. 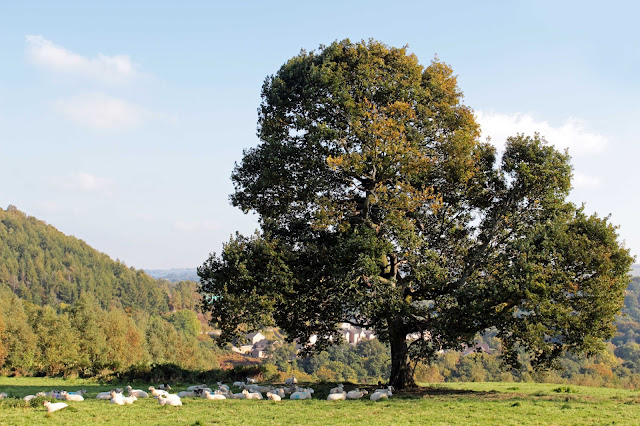 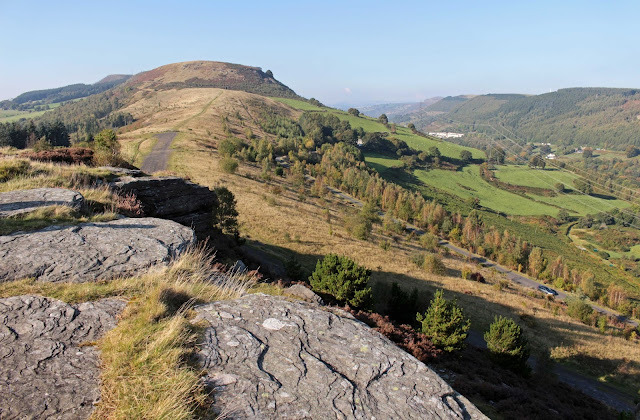 Rather than follow the track by the canal or the single-lane road back to the car, we veer off to the right and climb steadily upwards on to the mountain ridge of Daren y Celyn. The ascent is well worth it as we are rewarded with breath-taking panoramic views in every direction. The coal-bearing hills roll away on all sides, rows of terrace houses hug the hillsides in the valley villages below, the blades of a wind turbine can just be seen revolving steadily beyond a neighbouring ridge top, and one distant hillside is almost completely covered in solar panels. The landscape tells a tale of industrial history, from the long-gone days of the underground coal mining pits to the modern methods of energy-production. 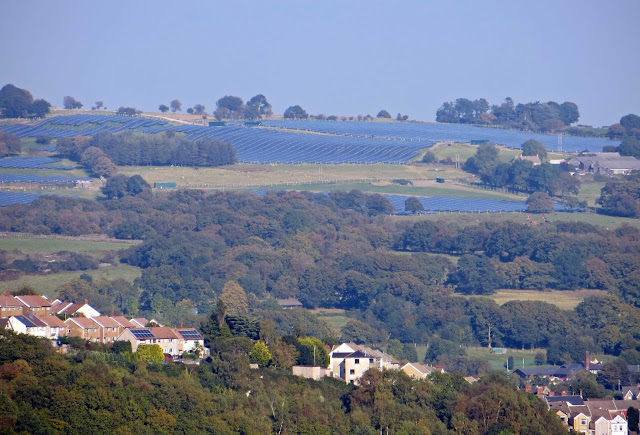 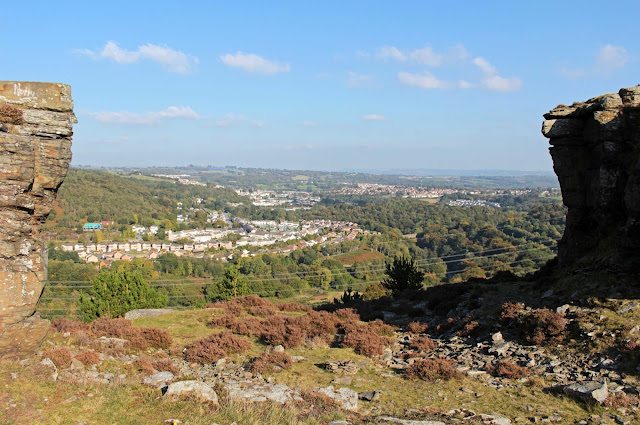 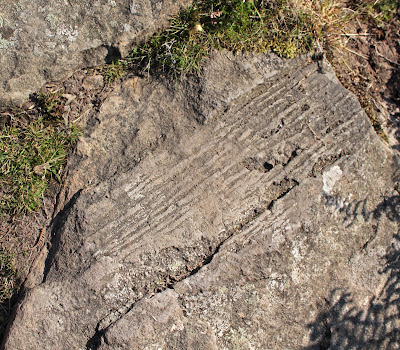 Continuing along the ridgeway, we scramble up the boulders and around a large gap on the summit of Daren y Celyn, the former quarry that once supplied the stone for the railway viaducts, now known to the locals as the ‘Giant’s Bite’. If you know what to look for – and Gordon does – you can see the remains of fossilised trees in the stones here.

Having soaked in the views and enjoyed the cooling breeze, we head down the side of the mountain, forcing our way through the thick bracken that almost blocks the track, before joining the country lane that leads us back to Quaker’s Yard.

We have had a fascinating journey through the industrial heritage of this area, a heritage representative of many of the coal-mining valleys of , and a thoroughly enjoyable walk to boot. My sincere thanks to Gordon and Liz, for sharing their knowledge and for their good company.
Posted by sconzani at 21:08