Exploring the parks of downtown Chicago

Though I absolutely loved my Chicago river cruise, for me, the best way to explore a is on foot. Well, I am the Solitary Strider after all!

So, after getting the train down from , then a taxi to my hotel, I donned my walking shoes and headed north, to nearby . What a lovely oasis of green and tranquillity on the edge of always bustling downtown ! 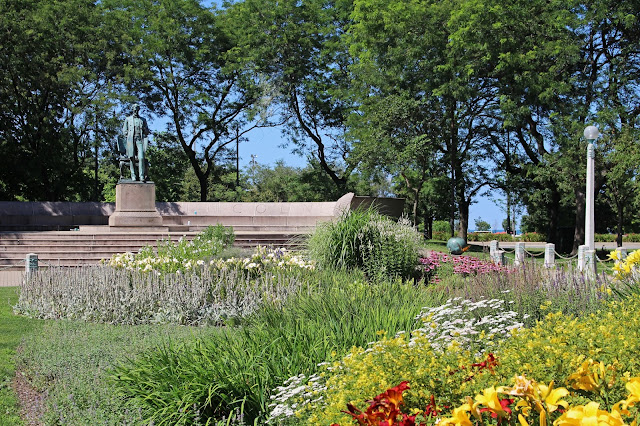 Named, as you might guess after the sixteenth president of the , Abraham Lincoln, the park stretches for many miles on the shores of . As well as a statue to the great man and another of General Ulysses S Grant, the park is home to the wild creatures of Lincoln Park Zoo and extensive wildflower meadows, the Lincoln Park Conservatory and the Peggy Notebaert Nature Museum, several large ponds and a rowing canal, the Chicago History Museum and the Lincoln Park Cultural Center, to name just a few of its attractions. 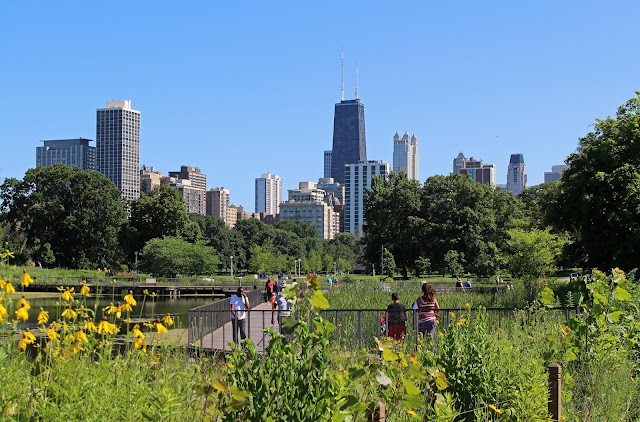 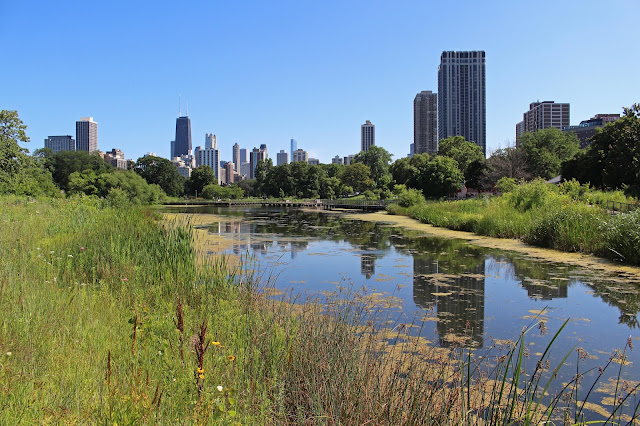 You could happily spend several days just in this one park. I spent that first delightful afternoon wandering its paths and trails, and then the next morning met a photographer friend there for a longer photo-meander and lunch.

That first day I returned to my hotel via the Lakefront Trail that runs along the edge of the city beaches, and is hugely popular with bikers and walkers alike. I hadn’t done any research on Chicago before my visit – sometimes I just like a city to surprise me – so I hadn’t realised there would be such wide sandy beaches on the lake edge so close to the downtown area and, as the weather during my visit was wonderfully sunny and very warm, and it was summer vacation for the local schools and universities, the beaches were thronged with folk swimming, sunbathing, kayaking, playing volleyball, and just generally chilling.

Much of my last day in was spent wandering around , south of the downtown area and another huge area of gardens, sculptures and the incredible Art Institute of Chicago.

Walking down from the city, the first area of the park you encounter is the tree-lined and the classical-inspired semi-circle of Doric columns that is the . The monument looks old but is, in fact, a replica of an earlier peristyle that stood in this location from 1917 to 1953. 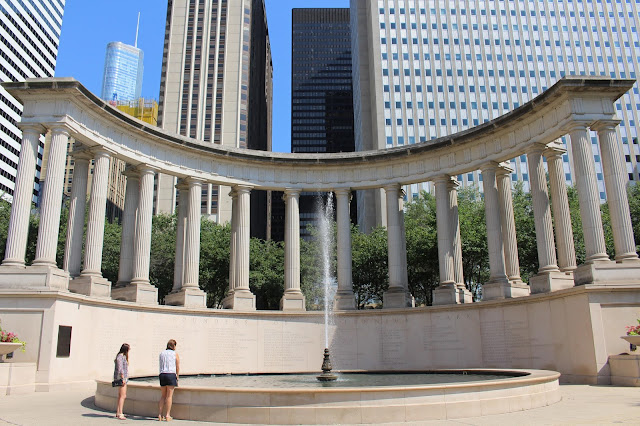 Almost everyone will recognise this next sculpture, I think. It is, of course, the Cloud Gate, or Bean, as it is affectionately known. I had certainly seen many photos of it but images really can’t convey the intrigue or fascination of this structure, the way reflections are so massively distorted and bounced back at the viewer. British artist Anish Kapoor drew his inspiration from liquid mercury but it reminded me of the Hall of Mirrors that used to be a popular fairground attraction, though with even more bizarre reflections. 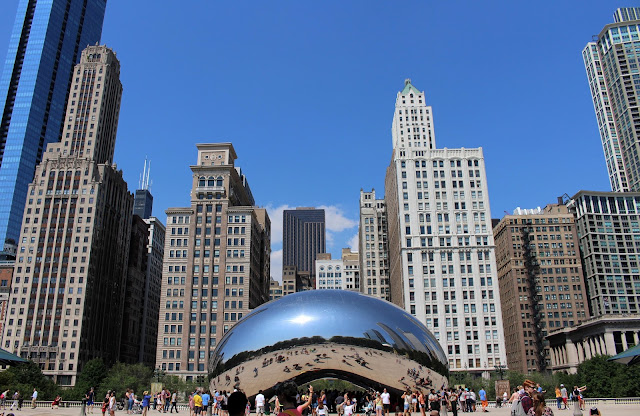 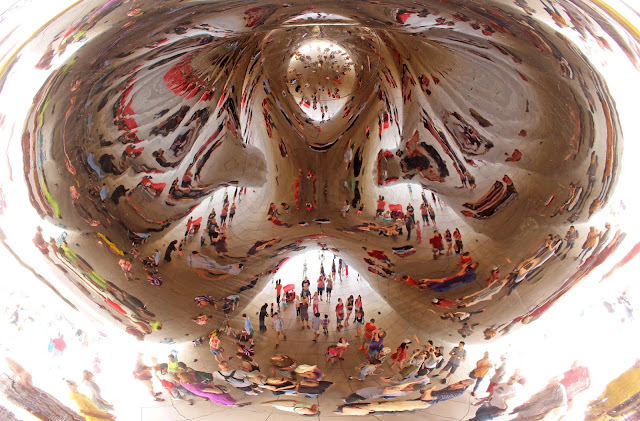 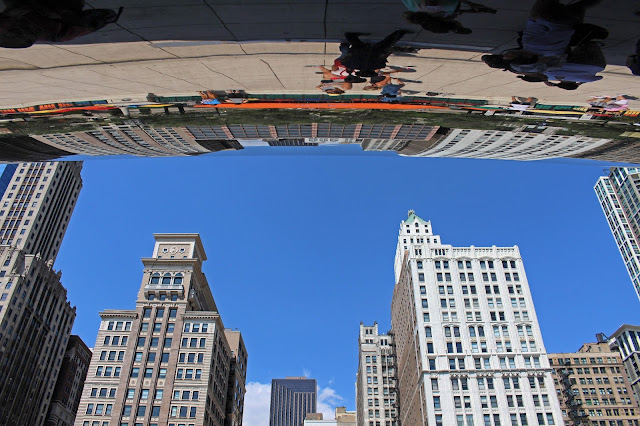 This next architectural marvel is the Jay Pritzker Pavilion. I heard music coming from this direction so went and joined the other folks sitting on the seats near the front. Turns out I was listening to a free rehearsal of Saint Saen's Piano Concerto no. 2 in G minor, with Andrew van Oeyen performing superbly on piano. I sat absolutely entranced for the next 30 minutes. 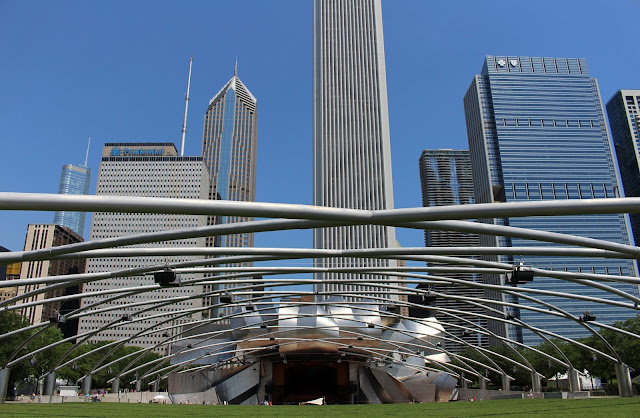 When the rehearsal was over, I found these amazing sculptures by Spanish artist, Jaume Plensa, who had, ten years earlier, created the ‘Crown Fountain’ for (more on than below). The four new pieces, modelled on young girls, are monumental in size and in weight. The set of three, ‘Paula’, ‘Laura’ and ‘Inez’, are made of cast iron, while ‘Awilda’ gleams in marble and resin.

As it was extremely hot the day I visited, the ‘Crown Fountain’ was proving a great hit with the local kids. The two 50-foot-high glass blocks not only spurt water into a shallow reflecting pool, but they also have images projected on them, images of a cross-section of 1000 Chicago residents who appear to spout water from their mouths. 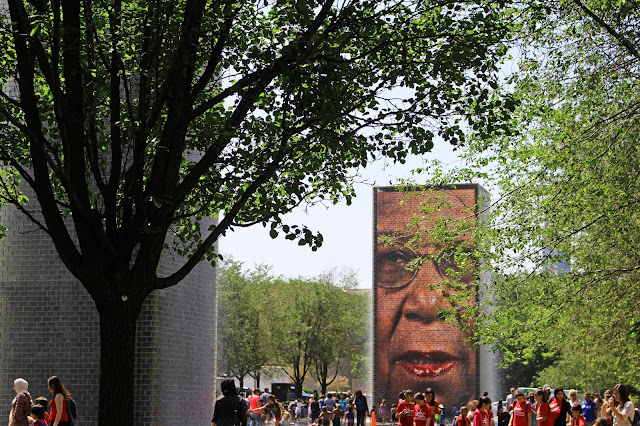 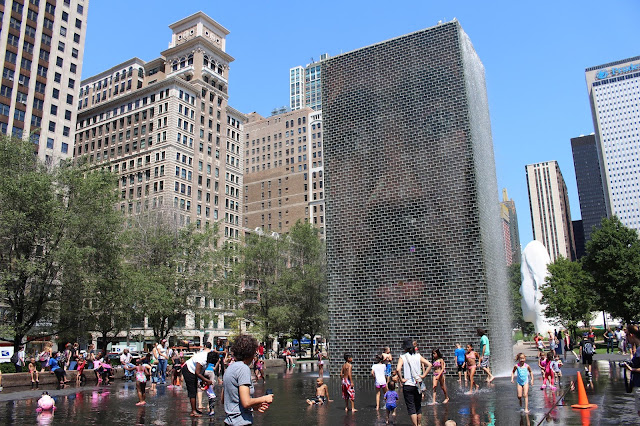 The Buckingham Fountain is an entirely different, totally traditional type of fountain. This elaborate rococo construction dates from 1927 and sits slap bang in the middle of Grant Park which, to me, seemed just to be an extension of . I only saw this beautiful fountain during the daytime but, if you google the name, you’ll see it looks stunning when lit up at night. 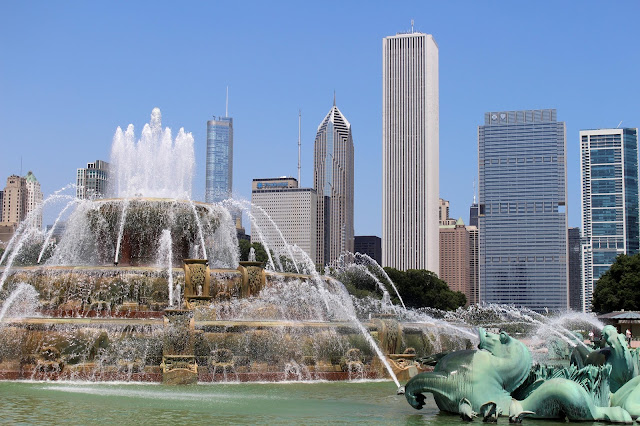 Chicago delighted, amazed, intrigued, charmed and exhausted me! I walked miles and loved every minute of my time there. I will be back!