Auckland architecture: Let there be light

I’m a big fan of the architecture of the Art Deco era, which flourished around the world through the 1920s, ‘30s and ‘40s. There’s something about its combination of bold geometric shapes and exuberant ornamentation, and that blending of ‘Machine Age’ imagery and materials with more traditional craft motifs, that I find pleasing to the eye.

I like to focus on the minutiae of different architectural styles, in this case the lights, lamps and lanterns that adorn some of the ’s Art Deco buildings and, during my wanders around the inner city, I’ve found some fabulous examples. And I’ve included one red herring to finish. 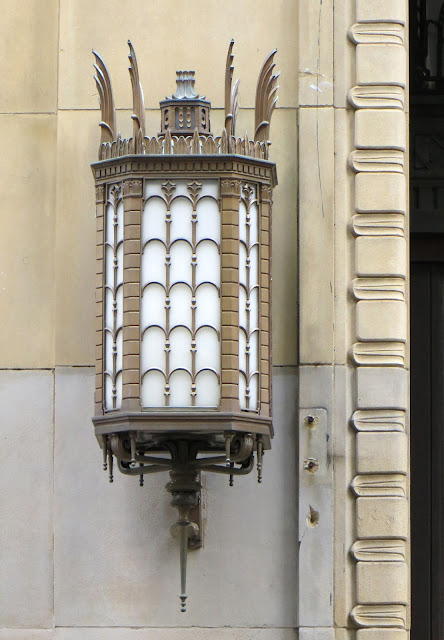 , central
Is this magnificent or what? It's one of a pair, each about a metre tall, that flank the main entrance of the former , built in lower in 1927-28.

Not surprisingly, this is a heritage-listed building, described thus on the Heritage New Zealand website:

… a fine example of a 1920s 'Chicago-style' office block … Such high-rises marked a considerable shift in design and business organisation from the smaller, single-tenancy offices used in the mid to late nineteenth century. … [This] building was one of the tallest structures in , and of self-consciously 'modern' design. … Its interiors include some of the finest Art Deco ornamentation in the city centre, and it makes an important contribution to the urban streetscape. 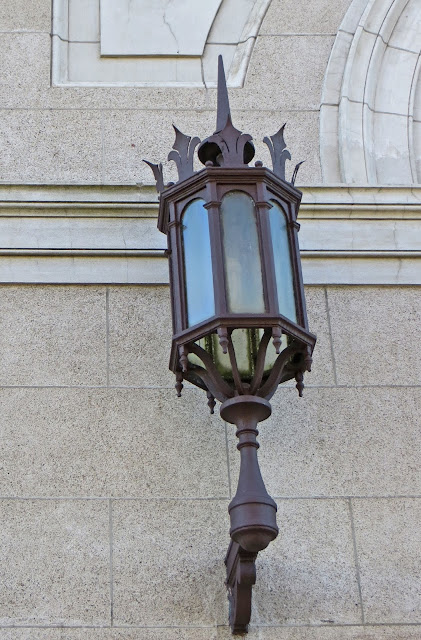 A New Zealander by birth, Malcolm Draffin (1890-1964) completed his architectural apprenticeship in in 1910, served with the NZ Field Engineers in the First World War, then completed additional training at the in .

As well as these two buildings, his design work also included the .

In 1996, Parnell Library was relocated to larger premises in the , and this building was sold into private ownership.

It has subsequently, and very sympathetically, been turned into a private home, with business premises at street level and living accommodation above. 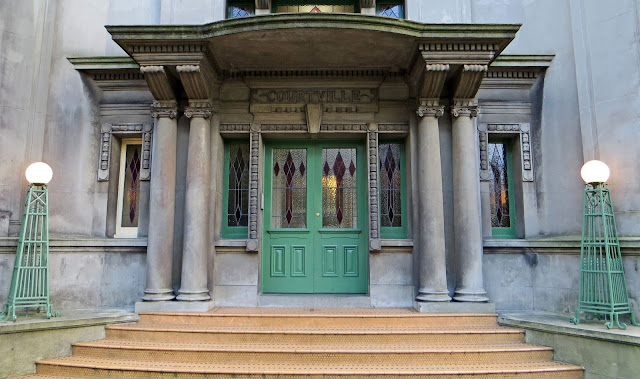 These Art Deco beauties sit either side of the main entrance to the 1919 Courtville apartment block (also known as Corner Courtville because it’s located on the corner of Waterloo Quadrant and , to distinguish it from Middle Courtville, in ).

This building was one of ’s earliest high-rise apartment blocks and, according to the Heritage New Zealand website, ‘shows the influence of the architecture of Louis Sullivan and Frank Lloyd Wright of the ’.

It was one of several inner-city apartment blocks to be designed by Australian Arthur Sinclair O'Connor (c.1884-1943), who came to about 1908. 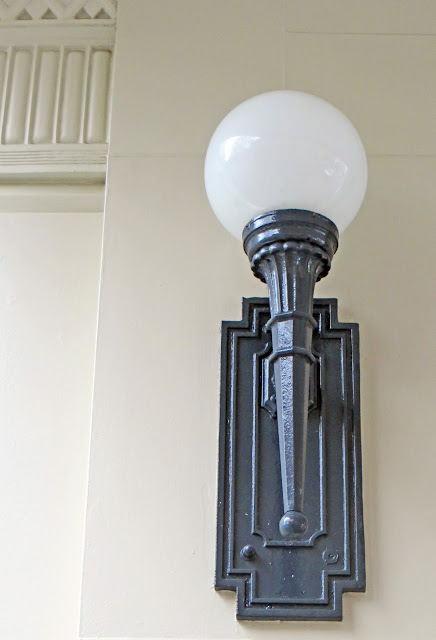 central
Once again we have links between the apartment block this light adorns and the previous one. Not only is just along from Courtville but they were also designed by the same man, though this building is more recent, having been designed by A. Sinclair O’Connor in 1934.

It’s an eight-storey block, originally contained 50 apartments, and is still much sought-after by city dwellers. The building’s facilities include an indoor heated pool, a spa pool and a sauna, a games room and a barbecue area.

As you might have guessed, apartments in this stylish building do not come cheap – here’s a recent sale. 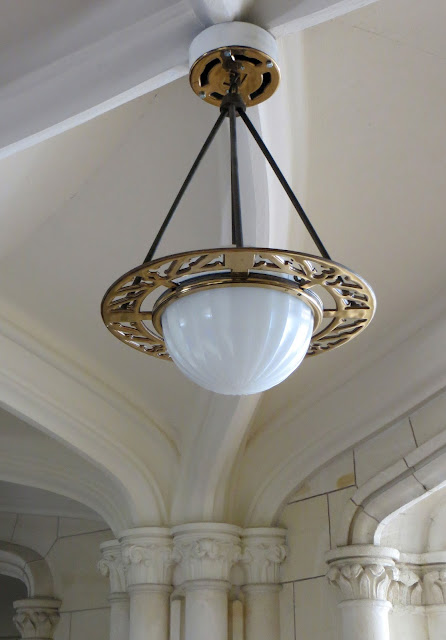 Old Arts or , of , central
Despite its rather flamboyant design, this is one of my favourite buildings and it’s also one of the most recognisable.

Nowadays, the Clock Tower you can see in my photo (above) is symbolic of the University of Auckland but the building was controversial when first built in 1926, being described as ‘un-British and out of harmony with our national character’ – this, obviously, before New Zealand had really developed a character of its own!

Once again we see the influence of style in an building, as it was designed by Chicago-trained architect Roy Lippincott. Considering the rest of the building, the external lights are really very restrained but the internal light (left) has a little more flair.

Grey Lynn Library, Grey Lynn
To another library building now, and this one still functions as a library and is very much the central hub of the Grey Lynn community. Designed by notable architect William Henry Gummer (1885-1966), the library opened on 13 December 1924, it cost £8,534 to construct and included a reading room, a lending department, a lecture hall and a committee room. Although the building itself is described as Georgian-style, those lamps look very Art Deco to me. 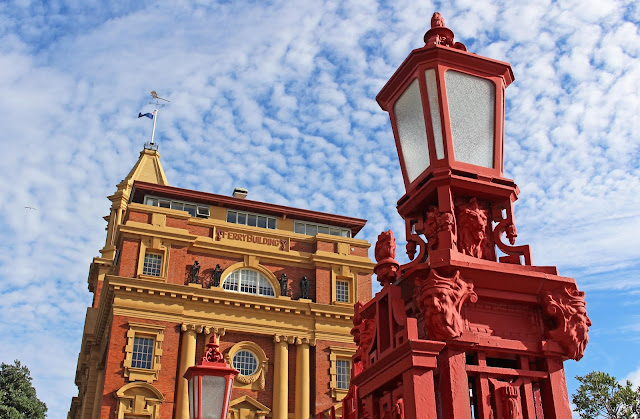 Ports of Red Fence, central
And we finish with that red herring I mentioned: one of the lamps from the magnificent red-painted wrought iron fence that separates ’s wharves from neighbouring . The Red Fence, its wonderfully ornamental gates and lamp stands were constructed in stages between 1913 and 1923, partly by Manchester-based company G. Wragge Ltd, and partly by James Allen Sen & Son Ltd, of Elmbank Foundry, in Glasgow. There were originally 25 of these wonderful lamps – I haven’t counted to see if they all still remain, as some parts of the original fence were removed when modern buildings were constructed on Princes Wharf.

These lamps may be a little early to count as Art Deco but, with those splendid lions and heads (of Neptune / Poseidon?), they are such impressive statements of power, strength and authority that I just had to include them.
Posted by sconzani at 07:06