The flight of the condors

We were up early on the fourth day of our holiday – early enough to see the sunrise on the snow-capped mountains visible from the hotel. It was freezing – literally. I was wearing 4 layers of clothing and was glad I had bought new gloves the previous day. 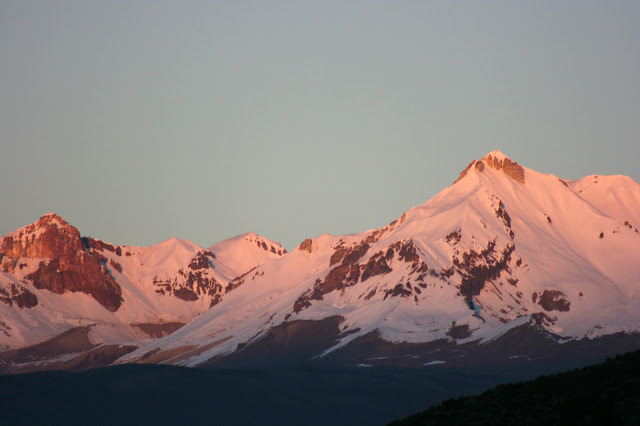 From Choraque, we drove to the little , where some young girls dressed in their colourful traditional costume were dancing around a fountain in the plaza to entertain the tourists and earn themselves some money before heading off to school. We also checked out the quaint local church. 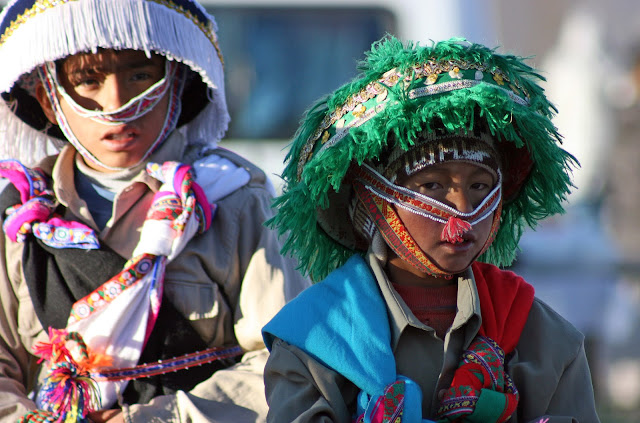 From Maca we headed in to , the deepest canyon in the world, along a gravel road which, at times, had a very steep drop off to one side. Being a wimp when it comes to heights, I was glad I wasn’t sitting on that side of the tour bus! The scenery was impressive though – huge areas of terraces, created by the indigenous people who have lived in this canyon since ancient times, to make farming on a steep slope easier. 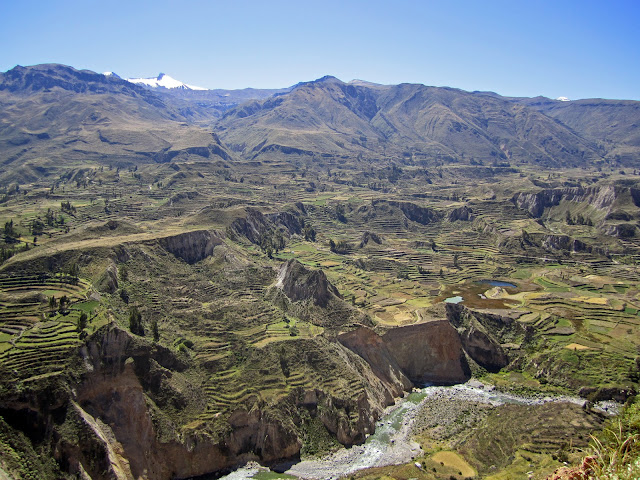 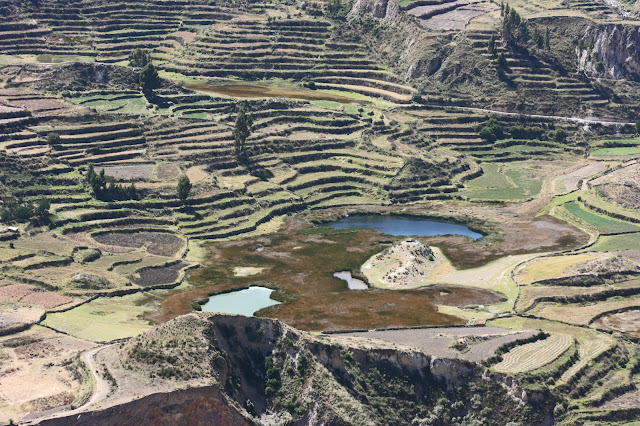 We reached Cruz del Condor, 1000 metres above the canyon floor, at about 8.30 am and scrambled over the rocks of the viewpoint to find a good spot to wait. Condors are big birds, weighing up to 15 kgs and with a wingspan of around 3 metres, so they need the thermals to glide up the canyon each morning, before flying off for up to 250 kms in search of their day’s food – dead animals! 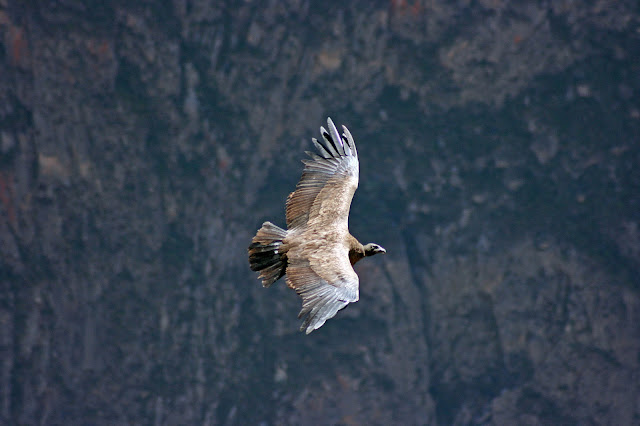 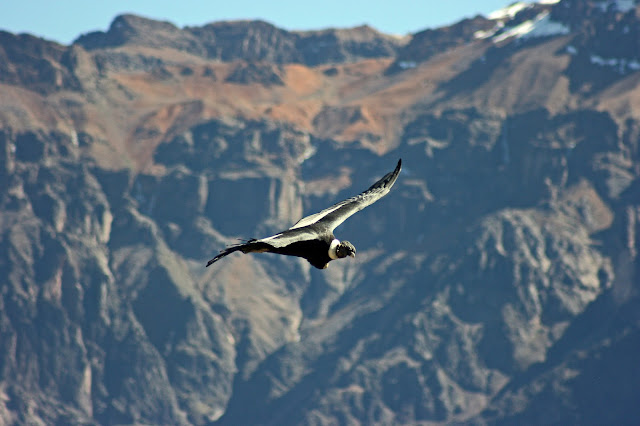 Patience is required – how quickly they come depends on what the weather’s like, when the sun hits the bottom of the canyon, how quickly the air warms up … But, eventually, we saw some small birds a long way below and kept watching until, by 10.30am, they had reached our level and were gliding past us just metres away. 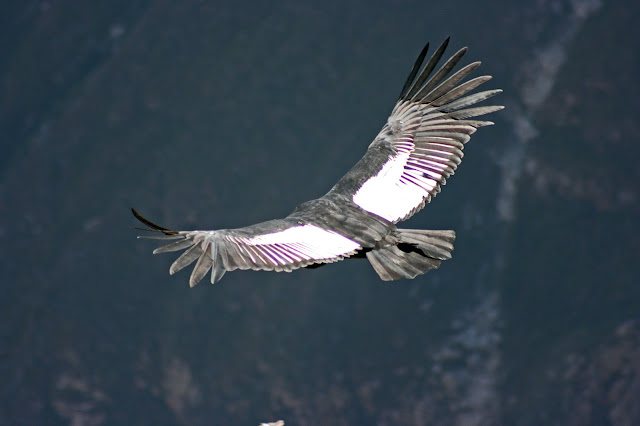 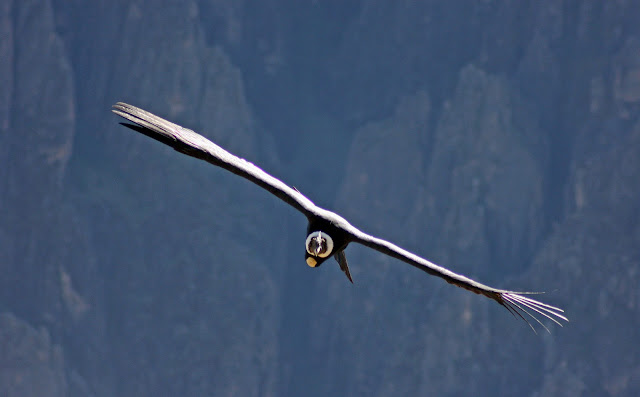 There were several adult birds and two brown-feathered juveniles. The young birds seemed to tire and settled for a while on a rock very close to the canyon edge – a rare treat to have them so close to us. And the whole spectacle was marvellous to watch – I filled up a 2gb memory card with photos but eventually stopped clicking and stood enthralled by the condors’ seemingly effortless flight. One of nature’s miracles! 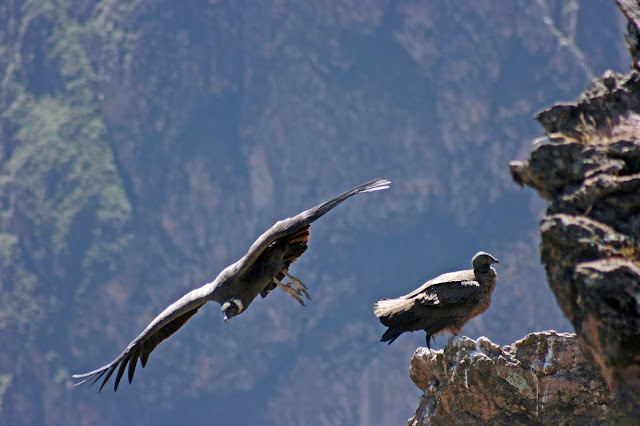 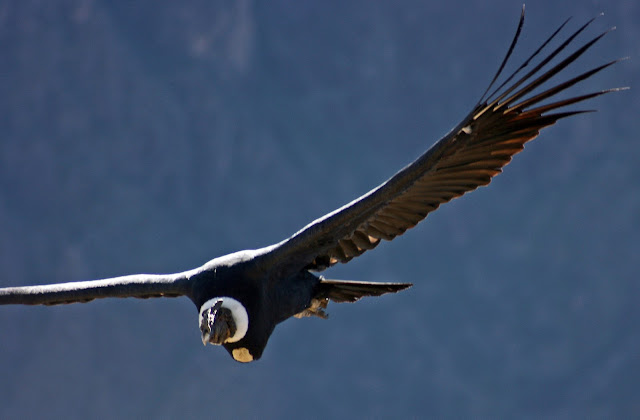 Still buzzing from witnessing such beauty, we headed back to Chivay for a delicious buffet lunch with all sorts of local delicacies, and then it was all aboard our minibus for the 3-hour drive to . The scenery was again spectacular: large herds of llama and smaller groups of vicuña, as well as snow-covered mountains and the three volcanoes which surround . Only one, Misti, is active and at 5300 metres it looms menacingly over ’s second largest city. The inhabitants seem unfazed by its frequent stirrings and earthquakes, even though parts of the city are in the path of potential lava flows. 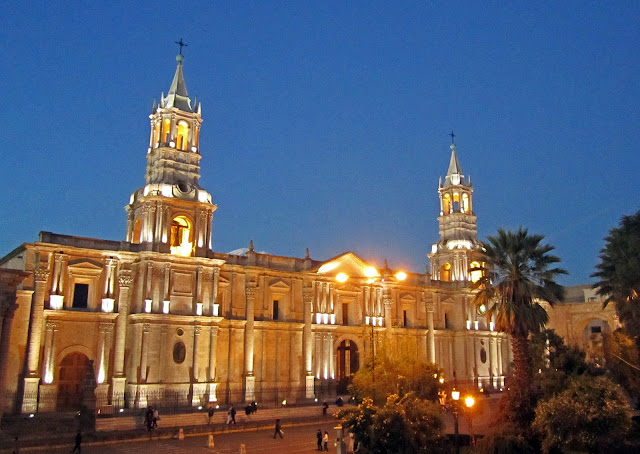 After dropping off our bags at our hotel, Marianne and I headed out to get our bearings before the sun set. The Plaza de Armas was only a few blocks away – close enough to find a first-floor balcony restaurant for beer o’clock while watching the sun set behind the cathedral. But, as soon as the sun had gone down, the air turned chilly so we moved to another restaurant to sample ’s famous freshwater prawns. We wanted another balcony for the view and, luckily, the restaurant had warm ponchos available for the crazy tourists who choose that option. When in … 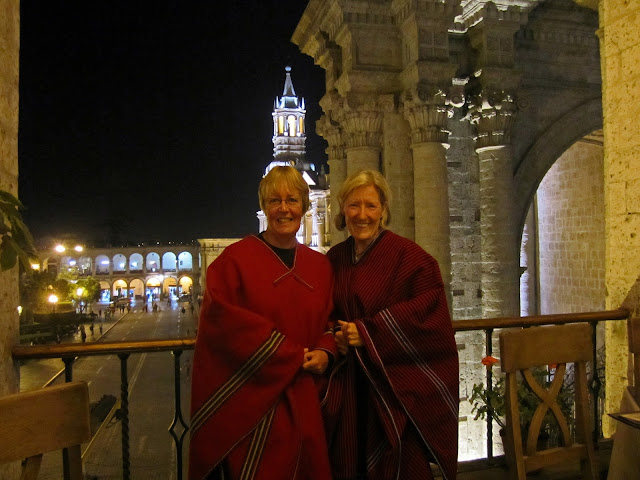