While researching this piece about Cardiff’s two remaining bandstands, I was amused to uncover this newspaper article, from the Cardiff Times 13 August 1904, in which local councillors were reported to be arguing over where the bands should play:

“Wardism."
The Parks Committee's recommendations that for the next week bands should play only at the Roath Park, Victoria Park, and the Llandaff Fields was vigorously contested. Councillor Roberts urged the claims of Splott, and moved that one of the bands play there instead of at Llandaff Fields; whereas Councillor Kidd declared that if any were made Loudoun-square must be considered. Councillor Chappell said the bands were placed at points on the tramway line which had proved most profitable to the tramways. The sum available for bands was now wasted – exhausted rather, because they had been putting bands where they couldn't get audiences. Councillor Beavan thought that other parts of the town would pay the tramways equally well if they were equally treated. Alderman Mildon, having accused previous speakers of “wardism," proceeded to complain that Grangetown was not catered for in any way. He would not ask for a band for Grange, although they had a bandstand there rotting for want of use. Councillor Courtis: Or want of paint. (Laughter.) Alderman Carey proceeded to champion the claims of the people of Tyndall-street. (Renewed laughter.) Councillor Roberts’s amendment was rejected, and the committee’s recommendation adopted.

Sadly, only two of the locations mentioned in this report still have bandstands, Victoria Park and Grange Park, and, perhaps even more sadly, the Grange Park one is still/again ‘rotting for want of use’ and/or ‘want of paint’. So, let’s start with it ... 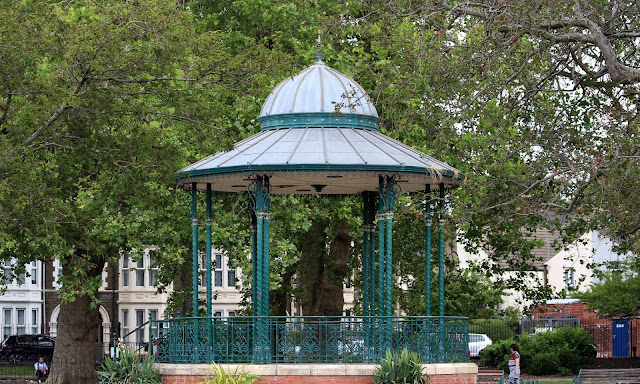 According to the Cardiff Parks website, the Grange Park bandstand was Cardiff’s first:

In February 1895 the Council accepted a tender of £100 from the Lion Foundry Co. of Glasgow, for construction of a bandstand. This, the first bandstand to be provided in any of Cardiff's parks, was completed by [the] beginning of June.

The park, then called Grange Gardens, was formally opened on 19 June 1895 and the bandstand hosted its first musical performance that evening. The South Wales Daily News of 20 June 1895 has the story:

The latest addition to the open spaces of Cardiff—that of Grangetown—was formally declared free and open to the public on Wednesday evening, the ceremony being performed by the Deputy-chairman of the Parks Committee of the Cardiff Corporation (Councillor Joseph Ramsdale, J.P.). The members of the committee with their friends assembled at the Town Hall, from whence they were conveyed in carriages to Grangetown ... The borough engineer presented Councillor Ramsdale with a key, with which he unlocked the gates. The party afterwards proceeded to the band stand, where congratulatory speeches were delivered. The Mayor proposed a vote of thanks to Lord Windsor and Lord Bute for the gift of the ground, and Alderman Jacobs having seconded, and support coming from Councillor Jenkins and Councillor Johnson, the vote was carried amidst much cheering ... [more speeches and cheering] and the party then returned to the Town Hall, leaving Mr D. A. Burn's Brass Band to render a popular programme of music. 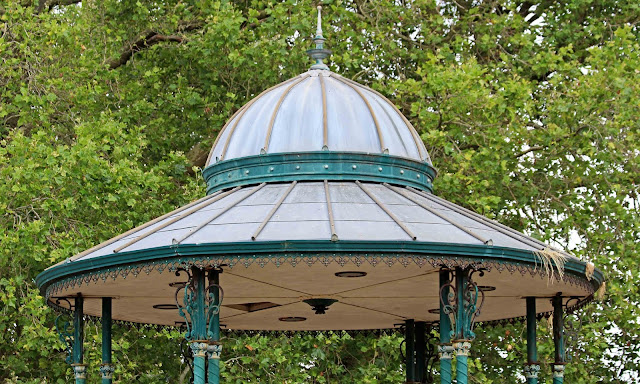 Though you could be forgiven for thinking that the bandstand we see today is the original, it is, in fact, an exact replica (the original plans were uncovered in a library in Glasgow) that was installed in 2000. The Cardiff Parks website reports that

The original bandstand is thought to have been removed during the Second World War, though the Parks Committee received a report in 1937 on the condition of the Grange Gardens bandstand and the question of repair or demolition was left to the Chairman and the Chief Officer. Aerial photographs from 1942 appear to show an empty space where the bandstand stood.
From the summer of 1943 music for open air dancing was provided using gramophone records and loud speakers. Also in 1943 the Parks Committee decided that the Roath Park bandstand, which had fallen into disuse, should be removed and re-erected in Grange Gardens. There is no evidence that this was carried out.

Let’s hail a carriage and move on to Victoria Park's bandstand ... 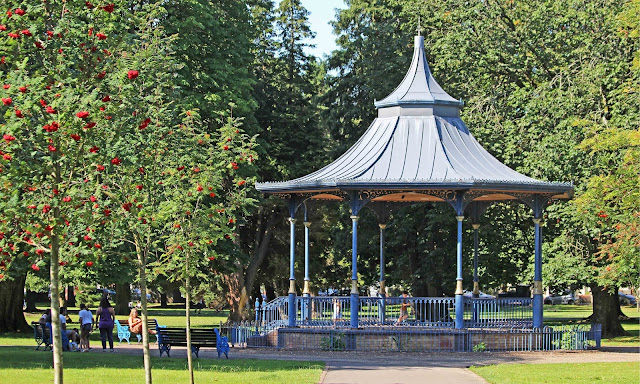 It took Cardiff Council several years first to agree to and then to achieve the transformation of ‘the swampy ground known as Ely Common’ (Weekly Mail, 19 June 1897) to the 45-acre park initially referred to as Canton Park but later christened Victoria in honour of the queen’s jubilee. It was officially opened on 16 June 1897, with its magnificent bandstand already in place. The construction of a bandstand had been already been agreed by the Parks Committee, as reported by the Evening Express, 14 April 1897:

CANTON PARK. A BAND-STAND TO BE ERECTED AT ONCE. The Parks Committee showed on Wednesday [14 April] that they are not devoting their whole attention to the magnificent park at Roath. The claims of Canton, which have been persistently advocated by Messrs. Gerhold, Ward, and Illtyd Thomas, have been recognised, and the parks committee on Wednesday decided to erect a band-stand at Canton Park at a cost of £212.

Here’s an extract from the Weekly Mail’s report, of 19 June 1897, about the new park’s opening:

DESCRIPTION OF THE PARK.
The Victoria Park ... is irregular in shape, and for this reason perhaps lends itself to a lay-out which is both ingenious and attractive. The main paths are 30ft. wide, and from these branch out others, of smaller width, to the band stand, the lake, and other portions of the park. Entering from Cowbridge-road, one becomes at once interested in a very fine series of flower beds, with paths intersecting in the form of a wheel. A little further on is an ornamental lake of about an acre in extent, which is supplied with water from the corporation mains by two very handsome fountains and is approached from about a dozen different directions. Further north is a band stand, surrounded by a gravel footpath 30 ft wide, from which other paths radiate and communicate with the main roads. There are also a couple of ornamental shelters and a drinking fountain. A large number of shrubs and flowers have been planted, and already give proof that they like their new situation. About two acres are set apart at the northern end of the park as a playground .... It is satisfactory to find that the work (except the iron railings and band-stand) has been carried out by corporation employees, under the borough engineer (Mr. W. Harpur) and Mr. Pettigrew (superintendent gardener). 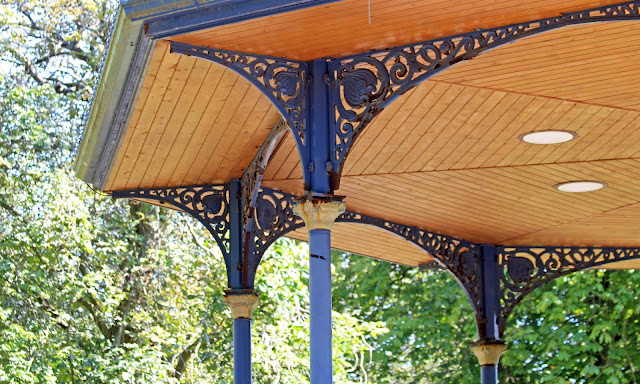 As in other Cardiff parks, there were regular band performances in Victoria Park on summer evenings. These were organised and paid for by the Council Parks Committee, which allocated £500 for musical entertainments in the City's parks. In January 1913 Pettigrew reported that the season for band performances was from May to August and the majority took place in Roath Park, with performances in other parks only during June and July, and on specific days of the week. In Victoria Park this was every Thursday evening. Pettigrew also stated that "at Roath Park only the very best class of (local) bands are engaged; whereas at Splott and Victoria Parks a few second rate bands are sandwiched in between those of a better class." 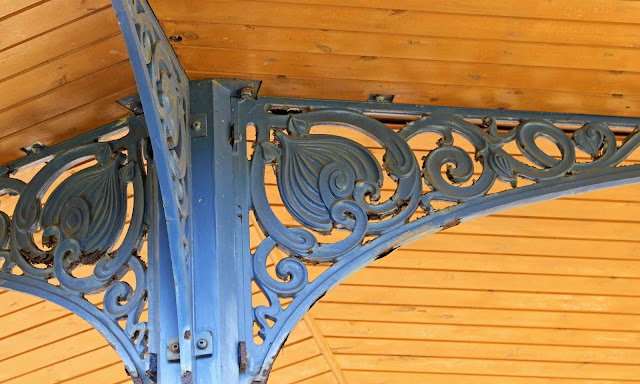 As time passed and fashions changed, the Victoria Park bandstand was less used and less well maintained, and it was eventually dismantled and removed some time in the 1950s. Fortunately, for the park’s centenary in 1997, the replica we see today was commissioned and installed. Let’s hope the city’s future councillors will value and treasure these wonderful nods to a bygone age of leisure and entertainment - both structures could certainly do with a little timely maintenance!