From Boxgrove Priory (see previous post), Jill and I headed north to find the building we’d really travelled across the county to see that day, Halnaker Windmill – we have a bit of a thing about windmills and this was one we’d been planning to visit for perhaps a year! 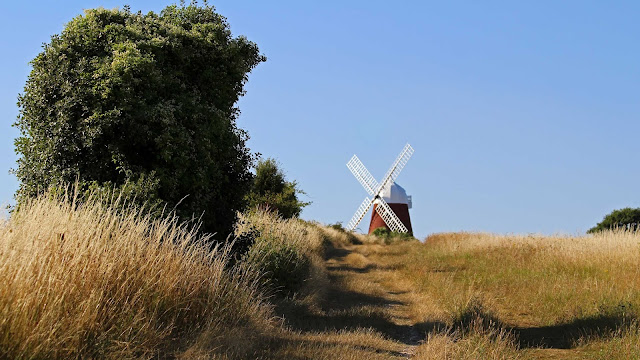 This was a Saturday so the roads were busy, in part due to a local event called ‘The Festival of Speed’ – not something we knew anything about, but we assumed that was why the first lay-by where we were hoping to park was full and so we carried on to the second. From there, we followed a public footpath alongside fields tall with golden cereal crops and, somewhat surprisingly, the symmetrical rows of grapevines. The footpath was ancient, part of the old of , which once carried legions, traders and assorted travellers from to , just a few miles further south. Truth be known, this was probably an even more ancient path as many Roman Roads follow much older trackways where people have walked for thousands of years. 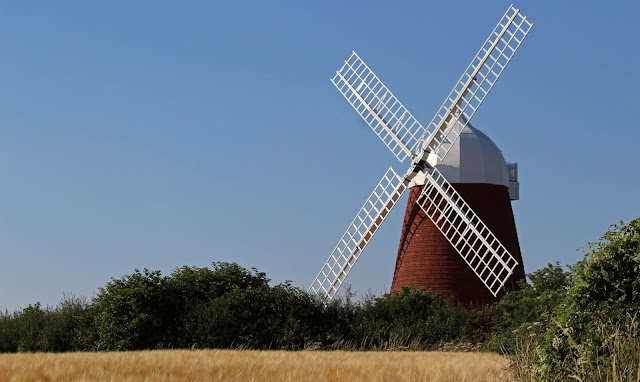 We could tell no Romans had walked this way for a while as the path was quite overgrown with brambles and bracken in parts, and we emerged at the other end with a few scratches for our trouble, but it was worth it. We had already gained some height in the landscape, and the views continued to improve as we pressed on up the wider, more well defined roadway to the windmill. (Something quite momentous and thrilling happened around this point but I’ll explain more in my next blog post.) 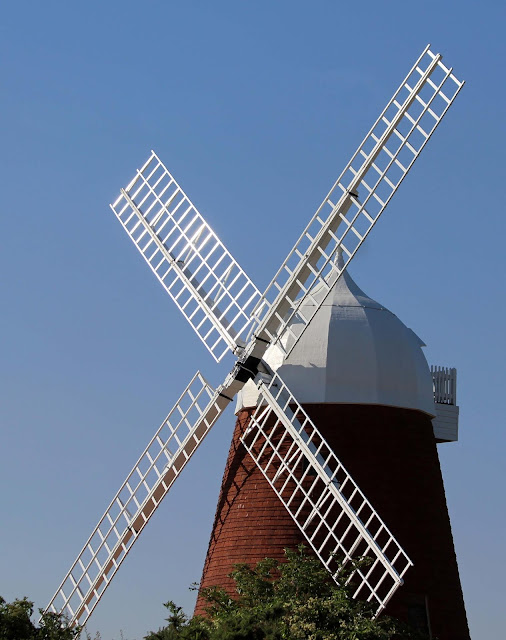 The top of Halnaker (pronounced Hanaker – the L is silent) Hill is a scheduled ancient monument as Neolthic people once constructed a causewayed enclosure here and, in more recent times, a World War Two observation post (for radio direction-finding) was also built here. But it was the windmill we wanted to see.

The first recorded windmill on this site was built in the 16th century, for the use of the Duke of Richmond’s local Goodwood Estate, though the present structure is not that old – it dates from the mid 1700s and continued to function until 1905, when it was struck by lightning.

The entry for the mill on the Historic England website explains its structure:
Red brick, covered with a thin coating of burnt tiles. Octagonal cap of beehive shape, made of sheets of metal, with finial. Sweeps intact. Fantail missing. The mill is only a shell with no internal floors or machinery. 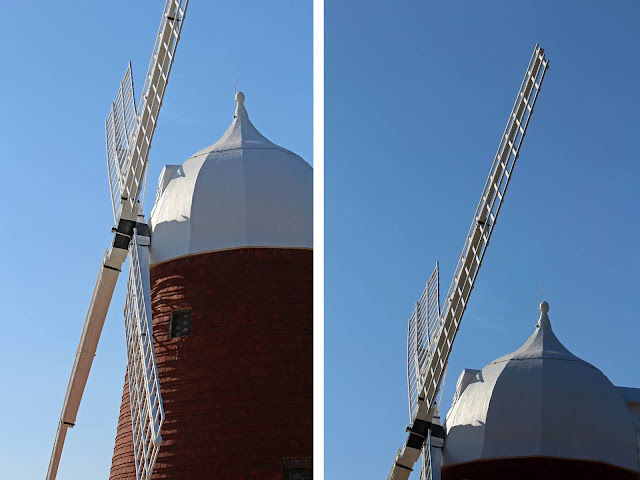 The windmill was in a ruinous state when it was first restored in 1934, then needed restoration again in 1954 and once more in 2004. And it’s still being restored. An article in the Chichester Observer of 28 June 2018 notes that its tiles were replaced in October 2017, its white cap and balcony have just been repaired and repainted, and there is a photograph showing the recent refitting of the sails – so we were lucky to see it in such fine condition, though the building was still fenced off and lacked a proper door.

It’s wonderful to see this historic structure being so well cared for and conserved. Not only do visitors get a close-up look at this wonderful old building but, from its site so high on the , the panoramic views of the surrounding countryside are amazing. Both the windmill and those panoramas are well worth the climb up the hill to see.