Inns and their signs: Dorset, 1

A few months have passed since my excellent Christmas holiday in the Dorset – Hampshire – area, yet I haven’t written up these pub signs I photographed. Time to remedy that! 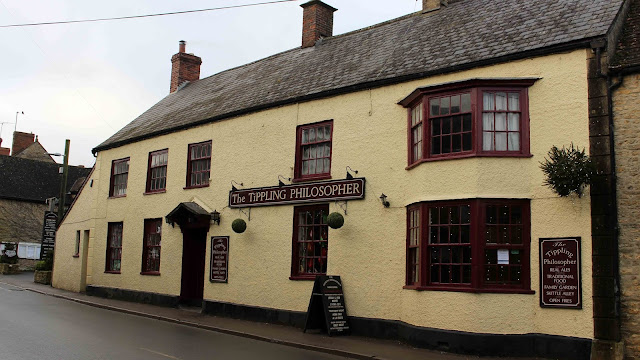 The Tippling Philosopher,
Now admittedly this 16th-century pub doesn’t have a very inspiring sign, especially considering its wonderful name, but it’s because of that name and the fact that the pub’s website actually has some good detail about its history that I’m including this one. Oh, and my friend Sarah and I also enjoyed a very nice lunch here.

To summarise the website: A tippler was an ale maker, and a local tippler was plying his trade on this very site from at least the mid 17th century. It is likely that the actual ‘Tippling Philosopher’ was one Robert Boyle, an eminent physicist, chemist and philosopher (who developed Boyle’s Law  and whose father Richard Boyle, 1st Earl of Cork, owned much of the land around It seems Robert may have spent his evenings in this very alehouse, pontificating on his theories of life, the universe and everything. (The website has even more fascinating snippets of history if you’ve a mind to know more.) 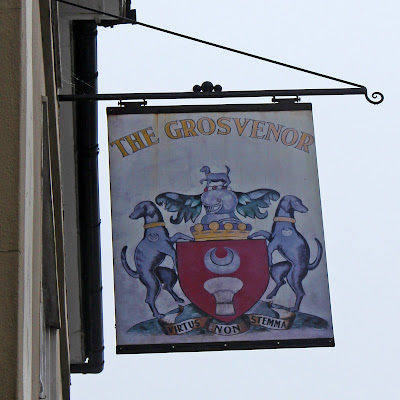 The Grosvenor Arms, Shaftesbury
Though there has been an inn (previously named The Red Lion) at this location since the medieval era, the current building is elegant Georgian, rebuilt and renamed The Grosvenor Arms when purchased by the Grosvenor family in 1820.

The hounds supporting the shield are Talbot dogs, which were introduced to as hunting dogs by the .

The George, Sherborne
The sign claims that The George is the oldest pub in Sherborne and that may well be true, as the British Listed Buildings website states that the building may date from the early 16th century, when it formed part of Becket’s Chapel or Hospital. The building has since been much altered, though it retains enough of its original features to maintain its Grade II listing. The sign shows a very well drawn version of the traditional story of St George slaying the dragon

The Half Moon, Sherborne
Unfortunately I’ve found no information about The Half Moon. The building looks old, though not as old as many in Sherborne town centre, and I assume the inn is named after its location in . The pub’s sign also appears modern but I like its stylistic simplicity. 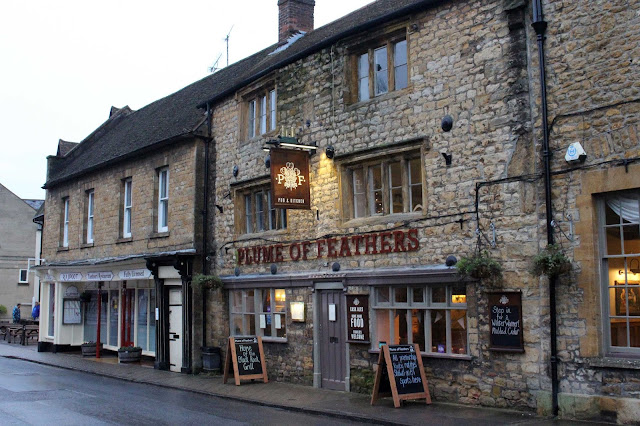 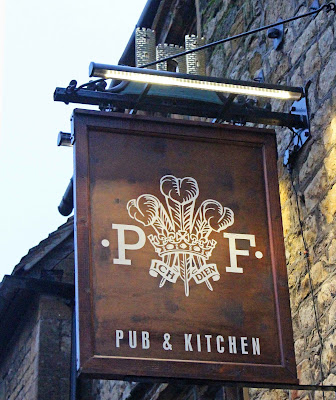 It is a building of two parts: the left side of three storeys retains its 16th- or early 17th-century stone mullioned windows, while the right side, of two storeys, dates from some time in the 19th century.

The plume of feathers symbol, and its accompanying motto Ich dien (I serve), can be seen adorning many British pubs, and is in common use in many other contexts: it can be seen on the reverse of the old 2 pence coins, it’s the logo of the Welsh Rugby team, and, of course, it’s the official badge of The Prince of Wales. You can read more about the origins of the badge here. 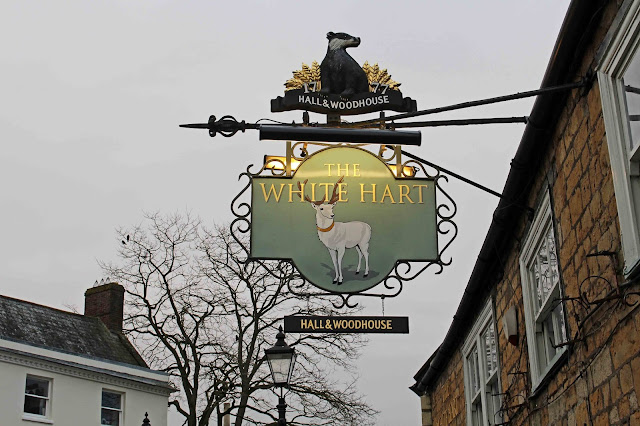 The White Hart, Sherborne
Like the plume of feathers above, the white hart is another very common inn name – the fifth most popular, in fact, and another that’s associated with royalty. The white hart was the personal badge of Richard II, and the creature itself (a leucistic adult male ) has a long and interesting place in Celtic and later Christian myth and history. Sherborne’s White Hart is set amongst a row of Grade-II listed buildings in the very heart of that historic town, and looks a very nice place to enjoy a glass or two.