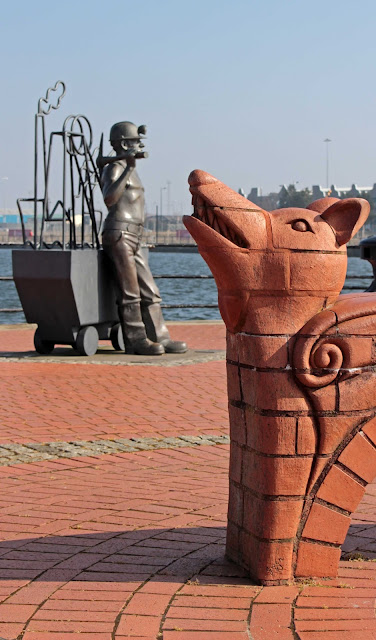 Cardiff is blessed with some rather lovely public artworks, none more so than the Beastie Benches, a series of nine carved brick benches that can be found in the Britannia Park and Quay area that runs along two sides of Roath Basin at Cardiff Bay.

These are the work of Welsh sculptor Gwen Heeney, a ceramics expert who specialises in working with brick. Her raw materials, the terracotta bricks, came from Dennis of Ruabon, the very same brick and tile company that supplied the decorative panels for the Bay’s iconic Pierhead building more than a hundred years ago.

The Beastie Benches are aptly named. The Beasts were inspired by the mythical creatures brought to life in ‘The Ballad of the Long Legged Bait’, one of the most well-known of famous Welsh poet Dylan Thomas’s poems. It’s a very long poem, too long to reproduce in full in this post, but here’s a link if you fancy a read.

The poem’s subject matter has been much discussed by critics since Thomas’s early death in 1953 at just 39 years of age. With allusions to literary and scientific works and the Bible, with plays on words and multiple layers of meaning, it may describe Thomas’s own voyage through life, it could be about a series of sexual experiences and their consequences, or it may relate to the search for salvation through the mortification of the flesh.

Heeney has taken lines and phrases from the poem and allowed her imagination to transform these into the mythical creatures that now provide a welcome place to sit on a sunny day. The names of the benches are fascinating enough in themselves: The lured fish under the foam; Sing and howl through sand and anemone; Thrown to the sea in the shell of a girl; Venus lies star-struck in her wound; Bird after dark; and the laughing fish; In the continent of a fossil; Turns the moon-chained and water-wound Metropolis of fishes; and There is nothing left of the sea.

I dare you to sit on one of these and not be inspired to write your own poem or paint a vivid picture.