Having been around for about 200 million years, the gorgeous ginkgo (Ginkgo biloba), possibly my favourite tree, is a living fossil. It was flourishing when dinosaurs roamed the earth!

It has probably survived so long because it was considered sacred by Buddhist monks, who cultivated the tree near their temples. It also has no pests or diseases, and individual trees can live for as long as 1000 years.

The ginkgo is unique, with a fan-shaped leaf like no other tree – the shape of which accounts for its common name of Maidenhair tree, and with a fruit that smells like human vomit. Despite this revolting fact, the Chinese cook and eat it, and they use the seeds to make medicine which is supposedly good for the brain.

According to the Kew Gardens website, the first ginkgoes were planted in around 1760, and one of the very first still survives:

Perhaps the most well known tree of this species is the ‘Old Lion’ west of the Princess of Wales Conservatory. This was one of the first of this species to be planted in , dating back to at least 1762 – less than 40 years after the first specimens had been introduced to Europe from . It is one of the few trees at remaining from the first botanic garden started by Princess Augusta, George III's mother, in 1759.

As you will see from the photographs included below, I fell in love with this avenue of ginkgoes in Bute Park when I first moved to Cardiff four months ago and I’ve been photographing it regularly ever since, both for the vibrant green of its summer foliage and for the brilliant bright yellow of its autumn leaves. I am also drawn to the geometric lines of the planting, and the lovely building at the end is the perfect focal point. (The people who frequently appear on the benches, where I have also spent many a happy hour, are an added bonus!)

The building is now the Anthony Hopkins Centre, named for the famous actor who studied here at the Royal Welsh College of Music and Drama, but it was originally the Castle Mews, built in 1874 to house the horses and carriages of the Marquis of Bute, who then lived in Cardiff Castle (which sits at the other end of the avenue across an old canal). After the horses moved out, the Mews buildings were used to house estate workers, and later Cardiff Council’s equipment. Though the Council failed to maintain the property, the College resurrected and restored it after leasing the buildings in the 1980s.

The History Points website says the avenue had been planted with trees by 1880 and originally featured two rows of trees each side (the extra rows were later removed). But those original trees weren’t ginkgoes – the beautiful trees we see today were planted as recently as the 1950s, chosen by the Council’s Chief Parks Officer Bill Nelmes to replace the previous trees.

The ginkgoes are now one of the highlights of the magnificent and even feature in the park’s revamped logo. Apparently, ‘The shape of the gingko tree is used to represent Bute Park as the “green heart” of Cardiff and the stylised castle and castle typography used to reinforce the importance of the relationship between the two sites.’

Long may Cardiff Council continue to recognise and care for these gorgeous green treasures! 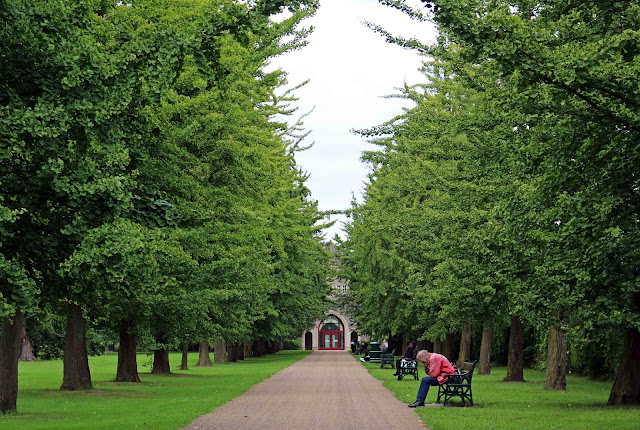 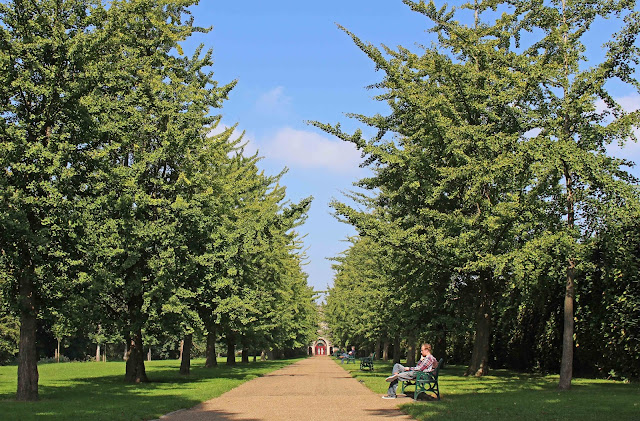 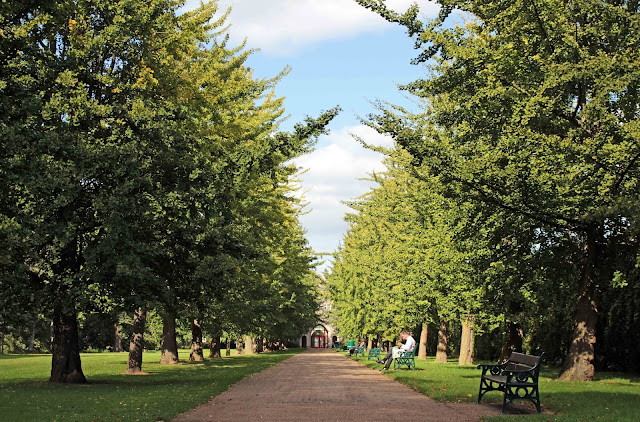 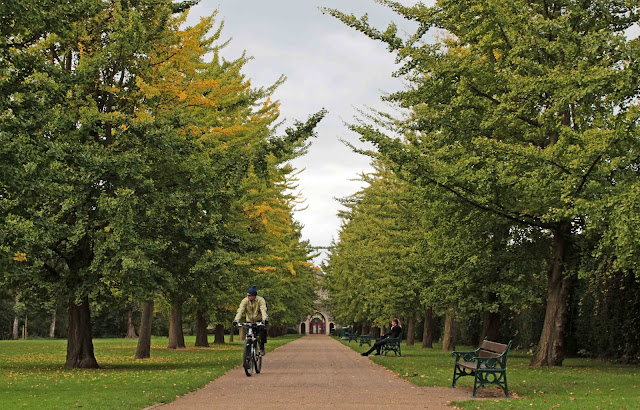 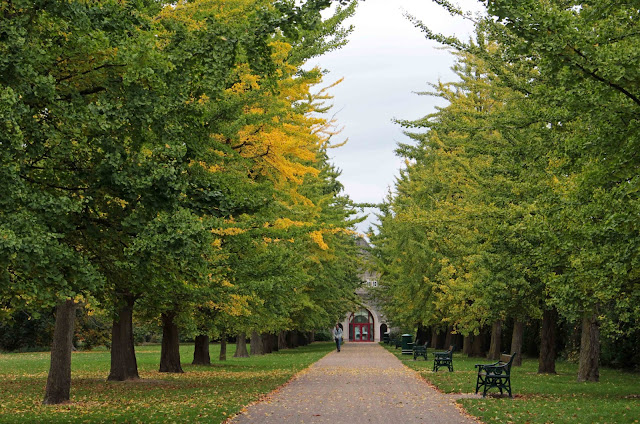 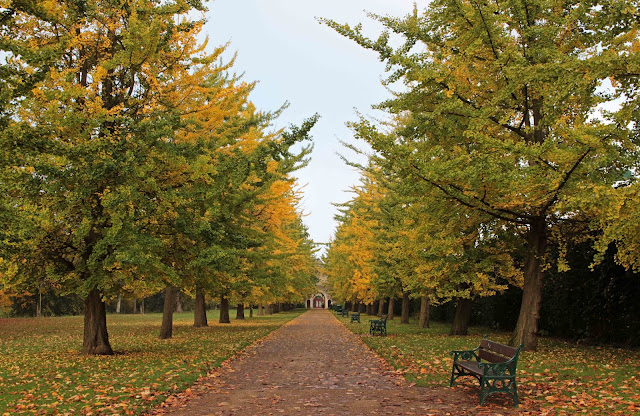 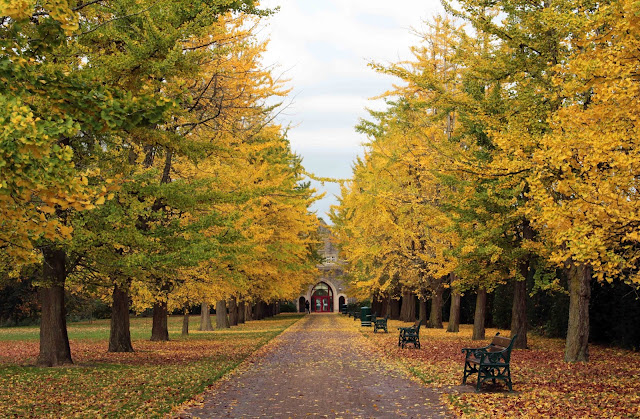 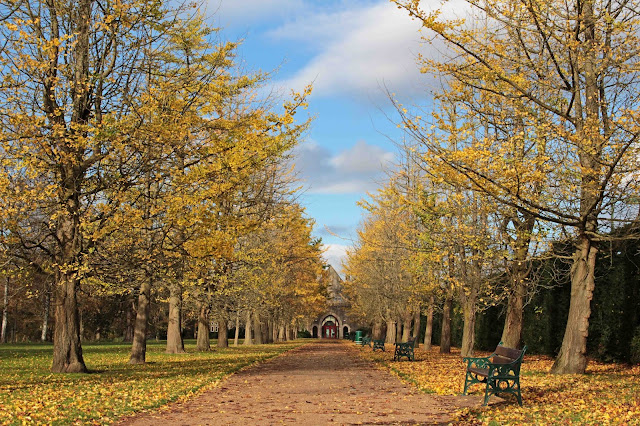 Do you love trees? Then you might like to look over my previous months’ celebrations of trees by clicking on the following links: January (one particular favourite), February (about lime avenues), March (on the subject of forests), April (about the greening of the trees in the British springtime), May (on the New Zealand pohutukawa), June (about some of Auckland’s most notable trees), July (honouring ten wondrous trees from my international travels), August (following pathways through forests and woodlands), September (about dead trees that have been given new life), and October (the beautiful colours of autumn in Cardiff).
Posted by sconzani at 09:09