Morocco day 7: Riding a camel into the Sahara

We headed off from Midelt into the Eastern High Atlas mountains via a spectacular road that curved up through a gorge of the Ziz river. Juniper trees grew here and there amongst the rocks – once they covered these mountains. Now reforestation is underway, but with pine trees, to try to prevent erosion and combat the expansion of the desert.

We crossed the mountain range through one of only three passes that transect these mighty peaks, this one at 1900 metres absl. On the other side we passed one of the many earth dams used to provide hydroelectric power and irrigation to the local area. The water was an incredible turquoise colour and looked particularly spectacular against the ochre colours of the surrounding barren landscape.

For lunch we were having a picnic so we stopped at a small town for drinks and cake and to buy picnic fare in the local market. The mercury was hitting 40 degrees as we headed out of town and we were all wondering how Issam was going to conjure up a shady place for our picnic. But then, as if my magic, a great rift appeared in the earth in front of us, revealing a long winding GREEN valley, with houses and shops, schools and mosques bordering the vivid green, fertile land on either side of a river. 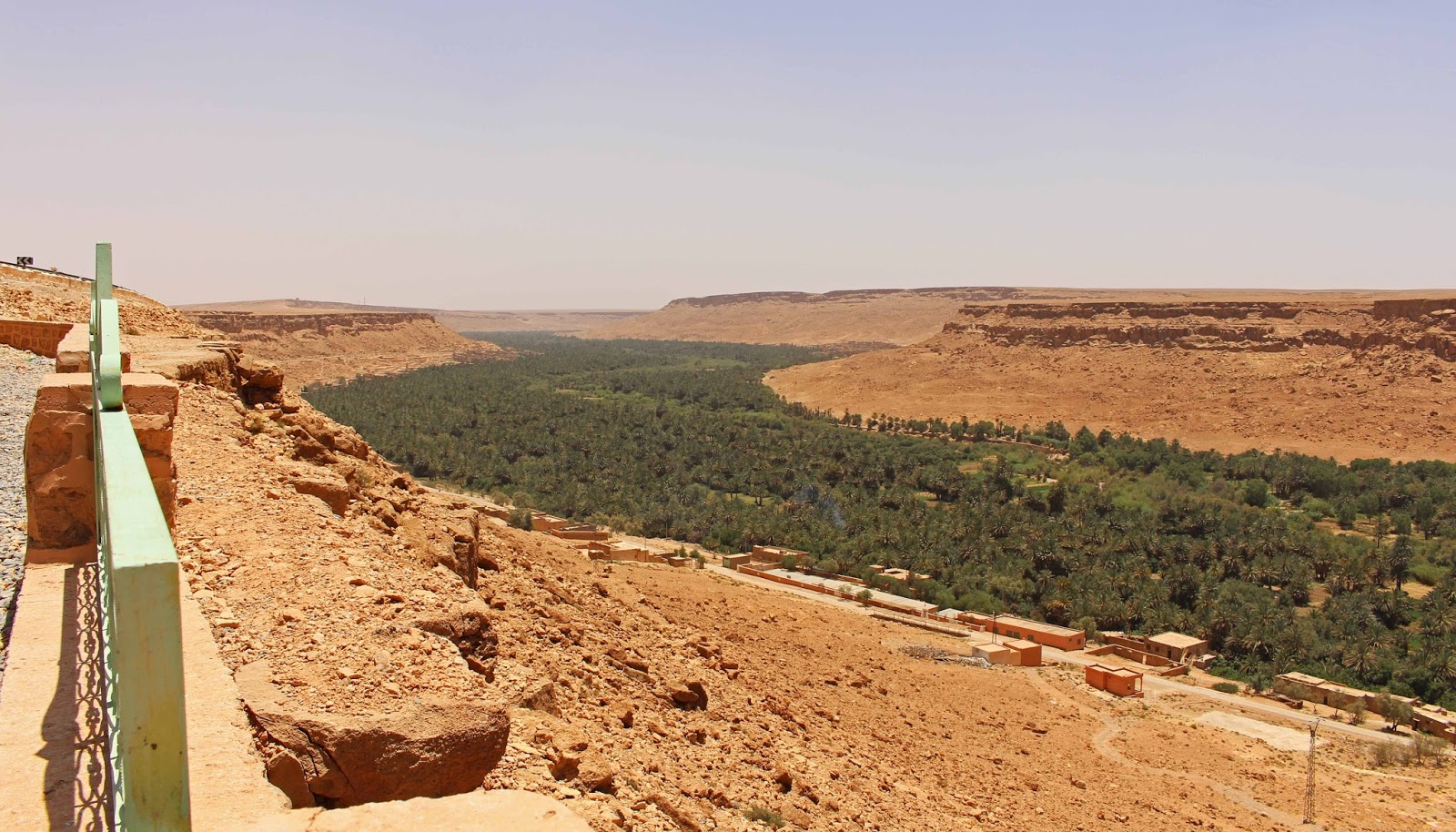 This was the Oasis du Tafilalet, an 65,000 hectare area, registered on the Ramsar list as a wetland site of international significance as it is ‘an important wintering site for migratory birds’, ‘hosts remarkable populations of Ruppell’s Bat … and of the Sand Cat’. 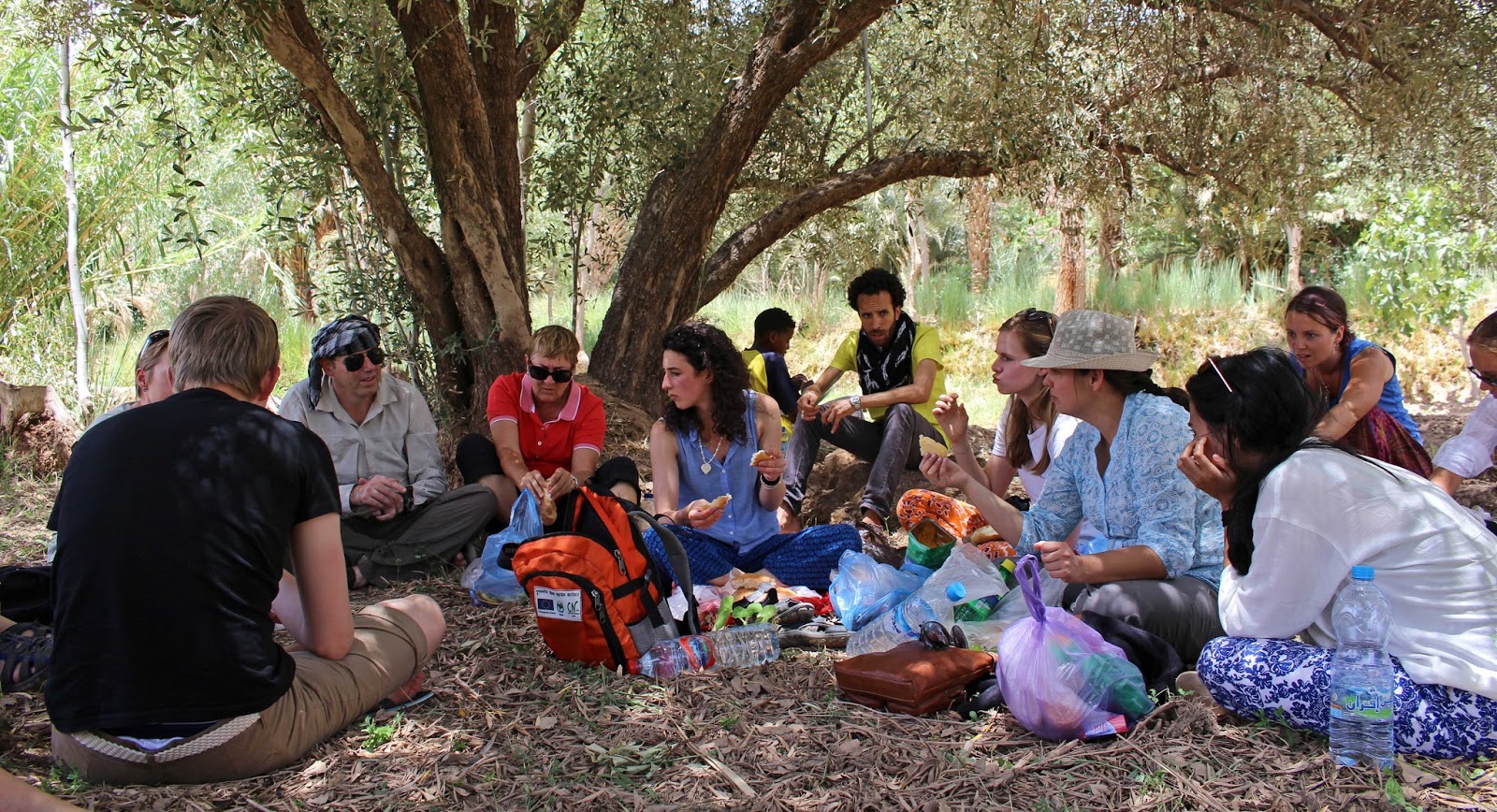 We stopped at the top of the escarpment for some photos, then headed down into the valley and found ourselves a shady spot under olive trees and date palms to enjoy our picnic. We still had some travelling to do to get to the desert but didn't want to arrive too early as it would be too hot to ride. So, we stopped at a lovely hotel, seemingly in the middle of nowhere, to enjoy cold drinks and chill by their pool for an hour or so. The place was more luxurious than any of our lodgings – how the other half live! 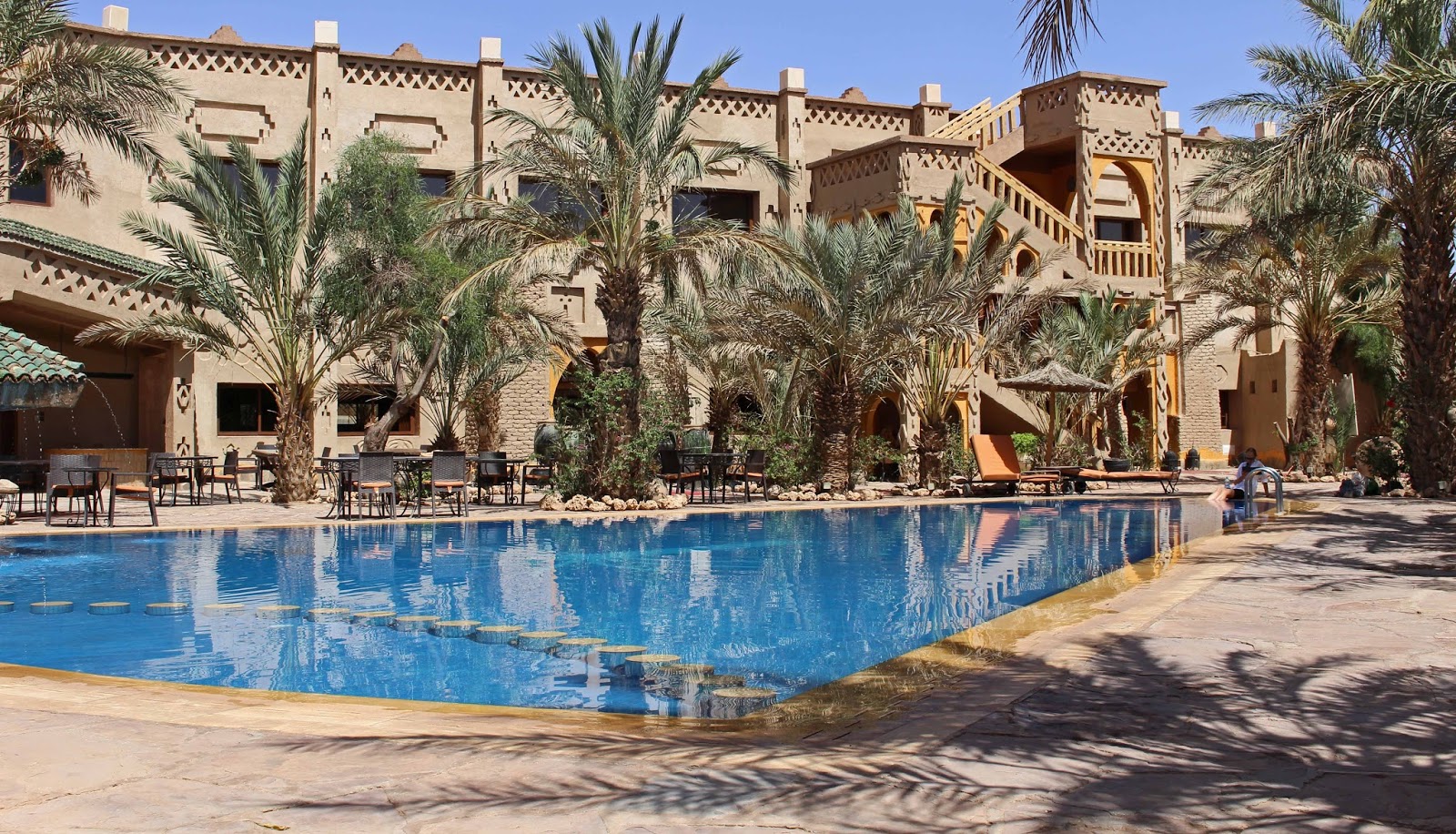 Then it was onwards towards the desert, passing many nomads’ tents and their large flocks of sheep and goats, before heading into an ever more barren and stony landscape and then, finally, we could see red sand dunes rising in the distance. We all grew more excited as those dunes grew closer, as we saw our first local camels by the roadside, as we approached the auberge where we would leave our luggage, as Issam wound scarves around everyone’s heads to make them look the part, as we picked up our saddle blankets and headed for our camels.

I felt a little trepidation – after all, a camel’s back is a long way from the ground and it was many many years since I had ridden even a horse, let alone anything so tall! In fact, the most difficult thing was swinging my leg over the beast’s back – after that, it was a piece of cake, as long as you remembered to hold on tight and lean back when going down hill, or rather down dune.

The camels were all castrated males, the oldest about 16, and well used to carrying tourists on the one-hour trek into the desert. My camel had been named Bob Marley by a previous tourist and a placid sure-footed beast he was, fortunately. He was also trustworthy enough to be placed in the lead position of one of two lines of camels, with each being tied to the back of the beast in front and a guide leading the front camel. 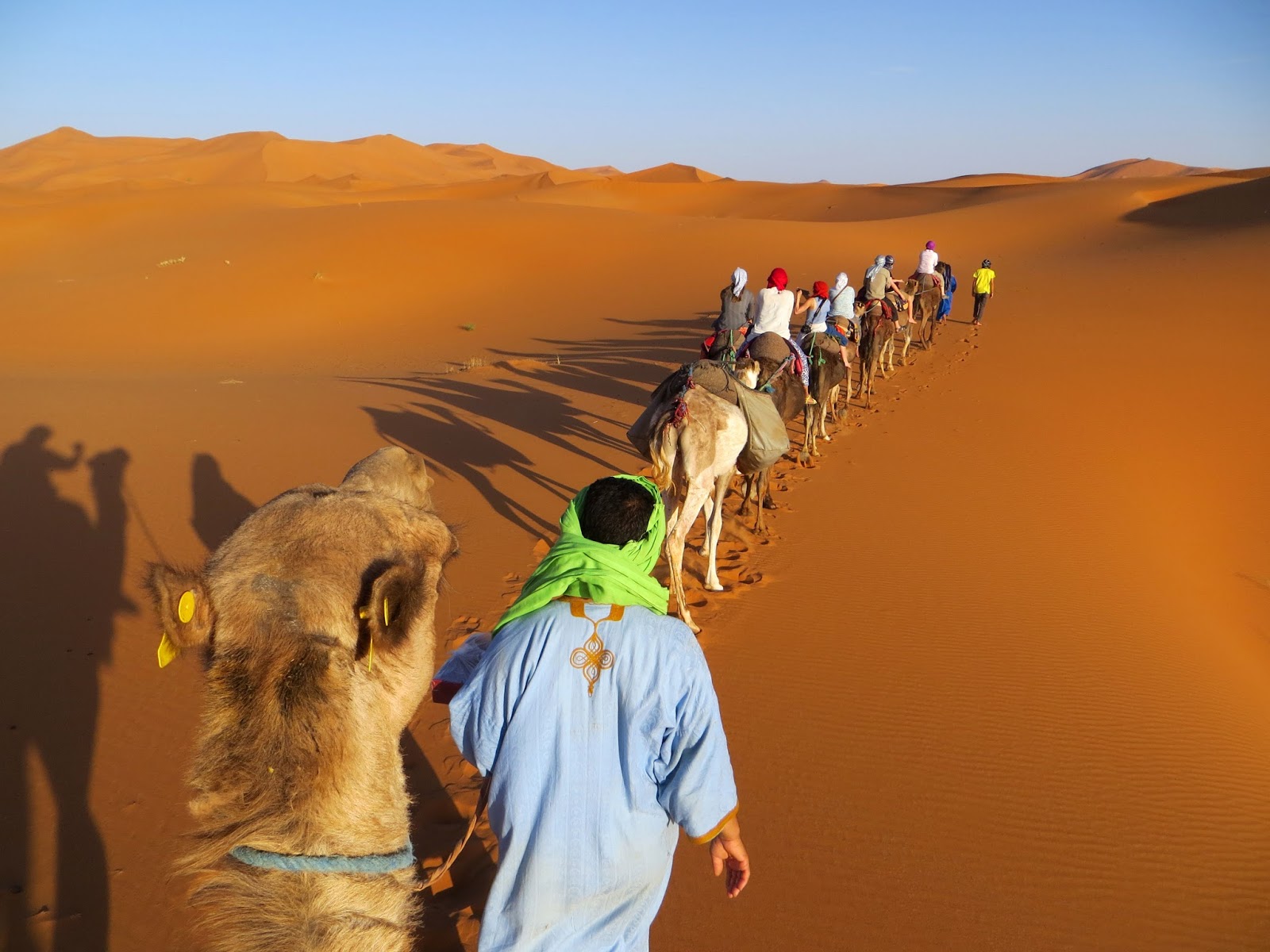 The swaying movement was interesting and the saddle blankets very necessary – most of us still suffered from a little soreness in the nether regions for a couple of days – a camel’s hump is not very soft to bump against! Not having stirrups also meant I had pins and needles in one foot by the time we reached our camp but what an experience! The colours and the patterns of the sand on the dunes changed continuously as dusk approached and it was easy to imagine that you were in the middle of nowhere.

Our camp was a group of black tents, like the nomad’s use, arranged around a central courtyard where we ate a delicious dinner of lamb tagines, were entertained by our guides singing and playing the drums, and ate cake to celebrate my cousin Julie’s birthday. What a place to be on your birthday! 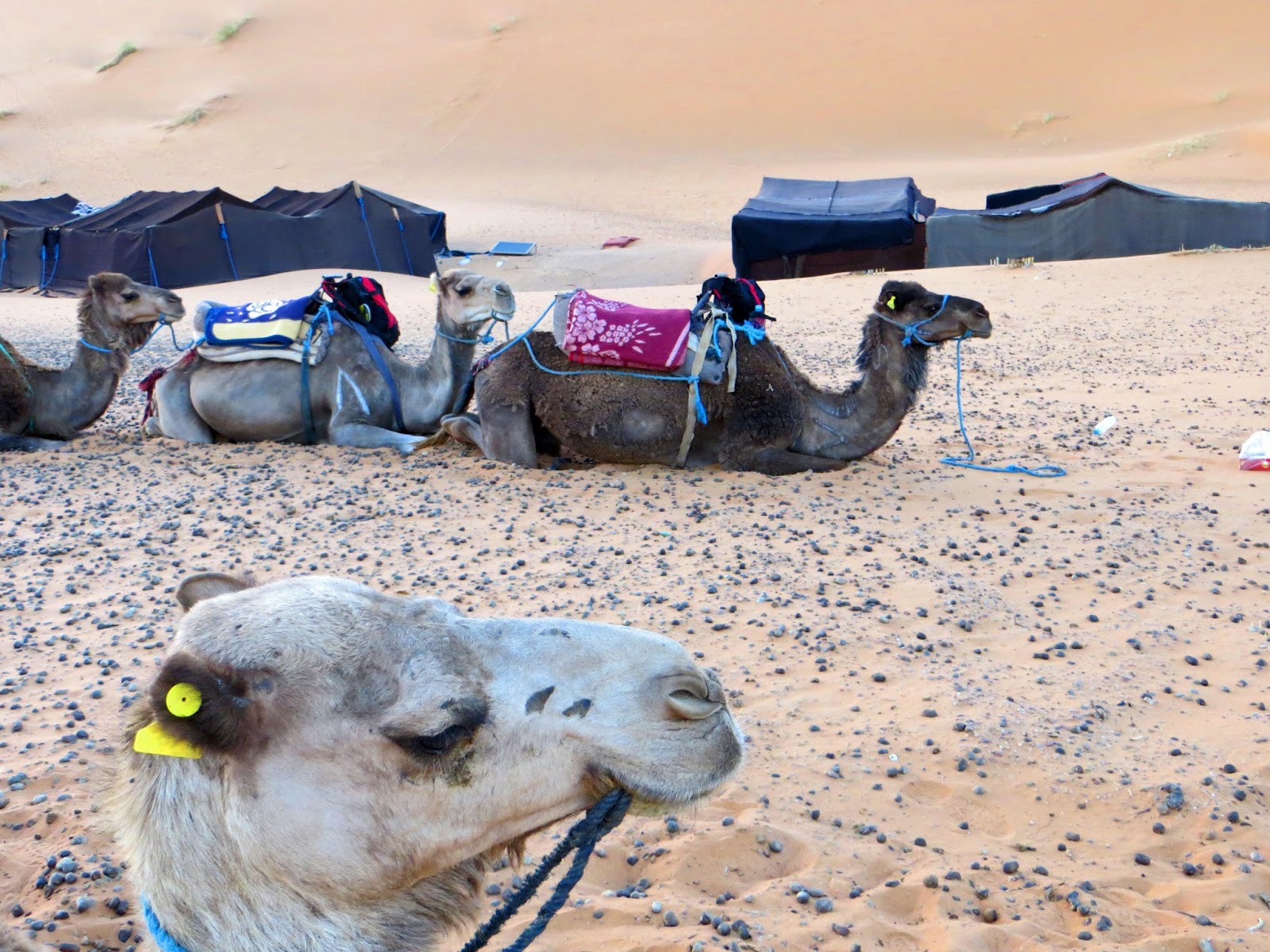 About 11.30pm, the tables and stool were cleared away, the mattresses and blankets brought out, and we made ourselves a bed, some venturing outside the camp to sleep on a sand dune under the stars, some bedding down in the courtyard, some in the tents. The stars were certainly intensely bright away from the lights of civilisation and we spotted some satellites and shooting stars but I couldn’t keep my eyes open very long. It had been another magical day in !
Posted by sconzani at 09:31