Sihanoukville: sun and sand, with a touch of sleaze 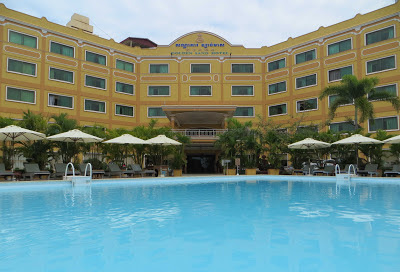 Our hotel, the Golden Sand, was rather grand looking from the outside but inside was rather ordinary. The bathroom didn’t have a shower per se, but was instead a wet room – i.e. there was a shower head attached to the wall and a drain in one corner. Fine in principle, but not in practice. It simply meant the floor of the bathroom was almost constantly wet, making it difficult to put your clothes on without them also getting damp, and we got wet feet every time we needed to go in there. The breakfast buffet was excellent with a huge variety of taste temptations – full marks there! The wifi was intermittent and occasionally showed a login screen in Russian – just shows who the majority of guests were! 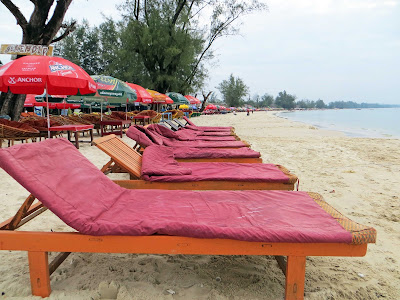 We were a short walk from which, to me, at first sight, was horrifying. Being a New Zealander, I am used to mile upon mile of sandy shore, with plenty of space between beach-goers, who carry along their own beach umbrellas and chilly bins and rugs and picnics. Not here! The beaches in Cambodia are more reminiscent of European beaches, where restaurants and bars compete for space above the high tide line and each have their own tables, chairs and deckchairs lined up in front, almost down to the water. 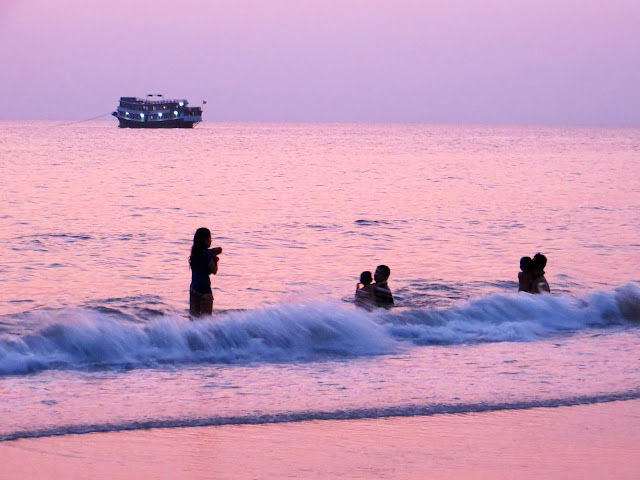 So, you can quite easily end up check-by-jowl with some disgustingly huge beer-bellied male, offering a meal of his German sausage to a pretty young Khmer woman waitress – yes, we did actually overhear that conversation! We also saw many an older Western male with extremely young-looking local girls –and I don’t even want to imagine what their relationship was. I was, at different times, ashamed, embarrassed and disgusted with my fellow Westerners who have brought their low morals and obscene habits to a country where extreme poverty forces some people to do things they would never otherwise dream of doing. 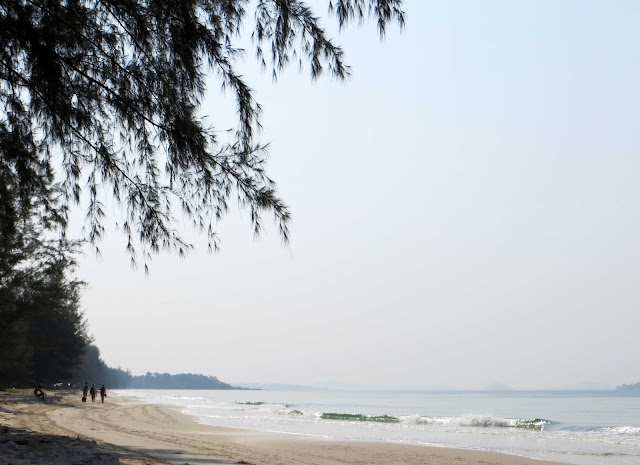 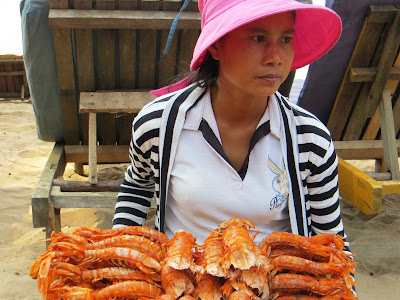 However, don’t let these things put you off visiting this beautiful place. is 5 kilometres long – I know, we walked every inch of it – so, if you just keep walking, you will reach a point where only the local people enjoy themselves frolicking in the warm waters or, even further, to where you almost feel like you have the beach to yourself. And there are several other beaches to vary your days. Serendipity is just the name for one end of Ochheuteal, and is full of restaurants and guesthouses but no golden sandy beach, so a place to eat, drink and sleep but not to swim. Outres is a mini Ochheuteal, not as long, not as crowded, but certainly just as beautiful. is even quieter, though one end is reserved for guests of the resort hotel built there. And is the same – a blue-uniformed guard blows his whistle at those beach-goers who dare stray on to the sands reserved for those wealthy enough to stay at the Sokha Resort. 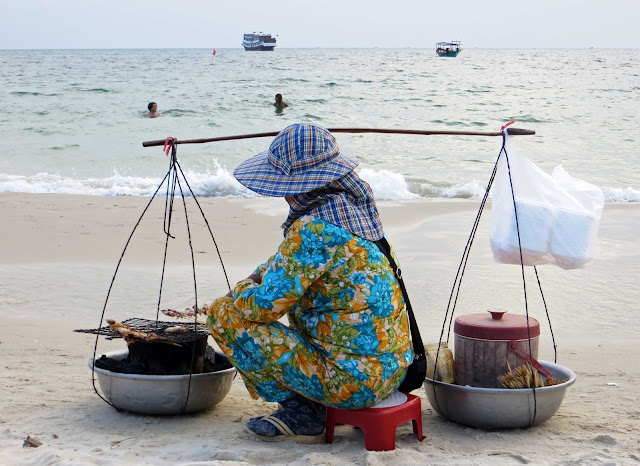 You can eat and drink well at any of the beach-side restaurants and bars for a relatively small amount of money. Happy hours that extend for several hours and offer two-for-one cocktails are the norm, so it’s no wonder drunkenness is rife! Most bartenders make a mean margarita; many, but not all, mix a spicy Bloody Mary – all for about US$2.50. A simple chicken and vegetable fried rice would cost about the same, freshly barbecued seafood or chicken perhaps US$4. There is also no shortage of women wandering the beach, with huge trays of cooked seafood or fresh fruit precariously balanced on their heads. Others carry raw food and a lit brazier at each end of a long pole, supported on their strong shoulders, and cook the food at your request. 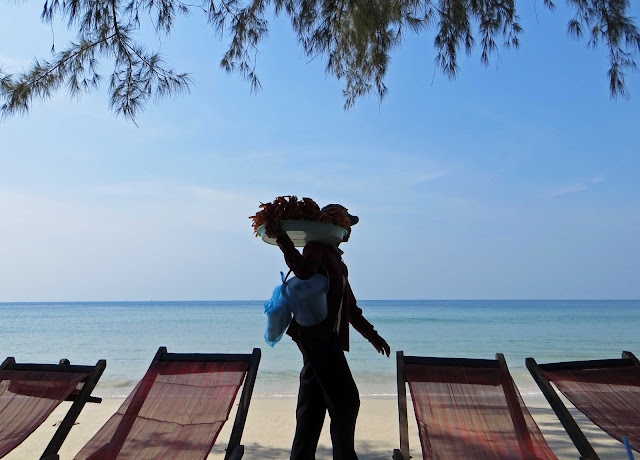 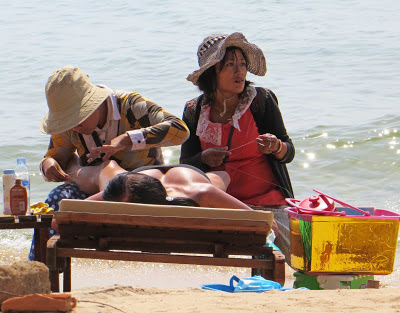 Many other traders sell their goods along the beachfront as well: sunglass hawkers, souvenir sellers and women who will give various parts of your body a massage, provide manicures and pedicures, and even thread your legs free of any stray body hairs! After a couple of cocktails one evening, Marianne and I both enjoyed foot massages and had our toenails painted bright purple.

Last, but most certainly not least, the sunsets at these beaches are to die for! Whether by accident or design, there are usually half a dozen of the local wooden longboats moored offshore, making for striking silhouettes against the lowering sun. Combine this with a long cool cocktail enjoyed while lounging in a deck chair at the water’s edge … bliss!

Sihanoukville may have its critics, and it certainly does have an element of sleaze, but I would have no hesitation in returning to its sandy shores. 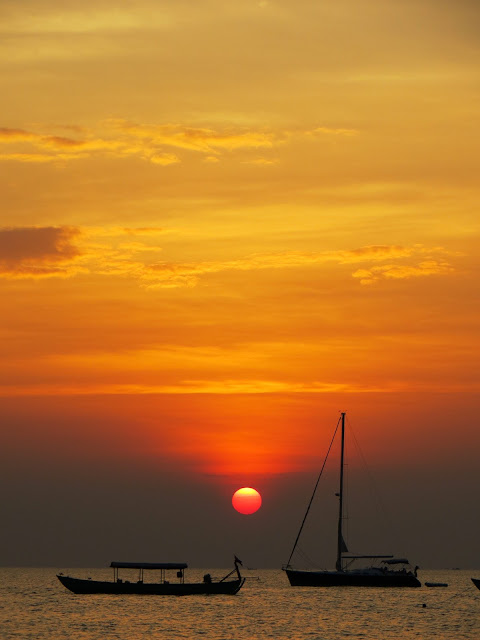 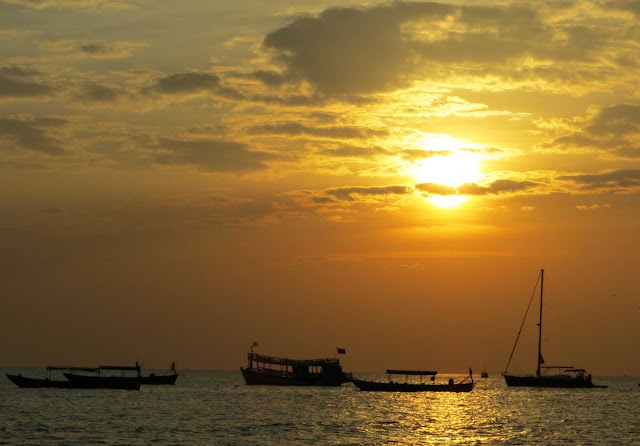