Nazca day three: the lines, the pyramids and the aquifers 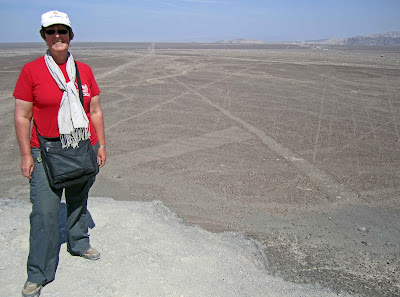 The lines! The lines! I’ve seen the Nazca lines! Not a lot of them, as most are only visible from the air and there was no way I was going up in a small plane and vomit for half an hour to see them, no matter how amazing they are.

My tour guide Jeffrey picked me up at 8.30am and we headed north along the Pan American highway. First stop was a natural hill by the roadside, the place from which many of the actual lines originate, in particular the one that marks the line of the sunrise on the mid-winter solstice. The Nazca desert is littered with heavy rocks – heavy with various minerals, which is part of the reason the lines haven’t been destroyed over time. The lines were made by clearing pathways of varying widths and depths (to a maximum depth of 30cm) of the surrounding rocks – and the lines are as long and straight as I’ve read about.

From the hill, you can see only lines, one rectangular area and a few small circular formations of larger rocks, which may have housed ceremonial fires. Unbelievably, the Pan American highway has been built right through this magnificent place, bisecting lines and, as I saw later, one of the figures – the head of the lizard is now separated from its tail.

From the first viewing tower, not far from the hill, I could see three of the figures very clearly and close up, the tree and the hands and the dismembered lizard. The tree (the local name is huarango) was particularly distinct and was perhaps 20 metres long, relatively small when compared with some of the other figures but still impressive.

Continuing up the Pan American, after about 15 minutes we turned off to the second tower. Here we saw the human-like figures of a hunter with a bird in his hand, and a family group of mother, father, two children and, set slightly apart, a baby. Strictly speaking, these are not Nazca figures, as they were made by the people of the neighbouring Paracas culture and were made by heaping up stone to create the shapes, rather than taking them away. Fascinating! But what a time for the zoom on my camera not to be working. 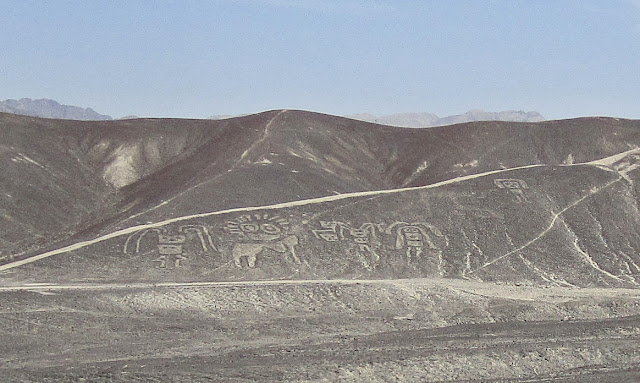 For some obscure reason – lost in translation! – but I gather something to do with soaking in the energy, Jeffrey made me breathe in deeply at each of these places (or was this just an excuse to touch my arm, shoulder, tummy?!).

The other Nazca figures passed unseen from the car, though the low-flying planes buzzing overhead marked their positions as we retraced our steps back to the outskirts of the city, then turned inland and sped like rally drivers along 13kms of dirt road across more sandy desert to the pyramid complex of Cahuachi. Within a 24 km2 area lie the remains of 36 pyramids. This site is where most of the exhibits I saw yesterday in Antonini’s Museum came from. These are adobe brick pyramids and were built to house the dead and for ceremonial purposes. As Jeffrey put it, the Nazca lines were an open temple to the gods, and the pyramids are closed temples to the gods. 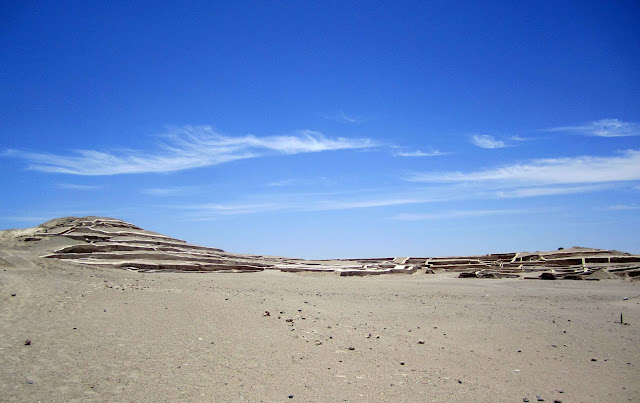 We couldn’t approach the most significant pyramid as part is still being excavated and part is being reconstructed – not sure if I agree with that process but it does give the visitor a better idea of the pyramid’s structure. Just walking around the exterior, we were walking atop adobe walls, could peer into huge grain silos sunk into the sand and see the holes where two enormous clay water jars would have sat – both the silos and the jars would have stored excess supplies in times of plenty, as insurance against times of scarcity.

The most amazing thing for me though, as a history geek, was to walk up and down the ploughed furrows of a field below the pyramid and, with minimal effort, turn up shards of beautifully decorated 2000-year-old pottery, including part of a cat’s face, a fragment of a spider and various geometric designs. I was so tempted to take a couple of pieces (and, as these will probably never be collected for museum display or any other purposes, it would probably have been acceptable) but, out of respect for the site, left my finds in the earth from whence they had emerged. Jeffrey was impressed with my decision – he said most tourists just take what they find. 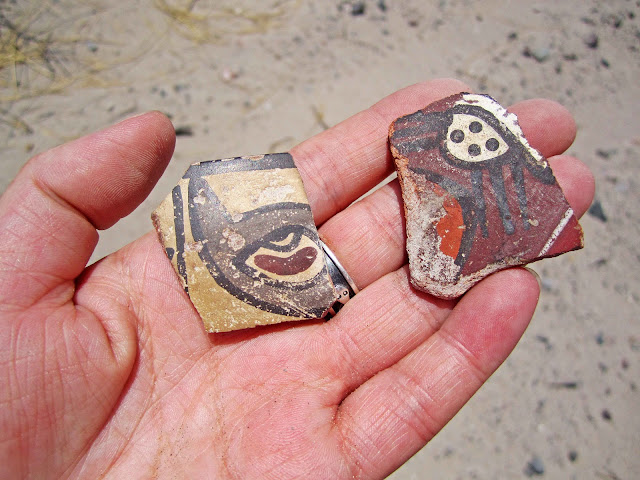 On the way to this site, while speeding over the lumps and bumps of the dirt road, and on the return journey, Jeffrey sang me romantic songs, not something any man has ever done before! It was a very sweet, if a trifle bizarre experience.

Our last visit of the day was to the aquifers, the Nazca civilisation’s version of the Roman aqueducts and their answer to the droughts that have plagued this area for millennia. There are several of these aqueducts running from the mountains down into the city, most of which are underground but still accessible every so many metres by spiral pathways built down into the ground. The spiral shape is not just for ease of access but also serves to funnel air into the aquifers, partly to cool the water and partly so the people who ventured into the underground portions of the tunnels to clean them could breathe more easily. Most of the length of the aquifers is underground to prevent evaporation of the previous liquid and all are constructed along a curving, snaking path, rather than straight, to slow the flow of the water. The channels have stone-built sides, 2 metres tall, which have survived the frequent earthquakes that rock this area, though no mortar binds them. Jeffrey told me it is this very flexibility that makes them strong and tremor resistant. 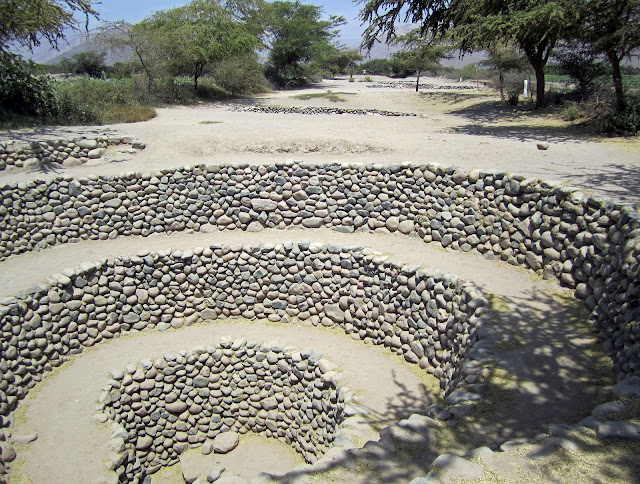 What was most delightful was the bird life that perched in the trees that ran along the line of the aquifers’ route – sparrows, doves, one small darting bird of brilliant red, a tiny brown humming bird and many others sang to their hearts’ content which, together with a wall spilling over with the vibrant colours of bougainvillea and a pleasant cooling breeze, created a near idyllic scene. I could easily have stayed longer.

The last snippet of information I gleaned before we headed back into town was concerning the field next to the bougainvillea wall, which was filled with cactus. This variety is grown for the insects which live on and in them, as the insects produce cochineal. There was a piece of paper on the ground which a previous tourist guide had smeared with insects, producing the distinctive colour to show his tourists.

Jeffrey wanted me to spend the rest of the afternoon with him, eating and talking, but I declined. He was a very nice man and I would definitely recommend him as an excellent tour guide but I was a little uncomfortable with his increasingly amorous attention. I wasn’t afraid of his intentions, it’s just that I haven’t been used to a man paying me that sort of attention in recent years and, as I was off back to Cusco that evening, there seemed no point in encouraging him any further. He certainly made my trip to Nazca more fun and interesting!

Back in town, I ate a late lunch, then sat under a shady tree on a bench in the plaza, writing up my notebook, people watching and very much enjoying not being constantly pestered by shoeshine boys and trinket sellers, as would have been the case in Cusco. It had been a wonderful long weekend, full of amazing sights and incredible ancient culture. Thank you, Nazca and Jeffrey for your hospitality!
Posted by sconzani at 01:47