Breakfast on day two was at 6.30am – positively late! – but the cold shower had shocked me awake. Our first lodge had electricity but no hot water, whereas our second lodge had hot water but no electricity – this was the jungle after all!

After breakfast we had a short walk to spot more birds and to listen to worms chewing a log of wood – I kid you not! Apparently these worms are a delicacy the locals like to eat. Our van then picked us up for a 30-minute ride towards the port of Atalaya.

On the way we passed a burnt-out house and Abraham explained how it had happened. Two local men had raped two girls, aged 12 and 15, and murdered one of the girls. Six police came from the city, but they were unable (and perhaps unwilling) to prevent the mob justice that followed. The mother of one of the girls poured petrol over one man and set him alight. He died of his burns two days later. The other man somehow managed to escape the same fate and is now in jail. The villagers also torched the offenders’ house to purge the village of their evil. 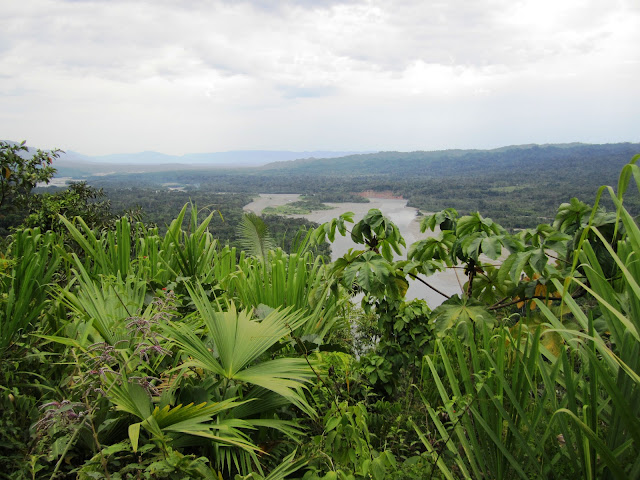 As we travelled on, we had frequent views of the Madre de Dios river through the trees, but before we reached the river port we stopped at an orchid sanctuary. A local man who is passionate about orchids has collected more than a thousand local species and proudly gave us a tour of his jungle garden. The flowers were magnificent, as was the small troop of saddle-back tamarind monkeys who scampered through the treetops above us.

At Atalaya we boarded our covered outboard motor boat and headed down the Madre de Dios River for approximately 30 minutes towards the Sago de Oro Lodge where we were to spend the next two nights. It was lovely being on the water and we spotted a red deer on the river bank as we puttered past.
While we settled in to our rather primitive but comfortable lodgings, Isidor prepared another delicious lunch. After eating we relaxed around the lodge for a couple of hours, exploring the grounds, delighting in the humming birds sipping nectar from the many flowering bushes, enjoying the view from the seat above the river bank, listening to the leaves fall.
A thunderstorm rumbled overhead but the rain that fell was refreshing and didn’t prevent us from heading out mid-afternoon to explore. Wearing rain jackets and ‘plastic’ boots, we boarded our boat and headed down river for about ten minutes, then walked for another 30 minutes or so along a jungle trail. Once again, Abraham spotted birds for us to view, sometimes close by, sometimes far off through the powerful telescope he always carried. He also told us about the special plants we passed, explaining their medicinal properties or use as food for the local Indian people.

Eventually we arrived at Machu Wasi Lake, where we climbed aboard a small wooden raft and, with Abraham acting as our gondolier, we sailed slowly and silently around the lake. Once again we were treated to sightings of many birds.

My favourite was the particularly weird Hoatzin, many of which were roosting on trees around the lake. These are primitive creatures: they ruminate like cows, make evil hissing noises when approached, emit bad smells to scare away their enemies, and have prehistoric-looking claws on their wings to help them scramble among the branches. We also saw a capybara, a large semi-aquatic rodent, though only at a distance.

We climbed to a platform high above the lake as dusk fell, searching for the elusive mountain toucan. Abraham had identified one calling and tried to lure it closer by playing a recording of its call, but it wasn’t playing ball. But then as we headed back towards the river, we were treated to a brief sighting in the tree tops nearby. We were also lucky enough to spot a small group of dusky titi monkeys before it got so dark that we had to turn on our flashlights. 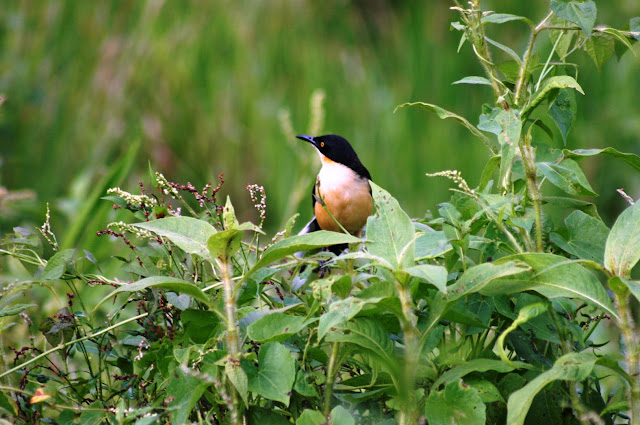 And as we neared the river, we stopped at a small lagoon where we spotted the gleaming eye of a small caiman almost hidden amongst the reeds. When we turned off our flashlights so as not to scare it away, we found we were surrounded by fireflies twinkling amongst the trees. It was magical!

The trip back up river in the dark was exciting as we had to navigate several sets of rapids. Obviously our boatman had done this several times before as we arrived safely back at the lodge to enjoy a splendid candle-lit dinner, good conversation and lots of laughs. By 8.30 we were all exhausted and headed off to bed. It had been another incredible day!
Posted by sconzani at 04:49