“Khnhom koeu tmat (I am a vulture),” shout the kids, as they proudly wheel and carry their giant red-headed vulture puppet around the inner city streets of Siem Reap, their little faces beaming with pride, their smiles wide and bright.

The Giant Puppet Parade, held in Siem Reap every February for the past seven years, is the culmination of months of planning and three weeks of intensive workshops, with kids from local NGOs and staff and volunteers from around the world helping to build the giant puppets, designed by the parade’s artistic director and master puppeteer Jig Cochrane. And this year I was privileged to join in the workshops.

Firstly, let me stress, these are indeed giant puppets – this year’s vulture is perhaps 30 feet long when all its bits, from top of beak to tip of tail, are laid out and, if extended outwards, the wings would flare out approximately 20 feet. And they are made up of many pieces – the vulture has at least 15 main parts, as well as many feather panels that have been added to its body or were flapped about by excited children on parade night. 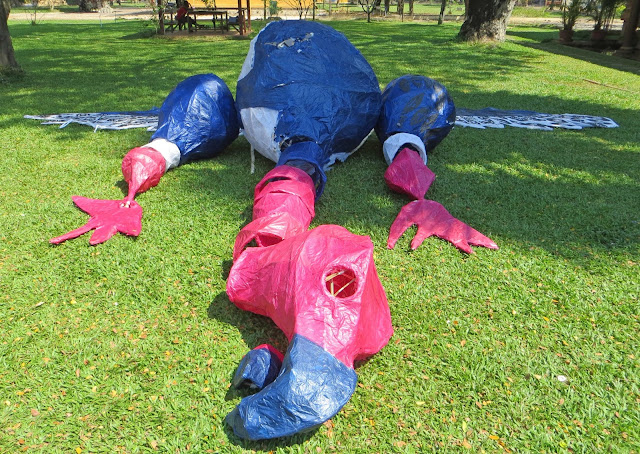 And the vulture is not the biggest of the puppets, which this year include the Asian cobra, a porcupine, two frogs, the slow loris, a bee and a stingray, as well as our red-headed vulture. These creatures are all endangered and one of the ideas behind the parade is to raise awareness of the rarity of the creatures, both with the general population and with the children. Where possible, the workshops include a talk to the children about the creature they are making and the creatures are also profiled on Facebook. 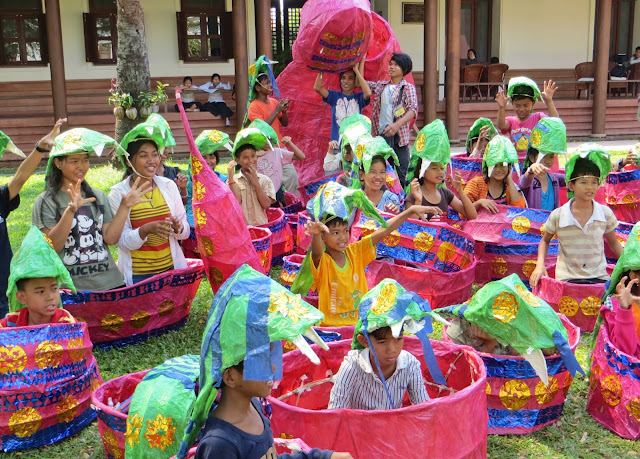 As well as educating people about the rarity of these beautiful creatures, the Giant Puppet Parade aims to foster creativity and artistic ability, in the artists and volunteers who come from overseas to volunteer with the project, in the young adult artists from the Phare Ponlue Selpak Art School in Battambang, who help to lead the workshops and, most especially, in the young Cambodian children who take part in the workshops. 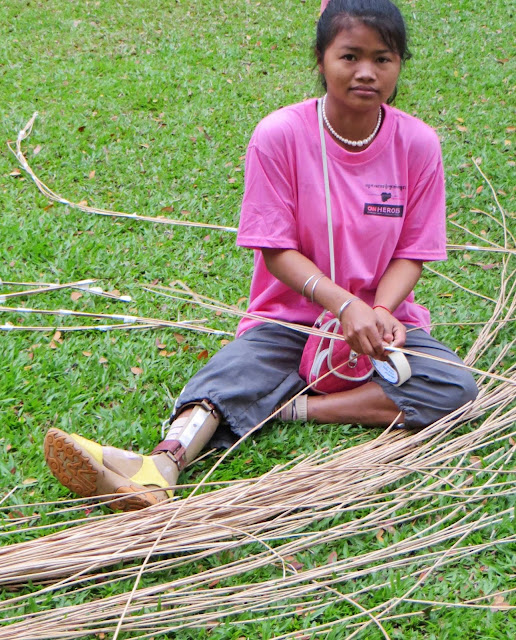 This year, children from the projects run by 16 local NGOs took part in the puppet-making process. They were mostly from within Siem Reap city, though one group travelled an hour from their rural village to take part, and they ranged in age from perhaps 7 or 8 to their late teens. Some had worked on the puppets in previous years, others were first-timers so needed more help, and all were just wonderful to work with.

The kids taking part in the first weekend workshop came from the Landmine Museum Relief Centre, and many had been the victims of landmine explosions. Some had missing or artificial limbs, some limped badly, but all were happy, constantly smiling and laughing. It was humbling and inspiring to see how well they coped with their disabilities. As well as encouraging their creativity, the Giant Puppet Parade helps to shine some light in their otherwise dull lives, to let these kids enjoy some much-needed fun and excitement.

And the workshops themselves? Each session began with games – Jig is also a master showman and motivator, and very good at creating the right atmosphere, getting people warmed up and the kids laughing with games like “Zip. Zap. Boing.” Then the puppet making began in earnest, starting with Scotch tape to fasten two or three pieces of rattan strips together. These are the basic construction materials of the puppets and the barrel shapes we then built with these strips are the basic building blocks. The barrels can be small or large, thin or fat, and can be added to to make larger structures, like the heads of the vulture and the cobra. We used globe shapes in the same way – circular strips were taped together to form circles, with more and more circles added to strengthen the whole thing. 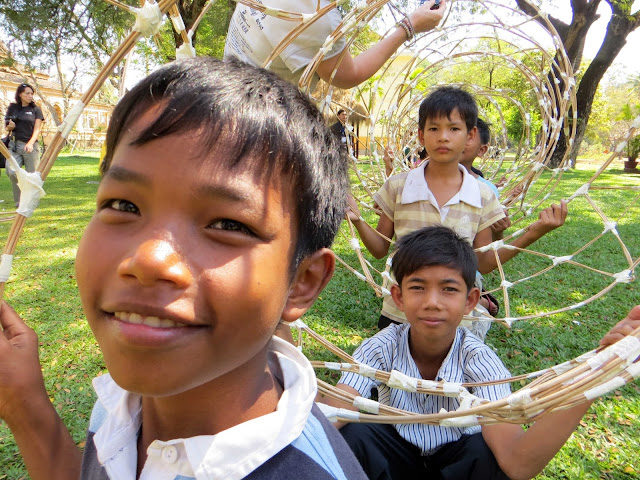 Next, the kids taped sheets of various colours of tissue paper over the rattan. Then, the whole was smothered in glue – we used industrial strength PVA diluted with water – and more paper added, to cover the Scotch tape, to intensify the colour and to further strengthen the structure – the glue hardens as it dries. 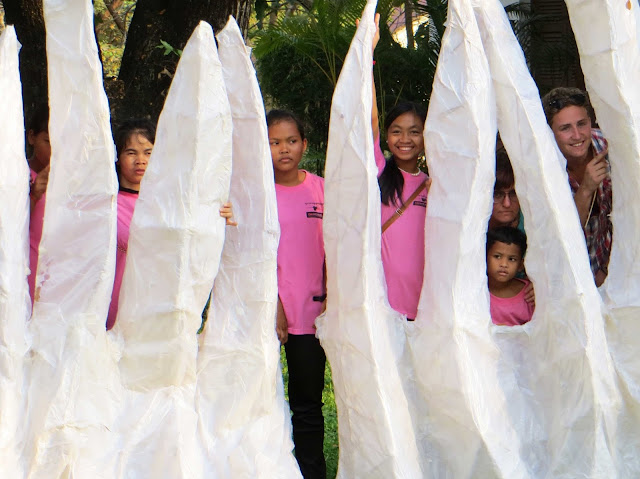 These structures were decorated in a variety of ways – the kids cut slices and slivers out of pieces of square, circular and rectangular metallic paper to make snowflake and doily designs, then glued these on to the shapes.

The porcupine, for example, was basic white, with plain black circles and squares and gold metallic strips stuck on. It’s a very effective way of decorating the whole and the creatures looked stunning when assembled and lit up from within.

Following the week of puppet-making workshops with the NGO kids was another week when staff and volunteers put the finishing touches to the puppets, fastening together their pieces, adding the moving parts, sound and light, and mounting some on platforms and wheels.

On the night of the parade, the kids and staff from their NGOs, guided by the project staff and volunteers, wheeled, lifted and pushed their brilliant creations through the streets of Siem Reap in a haze of wild excitement. This year’s puppets were bigger and better than last year’s, more people came to watch the glorious parade, and the project was a stunning success – a shining example of how a community arts project can provide a creative platform for disadvantaged children to foster and promote self-confidence through art.

I didn't actually get to see much of the parade myself as I was roped in at the last minute to act as number 2 puppeteer on the Hanuman puppet (one of two puppets with their roots in Khmer culutre) and we were the teaser, dancing around at the head of the parade, playing with the crowd, helping build the excitement and anticipation for what followed. So, I'm already planning on being in Siem Reap next February so I can see it all again for myself ... and maybe help out with the puppet making again, too. It was such a brilliant experience. Why don't you come too? 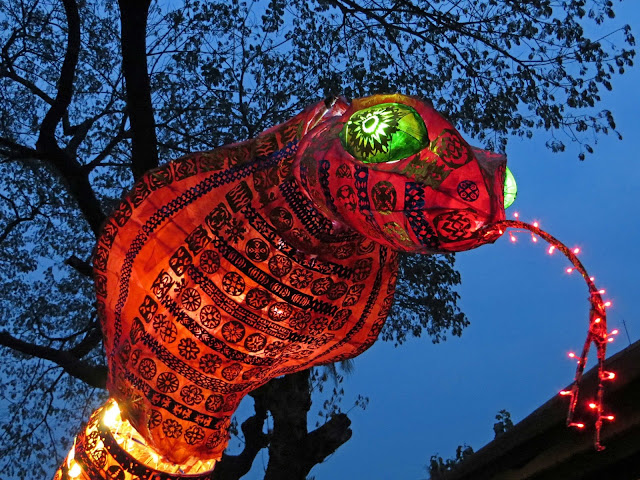